so back in 2019 I bought a second hand Jet 16" bandsaw, which after some tweaking performed ok for about 6 months - then the electrics cut out, which turned out to be a burned out motor.

So after asking around, found a locla supplier who 'rewound' the motor, (£185), which got me up and running again.

What with Covid and everything else, didnt use the machine much until this year, and having spent some time fettling it so it was cutting straight, and was all set up, was getting some use out of it - then disaster struck - the motor burned out again.

So i called the company who re wound it before, but they are snowed under with work and cannot touch it, so went searching for a replacement.

so its a single phase, 4 pole, 1.5hp motor, with a 19mm shaft and face mount - pretty straightforward you would think ?, absolutely not !

so far replacement motors are being quoted at roughly £700, finding someone to re-wind it (again) - £450.

I know a 'new bandsaw is anywhere between £1300 - £2000 depending on make, model, but thats the ballpark for something comparable.

Have spent what feels like forever emailing sompanies to find a replacement, or someone who can rewind the motor, and the majority just dont even reply, so now beginning to wonder - do i need this, is it worth the time and effort.

Not sure where you are, but a 4 pole TEC single phase cap start and cap run motor is around £200 delivered. I use TEC motors a lot as they have proved to be extremely durable and well balanced.

However, there are probably two faults with your machine you need to fix before replacing the motor, the first is that there is either missing or incorrectly set / incorrect sized over current relay that protects the motor from burning out. Secondly, something is causing the over current, ie the motor is stalled and cannot get up to speed quickly enough. There could be lots of reasons for this, but something isn’t right. You need to identify it before fitting a new motor.
T

Maybe a daft question but is TEC a brand or type?

A brand of motor
K

TEC - they may do good motors but dont do customer service - took three weeks to reply to email, then responded with a quote for the wrong type of motor, and wrong shaft size, (I had spec;d that when i contacted them).
We went round in cirlces for another two weeks, until they quoted me £300 for a face mount single phase, 4 pole motor - however you cant mount the face plate, )the holes are in the wrong place), and the shaft is still the wrong size - their answer, point me at a distributor - which i went to, and simialar response, with the quote arriving this morning for £658 inc vat for a motor with a reworked shaft.

based on the service alone - I wouldnt touch TEC with a barge pole, thats my view, based on my experience, others may have different views, experiences.

I'd not be too concerned about finding that exact motor, as it seems a bit underpowered.
Depending on your electrics, should you have a CU and suitable cable, then I'd go bigger.

Not sure if there is much reason to seek a 4 pole motor, not ever read of any benefit,
apart from RP claiming lesser chance of tripping the breaker.

The shaft would be larger on a bigger motor, well say a 3hp one likely.
I'm sure someone here could give you a link or even tell you what size you need, should a cheap motor show up.
Taper lock pulleys might be worth looking up if some cheap sound motors lying around too cheap to resist.

the face plate is set onto the frame, so a foot mount wont work unless the mounting plate is considerably larger and an L shape - which gets you into the land of trying to get something fabricated that would meet the needs.

If the shaft is different it means sourcing and mounting suitable pulley wheel for the shaft that will take the same size belt as current,

both of which jack up cost...

You need a 80 frame motor which is rather unusual for a 1.5KW single phase motor, they are usually 90L frame. A quick google suggests that the Jet 16” saw has a 1.5HP motor which is around 1KW. I suggest you check the motor rating plate to verify exactly what KW power the motor is. 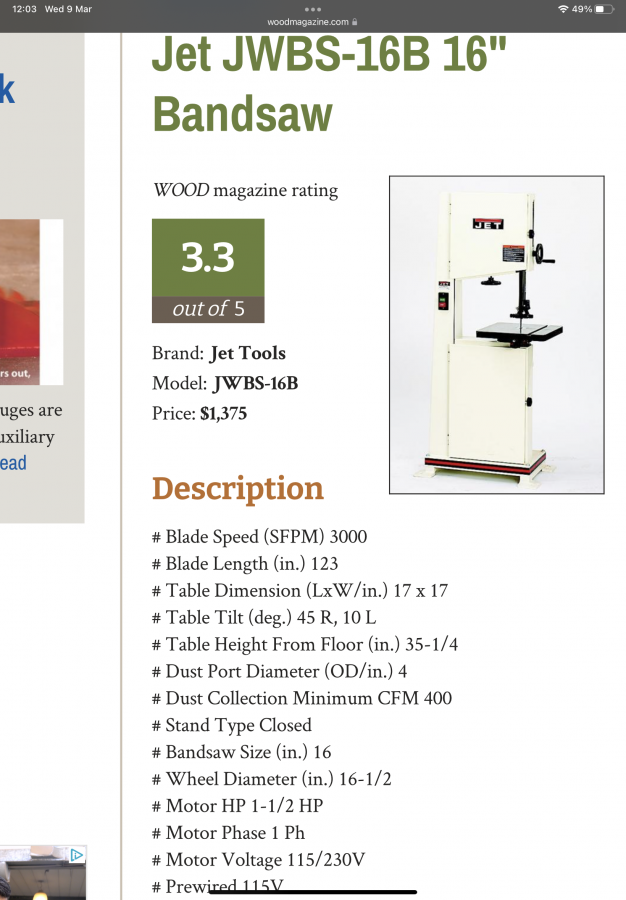 No one has asked why have two motors gone!

Ttrees said:
Not sure if there is much reason to seek a 4 pole motor, not ever read of any benefit,
Click to expand...

4 pole motors are half the speed of a 2 pole. Often the diameter of pulleys available determines the speed of the motor. 4 pole motors last longer than 2 pole due to rotating half the number of times.
Finding a pulley isn't difficult or very expensive, if it doesn’t have to be something special.
I haven’t renovated a JET bandsaw, so not familiar with exactly how they are constructed / any space issues.
Bandsaws don’t need large motors, the demands for power are not the same as a table saw for instance.
I can understand your frustrated, but we are trying to help.

It would help if you posted a picture of the motor rating plate so we can see exactly what it is you have.

I've seen both types on bandsaws, so I don't see a need to be concerned.
Not heard about wear being a factor until now!
Not knowing anything about the ratios, I guess 2 pole motors on larger machines
well on my machine anyways, it might well be down to the pulley arrangement.

I'd have an optimistic approach when looking for a motor, hoping that the seller might have a pulley or two knocking around also.
Belts are only about a fiver in an agri or lawnmower shop, and Deema has told me recently you can get sizes in half inch increments.

I too question why the motor is problematic, and IIRC that's not the first one of those
I've read about here being troublesome.

Just noting/questioning whether there is different mounting points on a face mounted motor compared to a flange mounted one? 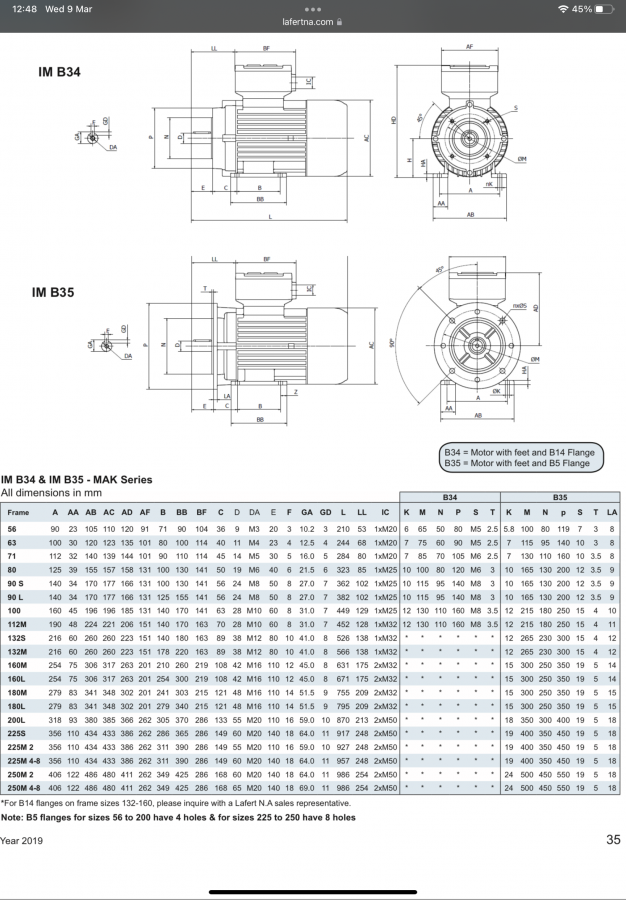 Spectric said:
No one has asked why have two motors gone!

Not so common these days, we used to run three phase dual voltage motors through invertors using the motor setup as 230 volt Delta but supplying 400 volts at 87 hertz to give about 1.7 times more power and constant torque.
N

Some photos of the motor and separately the data plate would be very helpful here. I think I asked this the last time you were trying to sort this out. Knowing whether this is a braked motor or not would be a start (I have the 20" Jet which does have a braked motor but don't know whether the 16" and 18" ones do) since this makes a big difference to the price of a replacement motor. It could also be part of this cause for burning out the motor you have (if braked).

A 1.5hp motor is going to be 1.1kW so an 80 frame 4 pole flange mount motor has a 19mm shaft so photos would help confirm whether it is flange or face mount. This is for a non-braked, cap start, cap run motor from bearingboys.co.uk
M

These budget bandsaws from e.g. record power, jet, axminster all seem to have similarities. I wouldn't be surprised if they all originate in the same chinese factory. Why not give record power a bell and see if their motor will fit.
M

That will be a 6 pole motor then!
K 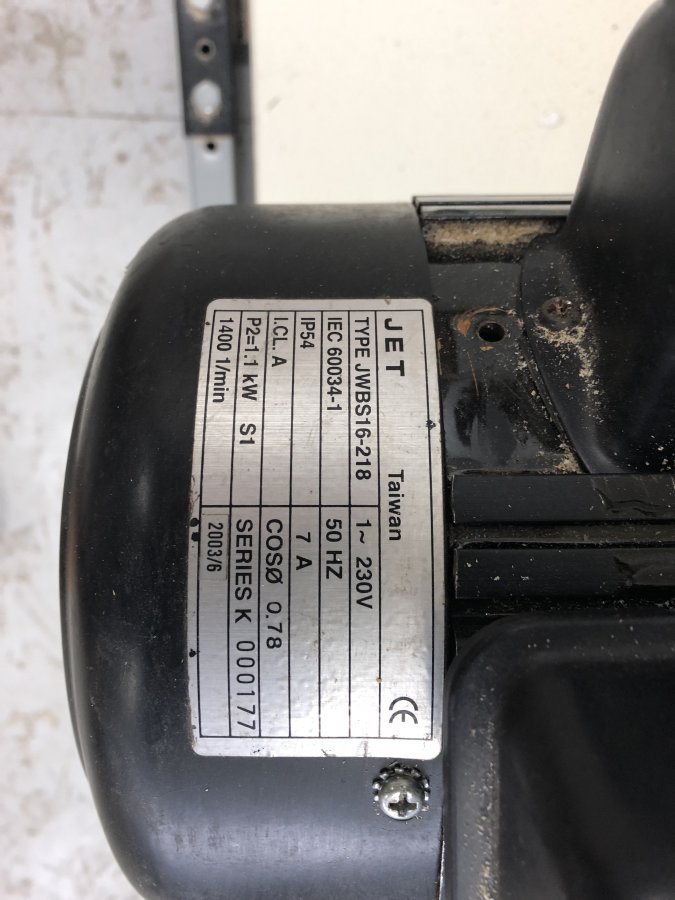 For those who wanted to see the motor plate, there you go.

FYI, and in the spirit of full disclosure, that pic was also sent to TEC when asking them about a suitable replacement

M
Problem with planer feed on my Record c26 universal