With another birthday coming up, my better half has asked what I want.

I've often thought an oscillating spindle sander would be good for the smallish stuff such as toys etc that I fiddle around with, and have found the following: 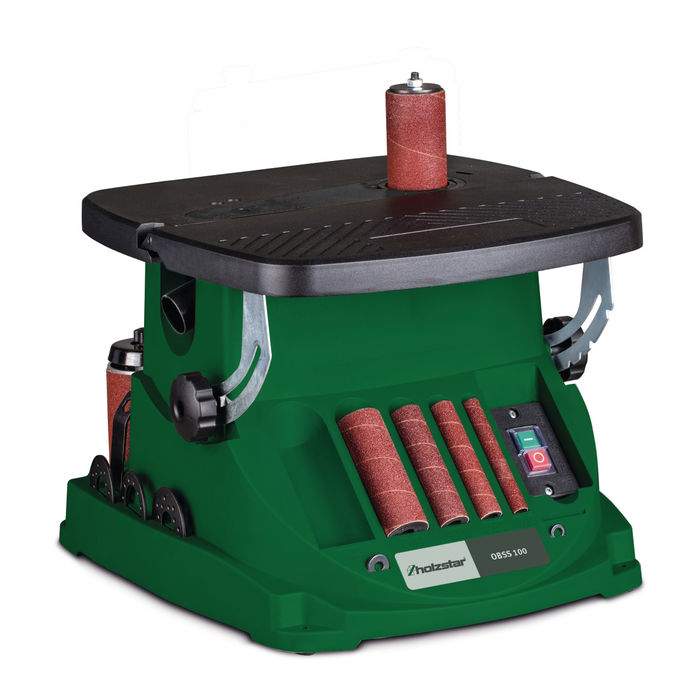 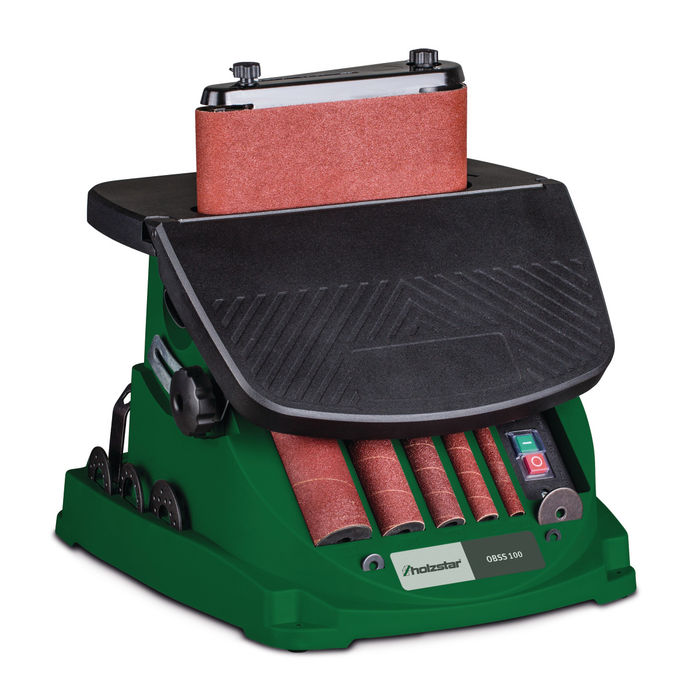 It's available from a company in Germany with whom I've had a satisfactory purchase in the past, and with a choice of 4 different diameter spindles, PLUS the horizontal belt, it looks a pretty good value for money idea to me.

I won't bore you with the whole spec (it's all in German), but with a 460 Watt motor it should have enough grunt for the smallish stuff I do, and at just over 200 Swiss Francs (about 170 quid these days I think) plus a sensible shipping cost from Germany to me, the price seems OK - even with Swiss VAT added on arrival (normally automatically added on all imports over 200 Francs, but it's only 7.9%).

Unfortunately I can't find out who the manufacturer is, but as the vendor is a Record Power dealer (that's who I got my Recvord model 400 air filter from) they obviously sell stuff which should be at least "reasonably good") so I guess this machine, even if likely Chinese in origin, should be OK. (Come to that Record air filter was made in China!).

So has anybody any experience of this particular machine, or any similar "convertible" belt/spindle machine please?

I'm particularly interested in how much of a faffle it could be to change from spindle to belt and vice-versa, but any other comments based on experience of similar machines will be most welcome.

I have the Sealy version of the same machine, it is not faffle at all to change from the spindle to the belt, as the belt unit stays in one piece and fits into a recess at the rear of the machine, the little nuts and washers can get miss-placed it you habitually move the machine around, I just keep them in a box somewhere handy. The table at 45degs is a bonus if wanting to sand at that angle, would not be without mine.

The Triton looks to be the same machine re-badged: https://www.amazon.co.uk/Triton-TSPST45 ... th=1&psc=1
T

Hi,
It appears to be the same as the Triton unit which had a fairly favourable review in one of the woodworking magazines in the last few months.

If you google Triton bobbin/belt sander you'll find reviews and you tube videos for it.

Think Triton also re badge it. There was a review of it in Good Woodworking magazine a couple of months ago but can't remember what they said.

Thanks to all for the prompt replies. It looks like definitely worth a punt for a hobbyist like me. Re the pricing, I'm not sure about the current exchange rate £ to Swiss Franc, but by the time you take off UK VAT, add on the Swiss VAT, then pay undoubtedly more for shipping from UK to Switzerland (versus the just under 9 Euros that the German vendor wants for shipping to me) then I reckon the price will end up to be much of a muchness.

Again, thanks to all, this machine (and even the idea of a convertible belt/spindle machine) was really new to me.

Cheers & "happy birthday to me" (end of the month).

You may have missed my previous post due to the echo's, but the Triton can be had much cheaper than the others with free delivery: https://www.amazon.co.uk/Triton-TSPST45 ... th=1&psc=1 but I think the Triton has a plastic table whereas the Sealy has a cast aluminium table, not absolutely sure about that, would be a good idea to check.

Thanks for that Mike, I'll check please before I set the Missus free with the card!

One further Q comes to mind - will I have to buy the abrasive loads from the vendor or are those sizes (belt and drum) freely available elsewhere?

They are all much the same, the Triton ones seem to be available for a good price in fact that is what I have as spares for my Sealy version.

AES":3i9rjb9n said:
Thanks for that Mike, I'll check please before I set the Missus free with the card!

One further Q comes to mind - will I have to buy the abrasive loads from the vendor or are those sizes (belt and drum) freely available elsewhere?

Standard sizes, available on ebay and other places.

I know the Forum has been slow of late, but it's not an empty vessel that has to echo's all the time. (hammer)
T

MikeJhn said:
I know the Forum has been slow of late, but it's not an empty vessel that has to echo's all the time. (hammer)[/quote


There were no replies when I started to type mine!
I stopped to see if I could find the magazine report before submitting. Your reply just beat mine
Sorry if others trying to help appeared to steal your thunder.

Ps. Also I note your first reply only mentioned Sealy, you edited in the Triton info after my post it appears.
Click to expand...

Frankly, never having heard of/seen such machines before I'm more than grateful for ALL inputs, however "echo-y". It wouldn't have been the first time I've dived in and bought things I later regretted, so inputs from Forum members are DEFINITELY appreciated.

Thanks to all again.

I have the record BBS1 bobbin sander, and to be honest, would not buy just a bobbin again, the belt combo is a much better idea.

Problems I have (and they may affect you as well)
The bobbin is 150 mm tall, but due to the up down action you can only sand stuff to a 100 mm. (utterly useless for the inside of 150 mm deep bandsaw boxes, which is what I bought it for.

Buying spare sanding sleeves... i cant recommend record in any way shape or form. I've lost count of the "out of stock" notices I've had. The sander has been idle for 3 months because i cant get new sleeves. I've even tried draper and sealy but no luck so far.

if you have good sanding lseeves, and if you only want to sand 50 m or so, they are very good.

OK, all noted, thanks for that sunnybob.

The buying button has not yet been pushed, but bearing in mind your 100mm/150mm restriction I think it would work well for a number of bits & bobs (sorry!) that I do.

When used for the right job it can be a really useful tool, but it can be tricky to learn, dont make your first pass on an important piece. Its very easy to push too hard and get a circular dent gouged out.

Start with the wood to the left, push it across the bobbin slow and steady, make sure the last end doesnt grab and chuck the piece at you :roll: =D>

Just realised that advice changes depending which way the motor turns

Push the wood into the rotation same as a router.

All of the Triton/Sealy versions turn anticlockwise, the belt has a stop end at the right hand side to help hold any workpiece against the sanding medium, this can be used on my Sealy version with the bobbins as well.

Saturday at 22:56
Nic_the_Urchin
N
W
Which tools should I buy - cabinetmaking and house renovation?
2