Which vintage Blockplane to get?

I'm now after a blockplane (for endgrain/edge trimming & other odd trimming jobs),
I have been checking ebay and I'm confused with all the different models there are.
I heard that I would need a low angle block plane for this sort of stuff but not sure if any of those vintage old record/stanley block planes are the low angle type?

What would you say is the best model out there for this stuff? ( considering the overall quality/feel/perfect size/ability to do the job)
J

The most common low angle one is the Stanley 60 1/2. Later ones were numbered 060, I think, and it has a lateral adjuster whereas earlier ones didn't.
J

For specs on all of them go here http://www.supertool.com/StanleyBG/stan0a.html

There are always some on the bay but get one with a cast cam lock, you can tell these as they have a yellow sticker on the cap.

Friedrich":1fxxv0yo said:
I heard that I would need a low angle block plane for this sort of stuff but not sure if any of those vintage old record/stanley block planes are the low angle type?
Click to expand...

You don't actually need a low-angle plane for end grain, that's a relatively modern convention. Also for shooting board ends a bigger plane is often a much better choice because the added mass helps overcome the resistance from the end grain, which can more easily stop a lighter plane in its tracks. This is why many people use a plane the size of a no. 5 in their shooting boards.

This isn't to try to put you off getting a block plane, one or the other type is well worth having and they can be very inexpensive.


Friedrich":1fxxv0yo said:
What would you say is the best model out there for this stuff? ( considering the overall quality/feel/perfect size/ability to do the job)
Click to expand...

This is really up to you more than anything, your hand size and how strong your grip is are as important as the form of the plane itself. Recentish thread with a bit of discussion on this point here.

If I had to pick just one block plane it would be a low-angle model as it's the most versatile, drop in a second blade sharpened with a steeper bevel and you convert it into a higher-angle plane in just seconds.

I'd hunt for a Stanley 60 1/2, with brass fittings if poss. A Record/Maples 060 1/2 from the 80s would be my second choice if buying secondhand. If you did happen to stumble across the Faithfull version of the same thing it's worth a punt as they can be quite good after fettling.

I got burnt twice buying LA adjustable block planes on ebay
both new Record Irwin and Stanley.
They can have twice the issues than Bailey style planes.
Of the two of them, the Stanley is slimmer by a good bit which I'd prefer as the Record/Irwin looks clunky to me.

If you choose to buy a low angle eBay one, prepare on working the azimuth error out of the bed if
you do have a skewed iron.
And be careful on lapping the sole as it needs to be parallel with the mouth bedding.
Hopefully it will have a uniform sole thickness

Starting to find the Lie-Nielsen a bit heavy for the fingers, although I also might have found a Stanley to be sometimes.

Block planes tend to be the Miscellaneous File of the plane world. If there's a job that doesn't feel right for a bench plane then you'll often pick up the block plane instead. In reality I find they get used for two very different groups of tasks, and indeed you suggest as much in your question.

The first group is "trimming" tasks. This can be things like flushing off the overhanging edge of Formica or iron-on Melamine edge stripping, chamfering the ends of legs, or trimming back a dowel peg so it's flush with the surrounding surface. These are all jobs where a normal bench plane would feel unwieldy and, as you may be planing away from your bench vice, it's often a benefit to hold the workpiece with one hand and use the block plane single handed. If you're dealing with plastic laminates or end grain then a low blade angle is an advantage, but if you're dealing with long grain, hardwood trimming tasks then you'll probably want a higher pitch to prevent tear out. You don't need two separate block planes for this, just a second iron with a different bevel angle. I use a lot of inlaid stringing in my furniture and I'll generally use a block plane with a high angle blade to cut back the proud stringing before final flushing off with a card scraper. On delicate planing jobs like these a block plane is ideal, a regular bench plane would obscure the workpiece so you wouldn't know exactly where you're cutting. 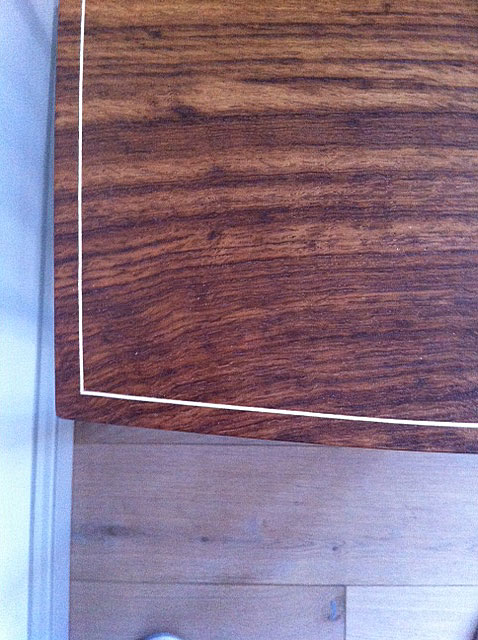 The second job that many people associate with block planes is end grain planing. But here the story's more complicated. Any experienced woodworker will admit that they'll go to almost any lengths to avoid or minimise end grain planing. It's hard on you and it's even harder on your tools. Consequently you'll saw end grain, or use a disc or a belt sander, anything in fact to minimise planing. But there's no escaping it, sooner or later you will have to plane end grain. Because it's such hard graft you'll ideally secure the workpiece in a vice and set to with the biggest bench plane that's realistic. You want a solid two handed grip and you want the heft and momentum of a heavy plane. You would prefer a low angle blade, but you'll prioritise a two handed grip because end grain planing is just so strenuous.

Unfortunately you may well be out of luck. Oftentimes you'll be faced with planing the ends of a big table top that's too long to fasten vertically in your vice. Or you'll have 65mm x 65mm table leg or bed post sections, where the end grain needs planing, and if the piece is already assembled you can't always secure it firmly. These are the worst planing jobs there are, and because I'm doing them pretty regularly I equip myself with a range of low angle planes, 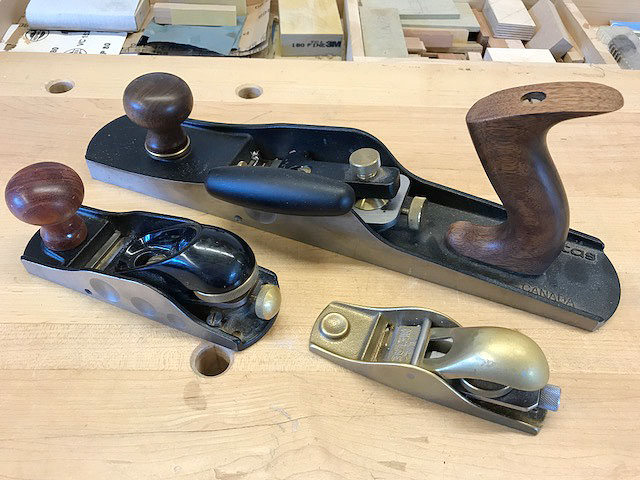 Normally I'm a proponent of Stanley and Record planes, I think the current trend towards ultra thick plane irons is a bit over done and for many woodworkers it isn't really necessary. But when it comes to end grain planing I've found that the new generation of A2 and PM-V11 steels really come into their own. It's not that traditional Stanley or Record blades can't slice through end grain, they can, but they blunt extremely quickly, which makes it even more arduous to push them through the timber, and makes an unfastened workpiece even more prone to skipping around the workshop.

Another point to consider is that for many DIY-ers, a block plane might be the only plane they owned. Particularly in the early post war and inter war periods, when money was even tighter than today, it prompted Stanley and Record to produce the cheapest possible block planes. These economy variants are amongst the worst tools I've ever handled, don't waste your money on them!

To summarise, for trimming jobs a top of the range Stanley or Record low angle block plane is fine, but get a second iron so you've both high/standard angle as well as low angle. For end grain planing firstly take care to minimise the scale of the challenge, then fasten the work very firmly, and then use a regular bench plane but be prepared to hone the edge frequently. If however more awkward end grain planing will be a regular challenge for you, then spend the money and get yourself a Lie Nielsen or Veritas tool.

The big boundary is wether you intend to use it one handed, or as a small two-handed plane.

This has a strong effect on the size of the tool you buy; some people love their #102 very dearly; very much a one handed tool.

bugbear":22cwb0tg said:
The big boundary is wether you intend to use it one handed, or as a small two-handed plane.
Click to expand...

For chomping through tough as nails end grain you really, really want to get both hands firmly on the plane, so a bench plane is often better choice than a titchy block plane. Unfortunately there are plenty of end grain occasions when you need one hand to steady the work piece and only have one hand left for planing. That's when you wish you were doing something else!
C

I was just finishing an off-cut as a guitar body blank for the forum's "For Sale" section, it needed the end grain cleaning up, but I didn't want to lose any of the length by sawing. It's 43mm thick Black Walnut.

This is what end grain shavings should look like, 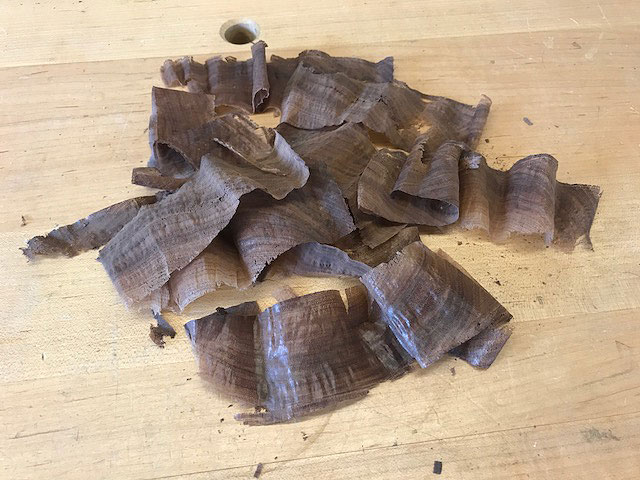 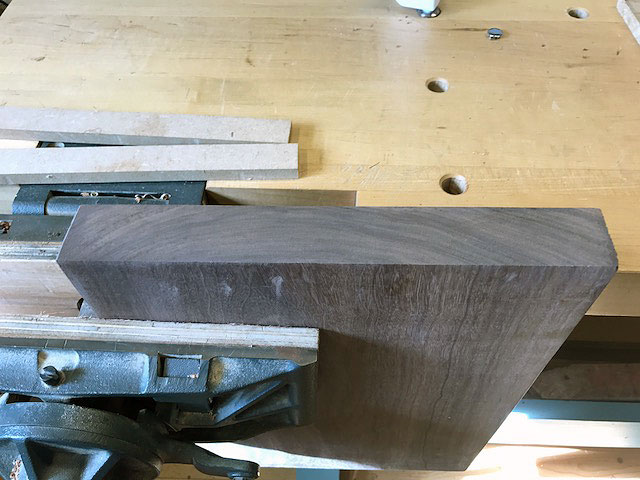 I'm not saying you couldn't do this with a block plane, but it'd be so tough on your fingers that you wouldn't want to do it twice! Far better a beefy two handed grip on proper handles and a freshly sharpened iron.

I'm very much an amateur but I bought a Veritas LA block plane years ago and it qualifies as one of my best purchases ever. I've supplemented it with higher angle blades but I can't think of a day in the workshop when I don't use it.
I did buy the handle and front knob to use with the high angle blade on difficult woods but to be honest I've only used them out of curiosity rather than need. Not the cheapest but for me brilliant value for money.

3 Dec 2020
Popey
P
R
which hand plane to add to the collection next?