Lorries with a hexagon logo livery

Does anyone know what firm has a hexagon logo as their livery? Several hexagons, like a beehive?

Last night I was being driven by a friend up the M1, when a lorry got as close behind us as he could, sounded his horn, turned on his main beam and generally intimidated her. We were leaving at J28, as did he (I'm assuming it was a He). He headed off down the A38 towards Derby.

I can only assume that he was upset that she was doing 60 instead of 70. It is a small, old, car, it was dark and we were about to leave at the exit. It was totally uncalled for and it really upset her.

I didn't have my eyes in, so I didn't see the name, but I did see the livery. If it rings a bell with anyone, I'd be really grateful. I'd certainly know it again if I saw it.

This is the sort of pattern I'm talking about

Any help would be very gratefully received. I had to calm her down so that she could continue to drive me home safely. It was not a fun experience, I assure you.

Some of the hexagons were incomplete, like stray lines.

Thank you, but I can't find a Co-Op image that remotely matches. There is a Co-Op distribution centre very nearby, but he headed off in the opposite direction.

That's a hexagon matrix, I agree, but it wasn't like that. Just straight lines, no fill. 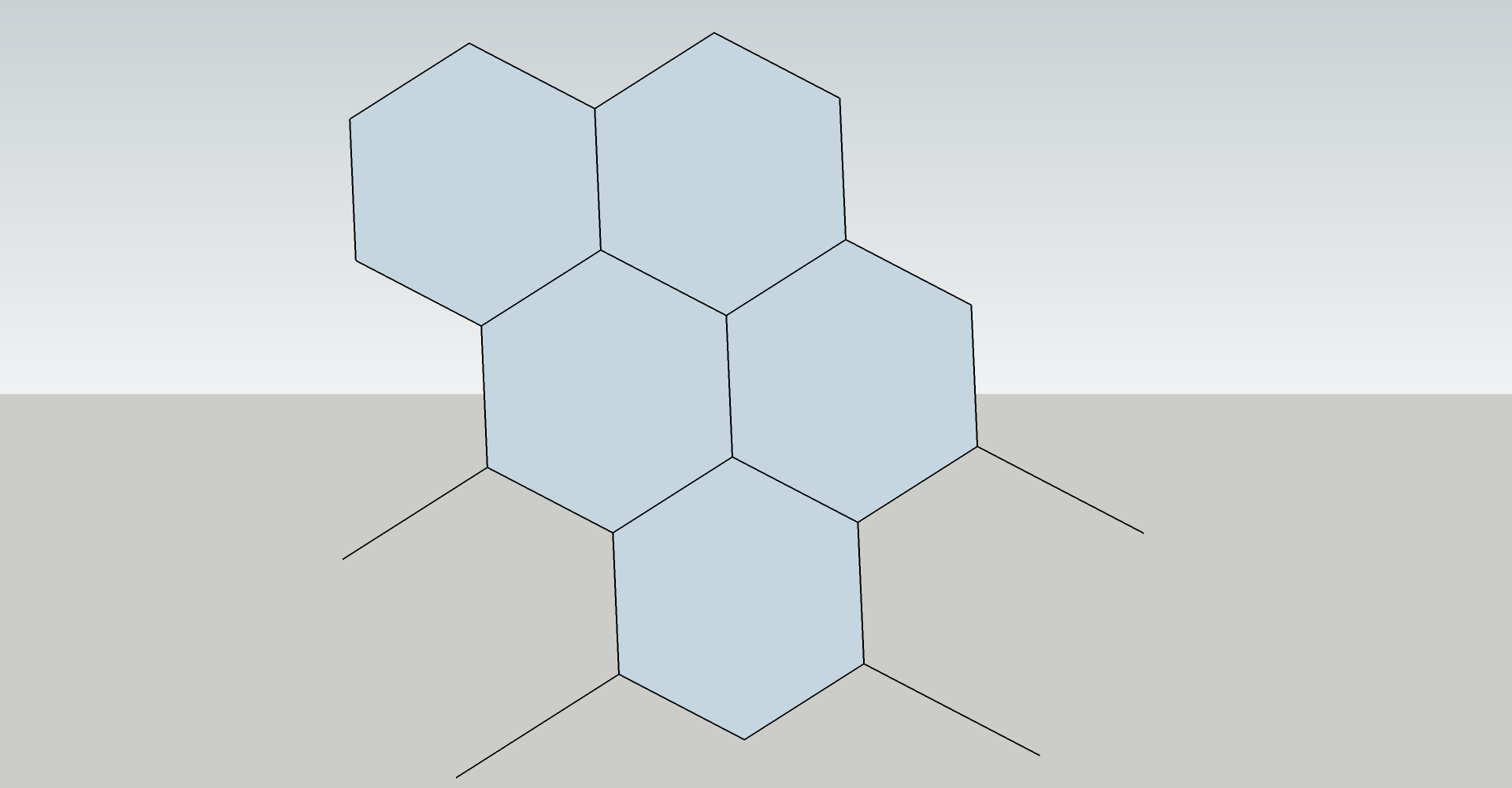 The two-tone background is Sketchup's contribution, not mine.

What kind of lorry was it? Curtain sider or Bulk Tanker? Quite a lot of bulk tankers have a hexagon pattern on the tank.

Unfortunately, even if you figure out what company the lorry came I seriously doubt they would want to bother to do anything about it.

No, it wasn't a tanker it was a trailer of some sort.
I was wearing my specs rather than my contact lenses, so there is some visual impairment, but I am not blind. Not yet. I know what I saw.
H

Also how did they get up behind you if you where doing 60 ??

I didn't see the plates.

Well I don't know that she was doing 60 exactly, but she doesn't, isn't able to, put her foot down, it's an old decrepit car, and she doesn't actually like going fast, so I'm guessing 60 (that could be important, from a legal point of view).

My point is that I assume that he thought that she was not going fast enough and was trying to get her to drive faster, in a totally inappropriate way.

Any idea of colour?

Thank you. No, it was more beige on white. And no infill colour.

Most motorway junctions have CCTV cameras now. If the lorry driver was driving dangerously you should report it to the police.
H

Well I don't know that she was doing 60 exactly, but she doesn't, isn't able to, put her foot down, it's an old decrepit car, and she doesn't actually like going fast, so I'm guessing 60 (that could be important, from a legal point of view).

My point is that I assume that he thought that she was not going fast enough and was trying to get her to drive faster, in a totally inappropriate way.
Click to expand...

Not sure that the highway code agrees with you. There are minimum speeds applicable to motorways - it used to be 30mph, but may have changed in the last 30 years. You are not required to keep up with the fastest moving vehicle - it's what all the lanes are for - it's the whole point of it, in fact.

Just because lorries are supposed to travel no more than 56 mph, it doesn't mean that they do not.
I assure you that she was not driving inappropriately.

The car is legally roadworthy, recently MOTd! It's just an old banger, not a supercar. 70 is the maximum, it is not the required minimum.

Even if it were, it does not excuse this sort of harassment. It is dangerous.
H

The highway code has nothing to with it sitting in a lorry at night and all of a sudden being on top of a car is dangerous no two ways about it
In the dark the problem is worsened as your sense of perception is skewed
And Sitting on a fairly empty motorway at night with nothing to look at can lead to two problems
Firstly drivers can become blind to things changing, there is a term for this as fighter pilots experience it
The second problem that occurs is target fixation where you see an object and concentrate on it so hard you steer into, it's why people can crash into the only tree on an empty stretch of road

You have an interesting point of view. I wish I could understand it.
This guy deliberately intimidated her when she was driving perfectly properly. I don't see how that can be justified.
D

Let it go.
Whats done is done.
You provided your support to your friend.
H

Steve Maskery":s74642y1 said:
You have an interesting point of view. I wish I could understand it.
This guy deliberately intimidated her when she was driving perfectly properly. I don't see how that can be justified.
Click to expand...

I said in my first post his reaction was not justified yes he over reacted however I am trying to educate you of the problems you are causing and how it's dangerous
I work in traffic management zones on a daily basis and get to see allsorts and people simply don't realise how much of a dangerous position they put themselves in
Personally seeing what I've seen I will not be anywhere near an HGV on a main road Infront behind or to the side if I can possibly avoid it let alone be running slower than them
You must log in or register to reply here.
Share:
Facebook Twitter Reddit Pinterest Tumblr WhatsApp Email Link