You think you've got a big table? 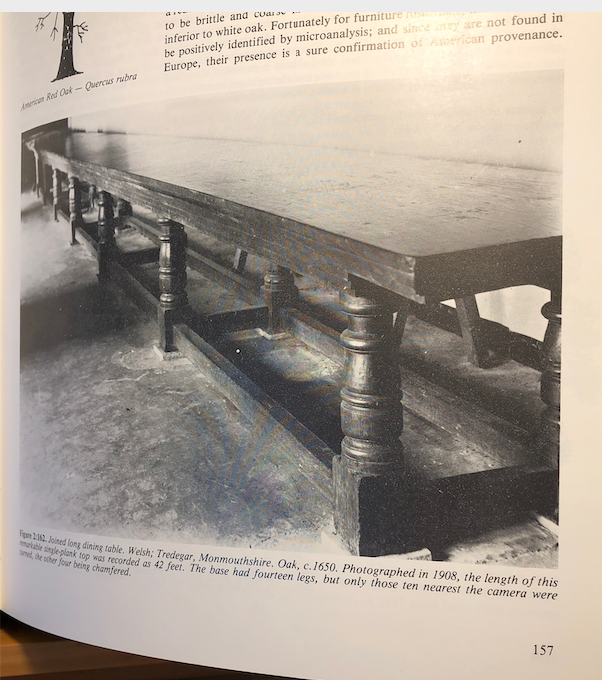 In another thread I asserted that there was a table originally over 70 feet long, made from a single plank. As the thread was about a shaker table build, I set the record straight here. It has bugged me that I couldn't remember the details.

I have hunted through my books. Most very large furniture was estate made back in the day, and so could not really be used anywhere else.

Robert Plot, in the Natural History of Staffordshire, 1686, claimed that an oak tree grew in Dudley New Park which was of prodigious height and magnitude, out of which was cut a table of one plank twenty-five yards three inches long and wanting but two inches of a yard in breadth for the whole length.

For some reason I thought this had been cut down, but I was confusing it with the Welsh jointed (referring to the leg structure) long hall table of Tredegar, Monmouthshire in 1650. The single plank top was recorded as 42ft long and photographed in 1908. The base had 14 legs, some turned some not. Thickness looks to be about 4 inches.

Chances of finding a plank that big today - nil?

Magnificent!
Any idea what the longest/largest surviving table is? It's the sort of thing tour guides love to tell you but I find it hard to remember.
J

A tiddler compared to the above but there's a biggish table in the Black Country Museum which I posted about here post1268564.html?hilit=black%20country%20museum#p1268564
Also biggish at Haddon https://commons.wikimedia.org/wiki/File ... C02569.jpg

Look at how low the stretchers are. Great looking table. Drying it nicely then flattening it by hand would have been a whole lot of fun.

Mediaeval tables were often (if not always) used up against a wall, so the turned legs were the ones at the front and the ends, and the more basic ones were at the back out of site. At least that's my understanding.

In Tredegar house near Newport they have this 42fter. Edit: the very one which started the thread.

They keep the surface covered but the size is impressive. Bad phone pics from last summer when I went to see it 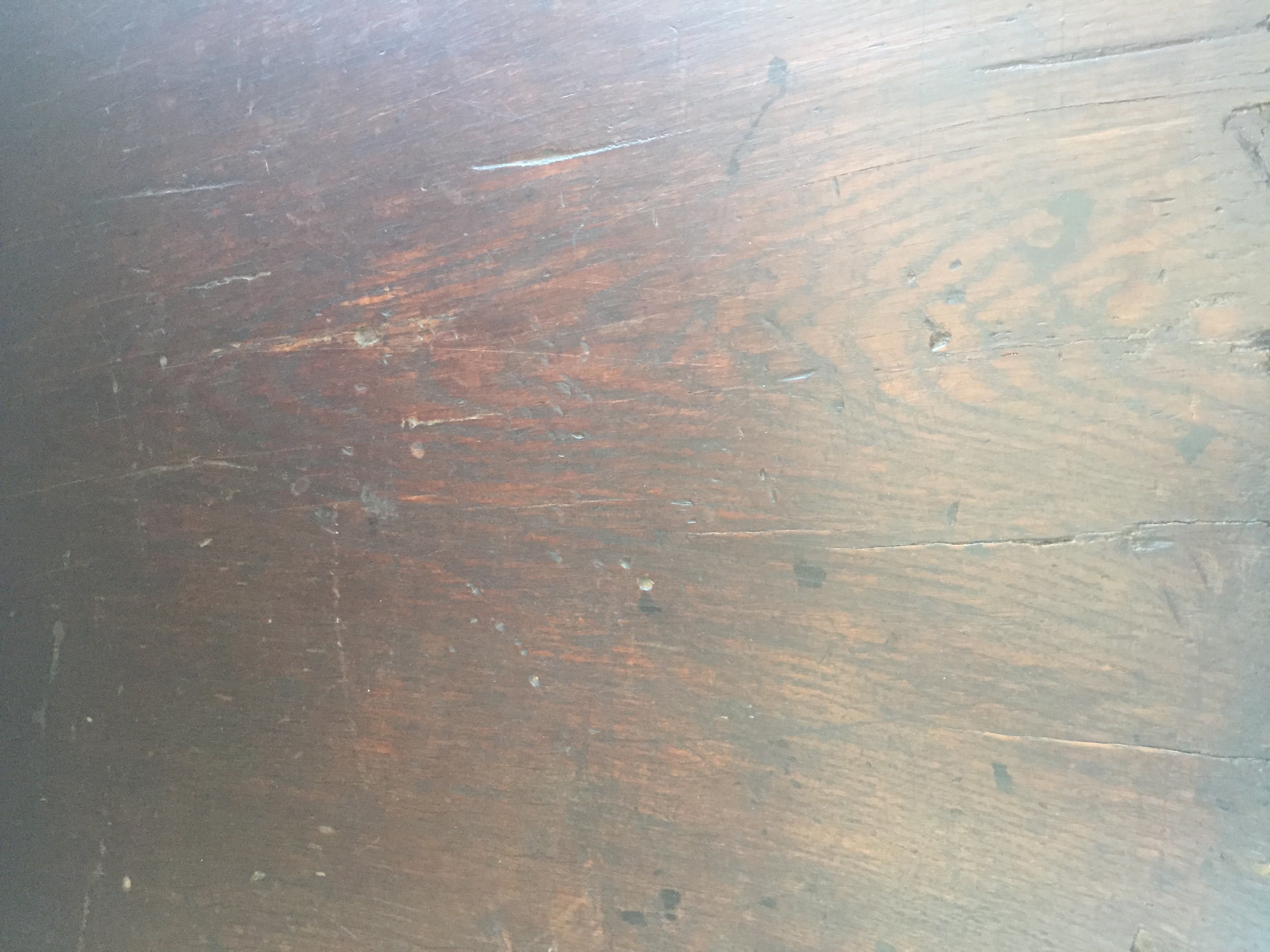 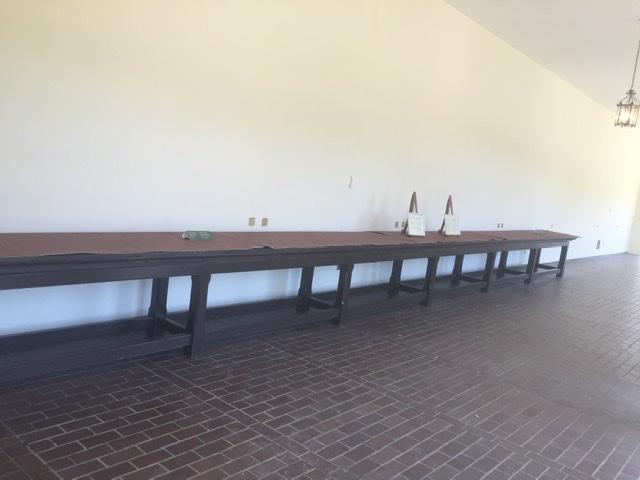 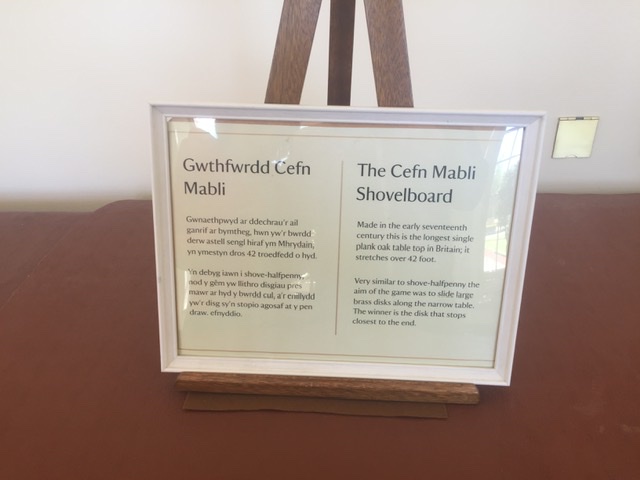 Thanks Tom - that sort of answers my question about the longest surviving table. But it's an oddly specific claim - "the longest single plank oak table top in Britain."
That implies that there is some competition out there - a longer single plank table made from a different timber, or a longer oak table made of more than one piece. (So, two narrower oak boards side by side might win, or an uncommon sort of construction with end to end joins in it.) The hunt is on!

I think if the Fenlands Bog Oak table ever gets completed it might compete for the title of the longest table in Britain, but it will be 4 or so planks in the width.

And they reckon the 13m long piece may have only been a quarter the size of the original tree :shock:

And it was cut by hand!

Trevanion":349ex9og said:
I think if the Fenlands Bog Oak table ever gets completed it might compete for the title of the longest table in Britain, but it will be 4 or so planks in the width.

And they reckon the 13m long piece may have only been a quarter the size of the original tree :shock:
Click to expand...

Thanks for that - it got mentioned in the discussion about Mike G's bog oak, but I didn't follow up at the time and then the thread got pulled, so good to be reminded. Very special timber, should be an amazing table. Great collaborative project.

Ha, you got me there on long planks.

I was talking about oak really. They were by no means the tallest trees in mixed deciduous forests of the Tudor and Elizabethan periods, and there are not many seriously big oak trees about any more, sadly.

I agree with Mike, that records typically indicate that these long tables often had a plain side with mouldings and turnings and fancier legs and a wall side. However, a lot of the estate tables - where furniture was made from timber felled on the estate of a country house and used in the estate workshop, did have two fancy sides as they would at times be sat all around. Likewise if they were intended for one of the many coin shoving gambling games. I am no expert btw - I have just read most books going on period furniture up to about 1820, so I just parrot what I read. I have a feeling that a lot of the genuine experts on furniture from say 1400 onwards are dying breed.

I find it amazing that they could cut these massive planks, 30" or more wide and in some cases up to 4" thick, and manage to avoid destructive splits.
J

Have a look at https://regionalfurnituresociety.org/ they are alive and well.
When I was a member one excursion was a trip around Haddon Hall led by the late V Chinnery himself.