Anyone made a scissor lift table?

Hello folks
Just pondering this for the future, as I've got a few lengths of suitable heavy gauge box iron which would nicely do the job of making a scissor lift table.
It would be a great outfeed and also double up for plenty of other duties, small ride on lawnmower
is likely the heaviest think would need.
Not looked into all designs, but three that stand out
Mainly looking into these designs
The Harbor freight one looks about the size I want, and drops down nice and low,
be low enough to lift something heavy and awkward onto. 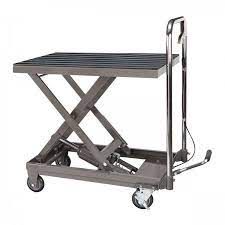 Not looked much into this Felder one below,
It doesn't seem like it drops as low as the Harbor Frieght, too big for what I want,
but that doesn't mean it can't be made smaller. 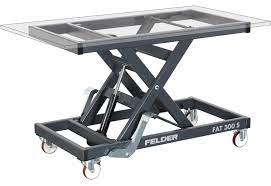 And then Marius's Hornberger's design which is worth a mention. 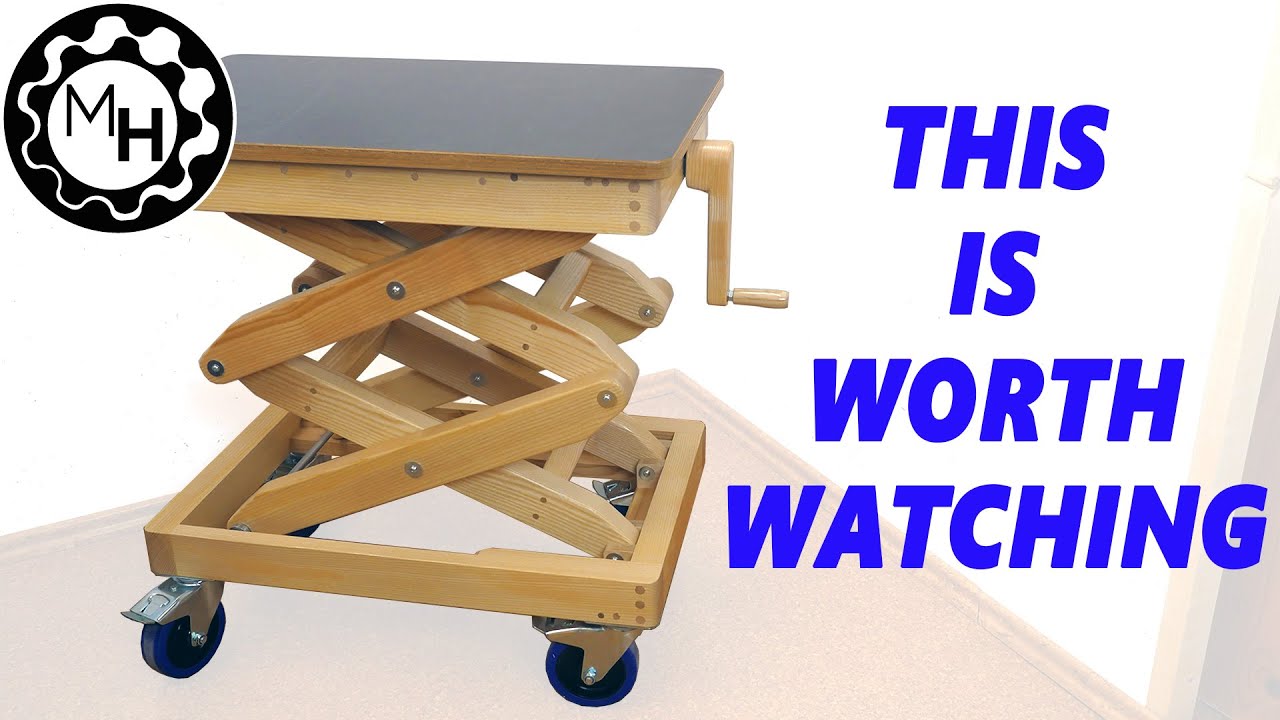 Perfect size for me, bit shorter than the rest, no need for it to lift so high though.
The problem is the screw looks too slow for my needs, and needs an expensive thread,
compared to a likely expensive hydraulic ram, which I have no clue about at all, apart from using a car jack a few times.
Would love to see if I could acquire one for cheap, should they be available from something else,
I don't need it for to be reliable under strain if that helps to get one cheaper, as the foot pump looks the best method.

What I have at hand is a car jack like below.
I was thinking I could make do with a two or even three stage lift for use the jack, at least for a while to see if I could get by with that.

So apart from my ram question, I have some more...
Before I even think about getting some scrap pine to mock up,
Do you think it's necessary to have a dual or stacked scissor lift like Marius's design,
or could it be accomplished with a single pair of (legs?)

I know I can just mock it up, but just asking should anyone have seen something else like what I'm looking for.
Love to see some more examples, these must exist.
Strange not to see more of these harbor freight ones about, as they look dandy, (bar the handle which could be seemingly much improved, should it not fold down.)

If I was going to build one, unless I wanted to move it about with heave loads on it I'd think about making the wheels retract (have the frame close to the floor to start with) load bearing wheels are very expensive, I'd save the money to put into the frame, definitely use a hydraulic ram and make sure to have a chocking mechanism that drops into place as the table lifts. I have never built one but inspected a lot in my old job. I have seen a lot of failures, never any nasty accidents but some very close calls. One issue with the Harbor freight type is the load they can lift and the position it should be centered about change as the table lifts - obvious I know but sometimes forgotten. I would not use wood for the frame, the place most of these fail is not the pin joints but the point where the frame houses what ever supports the pin.

Thanks Ozi
I was going to add that I won't be lifting anything too heavy, small ride on lawnmower or workbench about the max load I need.
Not lifting cars, and can chop and change casters should large ones be in the way.
No issue should something with a suitable ram be available for dubiously cheap prices,
I'm OK with that, as anything heavy doesn't need be lifted much more than an inch or two.

Only want the adjustable height for various machines.

I made one a couple of years ago to lift a 50 kg sander from under a bench to almost-bench height. If I did it again, I would certainly now use metal rather than wood (I have since learned to weld); there are several YouTube videos for metal-based lifts.

While the wooden one I built worked perfectly for lifting and lowering itself and holding loads in-situ (like Mattias’s one), mine could not raise the 50kg load without breaking different parts; eventually I replaced the ones that broke in turn and eventually most of the core mechanism was replaced with metal parts, but it would have been much easier starting with a metal frame.

I would probably still build-rather-than-buy as I enjoy the project, but the £300 Clarke ones from Machine Mart etc. seem to retain 50% of their value after several years, so I would also be tempted to just buy a solution if in a rush.
O

Thinking out loud - on a keyboard? - could you use a bottle jack and some sort of ratchet. I have a cheap 3 tonne jack that lifts about 6" (excuse the mix of measurement systems) give it some leverage and lift up to 1' at a time, one lift gets you mobile and three to bench height. I bought the jack while thinking of turning an old dishwasher and some steel stock into a cider press, you might want to take that into consideration before following any of my "expert" advice.

Thanks Alpha-Dave
Just thinking it would be a good use of this box iron, which I have an excess of,
gotta buy it in long lengths, thats 40 euros worth already,
so trying to do things on the cheap.
Aiming to be able to have it around a lawnmowers width, and scootable inbetween the bandsaw and tablesaw which is tucked away the motor side of the bandsaw.
The two machines and main bench on wheels already.
Nice to be able to move the other workbench, so it would need drop down that much at least. 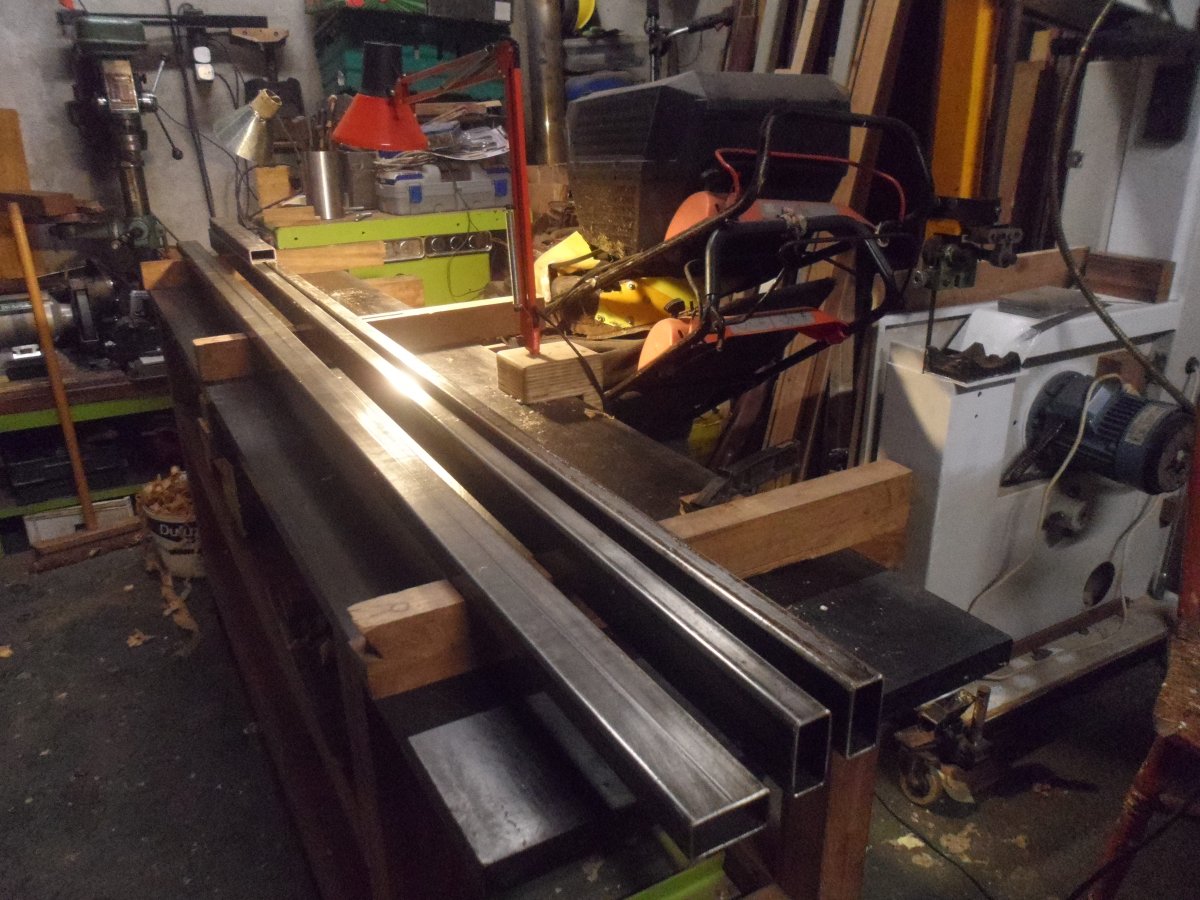 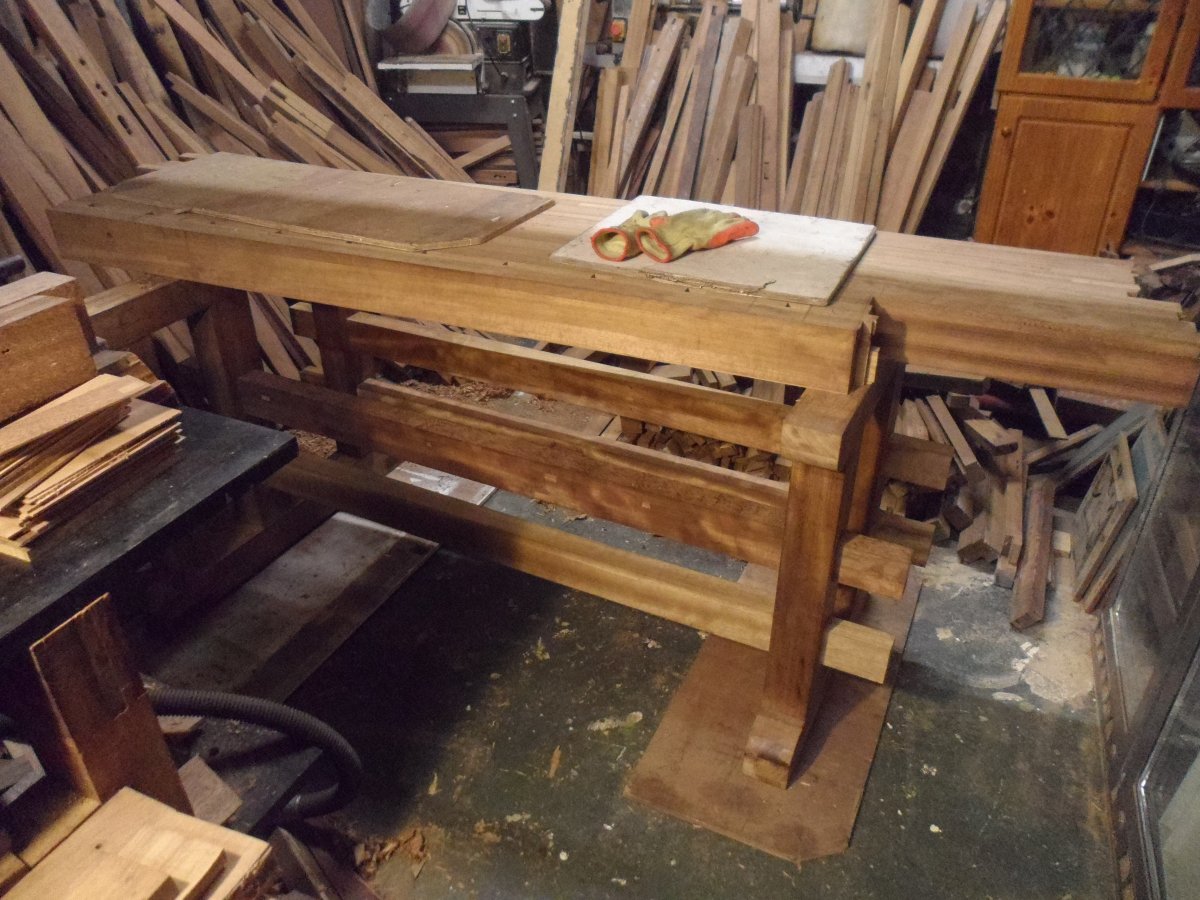 @Ozi
I'm not sure how much travel I'd get on those bottle jacks, it seems much less than, say the harbor freight carts, but I can't say I'm anyway fimiliar with what I'm talking about though, and never made any kind of scissor lift devices before.

Just was thinking it might be a common part for something agricultural which might be available locally for not so much.
Hopefully my post above might give a better glimpse into what I'm looking for in regards to the travel needed.

This seems like it could be what I'm after,
as I've been watching a few pump carts and it does seem a little bit of a faff too.

I haven't tried to find more info on it yet, the thread looks fairly affordable m10 or 12 by the looks of things, compared to some other home made versions I've seen.
I was under the impression that it would be extremely slow, not the case!

Would love to get a better look at this, hopefully I can track some posts on a forum somewhere about it.

I used an m12 thread in my first try, it works fine for the moving the frame under its own weight, but the friction became too much with a top on (I used a piece of kitchen work surface).

I then used a ~40mm acme vice thread that I picked up at an antique fair, that was better but then I struggled to put enough force into the handle without tipping the cart.

Then raising with any weight (e.g. 30kg) on was impossible.

You need a fine pitch, well machined rod and nut if moving higher forces, which gets expensive quickly. I wonder if a standard nut and rod with lapping paste may work, but I didn’t try.

I then picked up a hydraulic ram from a hospital bed, which worked well, but then the forces push out from the frame rather than pulling together as the screw-thread driven designs do, so much breaking of wood and bending of metal until it was reinforced enough.

Well pineapple it anyway, I led myself to believe that it was for lifting things,
but I see that is not the same thing as a lifting table
Nice to see some design input none the less, easier to picture things working and where a car jack could possibly be implemented.

Even possibly an office chair could be utilized, but maybe more suited to ironing boards.
Just worth a mention should others want something like that.


The hydraulic rams must be more common than just used for pallet jacks and hospital beds, which incidentally are priced similarly.
Heard of barbers chairs which are rare, and priced accordingly.

Love to hear some possible options.
Thanks

Well I hadn`t really but now I have.

Do you have a compressor? You could go down the route of inflatable bags within a framework, the Fire Brigade use them to lift lorries that have gone over. Just an idea. Ian

If you never fail you're not trying hard enough

I built a raising bed for my DeWalt site saw, built around a standard car (screw) scissor jack. It worked fine. For about three weeks. The force required to open the "scissors" from a flat condition is huge - and simply stripped the thread. I've replaced that with a small hydraulic trolley jack which works OK. A bottle jack would be better - but I didn't have one of those!
O

Cabinetman said:
Do you have a compressor? You could go down the route of inflatable bags within a framework, the Fire Brigade use them to lift lorries that have gone over. Just an idea. Ian
Click to expand...

Or pneumatic cylinders, you would need some kind of safety ratchet in case of failure.

I bought some threaded rod and nuts for something I am building and it was surprisingly cheap. Its coarse threaded and 20mm, its like the screws found in a bench vice. So it will be better than the screws in a jack.
I got mine from Accu, they have a massive range of stuff like that .

S
Anyone with issues leveling a Jessem lift