Workshop Build: Turning my frog into a prince

Hi all,
This is my first thread where, with your advice, I plan to build a new workshop to replace my prefab garage.

A bit of history:
In 2007 we bought our stone cottage complete with large garden, 2 acre paddock and two outbuildings; outbuilding 1 had two pony stables and a tool room, outbuilding 2 is a large 10m x 4m 1970s prefab garage. We moved here for the land so we could have a small holding; since then I have bred pedigree sheep on a make do and mend basis as far as the outbuildings are concerned. The house was a wreck and we've spent the past 12 or so years renovating it as budget allowed, but the outbuildings were way down the pecking order until I took early retirement and could spend my time renovating them. The stables were in a sorry state, the walls very sturdy, built from 130mm multicell blocks, but the roof and doors were shot to hell. I use the two stables as temporary sheep lambing pens, the other is a toolshed. The garage structure is in pretty good knick but totally unsuitable as a workshop. As for me I have a lot of experience of DIY and building renovation but I'm no expert; I'm still pretty active but no spring chicken!

The Plan:
Transform my not so beautifully painted 1970's built prefab garage into a splendid workshop. I want to keep the prefab blocks as I rather like the stone effect and they should paint up nicely. The stables would be clad in feather edge after the workshop is finished and the whole lot painted. 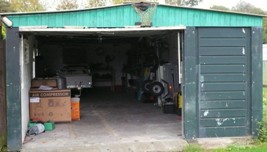 into this (sort of) 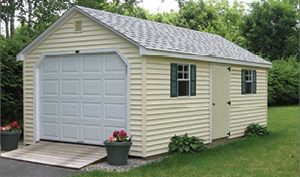 The Problem:
The outbuildings are flooded every so often; they are at the bottom of our garden and lower than the house, the paddock borders a stream that sometimes breaks its banks and floods the paddock and the outbuildings in 2-3" of water. Also the roofing is corrugated asbestos which was in terrible condition over the stables but in good order over the garage. However the garage roof suffers badly from condensation in winter and water dripping down has ruined quite a lot of my tools and other stuff over the years. It is freezing cold in winter and baking hot in summer. The two buildings are on the same 23m concrete slab but are offset from one another by some 300mm. The garage floor is solid but slopes quite badly towards the double garage doors across about half its length (this looks like the result of a poorly built later extension).

The Solution:
Raise the stable walls by one row of 215mm concrete blocks, build a new warmer cedar shingle roof and lay insulated concrete floors to the height of the bottom concrete block.
Move all the workshop stuff into the new, lockable stables and tool shed.
Take down the prefab garage and build a walk through with a dormer roof by reducing the size of the workshop to 8m. There will be an undercover single door fitted here. This walkthrough is to allow access to the paddock for me and the sheep!
Lay a course of 130mm concrete blocks with the front row in line with the stable wall. Lay a new base, build a timber frame over the blocks and attach the concrete slabs to the frame using the existing concrete posts but with longer bolts.
Build a new cedar shingle roof and integrate it into the stables roof with a dormer in between.

Current Progress:
The stables are finished enough to store my workshop stuff. Just for interest and to provide a bit more context on how it will work I've attached the following pics: 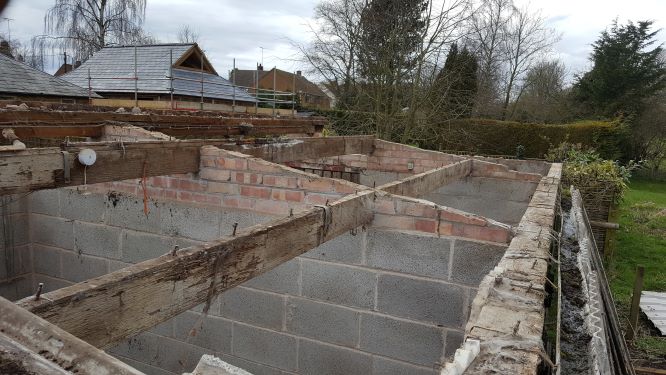 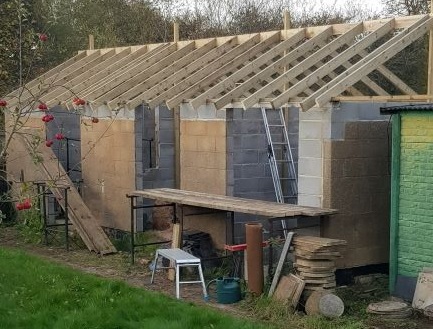 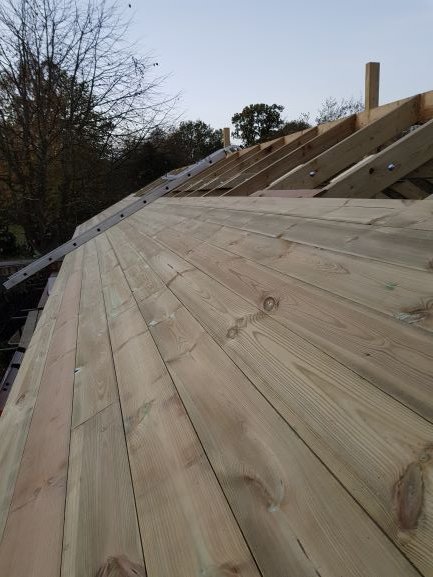 100mm floor insulation and 120mm concrete laid in each: 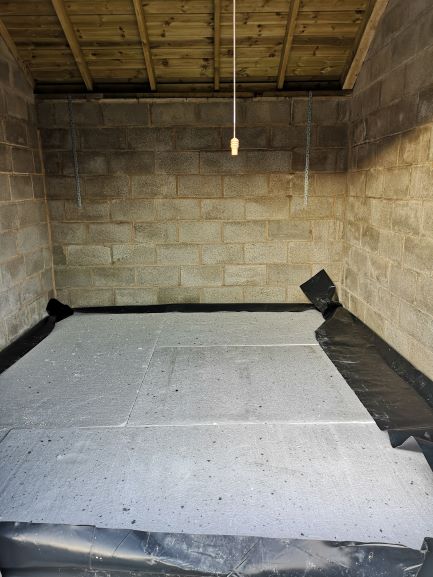 Inside the tool shed showing the sarking and collar ties 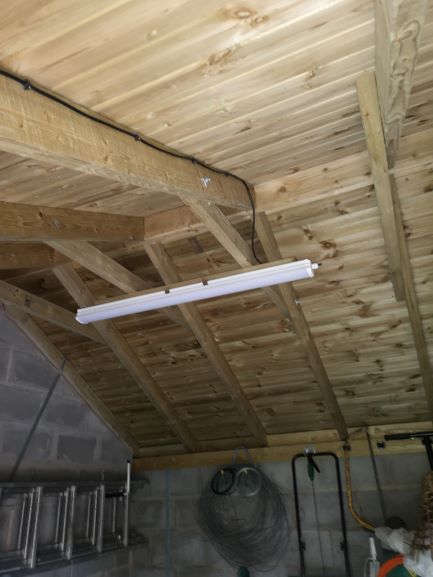 As it looks today, roof all nicely silvered. Also note the raised height of the thresholds. Phase 2 is on the right 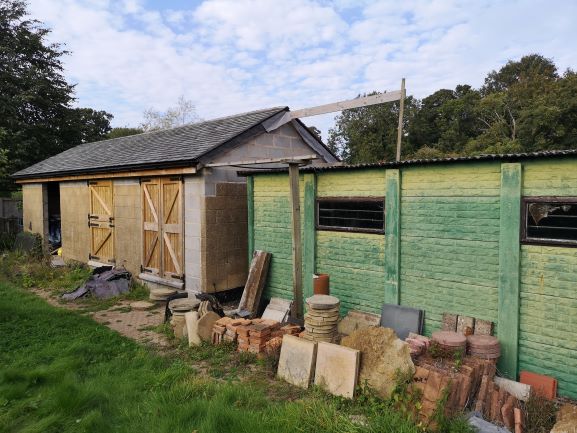 Phase 2 - Workshop
Internal garage walls were lined with thermalite blocks that weren't tied to the concrete slabs and wobbled plus they couldn't hold a toilet roll holder up. I sold them on eBay. 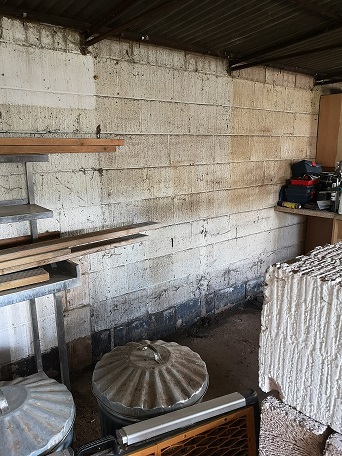 Thermalites removed showing typical bolt and clamp fixings. There is a full height rebate in each concrete slab that produces a floor to ceiling 'slot' that a 47mm piece of timber fits neatly into so I'm hoping that once bolted this may produce a stronger bond between timber frame and concrete sheathing, however I do need to consider if I can reduce thermal bridging. 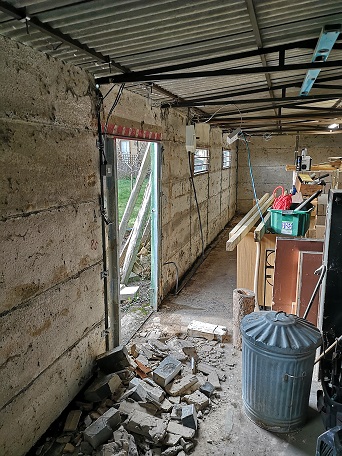 Here's a picture of the outer rear wall showing 300mm slab sticking out and this will increase by another 300mm once I deskew the two buildings, I may need to hire a wheeled cutter to remove the excess slab before laying the blocks and/or new slab. 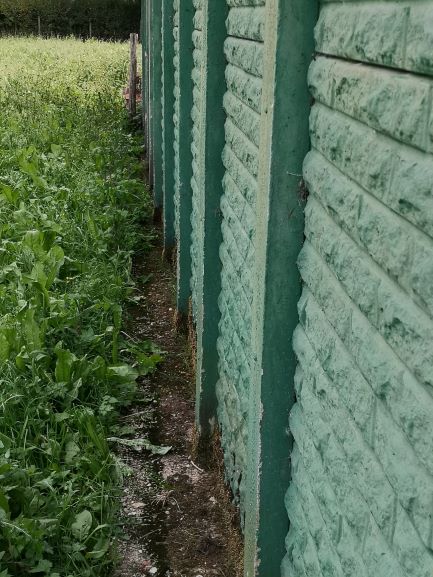 The front (garden) side will see a row of blocks or new slab right up to the edge and eventually mot and paviors will be laid up to the top of the row of blocks, so this side isn't a problem for water ingress. I plan to black shield the block or slab faces but there will only be MOT against them. 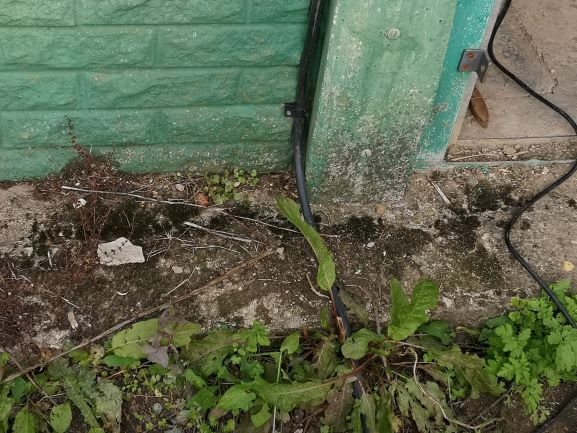 Before I can start the rebuild I need to solve two fundamental problems:

1. After reading other posts I'm concerned that once the concrete base is laid rain hitting the surrounding remnants of the old slab could permeate and cause damage to the blocks. I could build a wider workshop to go from edge to edge but this would increase my costs quite a bit. I also may not have enough concrete slabs for the extended bit (although I could infill with timber cladding). Alternatively I could trim the slab to size using a floor saw before I start the blocks which would be my prefered option.

2. If I build a row of 130mm x 215mm blocks as I'd planned, since reading other posts I'm now concerned that the force of laying the concrete may disturb the blocks. However, I could use formers made from the 125mm x 47mm rafter timbers to strengthen the block run. Would this work?

The rest of the floor construction will follow how I and others have done it before so I won't repeat all of that. Thanks in advance.
Last edited: 2 Oct 2020
C