Silk purse from a sow's ear? Any advice?

Chris70 said:
… and a sixpence was also known as a tanner. Or was that only in Geordieland?
Click to expand...

According to the Royal Mint (Coin Nicknames | The Royal Mint) the name "tanner" comes from a Romany word...
W

Orraloon said:
A yard is a meter thats been short changed by 3 and a bit inches.
I got used to both systems as when Britain changed over the change was so gradual they still have not finished it after 50 years. When I came to Australia everything was metric as they did the change in one go. Picked a date, said thats changed and job done. Quite happy and can work with both systems but do most of my woodwork in feet and inches as I can visualize that better.
I always look for a tape or rule that has both measurements.
Regards
John
Click to expand...

If the change-over took that long, imagine the chaos if changing from RHD to LHD.

I was 3 when we went decimal - it's all a bit before my time
Click to expand...

In Ireland 2 pennies was 'twopence'.

Raffo, Pence is just the term used in the UK decimal currency system for a new penny which was equivalent to 2.4 old pennies, it was used as an alternative to cent" The we don't want any of that Johny foreigner malarkey here dontcha know" attitude was still prevalent in the "Establishment" in those days. Also by the way, we used to call 2/6 (two shillings and sixpence also known as half a crown) half a dollar just to add a little colour to the mix

Nearly all the names used for british currency have foreign origin even the pound. The £ symbol is taken from the Roman army and actually mean Libre pond a part of a legionaries wages paid in pound weights of salt. This was done as it was then easier for the trooper to then barter trade for items he needed or wanted with the locals, who invariably lived far from sources of salt but needed it to preserve meat etc.
C

stuart little said:
If the change-over took that long, imagine the chaos if changing from RHD to LHD.
Click to expand...

Sweden did it a while back
B

6 of chips and a piece of fish please.

6 of chips was sixpence or a tanner Piece of fish was a shilling or a bob as per Peri at #15. So fish and chips equates to 7.5p in todays money.

And yes I am an old wrinkley

I’m wondering if you maybe going over the top regarding (sharpening) the plane…is it going to used for precision work or general use?…is all that hardwork going to be worthwhile and appreciate?

John Hall said:
I’m wondering if you maybe going over the top regarding (sharpening) the plane…is it going to used for precision work or general use?…is all that hardwork going to be worthwhile and appreciate?
Click to expand...

I didn't explain myself properly at the beginning. This is a "thank you" for some enormous help, so I will invest whatever time it takes to produce the best work I can. I offered to recondition a plane, and this was the item provided. 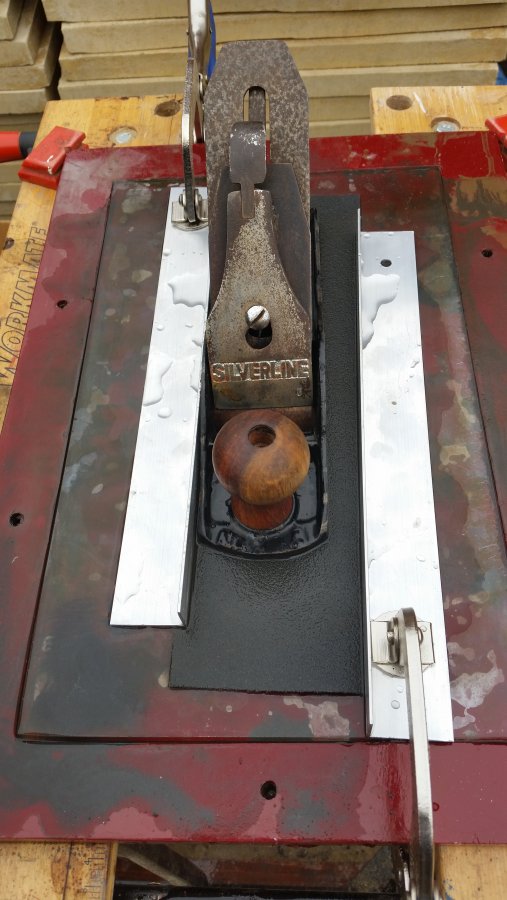 The above shows the upper metalwork after grot and loose rust has been removed. The knob has been sanded and oiled and awaits waxing. The handle has a crack, so after sanding to remove the old flakey varnish, I have glued the crack. Oiling/waxing to be done. 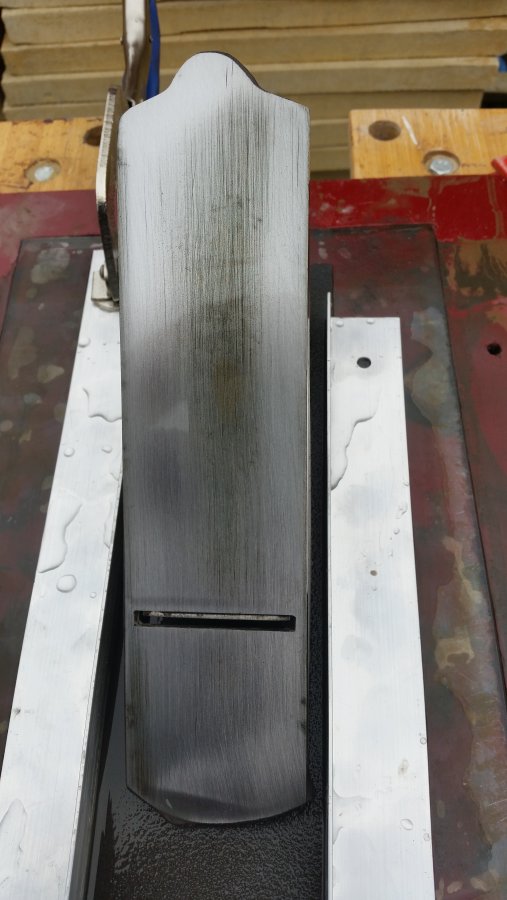 I was using the corrosion as a guide to flatness instead of marker pen. As can be seen above it is vastly improved, but has moved on since this was taken. Sole and cheeks have been waxed to prevent new rust and upperworks have been lightly sanded and painted.

A couple of oddities:

The cap iron is from Record and has been painted black at some stage.

The iron is only 1 15/16 in wide instead of 2in, ( as well as its camber ). I am sourcing a replacement iron to avoid a regrind. Anyone know what would use the smaller size?

Thanks for advice and interest.
B

Record used 2" blades in the later T5 planes, aimed at the schools market.
I fear a Record replacement will be hard to find.
Some No.4 smoothers also used 2" blades.

Chris70 said:
… and a sixpence was also known as a tanner. Or was that only in Geordieland?
Click to expand...

In Lancashire too. As my dad used to sing:

Johnwa said:
The we don't want any of that Johny foreigner malarkey here dontcha know" attitude was still prevalent in the "Establishment" in those days.
Click to expand...

Peri said:
The British resisted decimalized currency for a long time because they thought it was too complicated.
Click to expand...

I've only just come across this thread so I'm a bit late responding but that statement is so wrong!!

The 'Florin' introduced in 1849 was the UK's first attempt to change to 'Decimal' currency. At 2 shillings or 24 pence (d) it was 1/10 of a pound (20s or 240d). The fact that the original design came in for some derision - since it omitted the words 'Dei Gratia' (by the Gace of God) or even the abreviation 'D.G.' - caused it to became known as the 'Godless Florin' and may have had an impact on the decimalization not proceeding further.

The incsription on the reverce of the 1849 coin had " ONE FLORIN ONE TENTH OF A POUND " intended to promote the decimal experiment.

or even "three make one and six" which is what we sang in the midlands.

the Swede's made left hand drive cars for the home market years before they changed...
meaning u could only by LHD cars for about 10 years or so....
The day of change (remembering all the road signs had been changed prev).....
there was a blanket speed limit of say 30mph.....then over a few days it increased...
typically as in that part of the world it was all well organised ....

If they tried it here what would the snowflakes and woke brigade make of it...?
guess they'd all have a dicky fit and jump of a cliff...
perhaps it would be a good thing to try it just for that...hahaha....

also when in Calif they tried to change the fuel to liters.....
seem to remeber almost a riot and it got changed back again to UR short gallon....
what daya use now.....?

I can just remember going with my dad to buy a new suit...the price was in Guinea's..
dont they still use Guine's in horse racing ....?

u come here for wood related subjects and sort the world out......hahaha...

Renovation finished. Plane being fitted to box under construction. 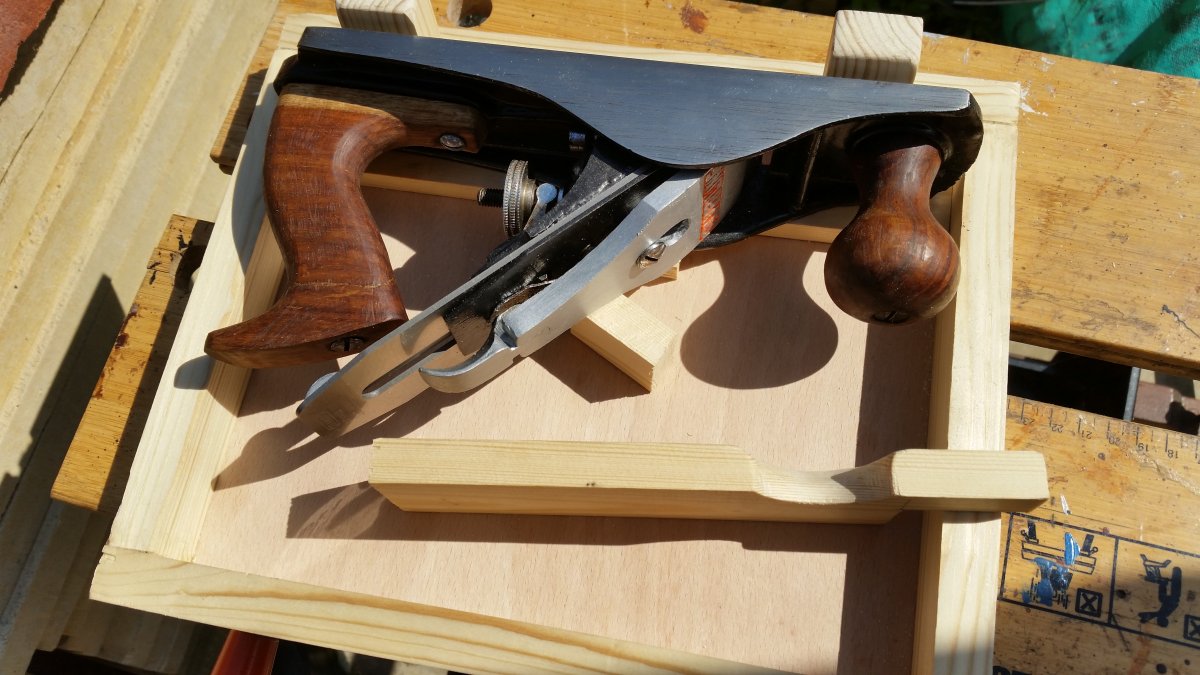 There is a crack in the handle. I fixed it by rubbing in a small amount of wood glue and letting it dry, repeating a few times. 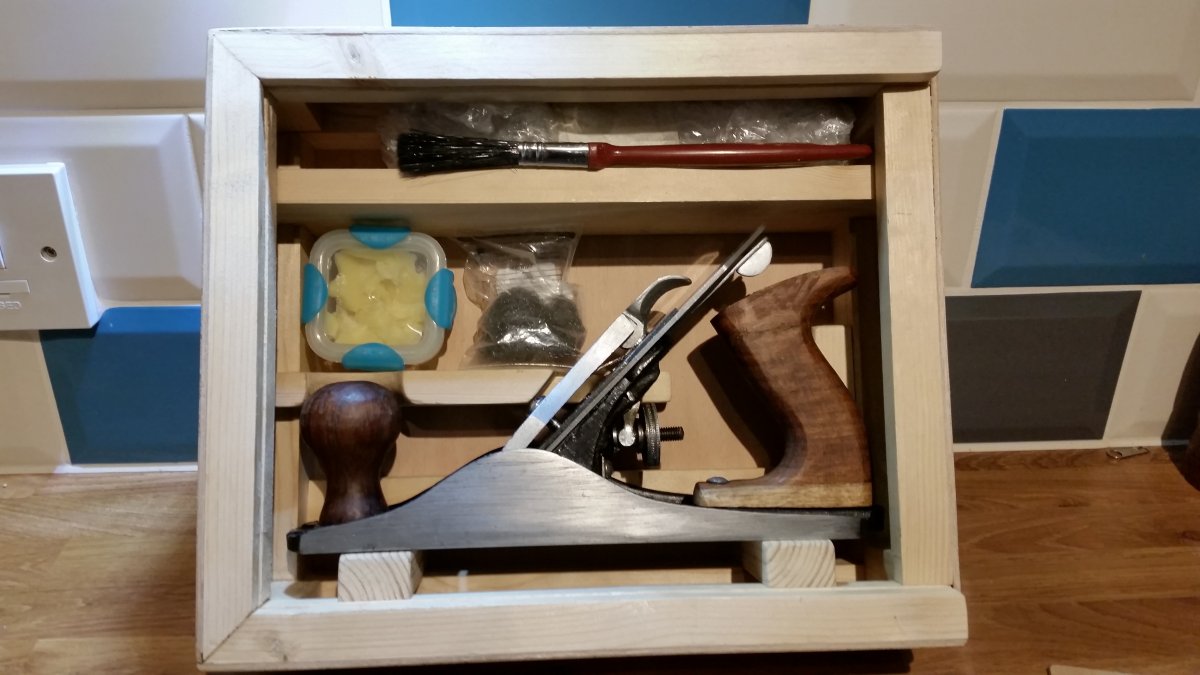 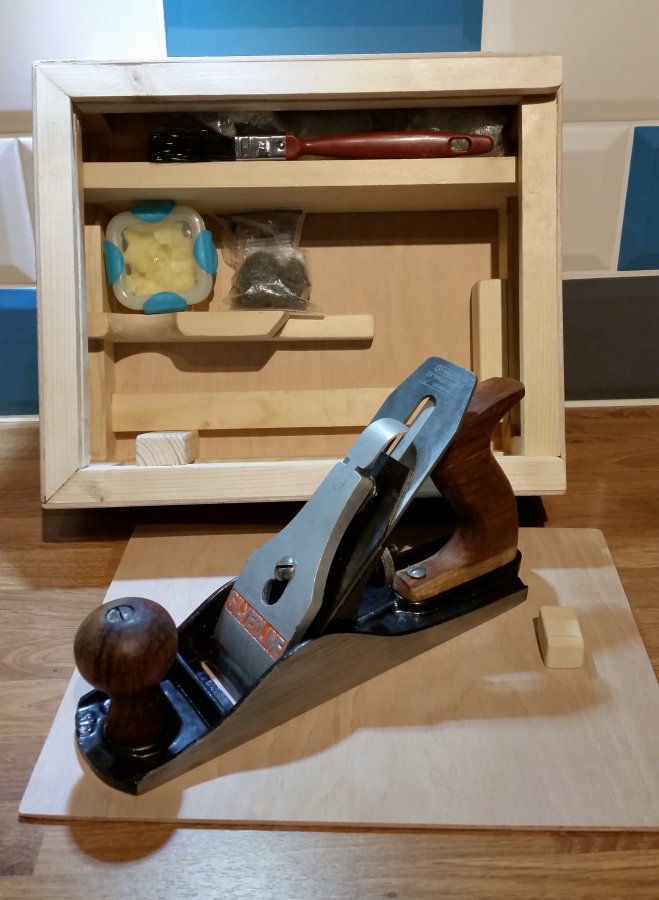 Box construction completed. Awaits choice of wood finish. I am thinking of a mid/dark brown stain followed by a couple of coats of matt varnish. Any suggestions/advice?

The yellow gunk in the plastic pot is home-made wax for the wooden parts and sole. The brush and steel wool are for keeping it clean. Under the brush is the original iron, completely cleaned, heavily waxed and wrapped in bubble wrap for storage. I sourced a new iron and sharpened it as the original had been cambered to make a scrub.

A Gigantic Shooting Board!