Location
In me garden shed 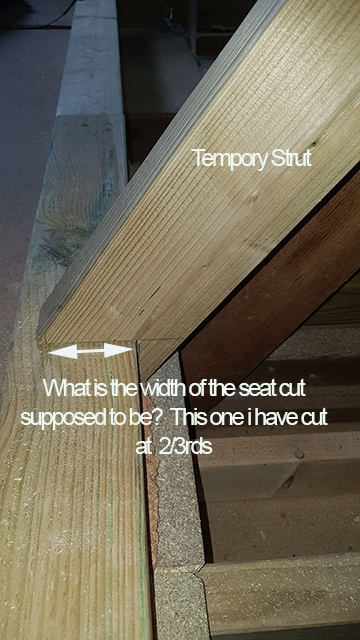 I putting some temporary struts in to support a purlin while a gable comes down. I have been trying to find how to best cut this joint for maximum strength
Do i cut the seat 2/3rds or half of the width?

depends on the angle. which I know isn't helpful.

from an engineering perspective at 45 degrees the force's are about equal in the vertical and horizontal plane so you'd want to cut it half and half. as the angle increases towards vertical (lets call it 90 degrees) the forces shift to the vertical and vice verse as you move towards the horizontal (0 degrees). there is obviously a point at which any you don't want to reduce under with any angle (say between 1 and 89 degrees) which from memory is around the 2/3rds.
looking at what you've got I'd say your 2/3rds is acceptable.
isn't there a calculator for this on blocklayer?

The normal rule that I follow is that the crotch of the birdsmouth should be one third of the way along a line running perpendicular to the slope. Your picture looks reasonable - near enough is probably good enough as long as You've got enough of these.
You must log in or register to reply here.
Share:
Facebook Twitter Reddit Pinterest Tumblr WhatsApp Email Link