Nearly twenty years ago I laid a solid walnut floor on suspended wood joists. It still looks good although it could do with refinishing with a couple of coats of Osmo Polyx.

Having now added an extension behind I have a gap between the wood floor and the tiled floor in the extension. This is also a transition between suspended wood floor and a concrete slab.

My plan was to lay some walnut boards (I still have a few left over from the original job) at right angles to the floorboards to form a threshold between the two floors.

Now, the concrete slab was laid at a height to take 10mm thick ceramic tiles so is too high to put a 20mm floorboard on top, so I planned on thinning the boards and gluing them directly to the concrete slab using this adhesive.

A little drawing illustrates the plan. Note that in thinning the boards there is no longer a defined tongue and groove. 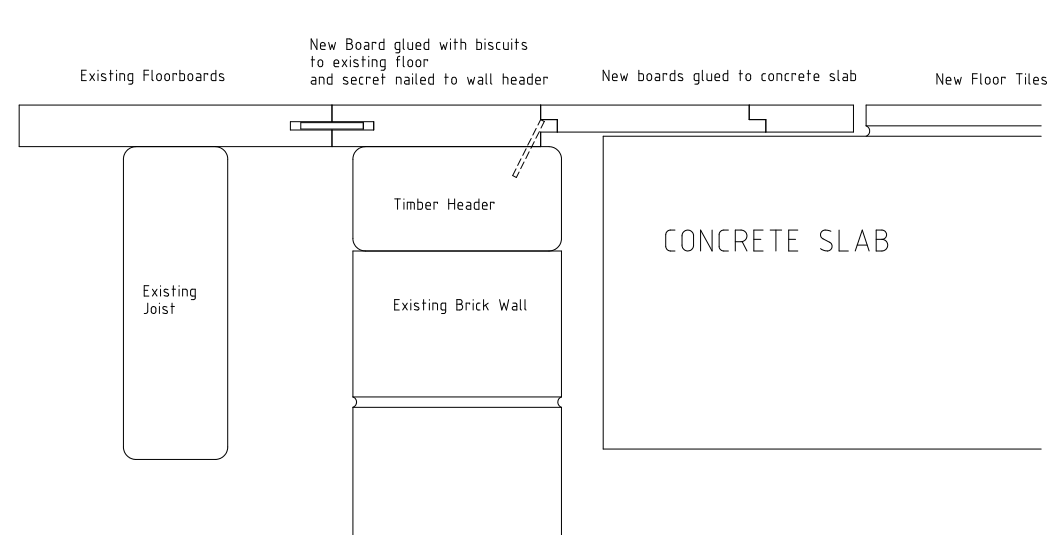 However, it turns out that the glue is a rubbery affair that (perhaps not unexpectedly) allows some movement and despite clamping the boards flat and because there is no groove to prevent it on side of each board has risen a little with the opposite side sinking.

Because the adhesive is rubbery it is possible to push the raised boards down although naturally they spring back up again. I could probably just sand the whole lot level, but I am concerned that any further movement would end up with uneven joints again.

In retrospect I would probably have glued the whole lot up first before gluing it down, but hindsight is a wonderful thing.

So, to a question. Is there anything that I can do to rescue the situation, or do I have to find a way to rip it all up and start again?
C

I’m curious as to why one side of each board has risen a little and the opposite side sinking, that’s not a normal reaction to how it’s shown on your drawing, not criticising your drawing at all just can’t quite see why it should’ve happened. How wide a transition is it please not that it makes much difference except is it the same right across or is it just where traffic has been? Ian
A

Perhaps what I missed in the explanation is that this was only laid last weekend. There is no traffic yet.

The boards were laid on the glue and and three pieces of 4x2 were laid across the tops of the boards and clamped with poles to the ceiling. The hope was that this would keep them level but it didn't work and I have ended up with the boards raised on side and sunken the other.

The instructions for the glue say to use a notched trowel but the glue was runny enough that it soon spread out flat anyway.

You say that you can press the floor planks down and they bounce back up, that’s not good at all so I think your best recourse is to dig it all up, clean the gunk off the back and as you say glue it all together, I wouldn’t use that glue again the bad reviews say it all, and the people that have been disappointed recommend something called Mapie ultrabond. Personally I would’ve used a building adhesive like pink stuff after glueing the planks together to form a solid piece. Ian
M

I recently had a similar problem on a threshold between a solid concrete topped with bitumen floor and a suspended wooden one. I was having Kardean laid so it had to be level. I glued and screwed the plywood subfloor. I was unable to screw into the bitumen and concrete so I used Gorilla glue, the brown multi use expanding stuff. I did what
you did and held down the board with props from the underside of the doorframe. This caused the glue to expand sideways as I laid the glue down in strips. I did have some come out of gaps but it cleaned off ok. It was not a large area and the karndean fitter was happy with it.
D

I used a Sika product for sticking down my floor which worked well, it is available in the sausage packs if you don't need much.

Another option is to use one of the hybrid polymer type adhesives like Soudal Fix All, it really is good stuff.
A

Thanks all. So, it looks like I really need to lift the boards and relay them with some 'proper' adhesive. Caught out by Screwfix' dubious habit of ordering reviews by rating.

So, next question. What is the best way to lift the boards that are already glued down? They extend under the plaster so there is no end to get a tool under to lever them up. I daren't try levering in the gap between the wood floor and the tiles lest I crack a tiles. They have only just been laid.

The area is about 3m long by 150mm wide if that makes any difference.
J

Do you have a multitool (fein-like thing)?
J

Ps a way to stop this happening again would be some plastic packers of the right height under both sides of the boards, a few will do it (like one each end and one in the middle) - the gaps in the glue coverage will be neither here nor there.
A

Jake said:
Do you have a multitool (fein-like thing)?
Click to expand...

Yes, but not quite sure how I can get it under the boards.
J

andrewm said:
Yes, but not quite sure how I can get it under the boards.
Click to expand...

If I have understood properly, the ends of the boards are under plaster. If so, you are going to have to cut them to relay them. I'd cut them 1/3rd to 2/3rd so they can laid back in a way that looks deliberate (the eye tolerates a lot if it looks regular). A multitool and a guide (block of wood on some hot glue/double sided tape, etc) will give you your best hope of getting them up to lay back. I'd attack the first plank by doing a c1cm or so double cut so you can wedge out the c1cm waste bit so as to get pry bars under the ends of the two bits. The others will be much easier as you can attack the prying from the sides.
Last edited: 9 May 2021
A

Thanks Jake. I had this mental block that there was some clever way that I hadn't thought of of getting a Multimaster under the boards without cutting them. But, a simple slot seems to be the way forward, especially if I can make the cut under a part of what will be the door frame so that it gets hidden.
You must log in or register to reply here.
Share:
Facebook Twitter Reddit Pinterest Tumblr WhatsApp Email Link