A quick electrical question for you knowledgeable people out there.

The dimmer is a triple one and the other two light fittings are still traditional bulbs. The dimmer is (I think) an MK grid system, can I just swap out the switch that does the now LED bulbs for one that is suitable? If so what do I need? 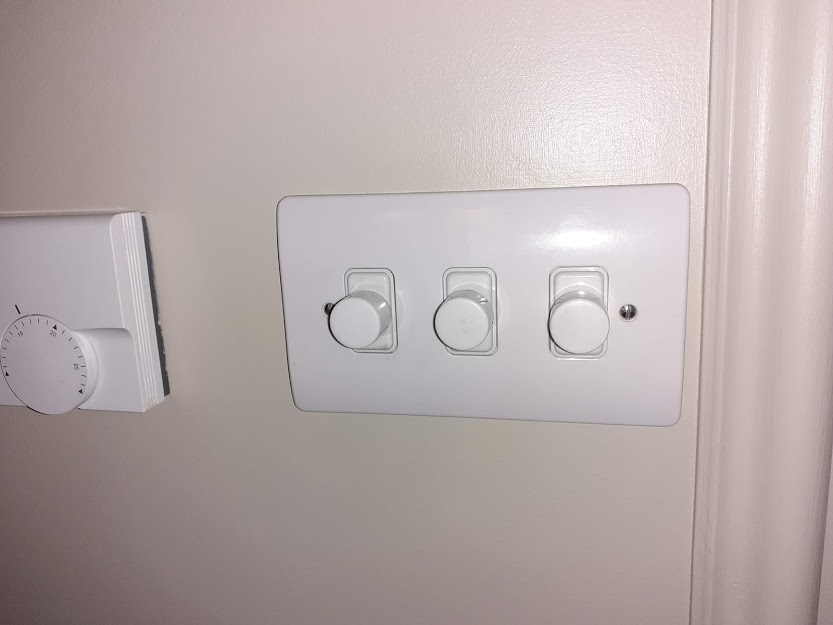 Over time the other fittings will be changed to LED bulbs so am I best just swapping them now and getting a different dimmer as I have never liked the look of this one (seem to remember it was quite expensive though)?

I guess the other cheaper option is to just replace the whole dimmer switch with a normal triple switch as the dimmer feature is hardly ever used?

You need a dimmer that is compatible with LED bulbs.

<p>Hager are a market leader when it comes to solutions and services for electrical installations. They manufacture items that are suitable for residential, commercial and industrial use, highlighting the company’s versatility and depth. Their products can be found in over 120 countries around...

I use these. Hager is not the cheapest but is high quality. You can get the with 1, 2, 3 and 4 dimmers in the plate. Soft start and work perfectly with LED lighting. It is not a rotary knob, but is touch sensitive. Totally silent.
P

Had a similar issue and used a single version of this.

3 Gang 100w V-COM LED Dimmer - White
Issue with LED lights is the high start up currents, much higher than incandescent/halogen, but running is negligible and why your existing dimmer switch causes the flicker as it struggles to detect the load, the one I’ve linked to and the Hager (look great) AJB posted, are ‘intelligent’ and what you need.

You could also try fitting a single ‘traditional’ back and the flickering would probably stop, but not the idea I know

Petehpkns said:
You could also try fitting a single ‘traditional’ back and the flickering would probably stop, but not the idea I know

You need what's called a trailing edge dimmer, if you are buying from B&Q etc. it should be in the description on the packaging or go to an electrical wholesaler and just ask them for one. They come in all shades and sizes. Quick tip, don't buy one that is too big for the job i.e. if you have 60W of LEDs but a 100w dimmer not a 200w dimmer, they work better at near full capacity.

Rorschach said:
You need a dimmer that is compatible with LED bulbs.
Click to expand...

Not only that, but you need a dimmer that’s compatible with the LED dimmable bulbs that you have.

Not every dimmable LED uses the same driver, in fact there are many different drivers for LEDs
B