A buddy of mine went through having a tattoo removed from his shoulder, it's something like 8 sessions and not only does it hurt like hell, it looks like a mess when done.
C

RogerS said:
Not really. Given the fast editing these days, I suspect that most of the camera angles will be on what he's actually doing with his hands. SIATC. IMO.
Click to expand...

Andy Kev. said:
FWIW I've read a fair bit about Naziism in an attempt to understand how such a political movement could emerge, thrive and nearly come out on top and surprisingly it is very difficult to come up with a brief summary of what defines how monstrous it was. To brand it a "hate group" won't do, if you're talking about the original Nazis. As you get nearer to an understanding of the historical truth, it becomes clear that it was far more complex and far more disturbing than that. But that said, it's clear that your comment refers to a grouping in modern Britain and when dealing with the ill-educated, rather moronic people involved, it's an unsuitable tag which nonetheless serves a purpose.

I tend to think that wearing a couple of pro-Nazi tattoos (cryptic or clear) is more an indicator of inarticulate cluelessness than anything else. I doubt very much if the average "Nazi" in the UK would be able to tell you anything about what Hitler stood for or the horrors which his regime involved. I suspect that for them Hitler is little more than a convenient symbol or brand which carries the added attraction (for them) that any hint of support for him and his movement is regarded as being very naughty indeed and we all know that a lot of young, agressive men love being thought of as bad boys.

Ultimately in poltical terms, they are a bit of a joke and I cannot imagine the circumstances in which the general public will ever come to take them seriously. Although clearly it is no joke if you are a black bloke who is unfortunate enough to get a kicking from them. What they probably need is resocialising as opposed to ostracising.

The bloke in question seems to be a good example. He came across as being decent enough, assuming you could get past the dubious aesthetic effect of his facial artwork and assuming that you failed to recognise any of the symbology. The fact that he was friendly to the black bloke makes me think that he may be a little "confused" (to put it kindly). How does he reconcile his instincts as a human being with the ideology which he apparently embraces? It is of course highly unlikely that he understands anything about Nazi ideology (see above).

The whole thing is compounded by the kind of people who froth at the mouth in their "anti-Naziism". It seems to me that at best they are well-meaning but as historically clueless as the people they oppose. At worst they are the equal but opposite of the original Nazis - think SWP.

The conclusion I've come to over the years is that both ends of political extremism are incompatible with a liberal democratic society which spans centre left to centre right. Both extremist roads lead ultimately to death camps or gulags. It really doesn't make much difference if its far right cyanide in your lungs or a far left bullet in the back of your neck that helps you shrug of this mortal coil because they are two sides of the same coin. In moral and ethical terms I can't see any difference between the cancel culture types who prevent academics from speaking and the book-burning brownshirt hordes.

"A plague on both your houses" seems to catch it for me and I suspect for most of the British public. At the moment the hard left is the bigger threat to western democracy than is the hard right because it is in the ascendancy but I've no doubt that the hard right will re-emerge one day but it won't be in the guise of overly tattood, ill-educated young men.
Click to expand...

WOW. That is about the most comprehensive and reasoned response I have read.. profound respect!

Just watched it on YT and I can say I was pleasantly surprised! Funnily enough I recognised Emma. She did a few weeks helping out at my old work and was evidently a very skilled and driven individual. I was impressed that most of the contestants got through pretty ambitious projects in such tight time frames as well. I won't pass judgement on Darren because others have summed up the important points better than I could. Leaving that aside, I'm actually now a bit disappointed that we won't get to see more! It certainly wasn't as cringe-inducing as other reality woodworking programmes I've seen. Ah well.
A

R1chard said:
WOW. That is about the most comprehensive and reasoned response I have read.. profound respect!
Click to expand...

That's very kind of you.

Mind you, my half lap dovetails still have a tendency to be gappy which puts me back in my place.

Ah jeez. Could they not just have blurred out the offending tattoos? If one of the contestants was a staunch nudist, they'd have done it then.

I’m not surprised how this played out; as a business (Sky TV) that relies on advertising revenue, then they can’t even slightly be associated with ‘bad things’ that would cause the advertisers to pull their funding.

What I am surprised at is that none of the producers, writers, casting crew etc. Picked up on this, or if they did then they decided that it was worth the risk? If so, then that’s completely on them.

From the episode that I watched, Darren came across as ok, if a little misogynistic (saying women often need a push to get thing done). I wonder if he’s not a far-right, white supremacist, but just not very bright (culturally aware), and chose those tattoos because they were cool and ‘edgy’ rather than his actual life philosophy. I expect more ‘news’ on this, particularly his regret and reformation. The tabloids would eat that up.

An investigation into a contestant's tattoos says they "could be connected to far-right ideologies".
www.bbc.co.uk
Sky will not be showing any more of the series.

Wonder if they'll shoot another series?

And if they do, will any of the original group come back. Would that give them an unfair advantage?

Can you imagine the screening process they'll put potential contestants through now - 'Yes, yes, that's a lovely tatoo of a rose but my great, great,,,,,,,,,,,,,,grandfather was a Plantagenet and we've been caught out once already, NEXT....'

This is not so fanciful ^^. We can have all kinds of stuff in our history and be unaware. Who knows what the next woke trend will be? I used to think the French were a bit rude, overly fond of female body hair in the armpit region and a tad garlic fragrant. Then some enthusiast relation started researching our history a bit deeper than hitherto and discovered I am descended from Normans and the family eventually landed in Ireland in or around 1066 when we had a bit of trouble over here. Thus I now have an identity crisis of Viking/French/Irish before finally becoming English. This has all kinds of historical risks attached. Luckily I have no tattoos. And I am now a Francophile obviously.

I feel sorry for the youth of today who grew up with 'online'. Everything they have ever had an opinion on will have been recorded and will always be there for someone to dredge up later in life. Never allowed to grow up and develop!
T

Mead Camans said:
If one of the contestants was a staunch nudist, they'd have done it then.

I'd love to see the risk assessment for that....

AJB Temple said:
I used to think the French were a bit rude, overly fond of female body hair in the armpit region and a tad garlic fragrant.
Click to expand...

Hmm, going by that perhaps I’m closer to being French than I originally thought

It’s an interesting topic though, should we be held accountable for previous opinions (perhaps not actions) even though they may be a totally reformed character? Having known very staunch racists and homophobes in the past who have totally changed and shed their hate I don’t think it’s totally impossible but if you got it plastered all over your face it’s a bit harder to hide from your past.

I am left wondering if this is the programme Felder/Hammer had supplied machines for. There was no sign of them in the first episode so hopefully not and there is another woodworking offering in the wings.

Blackswanwood said:
I am left wondering if this is the programme Felder/Hammer had supplied machines for. There was no sign of them in the first episode so hopefully not and there is another woodworking offering in the wings.
Click to expand...

Bet you a pound it was this show
S

bjm said:
What if he was the winner?
Click to expand...

Yea he did; it was a lovely scene - he must have spotted someone he knew in the crowd as he raised one hand up to give them a wave.

Felder Hammer in the background behind spiderman. 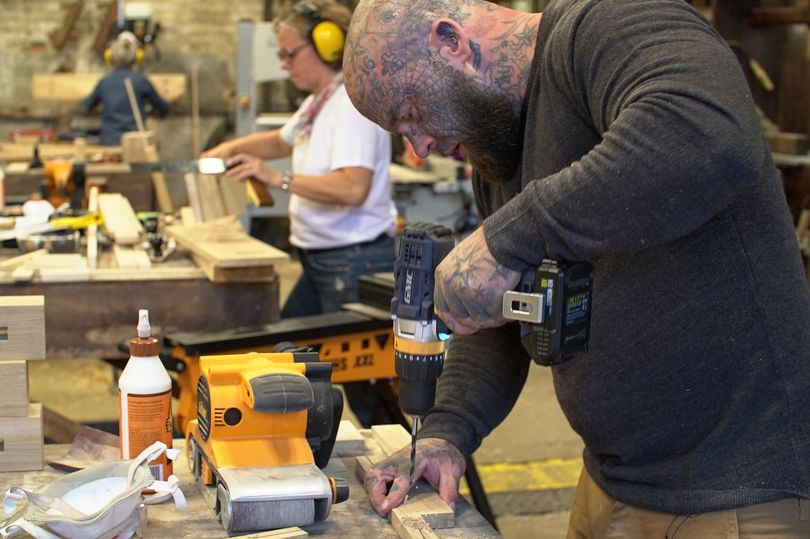