Hi all, I’ve just picked up an old plane on Facebook marketplace and wanting to try and restore it. I think it’s a Stanley (the iron is anyway) - I’ve gone through the online flow chart identifier and I think it’s a type 4.

unfortunatley the handle has been snapped off at some point. There doesn’t seem to be a threaded rod or screw for the handle, but it seems to sit inside a recess - would it be a case of just chiselling this out and replacing by ‘sliding’ a new handle in?

unless I’m completely wrong and it’s not a Stanley at all…there are no numbers or makers marks, although based on the size (44cm) I’m guessing it’s a no 6?

Any advice on getting this in working order? Anyone refitted these handles before? The sole doesn’t seem to bad, mostly surface rust I think. 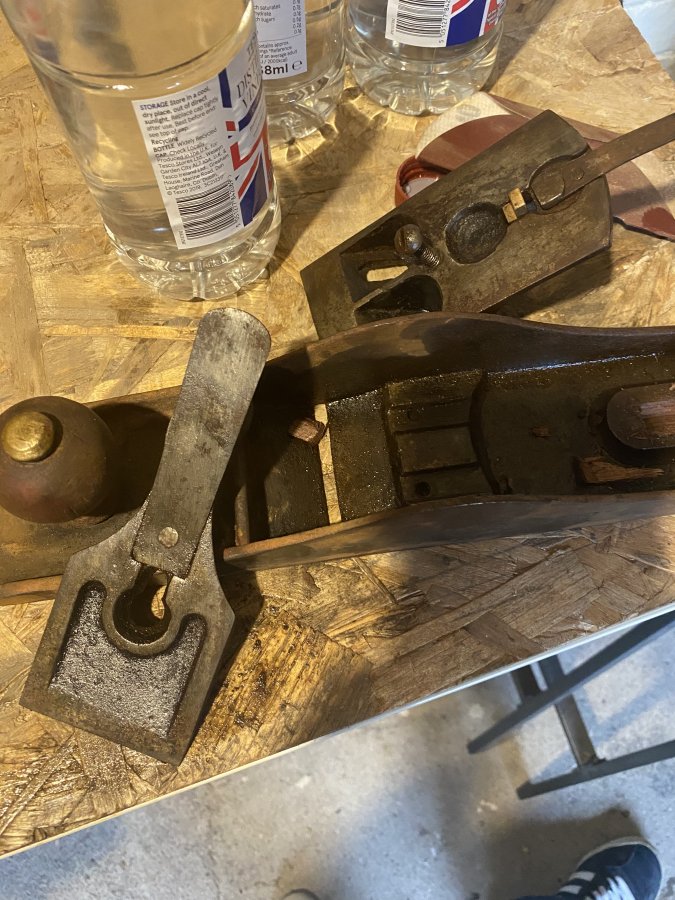 I don't have any advice - (plenty of plane restoration vids on YT) - but that unusual looking frog caught my eye.

It looks a bit like this one, without the bottom cut out.

Could be a record, yeah - the iron is Stanley but is maybe newer. The adjustment wheel looks different to the photos of the type 4s I’ve been looking at too. Also, think the type 4 was before the lateral adjustment lever too.

I don't think there are many planes which didn't have a screw in the tote.
Are you sure there are not some threaded holes under the timber?
Had a look at some Union planes, but they seem to have one.
Very unique frog, surely @AndyT would know, if he's about.
P

I haven’t dug the rest of the wood out yet but I don’t think so - it’s snapped clean off so I don’t see how you could tighten them up if they are under there. Would be interesting to get an accurate make/model of it.

I wasn’t sure whether it was just a cheapo one at first - maybe it is!
P

So, wood dug out, and no sign of any threaded holes. Definitely seems like the handle just slides in
P

That ain't a cheapo plane, close to a bedrock in terms of build, which is more expensive
Solid frog face also, suggests it's a hundred years old anyways.
I tried a few searches using keywords like gunmetal or plane kit with no luck.
Have you tried "the other place" for an answer, a lot of old the hand tool enthusiasts seem to be hanging about there now.

Thats not a production Stanley, Record, Woden, Marples, or WS.
The handle, and Lateral lever will eventually identify the maker.

The lateral lever is very plain - no makers marks or anything. It’s just a flat bar that’s bent over at the tip to make a handle.
B

The Lateral lever does what is required, although the rounded end appears to be upside down, for smoothest operation. To my eye it looks, as it was designed to be.
As I look at the photos,the more I see of unique features, that will identify the maker.
However, the broken handle, would appear to be weak point of design, so not many made, and less surviving.
Dating, I would put it either, before 1930, with the handle trying to get around Stanleys patents, or just after, as the patents ran out, hence the rise of Record, and others.

I cannot think why but some of the older Traut plane designs come to the fore.

But a question to the OP........ That handle seems to be fixed with a tight fit in a dovetail-type key-way, the obvious problem would be that it was not a strong union without screws, however, as you said that the handle split, it left a stub behind which gave you some issues, so there was a tight bond.

how was it done?

The question that occurs to me and is not obvious from the pictures, is was the handle grain in the remaining stub at right angles (i.e. vertically up-and-down) or was it parallel with the base?

If I understand you correctly, I think the first attachment shows the grain running parallel
P

Yes, it’s a dovetail shaped recess - I assume the handle was just shaped to slot in tightly and yes, with the grain parallel. It must have been a tight fit as it snapped and left the stub, as you say. I imagine if it’s shaped carefully enough and wedged in tight it must just keep its position, I suppose you are only ever pushing it further and tighter in as you use the plane. Unless it was glued with something? Although it chiselled out fairly easily

Thank you both for the comments about the grain.
Either way that you think about it, long grain or short, if the wood is stable it would be a solid fit, though not entirely open to mass production.

Justus Traut was an early American designer of tools and sometime associate of Leonard Bailey and 19th C Stanley Rule Company.
He held numerous patents on tools.
...... it's the sort of thing that would come from his fertile efforts!

Paul Sellers, youtube, makes a new handle for a number 4 - I couldn't find it with a quick search.
The long bolts are available on line.
A

..... back to Picalilli, - if you intend making a new handle and if you extracted the old stub in one piece without damage to the base, then you have a ready-made template.

Argus said:
..... back to Picalilli, - if you intend making a new handle and if you extracted the old stub in one piece without damage to the base, then you have a ready-made template.

Good luck and please keep us informed!
Click to expand...

I imagine I’ll have to try and make a new handle, although I’m still pretty new to all of this so how successful I’ll be remains to be seen.

Ill update if I have any more joy identifying the maker. I might post elsewhere online too and see if anyone knows. Maybe once the rust is removed a makers mark will show itself somewhere.

Yeah - it would have been a good idea to try to remove it in one piece…I unfortunately didn’t think that far ahead and just chiseled it out. Probably should have stopped by here first!
A

Well, the fact that you had to demolish the whole stub to get it out speaks volumes for the solidity of that original fitting...... and by extension, a thought to the memory of the man who made it all those years ago. I'll warrant that it was not made by a machine.