Does anyone know anything about septic tanks or small scale sewage treatment? I've got an existing blockwork septic tank that discharges to a local ditch, but from Jan 2020 I don't think that this is allowed so I'm looking ahead at what my options are.
At the moment it's all a bit overwhelming - particularly as all the useful looking info seems to come from manufacturers who clearly have vested interests.
Anyone got any useful info or experience please? I'd also like to do as much of the work as possible myself (for both cost and access issues which is via a neighbour's land), so any tips on that would be appreciated too please.
O

My father has a business dealing with this kind of thing.
One of the products that he installs is called a Mantair unit, which essentially turns a septic tank into a treatment plant.
It will need a power supply to power the small air pump.
I hope that is of some use.

There are lots of good electric sewerage treatment plants these days. Go for one with an external pump rather than having the mechanism integral with the tank. It makes servicing and replacement so much easier and cheaper. I bought mine for just over £2000, and used 2 or 3 tons of concrete in installing it. You will need a digger, and some knowledge and experience helps it getting it in the ground properly and keeping it there.

I know nothing about an upcoming changes to the regulations, so if I were you I would contact the Environment Agency and seek clarification. It's very difficult to see how they are going to enforce such change on the hundreds of thousands of systems discharging to ditches currently.
B

Mike, it's under the "General Binding Rules" which basically mean that anyone with a traditional septic tank (that discharges to anywhere other than a specific drainage field) needs to do something about it before January 2020. I can't really see how the Environment Agency are going to enforce it other than by penalising anyone who asks about and therefore raises their head above the parapet :?
https://www.gov.uk/guidance/general-binding-rules-small-sewage-discharge-to-a-surface-water
The product I'm currently looking at is a WPL diamond because they seem to be a well designed bit of kit by one of the big players.
B

oakfield":2rhidzcy said:
My father has a business dealing with this kind of thing.
One of the products that he installs is called a Mantair unit, which essentially turns a septic tank into a treatment plant.
It will need a power supply to power the small air pump.
I hope that is of some use.
Click to expand...

Thanks Oakfield, I'll have a look in to that product, although on first look it seems that I would require a "permit to discharge" from the EA with that product, and I don't know how easy that would be to get.

BigMonka":33tqu10p said:
........The product I'm currently looking at is a WPL diamond because they seem to be a well designed bit of kit by one of the big players.
Click to expand...

That's what I have. Super bit of kit.

I don't want to get all lawyerly, but there seem to me to be lots of circumstances in which you can continue discharging to a ditch. Does the ditch have running water in it? If not, it's arguable that you aren't discharging to a "surface water".

Discharges from septic tanks directly to a surface water are not allowed under the general binding rules.
Click to expand...

I think you need specialist advice about your own particular circumstances. If you were in East Anglia I would know where to send you for that advice, but I have no idea who you should talk to in Yorkshire.
B

That's interesting Mike, I'd assumed that it was more black & white than that.
What profession would your East Anglia contact be? I don't know how to find anyone who isn't basically trying to sell me something!
R

Very interesting thread, this. Albeit a bit concerning.

MikeG...how much does a WPL Diamond cost ?
J

As a woodworker producing lots of saw dust a composting toilet could be good. A bit of a commitment to environmental issues but you'd get some lovely carrots!
https://en.wikipedia.org/wiki/Composting_toilet

RogerS":2wg8l2fm said:
Very interesting thread, this. Albeit a bit concerning.

MikeG...how much does a WPL Diamond cost ?
Click to expand...

I think I paid around £2200 for mine. The concrete surrounding it probably cost £200. Then there is the digger and the muck-away charge.
R

Having dug a bit more I came across this rather excellent site that clarifies what it's all about and without too much sales hype.

I was delighted to see that they're not a million miles away from me and so I'll be asking them to come in for a looksie. And not too far away from the OP.
D

Hi,
Can I jump on the back of this thread. I have a field.
I need to put in a toilet to cope with about 10 people using it per day, it is a business so no they can't squat in the ditch. No mains so it has to be self contained, what system would people opt for?

doctor Bob":38jr1s77 said:
Hi,
Can I jump on the back of this thread. I have a field.
I need to put in a toilet to cope with about 10 people using it per day, it is a business so no they can't squat in the ditch. No mains so it has to be self contained, what system would people opt for?
Click to expand...

There are some very good portable options (subject to planning permission if for more than 28 days per year) e.g.
https://www.luxury-toilets.co.uk/
http://www.posh-loos.com/

Failing that option, either composting or air-bubble-driven STP (subject to planning permission) the latter would need about 200W of continuous electric power (could come from solar) plus water (could come from a r/w harvesting setup) e.g.
https://www.tanksforeverything.co.uk/wa ... ent-plants

I used to have a Klargester rotating blade set up in my two previous houses. They were good. In this one I have an underground septic tank with vent and external pump aerator which works well. We have an environment agency permit to discharge clean water to a ditch, which does not in fact contain running water but is part of a flood defence. I also own the ditch. This was simple and quick to obtain. The system works well.

It is worth noting that if the pump fails for any reason your drains will block quickly. So make sure the pump is accessible and that you can get and fit a spare quickly when needed. You will also need to have the unit pumped out, probably annually, depending on size and usage.

You will need to bear in mind that using lots of detergent and bleach products will impair efficiency materially.

This is only the case if your tank is fitted with a lift pump (as well as the aerator, which "treats" the sewerage). Most don't require a lift pump, and if they don't have one, the tank operates entirely by gravity and won't block if anything mechanical or electrical fails.

Our set up is very similar to AJBT's - I installed a Titan tank identical to what now sells as a Clearwater 12 e.g. https://mpcservices.co.uk/clearwater-e1 ... ystem.html To install it, I had to dig a hole with the digger, and then drive the digger into that hole, to dig deep enough (scary but it worked, should have got a bigger digger with more reach!) - I also had a dumper-load or two of spare concrete from another simultaneous job.

I got a consent to discharge into our ditch from the EA - the process was painless but the individual I dealt with at the EA was a bit slow off the mark. The air pump can sit separately at some distance from the tank itself and aerates the pooh-soup as well as lifting the clean(er) water to the output - the system is fail-safe if the pump stops working but obviously starts to get whiffy if left like that for too long. I laid the power cable (SWA) in the same trench as the new run of pooh-pipe.

The thing's been working fine for fifteen-plus years with a de-sludge annually and six-monthly air filter clean/change on the pump. The air pump is extremely quiet and efficient.
R

So just had a quick looksie from a reputable firm. Looks like our vendor either told us porkies when we bought or didn't know the reality...ours discharges directly into a stream. So I've asked for a quote to (a) carry out a formal survey of the system and (b) quote for the necessary replacement.

Roger
I would also be asking your solicitor why they did not ask the question, I have had a few customers, who bought properties in the last few years in England who had to replace tanks on purchase, and got the price reduced to cover it.
This is not some thing that has just been decided.
J

You might have to be careful with one of those huge bottle shaped ones if you are near a stream or high water table.
I saw one installed in an excavation which had filled with water. To sink the tank they filled it with water too and then back filled around it in the normal way.
When they came to make the pipe connections at the top they pumped out a bit of water to get at the joints. Unfortunately they left the pump on and emptied the tank completely and after an hour or so it started very slowly floating back up through the backfill, pulling pipes with it, until it fell over sideways. Like the birth of a science fiction monster from underground! 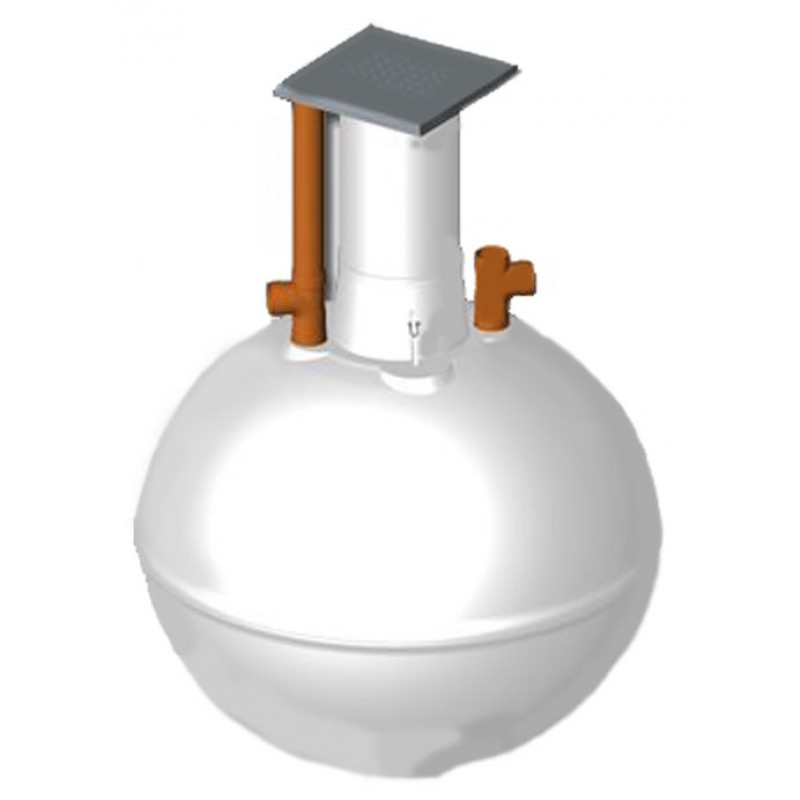