The No80 scraper plane seems to be a tool that few people use judging by the prices on auction sites. I personally find it an extremely useful tool, and one that I reach for often. I’m curious why people don’t seem to value and use them?

The depth of cut can be varied which is achieved by bending the blade with a thumb screw on the back. You don’t have to worry about the blade being knocked out of alignment by a hard bit within the wood (knot for example) creating tram lines due to the edges of the blade catching.

I’m not going down the rabbit hole of how to sharpen the blade, apart from saying that it’s actually very easy, and more forgiving than sharpening a standard blade.

The finish they produce isn’t quiet as good as a well tuned and sharpened plane, but it’s a very close second. It is far superior IMO to that of sandpaper, as it does have a nice gleam, just a shade duller than you get from a plane.

I’m knocking up a sink unit for my workshop out of material I have lying around, and to make it have been using the No80 to finish off edging the MDF and Ply with what ever hard wood I have. 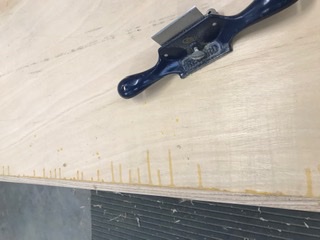 I like to edge sheet material with a good thick bit of hardwood, I find that the units last far longer as all the abuse happens on the edge.

The scraper is ideal for levelling off the applied hardwood without damaging the edge of the sheet material. It also knocks off all of the glue that has run down......I don’t bother wiping it off as I glue up as it’s easier to use the scraper to remove it!

The picture is of the roughly cut edge, the hardwood is actually fitted exactly to the V cut into the sheet material.

Maybe, but I love mine.

Well said, deema - quick, cheap and efficient is a pretty good combination!
Also quieter and more satisfying than a bearing guided router for a job like that.

I bought the Veritas version in the summer and think it is a great tool. I am not a big hand tool user, or a prolific maker but it is one of my favourite.

I use mine a lot, I did have a nice vintage one but sold it and now have the veritas one, love it for the final finish on a hardwood, and it's superb for cleaning up glue lines and old varnish, as you say it's a much smoother surface than sanding. I like it most on reversing grain woods like oak and ash, sapele as well works a treat.

Here's mine in recent use: 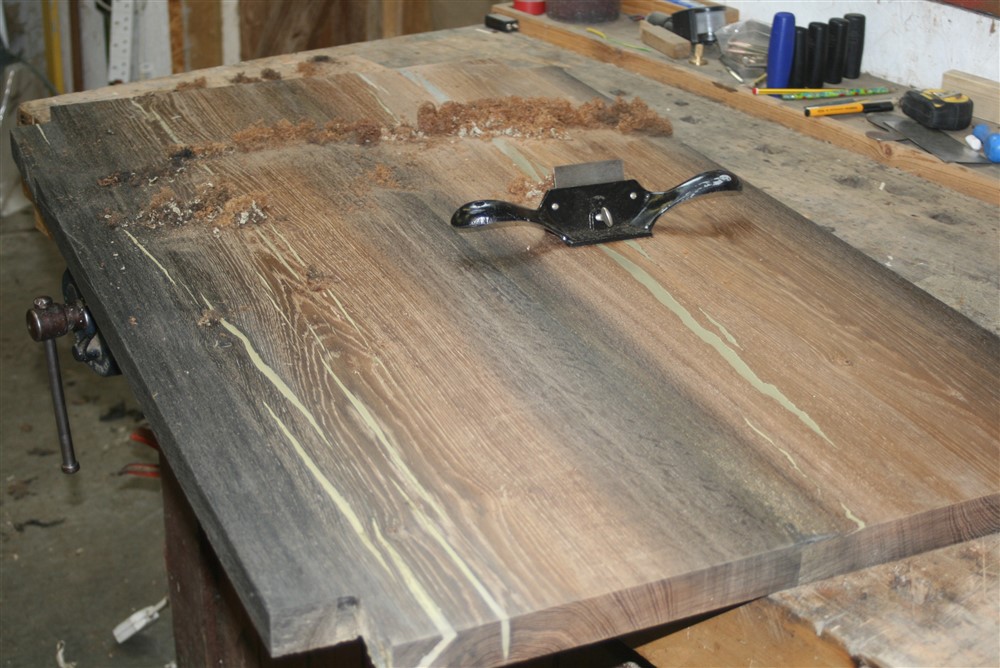 Look half way along the left hand half of this next view of the piece of wood. Away from you is the part finished with a scraper. Near to you is the sanded surface left from cleaning up the resin/ brass fill. The scraper leaves it polished, even burnished, ready for a finish. 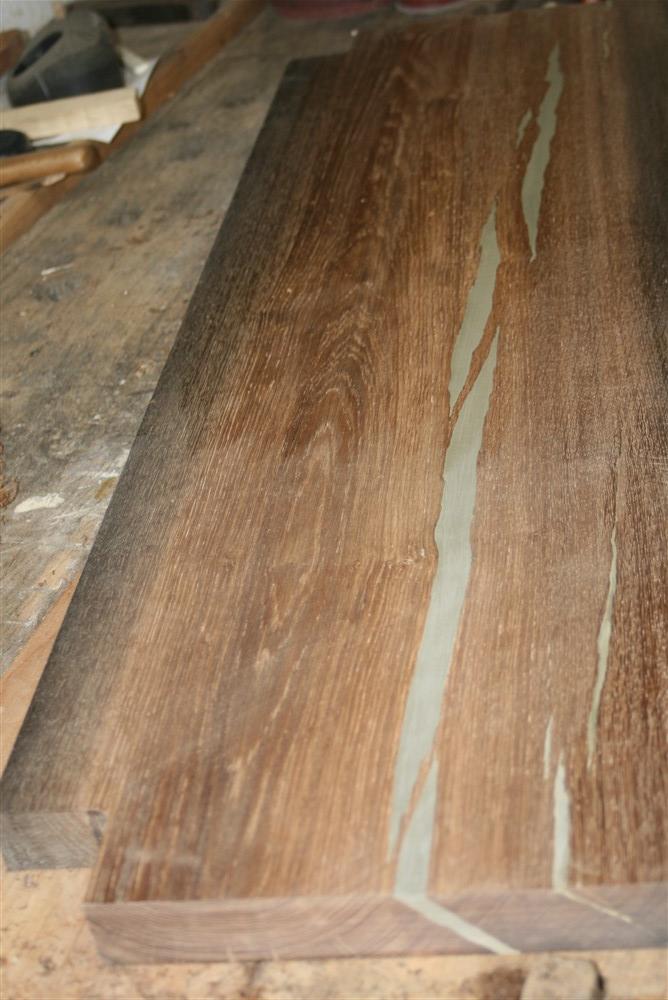 Deema,
I like that v cut edge idea,
Assume it’s done on a router table?

I cut the V’s on a spindle moulder with standard off the shelf 40mm Euro cutters. I believe the same pattern is available for routers.

The V makes it self jigging when assembling as well as increasing the glue area.

Also a big fan of the cabinet scraper, like mentioned its a great tool for flush trimming and far less of a faff than a router.
J

They are handy teamed up with spokeshaves, on curved work. Just did some rocking chair repairs.
B

It's one of the very few planes I've bought new.
Never regretted it. Can produce a finished surface, from a saw cut with one tool.

The No. 80 is one of my goto tools also, when preparing a surface. I bought mine on eBay from a retiring pro, who had sharpened it and sent a very nice note: "I hope this serves you as well as it served me all my 40 year career". Lovely, and indeed it is so serving me.
P

I am not a hand tool woodworker but I do use a few and scrapers are my favourite.
N

I made a cabinet scraper following the instructions in Charles Haywards book, I can't remember the name, but I'm sure most of you know what it is. The blade was made from the cut off end of an old S&J handsaw that had a split towards the toe. The only cost was the £5 for the saw which is good as a short panel saw.

What's the difference between an old Record and Stanley No80?

Stanley don't seem to be so popular with bidders on Ebay.

Jonathan S":s24abf89 said:
What's the difference between an old Record and Stanley No80?

Stanley don't seem to be so popular with bidders on Ebay.

Sent from my SM-J530F using Tapatalk
Click to expand...

as far as I'm aware zero... except the colour, they'll both work equally well, I never had a problem with my stanley no80.

I bought a new one too. And it has always done the job perfectly. I still use the more basic scrapers for smaller work but for larger areas the stanley scraper plane is excellent.
Last edited: 13 Aug 2020
B

Had an interesting time yesterday, mine started to cut only with the corners, taking gouges out.
re-sharpening, no effect, only cutting at the corners, despite screwing the adjuster up tight.
Viewing the cutting edge, it was hollow in the middle, hence only the corners cutting.
Blade, joined as per saw sharpening, to give a flat cutting edge, re sharpened as normal.
Correct operation now restored.
I've had this for many years, sharpened, both re-burred, and full sharpened, numerous times, this is the first time I've had to true up the edge.