We've decided to go down the route of knocking an internal wall down and opening up the kitchen and dining rooms into one.

Have been to several showrooms (all within a 15 min walk from us apart from Wrens and an independent) and looked for 'inspiration' re new kitchen design/layout.

Have been to Magnets, B&Q, Wickes, Howdens, Wrens, and an independent offering Leicht kitchens, we plan to visit a few others in the coming week(s).

Have already ruled out B&Q, Wickes, Wrens (purely on their reviews :shock: ) and have been back into Magnets just this afternoon for another look as Sundays is nice and quiet. The one style we liked though only came in 3 colours, all of which were ummm 'disliked' by swmbo

Doing LOADS of google searching has also thrown up Benchmarx Kitchens and DIY-Kitchens https://www.diy-kitchens.com/?gclid=EAI ... gKJRPD_BwE which seem to attract some very good reviews.

I've CAD'ed up a drawing of what we currently have and a 'possible new layout'. I've given the existing layout to the independent guy and see what he comes up with, but i rather suspect he'll be asking lottery money though.

I think we'll be after what most places are calling a 12 unit kitchen.

Can anyone offer any advice as to who they've had, can recommend/avoid.

I also get the impression its a bit of a 'game' when it comes to costs. Rather like double glazing is :evil: they give you a price and watch to see if you flinch.... then proceed to knock a third(?) off, before settling at 1/10th of the original price

Are you fitting it yourself?

Howdens are always popular with the trades, if you know someone who has an account there (and you trust!) you can get a good deal. Their pricing can be a bit like the double glazing thing you mentioned though, there are 2 Howdens near me and one is usually cheaper than the other.

Good thing about Howdens is they carry a good stock if you need an extra panel or something.
F

just fitted a diy kitchens kitchen in our house. ok maybe not the cheapest but i was impressed with the quality and the one thing I did like was that the website price is what you pay so none of this "sale price" rubbish
i can send some pics if you want to see a finished insitu kitchen.

PS we sourced our own worktops as well
H

Just ordered our new one from a local company

Wren seemed overpriced and poorly made, the “designer” didn’t really have any ideas either
Magnet seemed better, but seemed to focus on the gizmos, and again didn’t feel that robust.
Ikea was interesting and cheaper but again no design. As they don’t do the pricing games it’s useful to get a sense of reasonable price.

The local company were able to talk through what and where and as we wanted to use specific appliances they were able to modify some of the units to accommodate.

--Tom--":juhezv5w said:
Wren seemed overpriced and poorly made, the “designer” didn’t really have any ideas either
Magnet seemed better, but seemed to focus on the gizmos, and again didn’t feel that robust.
Click to expand...

Yes we felt the same with both Wren and Magnet too..... wayyyy to pushy and 'we can do this/that'

flying haggis":juhezv5w said:
i can send some pics if you want to see a finished insitu kitchen.
Click to expand...

I'd like that very much, thank you maybe as a pm or email.?

I've fitted a couple of Howdens kitchens, and I found them underwhelming compared to the Diy kitchen I installed at home. Thinner doors, thinner edging on shelves and carcasses, and foil doors, vs the diy kitchen sprayed doors.

All perfectly serviceable, but I know which one if pick again.
G

We used solid wood kitchens and were really pleased with them.
Fitted it with my brother.
https://www.solidwoodkitchencabinets.co.uk
N

I've fitted around 8 Ikea kitchens, for what it's worth they are (or were) very good quality for a very good price, the only downside is the odd sizing of some of the units (depth wise).
they also had an in store designer for kitchens, he was a mate of mine at the local Ikea which I guess helped. think you could do it online too if you wanted to have go.

We've always used Magnet in all our refurb properties and our own house each time we moved. Never worried about gizmos so not an issue for us. Quality and pricing very good. Never ever had any high pressure selling.

Any issues sorted out very quickly. Installed them all myself and once when I couldn't figure out how to do something, the local branch manager took apart one of their display systems, took copious photos and sent them to me.

Hi guys, many thanks for replies so far =D>

We currently have 2 independents, Howdens and Wickes quoting for us, and we're planning to take a trip up to Yorkshire to have a look at the DIY-Kitchens showrooms/setup.

DIY kitchens, very impressed with the quality of the cabinets for the price.
F 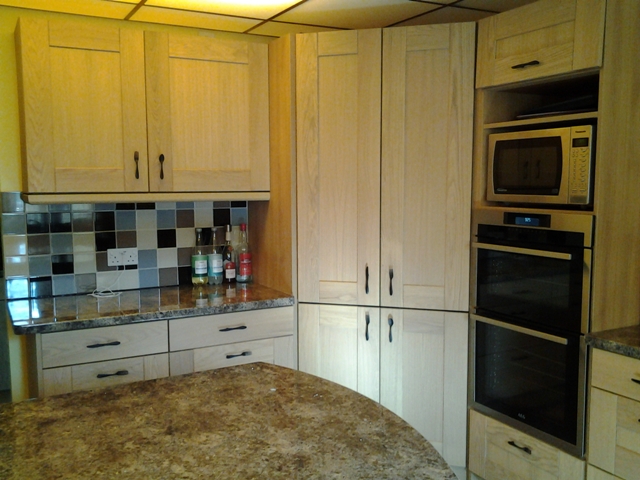 flying haggis":1j8g7bbc said:
View attachment 20190812just a section of our kitchen from DIY kitchens if anyone is interested(I know Nik is)
Click to expand...