I've recently been practicing sharpening with a jig and without and I think I'm coming along.
However I've really hashed up my chisels.

They're now multifaceted with multiple bevels. I wanted to ask if anyone in the Stoke on Trent/Staffordshire area could help me fix them. I don't have the tools or skills (yet) to fix them myself. Is there anyone here who is hopefully close by and available to help me get these back to their former glory. It would be nice to see someone in person with experience and knowledge to learn from them.

Thank you in advance
B

Go back to using the jig, That will show just how far out you are with the freehand skill.
What jig are you using?
There may be advice on how to get the best from it.

I used an original eclipse (non clone). I can get sharp blades from it which are perfectly usable. I just want to fix the damage which has been done from my learning curve.
B

Using the Eclipse jig, will put right any fault, given enough time and effort.
You haven't put a bevel on both sides, have you?
If there is a bevel on just one side, then make sure the back is flat, and has no deep rust pits close to the cutting edge.
Fit the blade into the jig at the longest setting, for it's type, chisel,or plane blade. Set to on the oil stone, untill the angle reaches the sharp end, don't worry about how far up the blade the angle goes. (That area will come right later, and has no effect on the sharpening.)
Reset the blade to the shorter setting, then just a few strokes on the oil stone, will produce the honed edge.
Remove the wire edge, by putting the blade flat on it's back, on the oil stone, and pulling across the stone. Avoid putting any bevel on the back of the blade.

Bod
Ps would like to help more, but I'm at the other end of the country.

I don't trust myself with my chisels on a grinder, so I'll always regrind mine with a jig. (I sharpen by hand, but eventually they hit that point where they need a nice new primary bevel).

As Bod said, its easy enough - just get a fairly course stone, put the radio on and be prepared to put some serious time / elbow grease into it
1

Thanks for the replies.
What would you recommend ? Veritas jig and some really coarse sandpaper on glass?

One of the issues I had was that the chisels never sat 100% square in the eclipse jig and was one of the reasons I had so much trouble starting out. The veritas jig holds from the top of the chisel and doesn't utilise the sides like the eclipse so if my chisel sides are not parallel and straight (which they're not), I should still get a good bevel.
B

Eclipse not holding square, check for paint blobs, in the grooves, remove any found.
One groove is straight, this one sets the angle of the blade, the other is curved, the idea is to grip the blade in 3 points for firmness.
This will also grip an out of parallel blade, which may give a "unsquare" edge.
Never tried a Veritas jig, but am a fan of the ultra simple Eclipse.
If an "Eclipse" jig is giving problems, it's usually a cheep clone copy, of poor quality. Or a cheap lower quality blade.
Stick with the Eclipse and an oil-stone, basic but works.


Bod
Last thought, what colour is your Eclipse?

I've always used this one from Stanley, found it very good for plane blades, chisels are a bit more difficult to set up though. 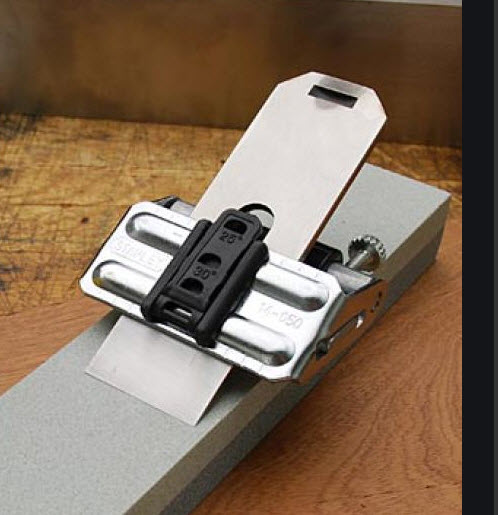 While I was checking to see what an 'eclipse' jig was, google threw this at me

The Veritas jig is very good indeed (I use it with diamond stones from ITS), but I’m fairly sure that you still need the sides of your chisel to be square, as the jig-setter works from the side. I’d have to go and check it, but I think that’s the case.
1

Thanks for the replies everyone I have solved the issue, I found a slightly different style of holder which held the chisel perfectly and didn't require fettling. Both sides of the jaws are deep and parallel, which held my thick chisels no problem. Set to work on a (worn) 400 grit diamond stone and after quite a bit of time I have straight, square and SHARP bevels. Thanks for all the help.

(I've attached a picture of the guide incase anyone wants to check it out, or this post helps future users.)