Hi all, I'm looking to buy my first scroll saw and wanted to get some experienced input before I take the plunge.

One of the things I'm thinking on is getting one with a flex drive OR getting a rotary tool/dremel separate to cover sanding needs (I don't/won't have space for a bench sander and the scrolling work I expect to do wouldn't be suitable for the most part). I wondered if anyone had experience with flex drives and could vouch for their pros and cons vs a rotary tool. Cost is partially a factor (1 tool vs 2) but £20-30 either way is fine for the right setup.

Any suggestions would be greatly appreciated!

For these type machines the flex drive is usually pretty nigh useless in any meaningful way. bit the bullet and get a dremel type but no need to get the brand a copy is just as good. The lidl ones both with cord and with battery are very good and all the dremel shafts and bits fit as well. ~the machines you are looking at are all much a muchness, in that they are all the same design just rebadged and different quality components. go for the best brand name you can afford. Unless you want to step up a gear and get a "proper" machine in the much higher price braket. just make sure whaterver you get takes pinless and pinned blades if possible. Otherwise you will soon be looking to bodge/adapt your machine or upgrade to get the proper flexibility pinless blades give you

@LinleyW: Agree with Droogs about the "Dremel" drill & flexidrive. Re what scroll saw to buy, recommend you look here:

Choosing a scroll-saw. Why pay more? the answer is here. | UKworkshop.co.uk

Personally I would recommend spending the budget available on a good used machine, rather than a new lower spec machine (basically anything under £200 which are mostly the same machines rebadged as said already)

I would agree with what has been said on the flexi drive attached to the machine, all but useless IMHO

I have one of the Scheppach saws you posted (I paid £20), like many of the lower end saws it has the hanger type blade clamps (as attached) for pinless blades, whilst they are just about usable, they are a pain in the neck overall if doing fretwork, the machine is fine when using pinned blades if thats all you want to do 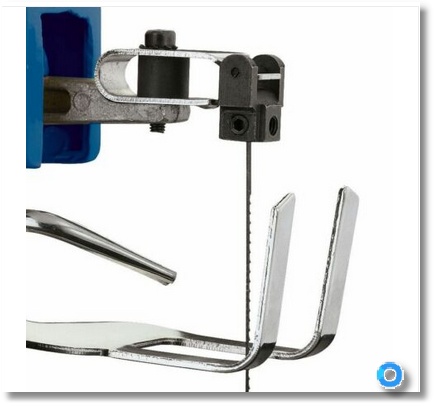 Thanks everyone, will absolutely take the advice and look for some used machines and put the flex shaft aside in favour if a separate tool. Much appreciated
L

Back again, next set of questions - will keep them all in this thread rather than making new ones.

Based on the suggestions and links I've managed to get hold of a Workzone scrollsaw locally (still one of the "your brand here" models but less than retail price and a more sensible entry point for the budget and time I have.

Second hand so only came with one pinned blade - now I expected to break it relatively quickly, as a novice, but as a result of tension and twisting rather than the pin popping out of the hole in the blade . Fortunately I managed to cut some satisfyingly wavy lines on scraps and made (got away with!) a lovely little 2-piece jigsaw

Anyway, looking to get some replacements blades now and working through this guide that @AES previously made (very helpful, thank you!).

Couple of questions I have at the moment plus purchasing checks...


1) I keep coming across reference to "fretsaws" and google recommending fretsaw blades when I'm searching for scrollsaw blades, plus this DRAPER 16" THROAT FRETSAW which, to my eyes, still looks like a scroll saw and certainly isn't a hand saw. Is this down to a mixing of terms since the intricate cutting you can do on a scrollsaw is called fretwork (presumably after hand-powered fretsaws)?

2) pin ended blades seem to mainly come in regular toothed versions, in different numbers of teeth per inch? I've seen one pin ended pack that offers a few skip toothed, but plain ended seems to be where the variety lies?

3) And then, related to the 2 questions above - I've decided to just get some pin ended blades for the moment and get some experience before I look at getting some plain ended blades and clamps. Looking on Hobbies both Draper and Olson sell a variety of pin ended blades but they're labelled as "fretsaw" - presumably they are suitable for a scrollsaw?

For use with Draper HFS/16" FretsawsManufactured from good quality carbon steel with hardened teeth. Blade length between pin 127mm (5")

OK, I can understand your confusion about fret/scroll saws. It's largely a matter of time (years) and place (country).

Back in "the good old days" (say up 'til about the 1940s) and in England, there was a very popular hobby called Fret Sawing. Some companies, especially a company called Hobbies Ltd (still around today) specialised in selling "Fretsawing kits". They ranged from pretty cheap to quite expensive. But basically what you got was a little triangular "thingy" (a sawing base actually) plus a small G cramp to clamp it to the table. You cut your parts out by hand on that triangular thingy. The kit also included a saw - a hand saw of course - which basically looks like a slightly smaller version of a "Jeweller's" or "Piercing" saw. In other words a slightly "springy" frame with a "blade" tensioned into it.

According to the price of the kit, you also got some patterns (to put onto the wood - usually by carbon paper in those days!); plus usually but not always some thin ply; and again according to price you MAY have got some thin hardwoods in the kit too.

AND, for the really rich kids (and their dad's) Hobbies (amongst other firms) produced fretsaw "machines" - which in 99% of cases were powered by your own feet treadalling - a bit like an old-fashioned sewing machine.

But what those machines actually did was exactly the same as the hand fret saw did - move the blade vertically up and down, cutting on the down stroke.

Over in the US of A, the terminology differed a bit, and although quite similar to our own history above, what we called fret sawing they often (but not always) called "Scroll Sawing". Also being a much bigger market in the US, over there some enterprising companies brought out electrically-powered versions of the above mainly treadle-powered machines. They seemed to be called Scroll Saws right from the start, and although I believe originally the term "scroll saw" was mainly a US-only name, that name has very much crept over here.

For example, if you want to look up more info, such as "how to's" etc, Google "Fret Saws/ing" and you won't find much except the kind of hand-cutting I described above. But Google "Scroll Saws/ing" and you'll get hundreds of hits, mostly US sites. And very good too, some of them.

So, in short, "Fret Saws/ing" and "Scroll Saws/ing" are pretty much exactly the same thing - with the EXCEPTION that these days, and on both sides of the Atlantic, the term "Fret Saws/ing" is now taken to mean pretty much ONLY the sorts of patterns with lots of "curly-wurlies", inside cut outs, etc, etc, - i.e. mainly decorative work like letter racks, toast racks, etc, etc.

Whereas the term "Scroll Saw/ing" can mean - amongst MANY other things - Intarsia (pictures); Outlines; bowls; candle holders; ornaments; Christmas Tree decorations; and about a million other things I can't bring to mind off hand.

So again, in short, your Draper 16 inch FRETSAW is actually, to most people these days, and on both sides of the Atlantic, actually a Scroll Saw - they're just using the "old English" name!

About pin end blades, you're right, the sizes, cuts, and TPIs available in the Pinned Blades ranges is generally more limited than with plain ("pinless") blades. And except for the cheapo blades, with the good brands like Pegas you'll find that their Pinned Blades are generally more expensive than their more-or-less equivalent pinless blades.

HOWEVER, you CAN use pinned blades for a lot of general scroll saw work, and it's really only when you're doing work with a lot of fancy scrolls and cut-outs - we're back to "fretwork", sorry! - that you'll really appreciate the pinless blades. You can drill the holes to thread the blade ends through a LOT smaller than if using pinned blades, AND you'll find threading the pinless blades through the holes a lot easier/quicker/less frustrating.

Some good newbie / selection video linked from the scrolling section on this forum.
L

@AES that was a much longer and much much more interesting answer than I expected - thanks for taking the time to write it!

Glad to help a bit LinleyW. As said, I can understand your confusion with different names being used for what is - usually - the same thing.