I assume yours takes a standard 12 inch hacksaw blade?

Whilst it's never going to cut the same as a 2-handed hacksaw, this Milwaukee's by far the best 1-handed hacksaw I've tried. As you mentioned in your original post, blade choice is crucial. Mine came with a 24 TPI blade. The Milwaukee blade was good quality, but not quite as good as the likes of Starrett. But you know more about blades than I do!
A

Great tutorial and many thanks for putting it up.

I went to my first car boot sale in ages today and with this post in the back of my mind, picked up the following: 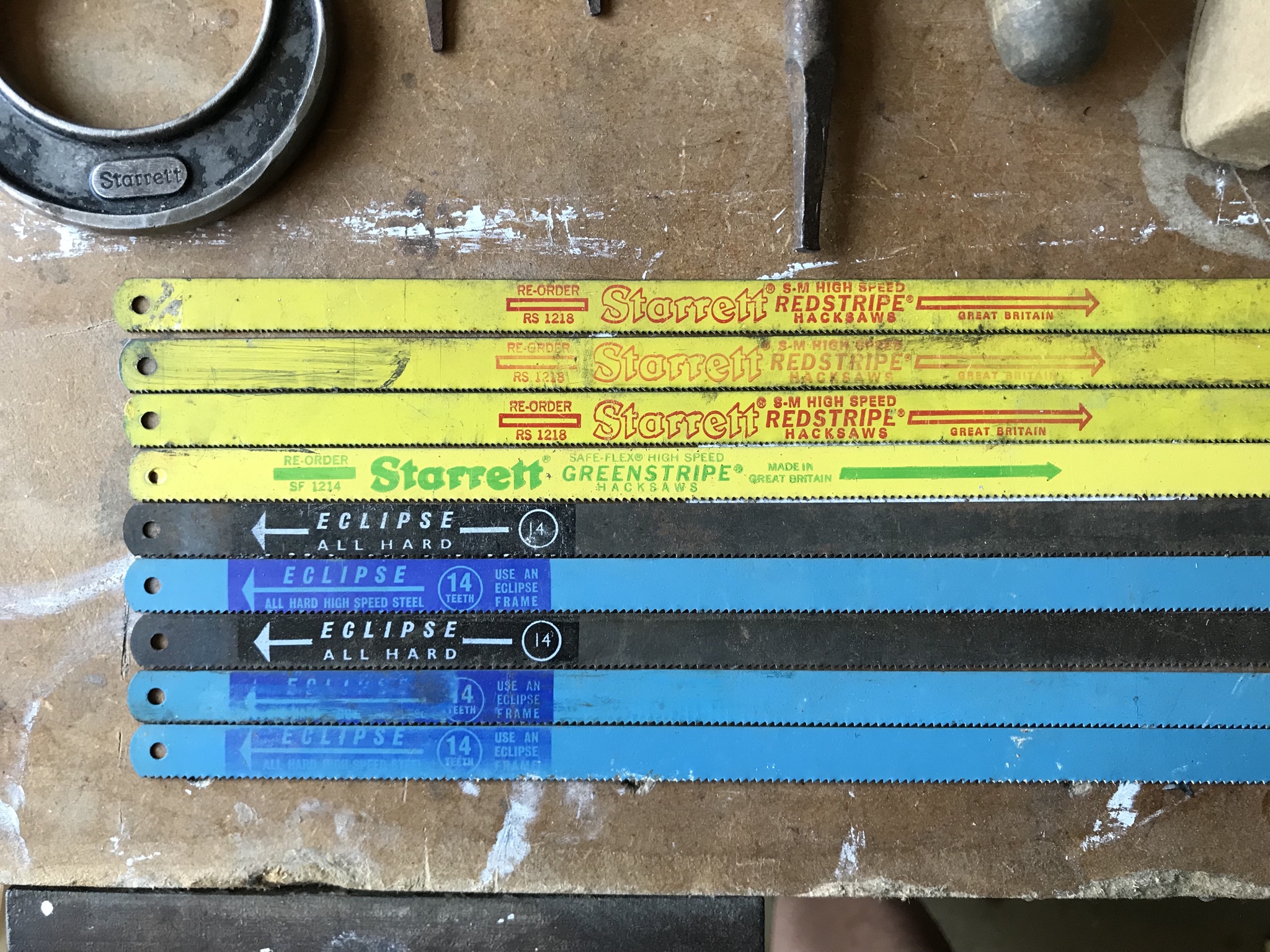 Are they the good ones you were referring to? The brands match but can’t make out if the red starrets are all hard or bi-metal. Also I didn’t realise Starrett made stuff in the UK - thought it was all US based production. Some of them are definitely unused while others may have done some very light cutting (can’t really see or feel any ware on the teeth but smudges on the side indicate some use).
A

Yes, AFAIK, Starrett do (or did, anyway) have a manufacturing plant in Scotland (in Cumbernauld I THINK, where a lot of US firms opened up in the 60s at the time of the UK "new towns" boom).

Taking the blades from the top (nice find BTW):

1. The top 3 are genuine Starrett "Red Stripe" brand "High Speed Steel" ("HSS" or "High Speed" throughout), NOT bi-metal. Along with "Eclipse" brand (James A Neil?) a VERY good brand IMO.

2. The Starrett "Green Stripe" blades are EITHER the "softened" HSS (to improve flexibility/reduce shattering on flexing), OR perhaps the lower carbon MS, hardened and tempered, I'm not sure. They are again NOT bimetal, and as per "my piece", will cut OK but not last as long as No.1 above.

3.The black "Eclipse" (along with the black one 2 below) are both unfamiliar to me (never seen those before). Note that they are both 14 TPI (a VERY useful find for cutting thicker stock) and are marked "all hard" which I take to mean that they're the "softer", (lower carbon MS) not HSS, but have been hardened to improve life but with reduced flexibility. I stress that this is a complete GUESS as I've never seen them before, but unless you can see a very faint "weld" line about 1 mil all along & above the teeth line, then they're not bi-metal (suggest bright light and a magnifier to check that last point - if it matters).

4. The blue "Eclipse" with the clear markings (between the 2 black blades), and the very bottom 2 "Eclipse" blades also (which show slight signs of having been used lightly, because the markings are just starting to wear away) are I'm pretty sure all the same, namely HSS, not bi-metal. So again, they can shatter if flexed or bent too much side to side. Again, somewhat rare these days I think as they're 14 TPI, so they're good for cutting "girt big slabs" of metal. The "all hard" markings, plus the "High Speed" indicates that these are, as said, HSS, which have NOT been "softened" to reduce the shatter possibility.

It's worth note that because those bottom 2 show signs of wear on the markings, they were probably used by someone who "knew his onions" (i.e. he used the full stroke of the saw), and the fact that there are 14 TPI blades in the mix indicates much the same (IMO). As does the lack of any bi-metal blades in that group, so either they were bought by the original owner some time back, before bi-metal (common as ditch water these days), OR that he knew enough about hack sawing that he didn't need to bother with the things, which like most compromises, are somewhat less than ideal!

None of the blades look worn out from you pix, and the HSS blades have lots of life left in them.

Just a word about "HSS" in case you don't know. Normal steel ("mild steel", "MS") has a low carbon content, so is not all that hard. This means that to make a decent cutting edge (not just on hacksaw blades), the steel was hardened and tempered after the cutting edge was formed. In industry, where time is money, this meant that if used at "high speed" (in a lathe for example), the tool got hot so that it quickly lost its hardened temper. So "HSS" was invented, which added more carbon. These tools are simply able to hold their hardened temper at higher temperatures, so allowing the lathe speed (example) to be higher without blunting the tool due to over heating. In our use, such as a hacksaw blade, where temperatures are (generally speaking) lower (!), this does NOT mean that the blade will cut any faster than a hardened and tempered ordinary MS blade - it just means that the HSS blade will hold its sharpness longer than. Later, special alloys such as chrome and cobalt etc, etc, were added to the basic HSS mix, and we're all familiar with things like socket sets being marked something like "Chrome Steel".