I will be surprised if a Lidl vacuum cleaner is capable of moving enough air to keep the inside of the saw cabinet clean, it really needs a high volume of air movement to be effective, you can but try.
R

Two simple mods that have transformed my saw.
It was getting harder and harder to raise the blade, especially at the lower settings. Eventually the handle of the adjustment wheel fractured, time to do something! I was expecting the raising thread to be clogged with saw dust but it wasn’t too bad even though the saw was full of dust. After laying underneath the saw and watching the mechanism it showed that the threaded pinion that transfers the turning motion of the wheel to saw height was a sloppy fit in the slots in runs it was twisting and then getting jammed at an angle. There are two shoulders which seem to have no function as they are so far away from the side slots. 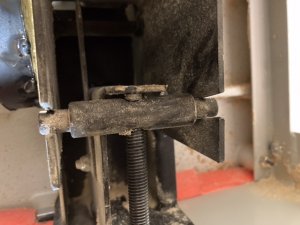 The solution was to extend the shoulders using penny washers to run against the sides. Note that mine was not central so I had to use a odd number of washers. To remove loosen the lock nuts, support the motor, and then you can remove the pinion. 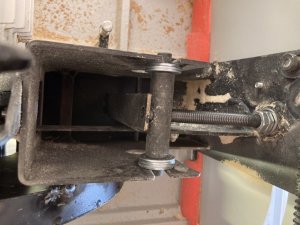 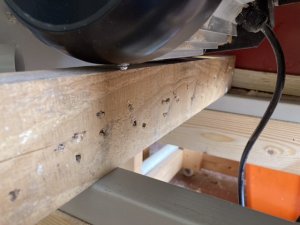 The other problem I had was that during 45 degree cuts you can’t lower blade to be flush with the table top as it fouls internally. I knew this was the internal blade shroud catching on the body. I first tried the saw with the shroud removed and the problem was cured but didn’t want to run it with the belt exposed. I also noticed that the dust sprayed everywhere with it removed. So I used my dremmel to cut the shroud as shown. 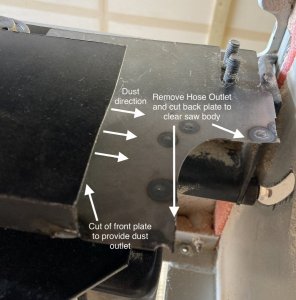 This solved both the internal catching and now shoots the dust straight out the back into the waiting dust port, perfect.