An angled kitchen cabinet with a catch..

..I refitted my kitchen last year with cabinets that i'd made over time. The kitchen is a not-quite galley style, about 11 x 22 but with four doors, so the cabinets are laid out funny - most in an L on one side.

The opposite side, we have a roller, but the Mrs wanted something with more size, so I'm building an angled cabinet with what materials I have left and in order to store big things in the end, it'll have a door. The far end will house a trash can and recycle bin and we'll gain a lot of counter space.

The catch is, aside from one roundover bit (so that the doors match the existing cabinets - those doors were done with a freud door bit set), everything has been done by hand. Since the other doors were done with a router bit set and I've ditched my router table, I made a bouvet (open sided plane) to plow the door groove specifically and cut the raised panels with a bench plane. The other doors were cope and stick type joint, these are haunched mortise and tenon. The face frame of the cabinet is mortise and tenon, and the ply is just good quality fir core A/A cherry. It has very little glue in it and cuts really easily with a hand saw.

The groove in the back (and a second for the floor) is cut with a modified dado plane (I trimmed an old 1/2 inch dado plane so that it's a snug fit for 12mm ply). I have to admit that working everything by hand has resulted in less trouble than the original cabinets that I did with a router. The dado plane never wanders in a dado, the ply cuts easily to a line with a hand saw and easily as accurate as my track saw was. The doors took a lot longer, but they'll look the same as the others to all but the most critical eye.

I did sand on this thing with a power sander, which is a little unusual for me. I don't handle dust that well and have bronchitis right now to compound the issue, but I'm getting lazy. Color on the door picture isn't so great - but they are in a dark basement - they'll be the same color as the rest of the kitchen - just sanding sealer/shellac with crosslinked acrylic waterbase finish.

(kitchen picture is the kitchen as I had redone it - not great angle to look at it, but the kids were standing in the doorway to the right, so I cut that part of the picture out. Low impact kitchen job - left the bulkhead and just replaced what was in it. for no apparent reason, the place I mail ordered the solid surface from gave me an extra sheet. Solid surface is also something that is worked easily by hand - hand saws, hand planes, etc, so it won't be an issue to make an odd shaped piece that matches the top of the angled cabinet).

Just to the right of the picture is two doors, and the angle on the cabinet is simply to maximize its size without making it so that two people can't pass each other coming into the kitchen. 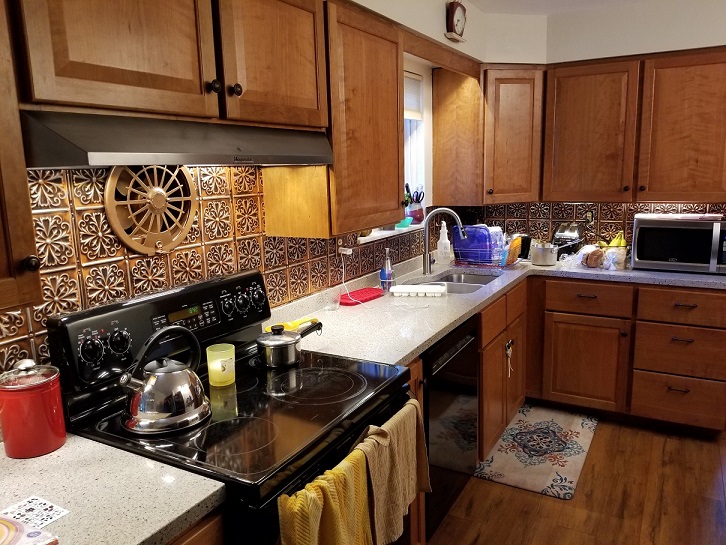 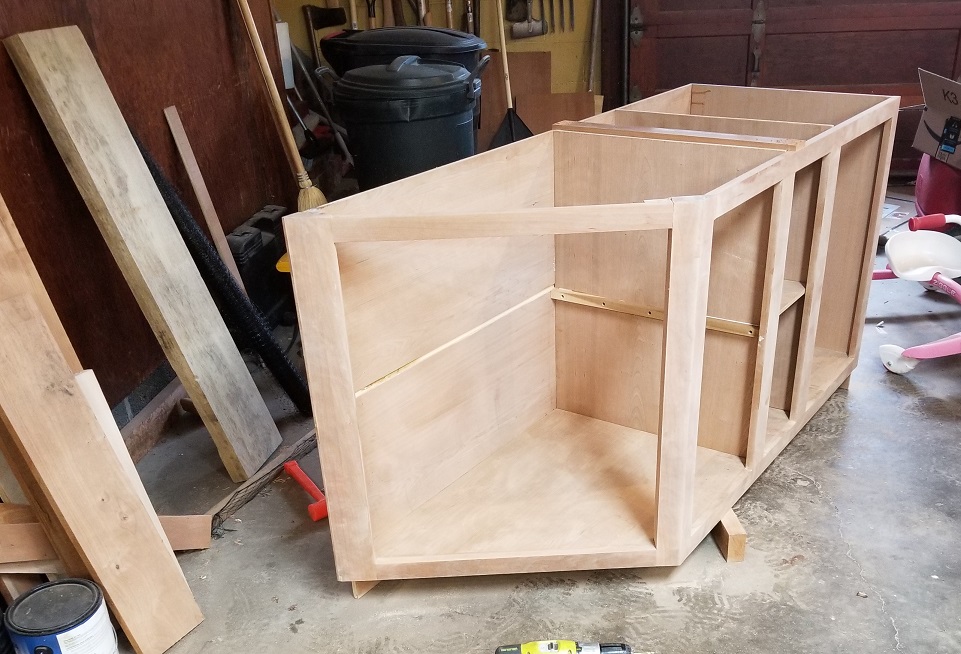 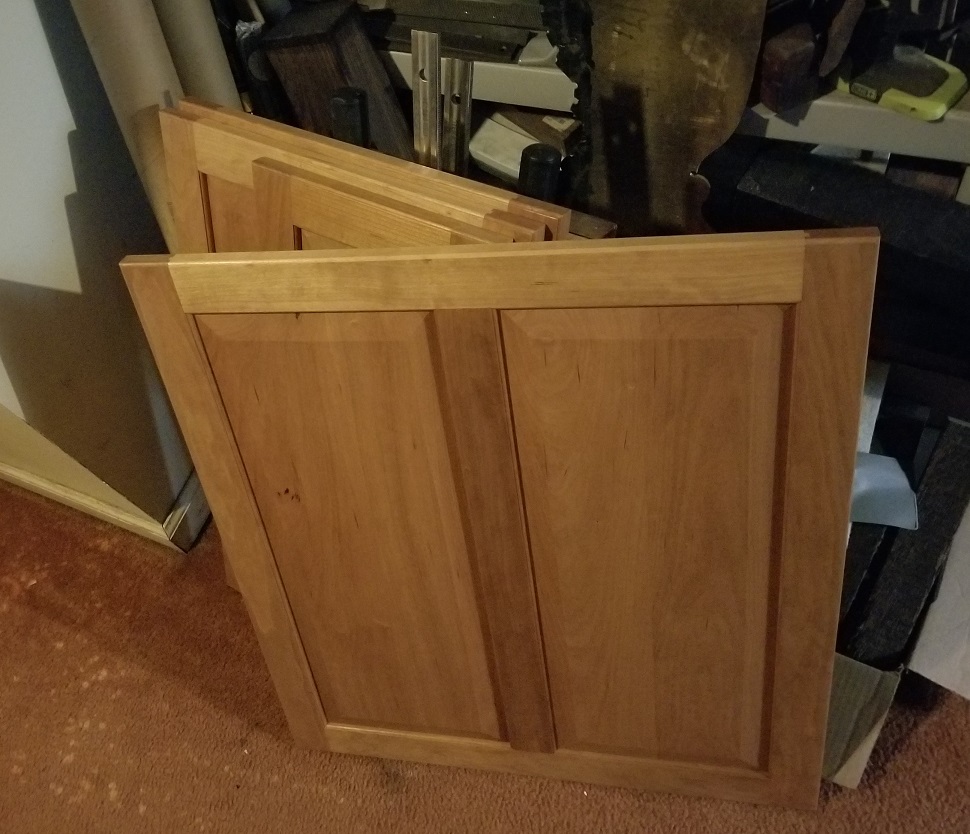 Two points for anyone who can name (the type) the wood standing up behind the cabinet in the shop. The taller board that looks like filthy pine.
S

Hmm, If it had a greener tinge, I would say tulip. But perhaps Maple?
D

I think I'm safe enough just saying what it is - I doubt anyone will guess.

It's black limba / korina. I'm going to make a one piece neck through fender style telecaster with it. It's dead quartersawn and if I snip some off of the top leaving a neck, I'll be able to glue it to the side and then basically cut and sculpt a guitar profile out of it.

Some fellow here in the US is selling all kinds of oddball stuff in quartersawn 8/4 boards for not that much money - cheaper than you could ever find anything on the ground.

Great work and to see the kitchen finished , now back to the shop and get cracking making some more intriguing projects for us to enjoy!
Do we get to see the bouvet?

I'll take a picture of one. They're horrid things. Open sided, and hacked on just enough to get a comfortable grip. But you can make one in an hour, including making the iron, and they are great if you need a really easy to make plain fixed plane. In my case, this will be my door plane. Maybe I'll make a better one sometime, maybe not. But it's a completely fixed plane with an integral fence, operates like a plow plane, but the rail fore and aft of the iron is almost as wide as the cut, so the cut quality is much better than a plow, and it will cut an identical groove every time.

And if you have any scrap material to make an iron it's free to make or almost free.
D

Here is a picture of one from Roubo. I don't know french, so I might be using the wrong word - bouvet may have a more generalized meaning.

Roubo's plate appears to show that the plane is laminated from two pieces. That's unnecessary and I don't do it. Or really anything that makes the plane in the plate look nice. If I'm going to spend significant time on a plane, it'll have a closed mortise and look more like an english moulding plane.

But these serve a purpose. You can file the groove to whatever size you want, and then plow the relief groove between the runner and fence to make whatever fixed set you want. One hour of making and a lifetime of door or drawer grooves. Far better than buying router bits, clean cutting and very easy to use. I cut mine at 55 degrees.

(someone here in the states who actually works in an unpowered shop for a living turned me on to this type of plane as something you can just quickly make for a need, and ultimately get much better results than you would with a plow).
D

It's important that the runner and depth, etc, are right, but the rest of it is just as fast as you can make it. Maybe an hour total. No shaping beyond rounding the back, no fancy wedge, no purpose-bought "plane making wood" (just a cherry cutoff and the wedge is probably plywood.)

It takes me about four times as long to make a nice closed mortise type plane that would look like it was professionally made.

I buy the O1 that's cut and filed to width for the blade in this, so the total cost is probably about $2.

While it's ugly, everything is quick about it (quick groove making, quick making of the plane, etc) and it leaves a far better result than a plow plane. It's uncommon that any chipout around the edges (without a nicker being involved) of the cut would be significant whereas the same can't be said for a plow plane without marking the cut with a gauge first or faffing with nickers. 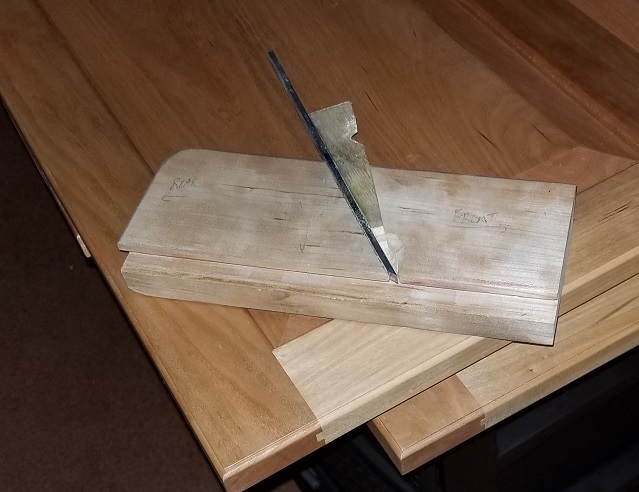 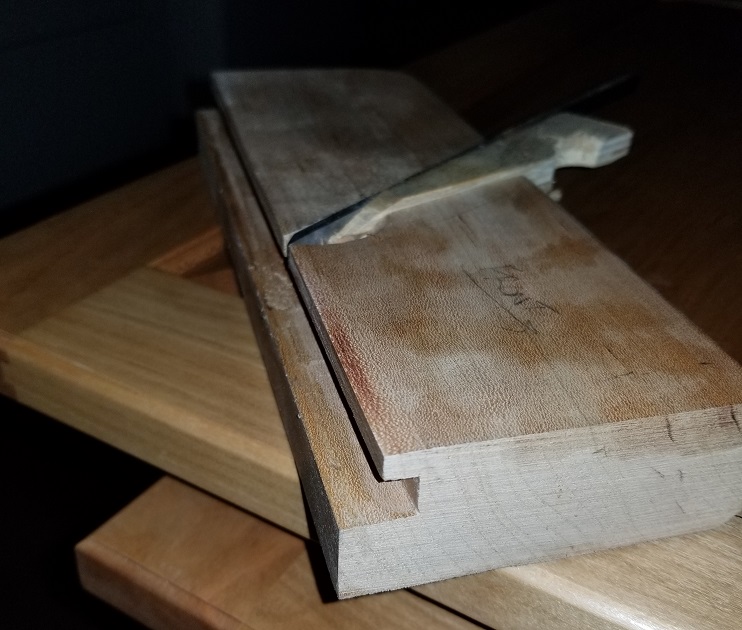