Change to: A job I have kept putting off for years and finally got round to doing it.

When your workshop is too small for the amount of kit you have, each tool should have its designated space with a rule, “When you have finished using it put it back to where it belongs.”

Oh yea? Not in my workshop. I do try, but fail, badly.

One problem is when one obtains a new piece of kit where does it go?
How close should it be to the working area?
Can one stretch out and select it or put it back?

Last year I obtained a second hand Bosch router at the Bentley wood fair. I was so pleased with my purchase (only £10.00) I decided to make a dedicated place for it in the workshop with a drawer to store my collection of router bits. 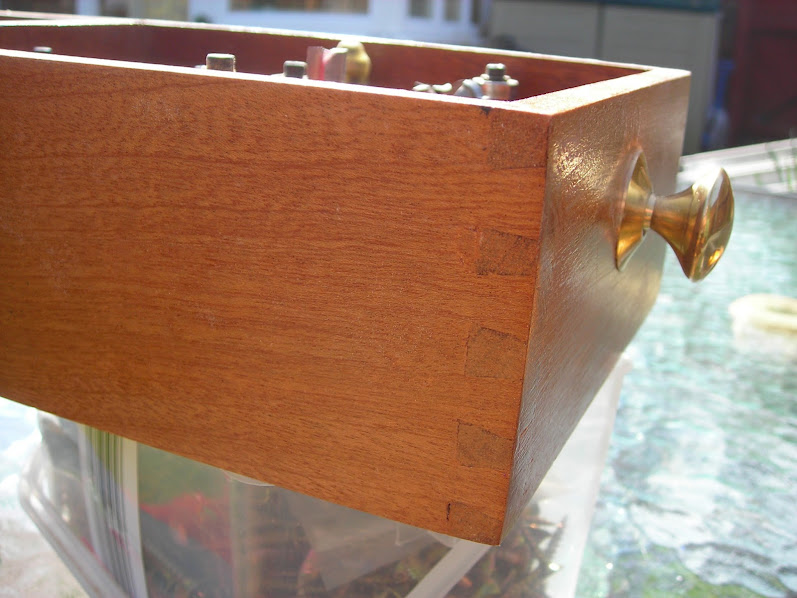 I was delighted with the result and stood there admiring my handiwork but could not help looking at my 40 year old Elu router still in good nick with plenty of service left in it. What had this faithful tool done not to have its own pride of place in the workshop?

So I extended the station to allow this old and trusted router to sit alongside the Bosch, and while I was at it, a space for the future for when I get round to buying a ½” router, maybe a DeWalt or a Festool! I can dream and I was on a roll.

At this time my cordless drill packed in, buying cheap cordless drills is poor economy so off to Screwfix who were doing an offer on a DeWalt model. Too late the offer had ended but they were doing a good deal on a Makita model so I bought that one.

Yes you have got it, I had to build a station for this new piece of kit too and include a spot for my old and trusty Skil power drill. 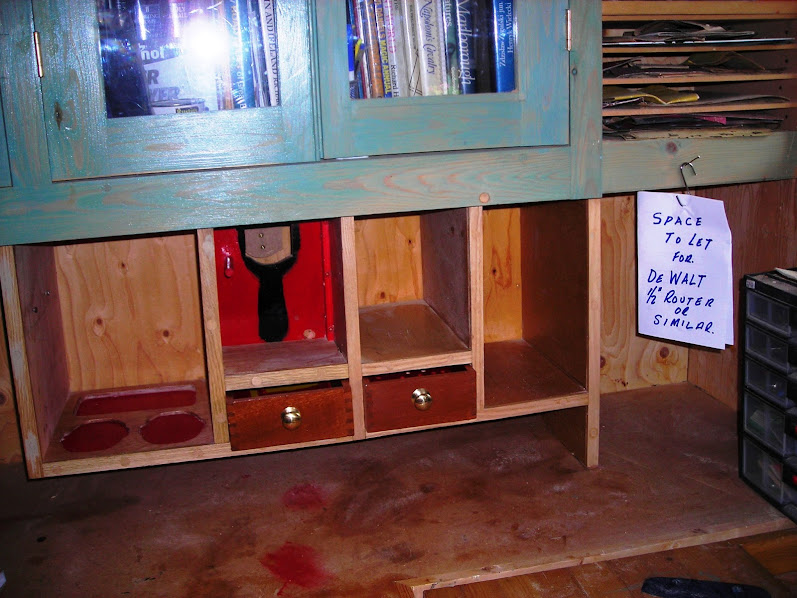 I don’t know if its an age thing but I have three measuring tapes on the go together with two folding rules which during a project I put down and as if by magic disappear. So, alongside the bit drawer I made a measuring drawer so these invisible devises could have their special place. 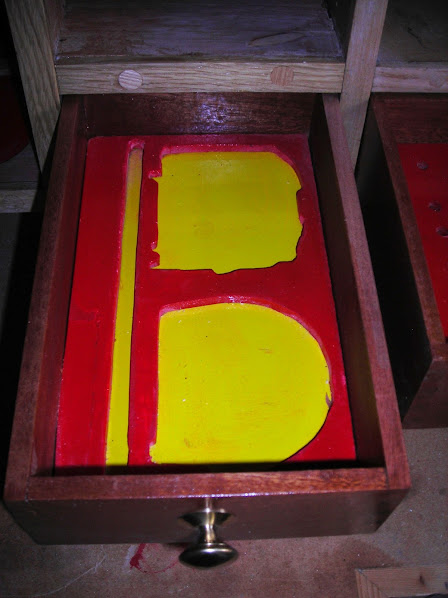 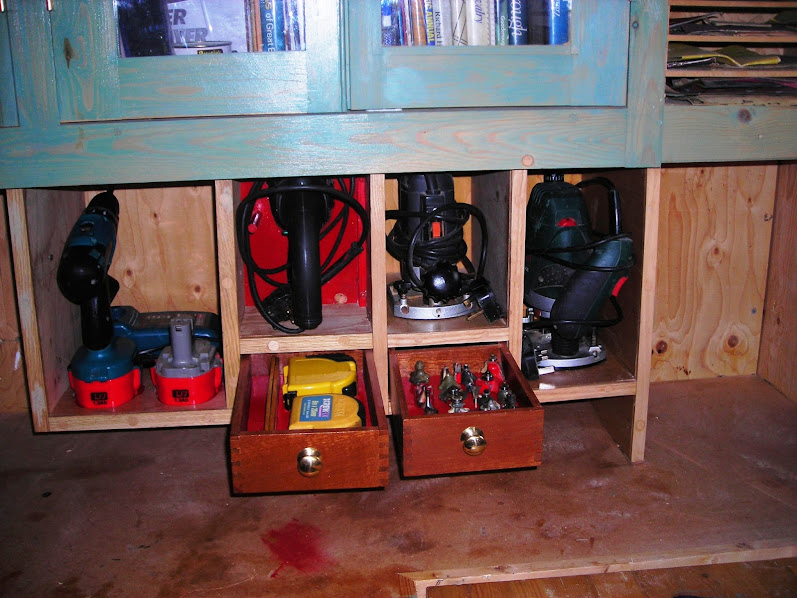 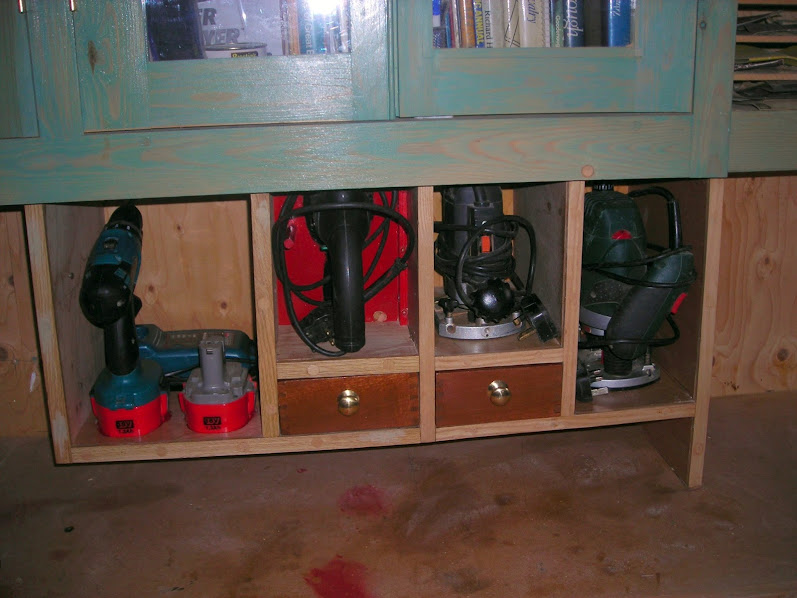 The truth is I am still playing at it and this is what is under my bench and it’s scary. 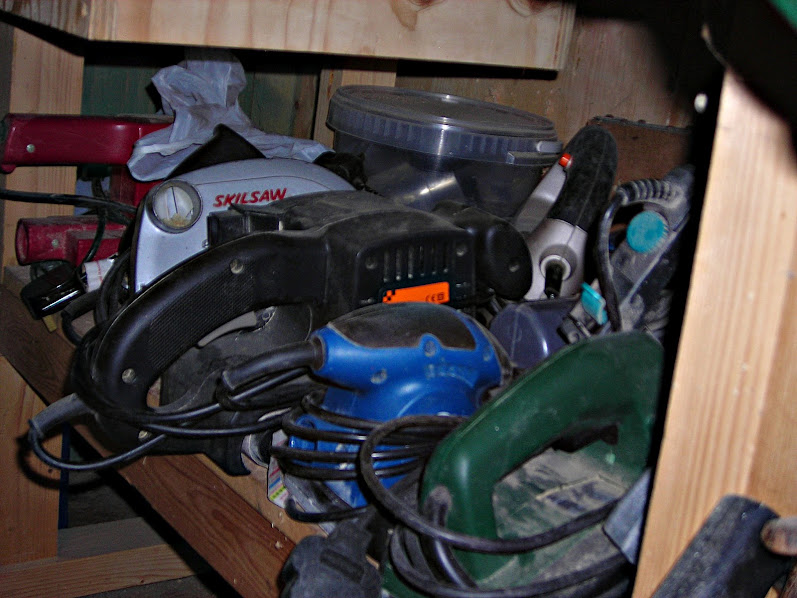 They maybe close at hand under the bench but they collect an awful amount of dust.
Cables become entangled. Cables become damaged and some will not pass a PAT test.
When you want a particular tool it’s a bind pulling out two or three to get to the one you want and when you have used it tends not to get put back but gets in the way on the bench top, or! goes on the floor in risk of serious damage.

The answer is to stop playing about with the new kit and organize ones self and set out my stall for my basic kit.

My first ideas were set down on paper the following being an early attempt. 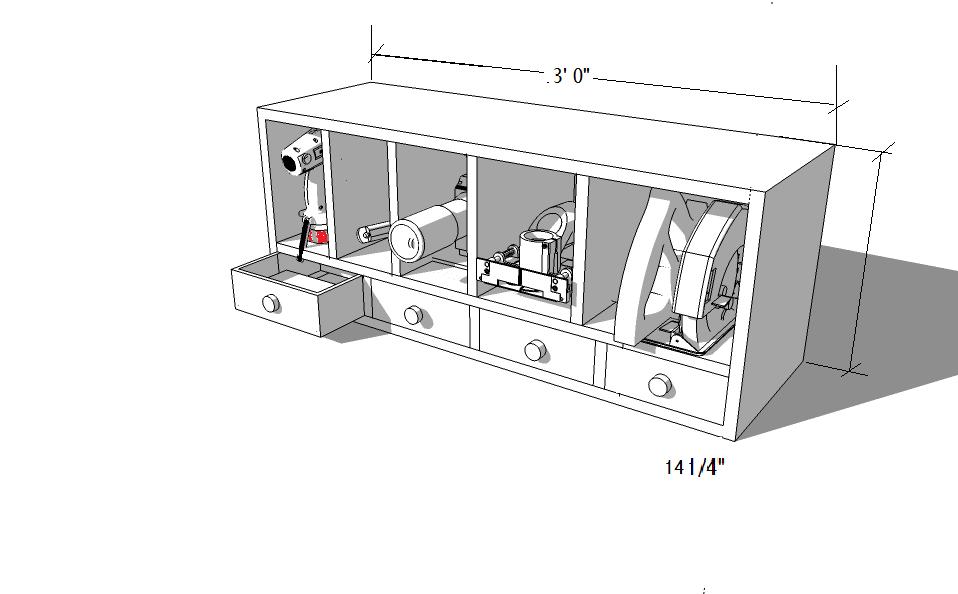 I never have enough drawers to which I find useful. There are always small items which need a home so I put these into the first prototype.

It was obvious that I did not have enough wall space for a single deck of pigeon holes or arms long enough to make the kit accessible so a double deck was included for. Another requirement was for my smoothing planes to be included within the centre of the box. 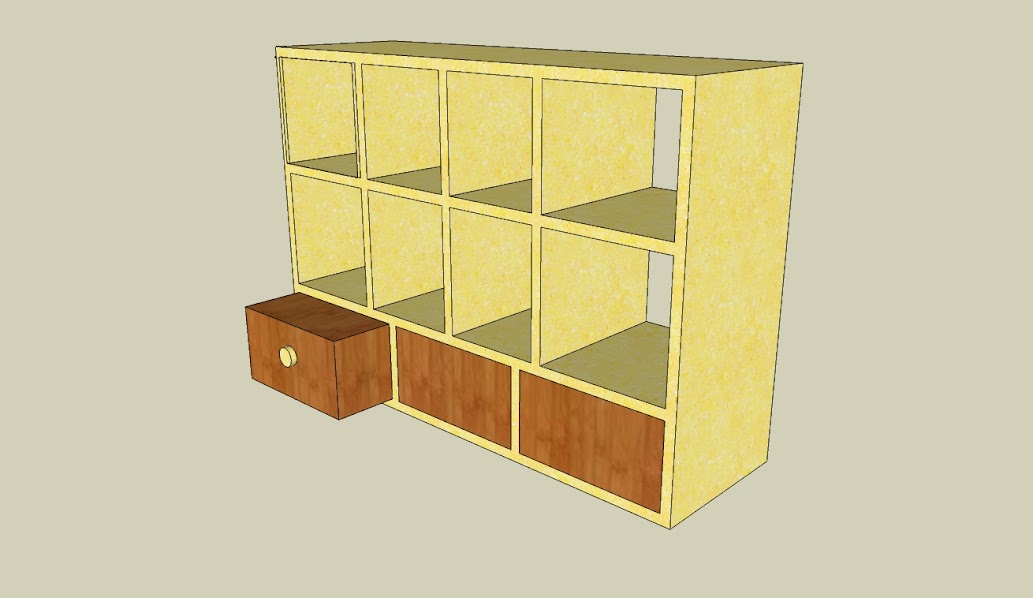 The above gives space for 8 tools and I have at least 12 but they are different sizes and the final size is dependant on what I can cut out of a standard 8’ x 4’ ply sheet. 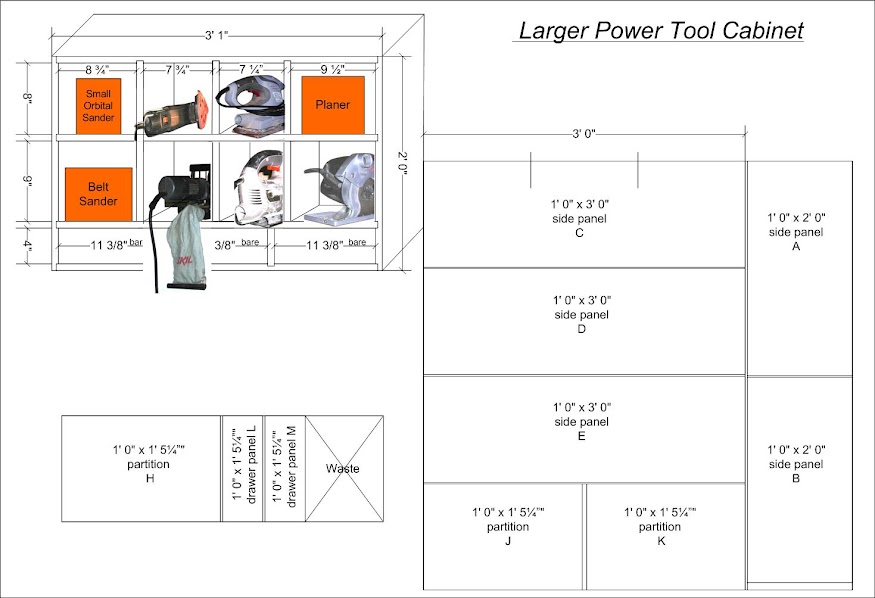 Using the above and laying out the power tools on the ply an acceptable layout was produced.

This being the end arrangement. 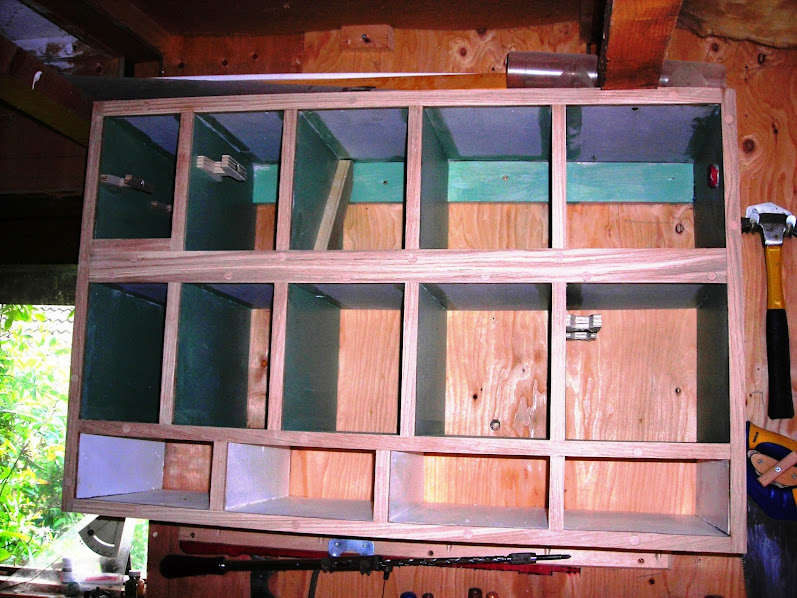 A home is still needed for the contents of this box. 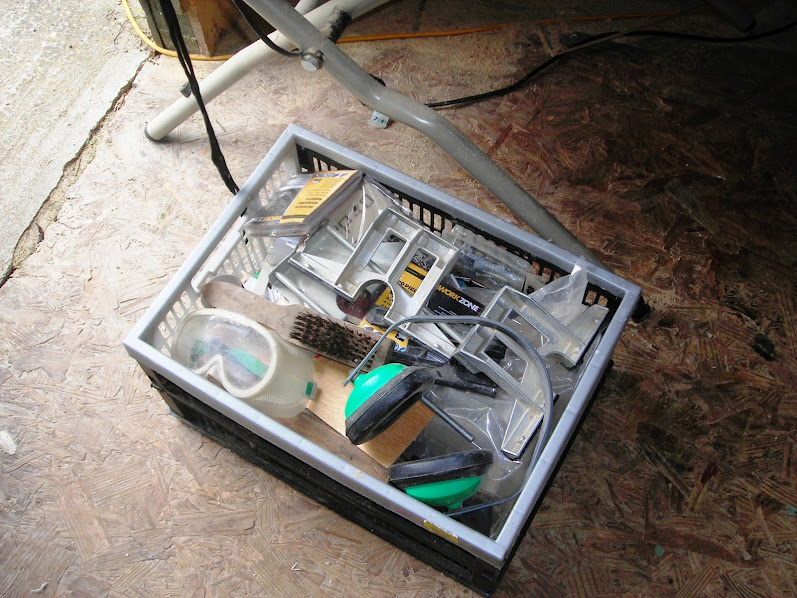 W.I.P. is making the drawers hopefully finding a home for this kit.

All my power tools get chucked on a couple of shelves - as they all have 12' - 15' of flex on them I coil and cable tie it without fail. I had to untangle about eight tools one day - never again! I'm not organised enough to put them in drawers, or make units.
A

That looks great Mike, a well done and very useful job! I need something like this too as all my tailed tools seem to be on top of each other under my bench with all the cables tangled up, it's a nightmare. Good idea to have those drawers underneath for all the bits and bobs. Thanks for sharing, Steve.
A

Now to start fitting in the kit. The first being the detail sander. A bit of a waste of time painting the section as no one will see it. What I did think out during the process was to screw toggles in the side wall for the cable and then in logical progression a cable tidy would be useful particularly when its in the boot of the car. 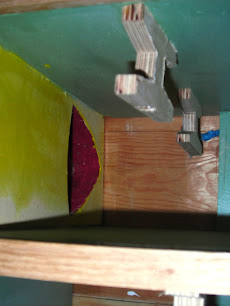 With Detail Sander in position. 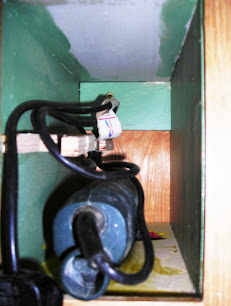 The idea of a cable tidy. 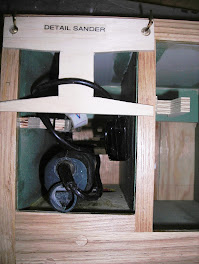 Example of how some of my cables have become damaged This piece of kit will have to be replaced. 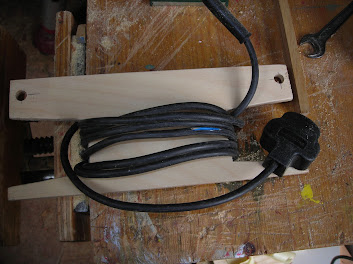 Now this is going too far even if the olympic torch is in Sussex today
Stupid boy. 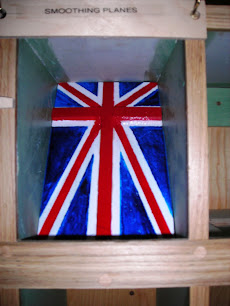 But its a handy spot for the smoothing planes 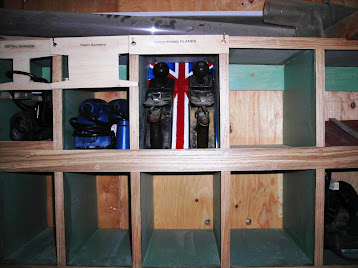 All the power tools are in their respective slots. 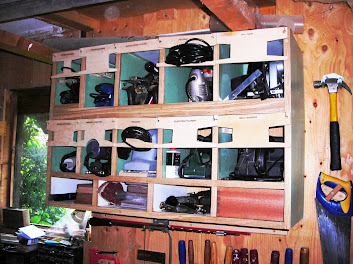 rying to sort out what will go in each drawer.

First and last drawer not decided . Second from left my sharpening stones thinking not a drawer but a pull down front? Would like to keep my block plane here as well. A tool I use a lot and allways misplacing.
Third drawer from the right or second from left I would like to keep the palm sander sheets. There are some measuring calipers to store so I need a place for these.
Its like a moterway any extra lanes get filled up straight away and another lane is called for.

I keep thinking i could be more organised it never happens :roll: :roll:

Where are you in sussex Mike

That's a great job. I so need to do something like this.
A

Thanks guy's I am not organized, this is a real effort for me. I have seen one of your posts john and your workshop gave the impression of being organozed.
This job is like Topsy it never seems to end just like the M25. I had to move tools and racks to position the wall box here, they need a spot. The most essential peice of kit is my dust extraction tbing you can just see parts of it on the top of the box. This will go down the sof the box so the hammer and saw will have to be moved and then theres my collection of cramps. Two other projects in progress are on hold while this work is completed. I will work on the dust extraction next which will then tell me where the chisel rack can be moved. As I say, it never seems to end.
A

The dust extraction tube installed and connected to system. Cant test as power cable needs to be re-directed. To do this need to work outside and its raining. The recent wet weather has meant spending more time in the workshop. 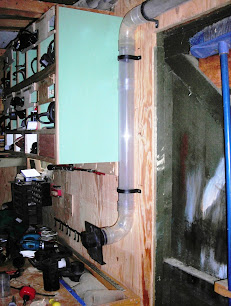 Still have to find a place for hammer and saw and the chisel rack replaced.

I need to think about improving the dust removal from the DeWalt overarm the tube system is not working well thinking of fitting a hopper in the bench top and connecting to the air. Has anyone had experiance on dust management for an overarm saw?
A

In between the rain showers managed to re-route my electric supply the next job tommorrow is to connect the power to the suction unit.
U

Very nice!
I had to have a similar tidy-up after untangling cables & cursing.

I used grooved decking planks so a sheet of ply/ laminate floorboard can be slid down as a cover.

Shelves are 4" apart, one 6" one at the bottom for my router.
2 sets of slightly proud cap-head screws enable an extension lead and charger unit to locate on the top.
Another few proud screws on the sides to hang clamps on.

It's a total lash-up from what I had lying around...and i'm really proud of it

Will post a pic when i can work out how...
A

I will be very interested inseeing your pictures. Try using Google + it does moosy of the work for you.
A

The work on the Power Tool Storage has come to a halt due to reading a post in the general topics regarding dust extraction. The main reason being the re-wiring will require modification in the area of the R.A.S. to where my Cam Vac power point is situated. No big deal but the sooner its done the better. I have also run out of pipe connectors. (Iam sure I have some somewhere? cant find them) So it may be a trip to Axminsters or depending on postal charges, a telephone order to CamVac. I can do a temporary lash up though.

This is a pict of progress to date making racks for the tools I immediatly need and to my right hand. 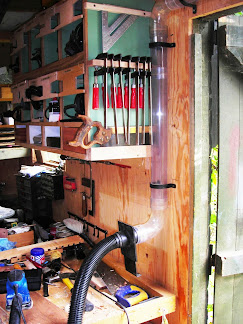 Still have to find a spot for the hand saw which looks like a new door frame which will call for a new door. Another Project! Will it ever end?
You must log in or register to reply here.

A
Bosch gcm sde 305. How much clearence behind saw needed?