Freshly landed in Axminster. and some article about it.

I'd like to know what people think. It's a lot of money, but I've had a dovetail jig in my mind for quite some time. "machine acuracy" is atractive to me, but the gaps in the joints on video looked a tad too big for my taste, and for this money.

Would this be a good purchase? Curently I have a Marita router ( Makita Router RP2301FCX 1/2 )
S

It will all depend upon what you want and expect, at £320 would it deliver what you need, being new to market there is not going to be a lot of feedback and remember it looks like it produces a set range of joints so maybe not that flexable. I use a Woodrat and for Dovetails it is great, plus it can do so many other joints and more so although costing £600 it is very usefull and has got me out of a few issues. The Leigh jig also gets some good reviews.
F

Thanks for the info. That woodrat looks hella lot interesting. I'll be looking into that! Same for the Leigh. Cheers

Whats different to the standard jig that usually goes for a one-er, thats leigh jig money where you can actually produce decent machine cut dovetails, rather than basic poor looking ones?

Axminster had a live session on You Tube today (it's now in their list of videos) that was about 90 minutes and showed 6 different dovetail/box joints that were possible with the different "combs" - all the joints that were made, live, were pretty good . . . although I'm not sure how many you would use? It did look as if the components and build quality were pretty good - and UK made too.
K

I have the earlier UJK model. It looks as though this new one has a few tweaks and additions. I’ve been very happy with mine.

Fanous said:
Thanks for the info. That woodrat looks hella lot interesting. I'll be looking into that! Same for the Leigh. Cheers
Click to expand...

I've an old woodrat, quite unused for a number of years? pm me if you're interested.

It looks like a fine piece of kit to do what it does. I had a perform one 20 years ago that was a forerunnner of that, then a woodrat, now I have neither and use paring blocks as there is no machine (currently) that can give the handmade look I want. Depends on what you want, the jig when set up right will bash out dovetail jointed drawer boxes or similar at a rate no other tool can
Aidan

Good to see it's manufactured in the UK as well.

It appears to be pretty much the same as the original perform jig, albeit with a few better options, ie the flat section to better support the router base without tipping, and different combs, but effectively its the exact same bit of kit.
They fling in the extra comb, which is usually about 50 quid itself, a few more basic cutters et all, but still seems a little pricey.

I've been using my perform one since 2003. It proved very popular, so much in fact they painted it white and added it to their 'trade' section. They changed nothing on it, just the paint job.

From the axminster 2015 cat' they have the excaliber/axminster one priced at £75, and interestingly the UJK one priced at £140. The UJK has the same double sided comb,router support bar and a full length extractor attachment and is pretty much identical to the offering today. Though I find it funny that they're showing it being drawn on cad when in fact its design is identical to the one 2015 a bit of bumpf there.

Today's prices have the original perform one £23 more than in 2015, but even taking the extra comb into consideration, the UJK has pretty much added an £100 to it's 2015 price.

In use the axminster perform one, and the UJK version its all down to fine adjustment of cutter depth, and for that its down to plenty of practice pieces and you will get it as tight as you need it to be. The vid showing gaps was a pretty dumb move by UJK, they could have fettled it tighter but decided not to, for whatever reason, maybe tried it in one take or simply couldn't be bothered.
But a fine adjuster is critical to perfect machine dovetails, and even a minuscule turn on the adjuster will make the world of a difference to the fit, taking into account water based glue will cause some swelling initially and dry perfect fit joints with be tight enough to split the edges of the joint if you dont get it glued up really really quickly.

You can do trenching and sliding joints on the original ax' perform by simply turning the single sided comb around. Its probably never been advertised as being capable of that simply because nobody noticed it could do those joints are the time

TheTiddles said:
Depends on what you want, the jig when set up right will bash out dovetail jointed drawer boxes or similar at a rate no other tool can
Aidan
Click to expand...

Never a truer word spoken.
This was one of my college pieces, and I only had 2 hours workshop time to do all the drawers. Including cutting fronts/sides and doing practice pieces. This is now 15 years old, holds a huge amount of my crud, and is invaluable to me for that. But all the joints are tight, and fine and nothings moved or come undone in that time. It's used multiple times daily. 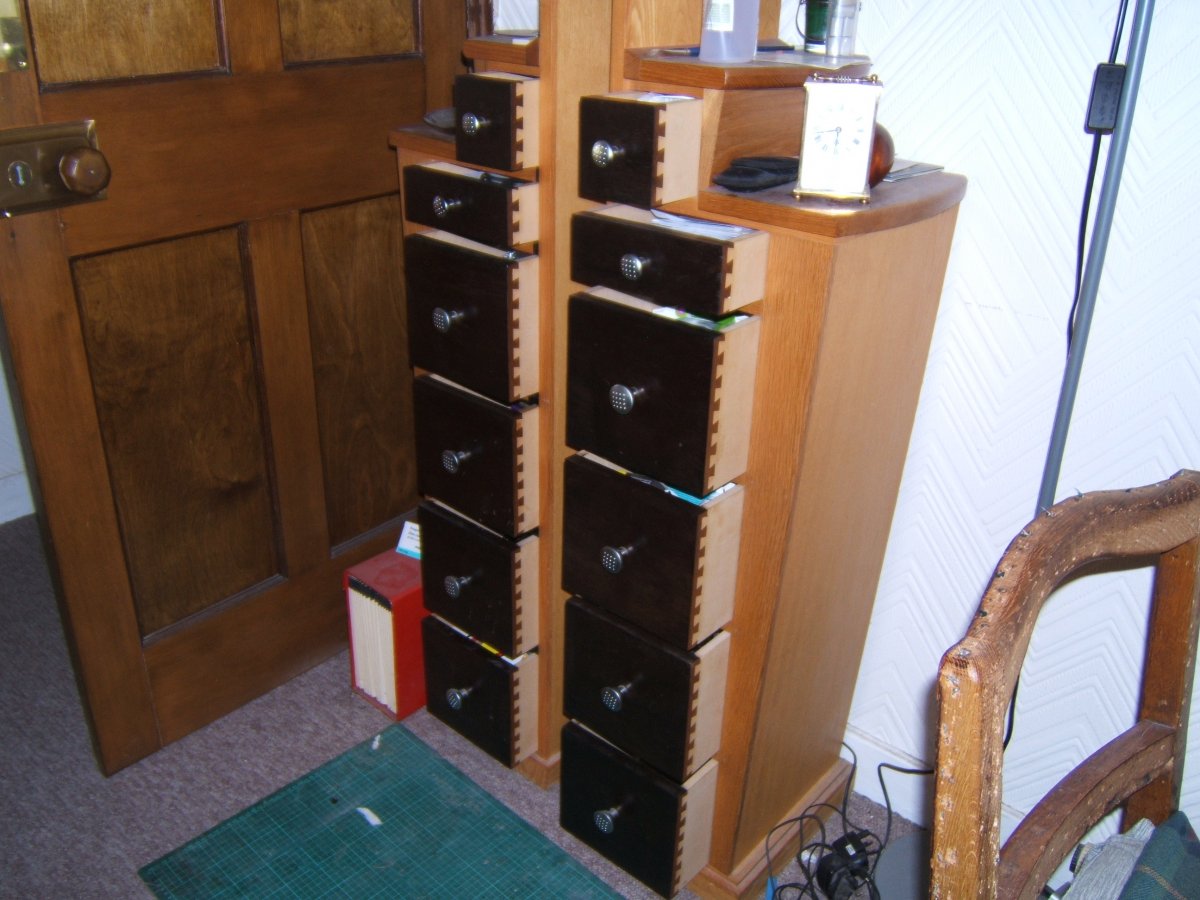 Thanks for all the feedback, keep it coming, it's a good read
P

Those demo joints on the video aren't good at all...

I've got a Leigh jig, which is a lot more flexible, and much pricier to boot, but that allows you to finesse the joints and end up with a completely snug joint. It also allows irregular or asymmetric spacing of the dovetails if you wish, which I use on dovetailed boxes to leave a gap for separation of the lid, and also to make the dovetail in the lid smaller. But then it is double the price...

O
Dovetail jigs - UJK vs Trend vs others?
2