This one moved me up a gear, as it involved dovetails and mitre joints. I haven't done a dovetail since I was in school. It was also my first opportunity to test out one of the mitre jigs on my new shooting board. Also the aim of this jig is to ensure that the two pieces to be dovetailed are marked up at 90 degrees across all 3 axes, so it needed to be pretty accurate. I used up some more of my European walnut stocks on this one as I had one board that would make the main components with little work, and I could take a slice off another for the fence.

Some clever sod somewhere designed this jig with dovetails in, which obviously had to be done without the benefit of a jig! Since getting components to be exactly 90 degrees to each other was the vital element, I suspected that there might well be some gaps along the way.

I've posted pics of this elsewhere so I'll skip quickly through the early stages. Here's a few shots of the dovetails being cut and fitted. That Veritas dovetail saw is insanely good, although I confess I say that with very little to reference it to. 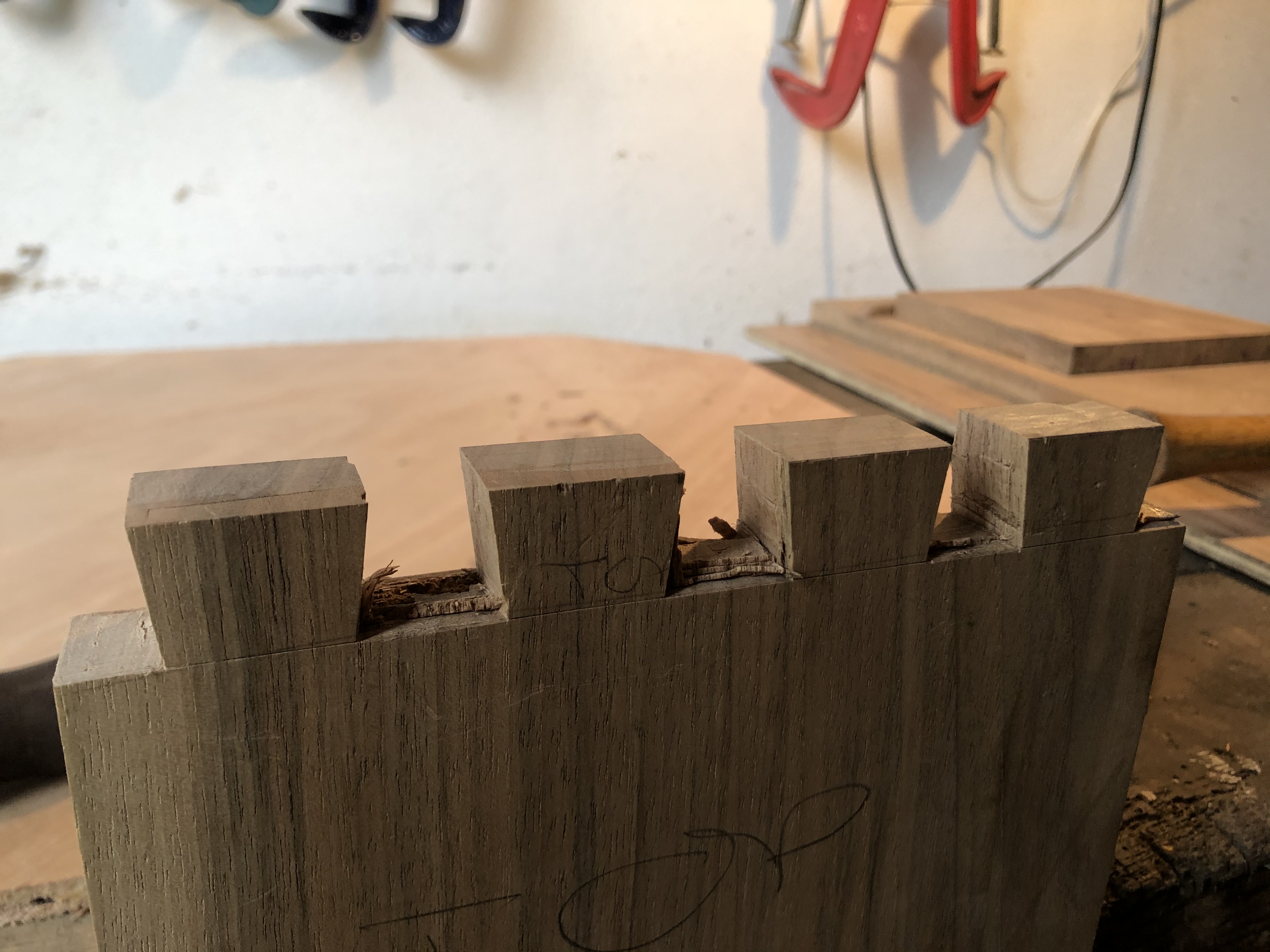 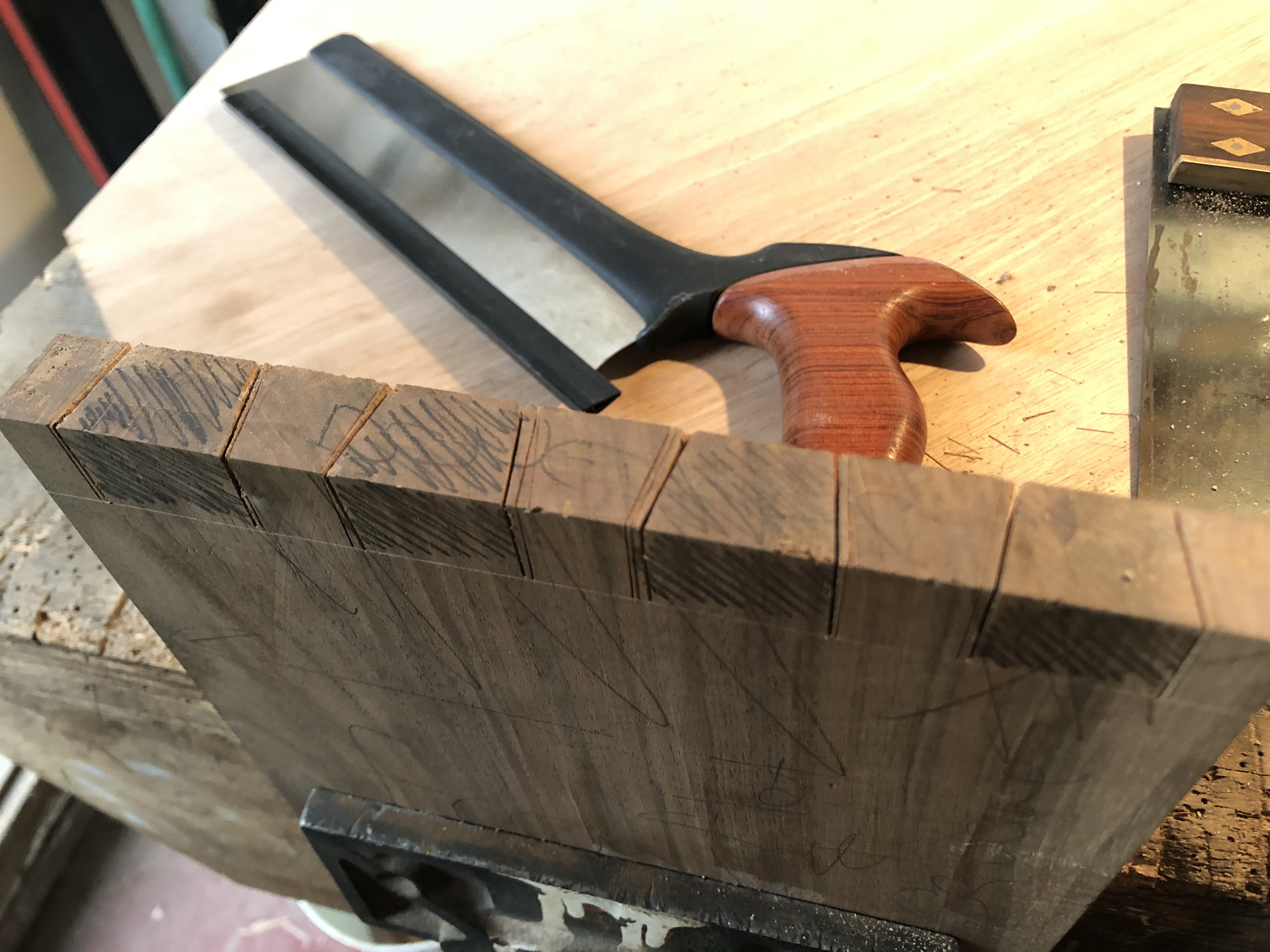 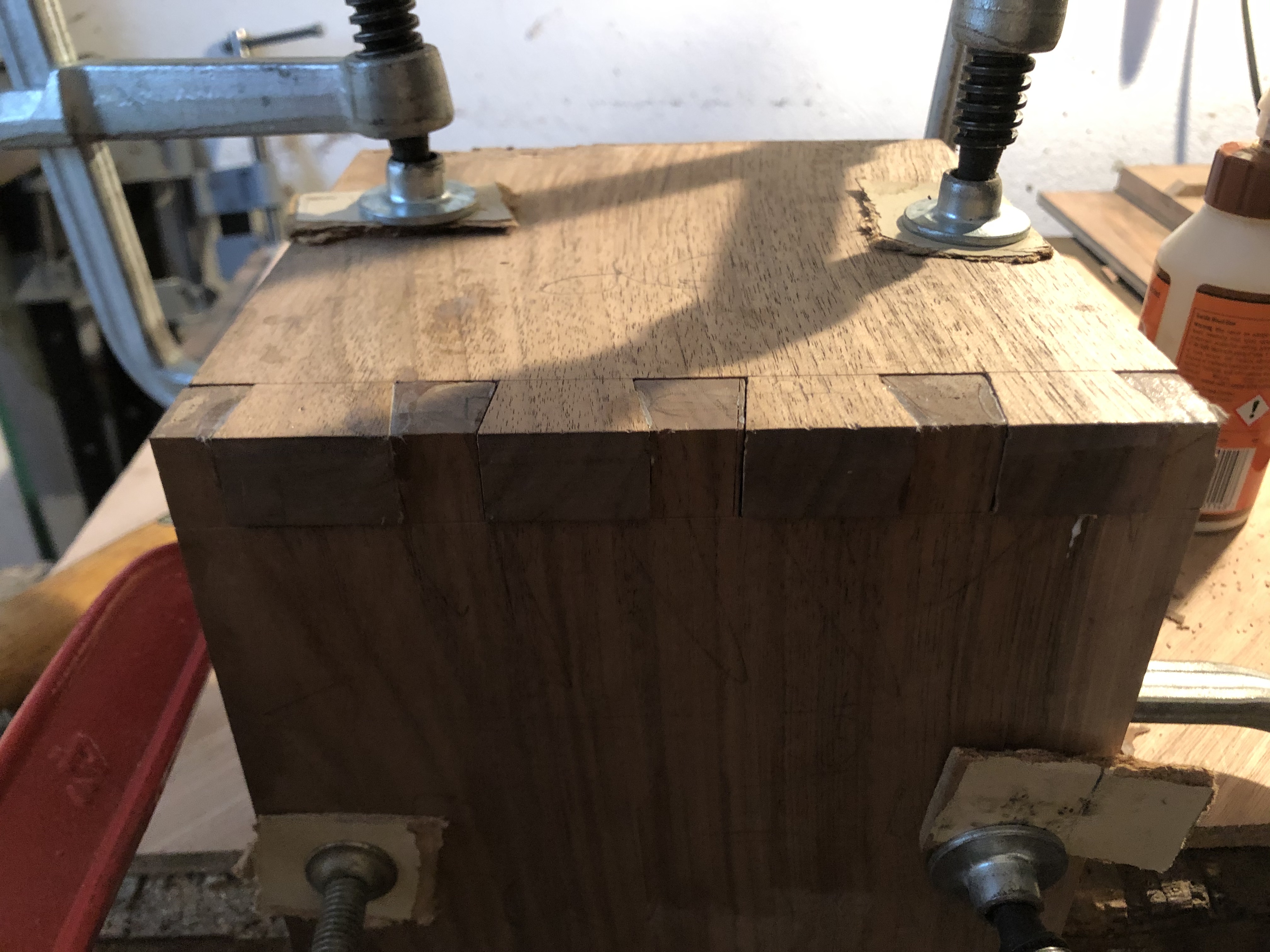 The clamps in the last photo are attached to a plastic 90 degree jig to ensure that the two pieces are glued at the correct angle as opposed to the one that the dovetails would have created, which unsurprisingly wasn't going to be 90 degrees. This means there's some gaps around the dovetails that wouldn't be present had I not been overly bothered about the angles, but so be it. Indeed the same issue arose about the tails and pins sitting flush to each other, but I could plane the finished article to resolve this - obviously without planing so much that the faces were no longer at 90 degrees!

Second stage was to create the fence. It's technically going on the right-hand side since I'm left-handed and prefer to keep that side free, but I could simply flip it so the fence was on the left if need be by making the horizontal face the vertical one.

The fence was cut and planed, and then I marked out the two 45 degree angles, rough cut them and got to work with the shooting board. 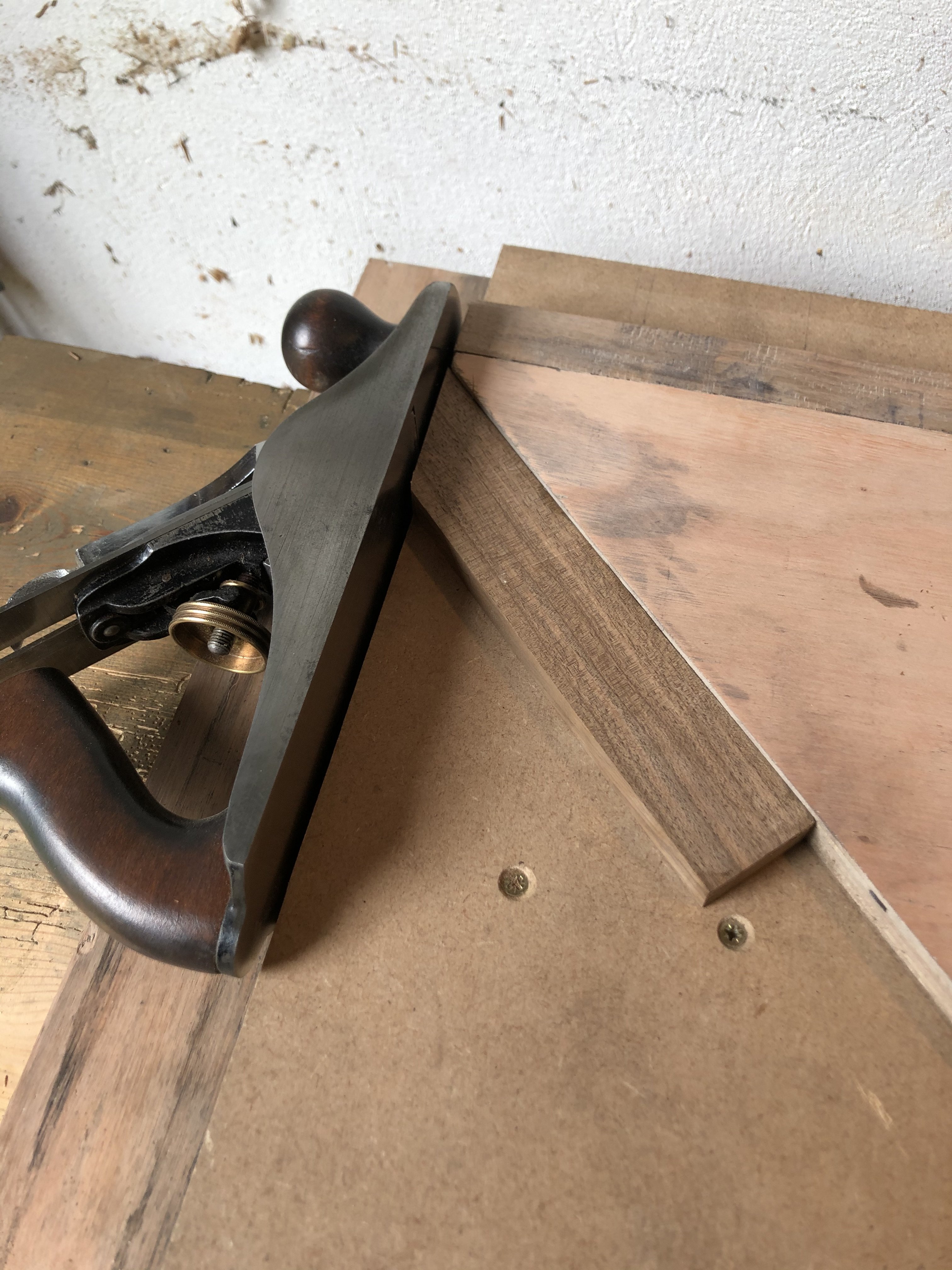 The large gap between plane and board is because there's a lip to stop the blade cutting into the face even when fully extended. The plane leans slightly away, but luckily well within the adjustment parameters of the plane so the blade can be set at a right angle. I use a Stanley No 5. on the board most of the time, but here I'm using a No. 3.

Once both pieces were done, it was the moment of truth. 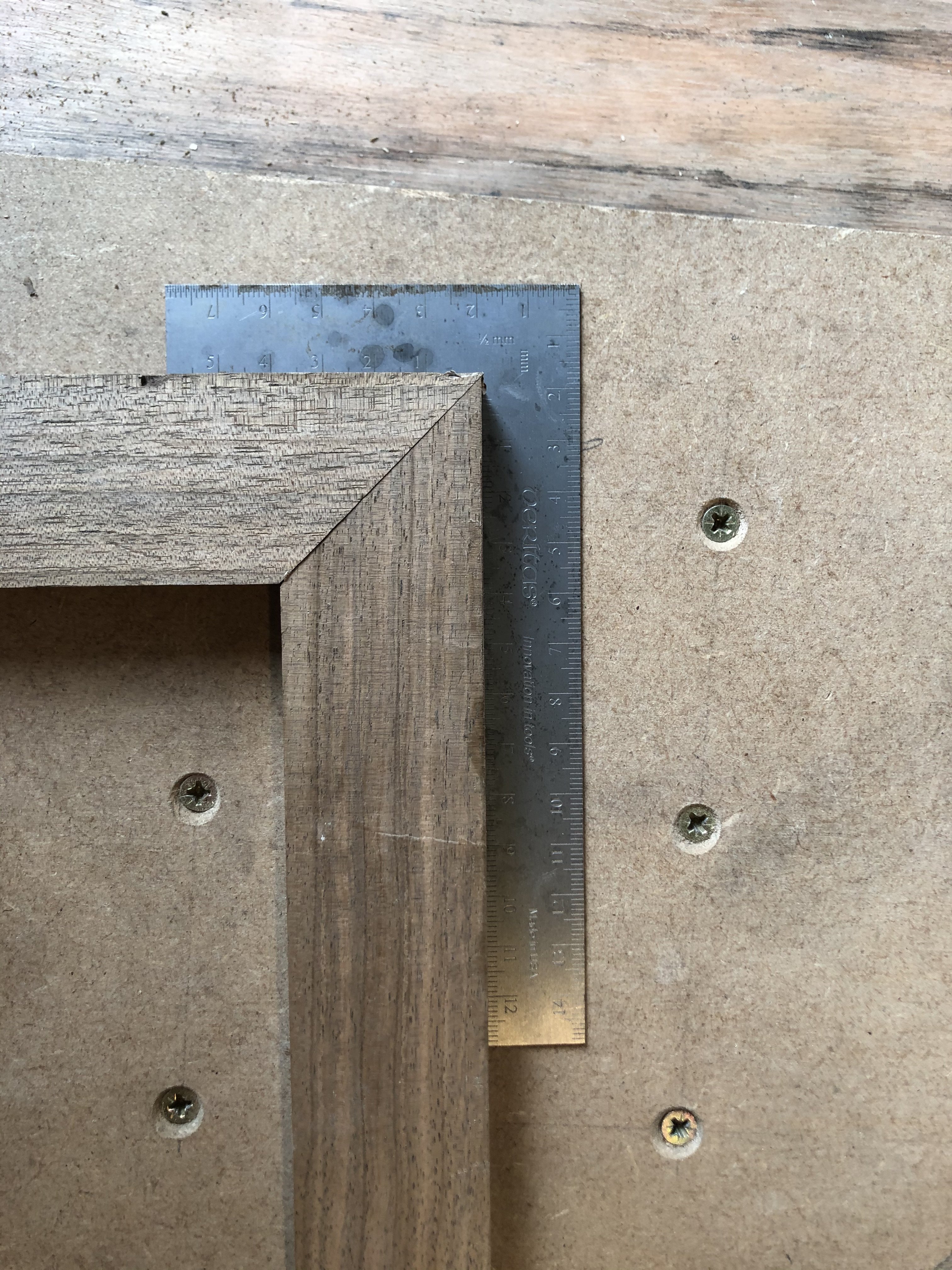 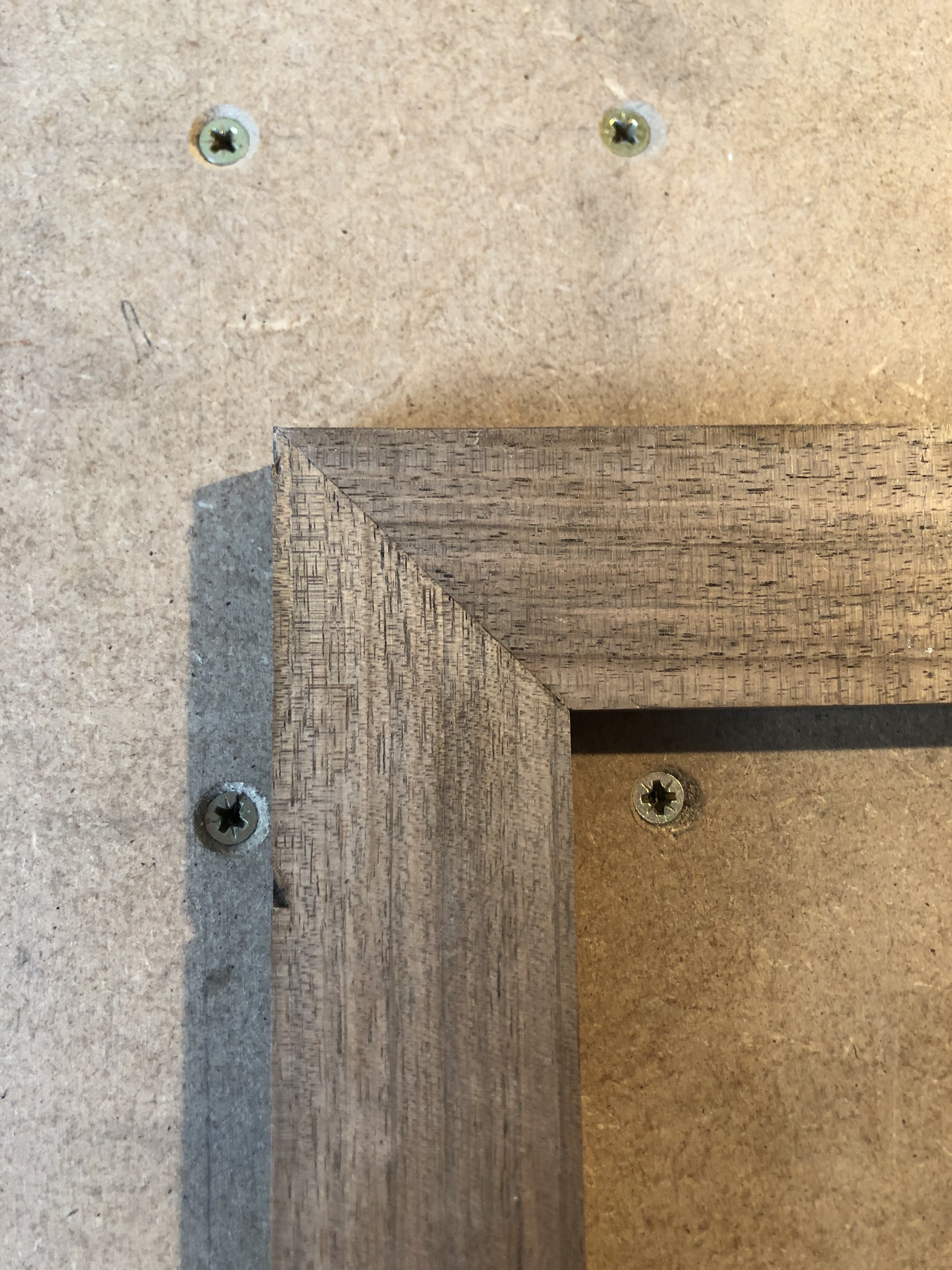 Not bad! Note that what looks like a gap in the first photo is actually partially a gap and partially shadow, as the face wasn't completely flat and there's about a 0.5mm difference. The other side is completely spot on, so that will be the one that goes against the board.

Final job of the day was to glue the fence to the board, making sure the fence is sitting at 90 degree angles. 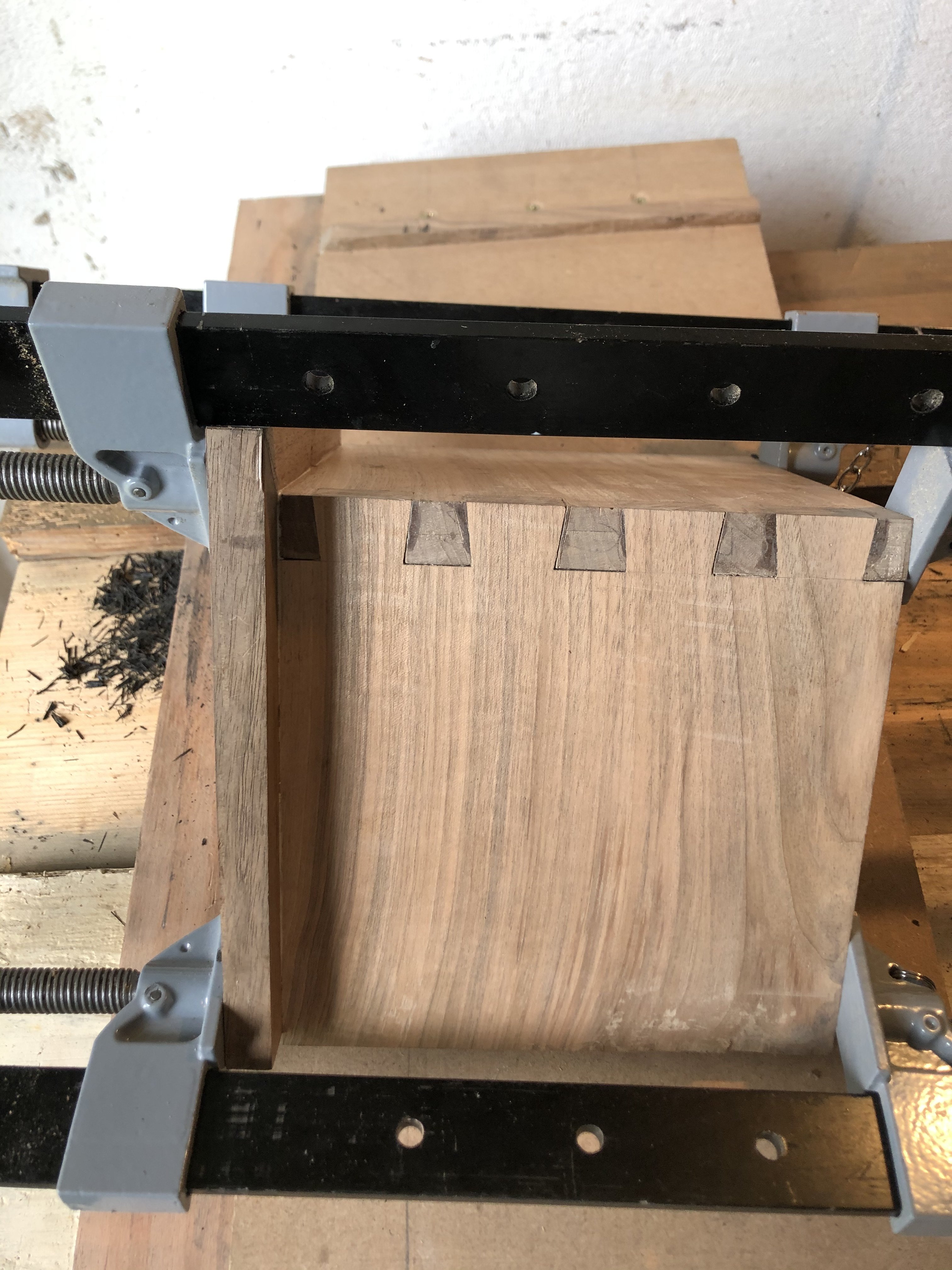 Final jobs will be to tidy up the boards, perhaps trim off the ends of the faces as they're longer than the fences, and triple check all the angles. I'll apply some finish, probably Osmo Polyx again, and then make a test set of dovetails. Obviously the jig won't help with my sawing and chiselling skills, but at least I can't blame alignment!

So this is in place of using a mallet or plane to support the free end of the tail board as you mark up to cut the pins?

How does it stay in place, particularly if the boards you are using are thinner than the edge-guide/ batten thingies? And half the cuts in a box or drawer are referenced to the left hand edge, and half to the right. Then after marking you have to remove the board from the jig to be able to cut it. These are all extra processes, so there'll be a lot of chopping and changing.

MikeG. said:
So this is in place of using a mallet or plane to support the free end of the tail board as you mark up to cut the pins?
Click to expand...

Essentially yes, the pin board is placed against the fence and clamped in, preferably in a vice, so it's held firm whilst being marked from the tail board. The benefit is that if the tail board is moved for whatever reason, it's easy to get it back into place because it needs to sit flush with the fence.

As for the fence, yeah I suspect it might be a case of testing it out and perhaps planing it lower, which shouldn't affect accuracy for thicker pieces.

It can't be any worse than trying to manually hold two pieces of wood at the correct angles!

So - here is the finished article. Relatively pleased with a first dovetail attempt (post-secondary school) and the fact that along all X/Y/Z combinations the angles are as near to 90 degrees as I could possibly get using what I had available.

Positives: - accuracy, good practice, proved my mitre jig is good, got rid of some more of that walnut.

Negatives: - planing skills still need much work so there's a lot of tear out, had to use quite a bit of filler (ahem).

Lessons learned: - end grain is my absolute nemesis, I am going to spend a lot of time on practising getting it flat with no tear-out and splitting. I did sharpen my 60 1/2 but the chatter was horrendous so I need to take time to revisit setting it up properly (actually today I just bought a Veritas low angle block plane). I must up my sharpening game, I don't think I'm taking enough care over getting blades properly done, probably because it requires patience and an attention span, which I struggle with sometimes. 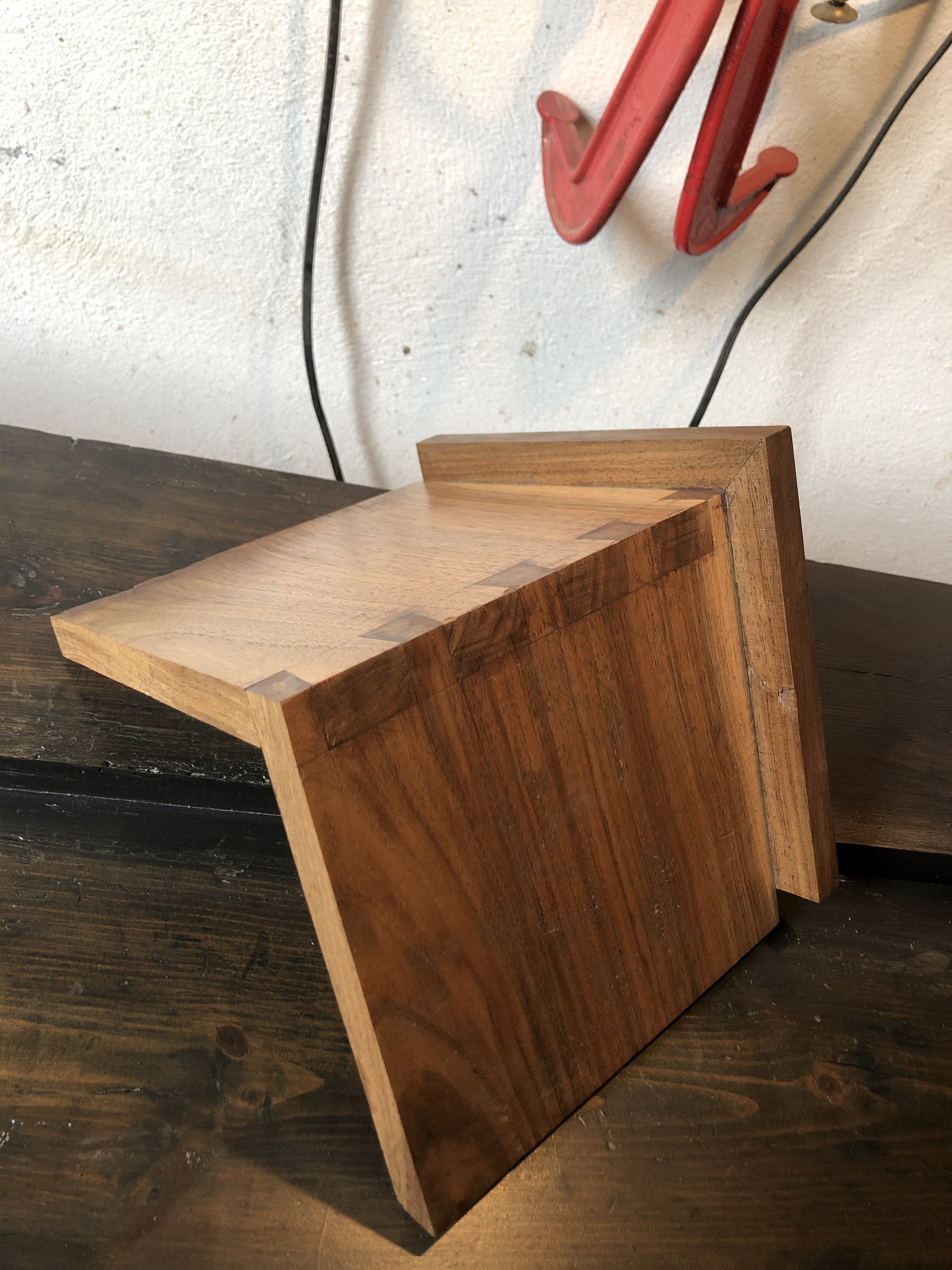 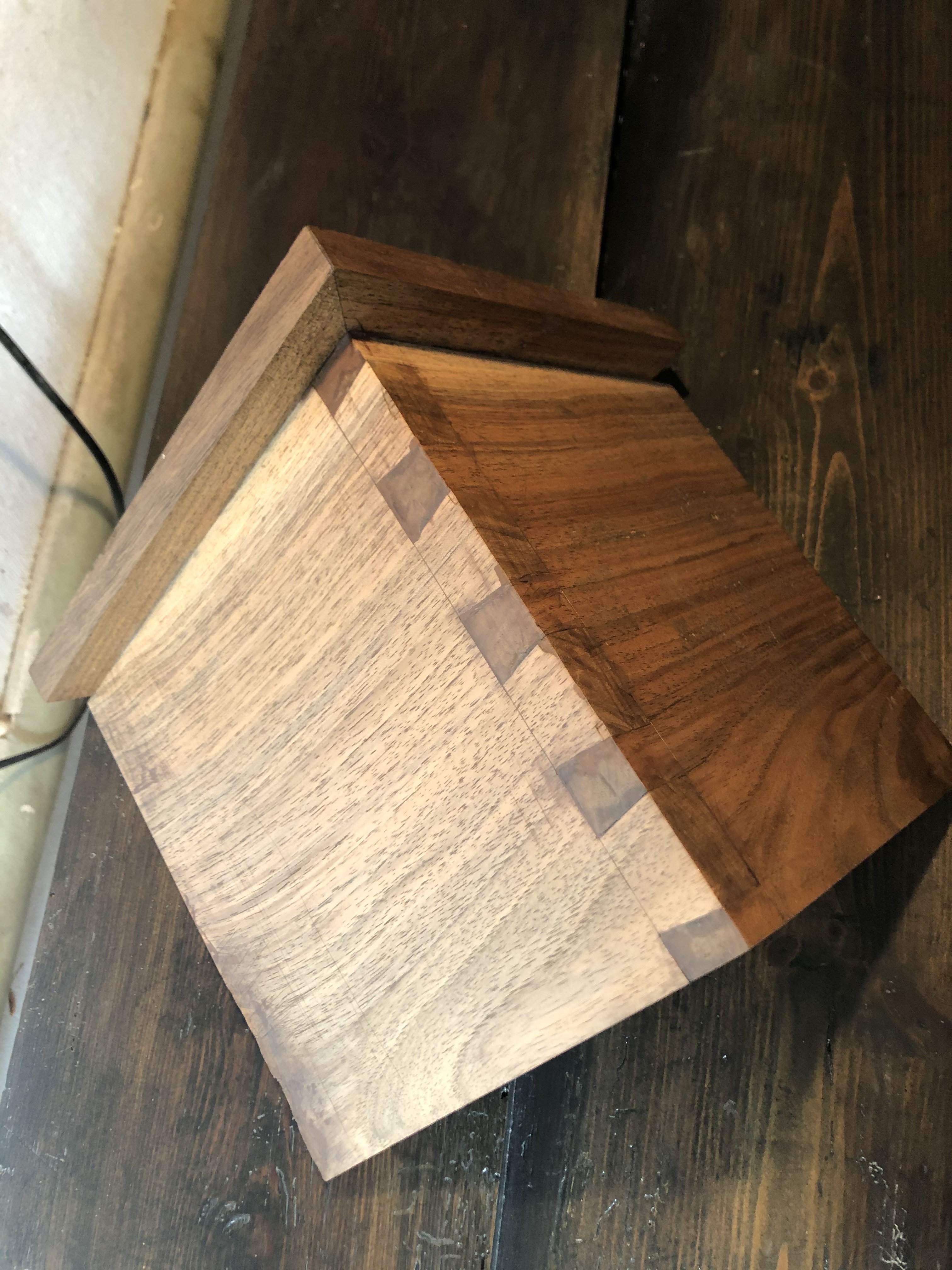 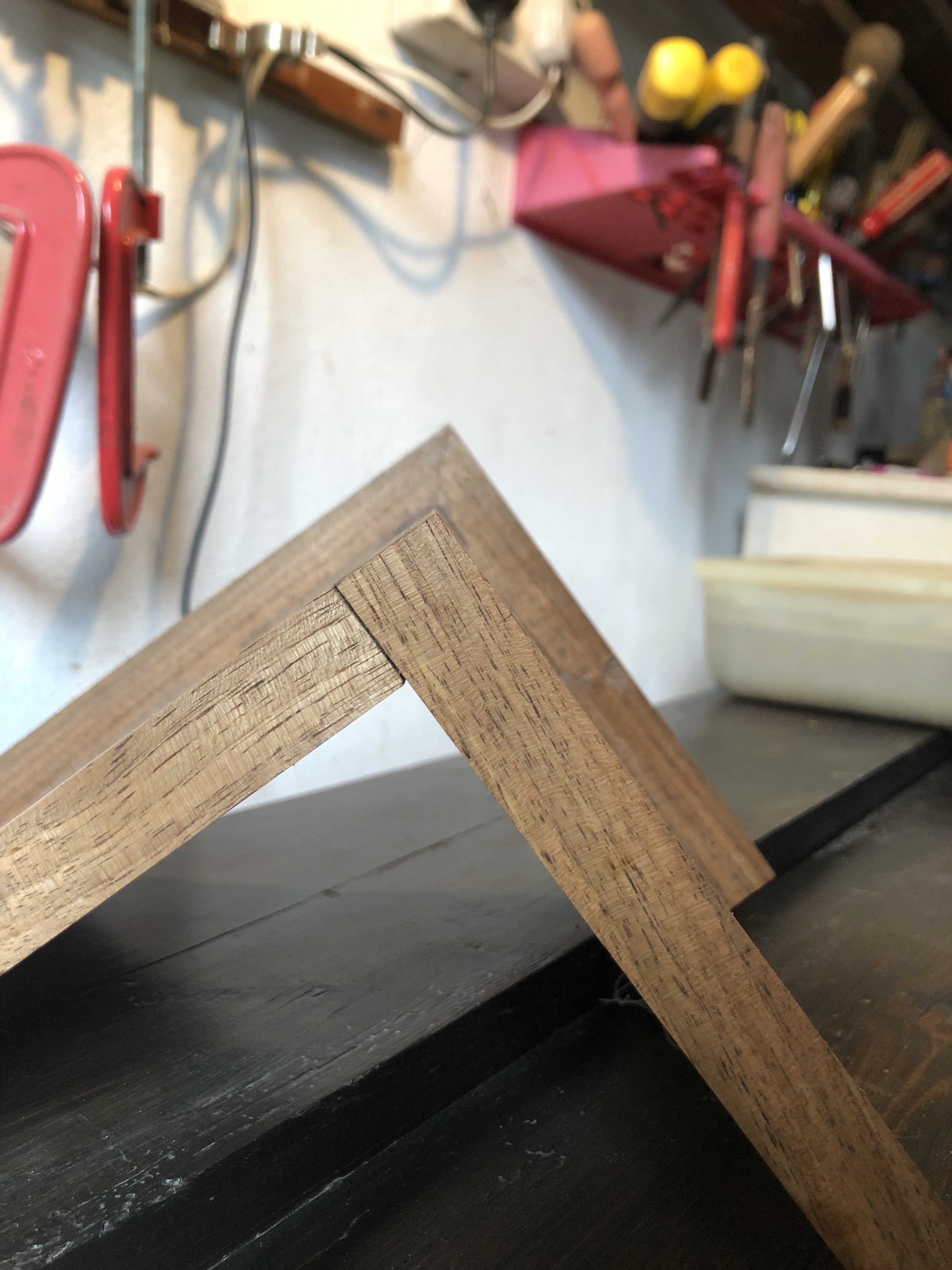 billw said:
......It can't be any worse than trying to manually hold two pieces of wood at the correct angles!
Click to expand...

Well, that's not what you do. You set the pin board carefully in place level in the vice, at the same height as a plane on its side (traditionally) or your mallet (my preference, because you have a mallet on the bench anyway when making dovetails, and not a plane). The tail board then sits in place perfectly safely for marking, with the pressure of one finger being all that's needed. I can see your jig helping, but I can also see it being a pain. Let us know how you get on with it.
C

For a first attempt at dovetailing that is extremely impressive!

Whats even more impressive is for someone so new to woodworking to dig deep and find the courage to even have a go at dovetailing.

When I exhibit my furniture at shows I get to speak to plenty of hobby woodworkers, they often regard dovetails as some horrifically difficult joint. And, despite woodworking for several years, many of them have convinced themselves that dovetailing is not something they dare tackle.

That's so sad, if only because a dovetail joint is unique in that it can still be super strong even if it's a bit gappy, so there's actually no reason not to just roll up your sleeves and have a go.

Anyhow, once again, congratulations on an excellent effort!