Chewing the cud with an old friend in his barn I noticed an old Stanley 748 pushed into the space behind a cross brace. "Oh that's a lovely old thing" I said, and he instantly said "it's yours". I offered to just do it up for him and give it back, but he wouldn't have it, so I am now the new owner of an old shoulder drill (there's probably a more official term than that). It needs stripping and rebuilding, but everything seems to be there and sort-of working.

It seems you can't give them away on Ebay. It won't be the most used tool in my workshop, but there'll be a time when nothing else will quite do. I might even do a restoration WIP. Anyone here use one?

according to t'internet its a BREAST drill.
Although that may come out different if the sites modesty programme takes exception.

I was an apprentice in the 60's, before power tools were invented ( :shock: ) but although using a hand drill and a brace, never saw one anywhere. :roll:
L

I have one of those in the shed, somewhere.

I've just looked at what I've got to do today, and it isn't much. I might have time to take it apart and clean it up this afternoon. Stand by for a Wallace-like restoration.......(there seem to be no ironic emoticons)..

I still have a breast drill (not the one with the gearbox) and use it occasionally. Surprisingly, they are useful for very small bits - because of the gearing they don't snatch like egg beaters.

In a cupboard at work I think there are at least two, maybe three of these in clean condition. Probably because they have been rarely used !
M

I've used one long ago. They are actually quite practical, as they give a lot more stability to the positioning of the drill, while allowing one to turn the handle; nearly a third hand. The limitation is that you have to get your chest into the right position!

Ah yes, that is the problem I had when I tried one, great for horizontal holes at chest height, but ...

But then there's the side handle on an egg beater. You get an extra handle so you can hold on to both for greater stability while you crank it ... with your nose ? I guess it is no coincidence the side handle of my Footprint eggbeater is in pristine condition.
S

Brest drills are great when your NiCad's droop, the charger is asthmatic, and you need a job done yesterday, certainly in the next 10mins. Trouble is, they have a unique muscle/stance demand, and,unless you develop it with regular/daily use, a prolonged set of holes, will, I assure you, you will have fun lifting a loaded pasta spoon next day...I had occasion to finish prepping for a first fix electrics using one with a 1" bit (2.5mm ring main) and I paid for it.

The Great Restoration (eat your heart out, Wallace . 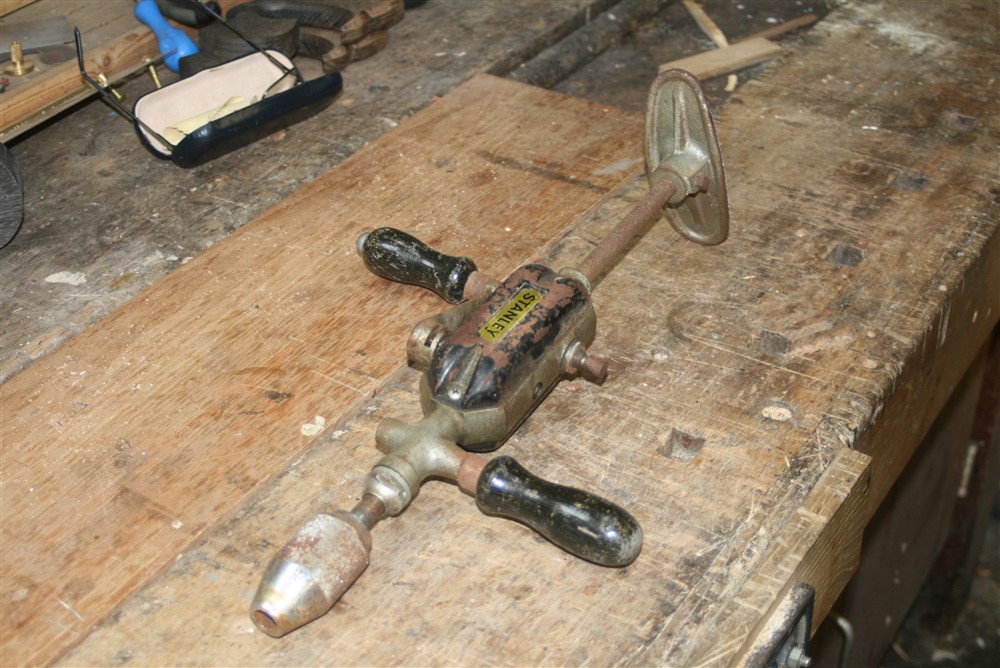 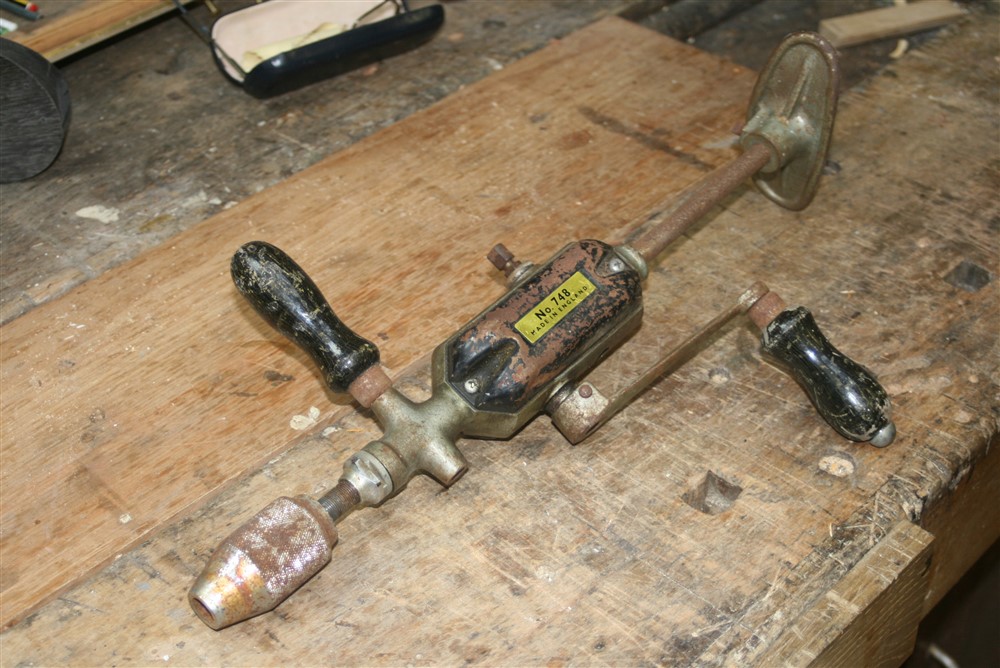 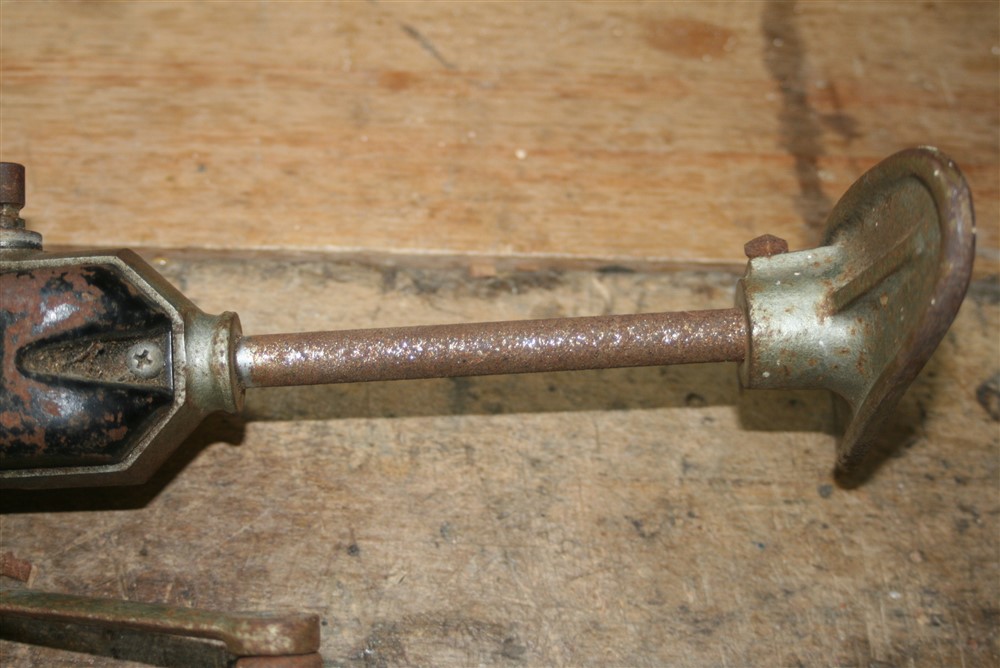 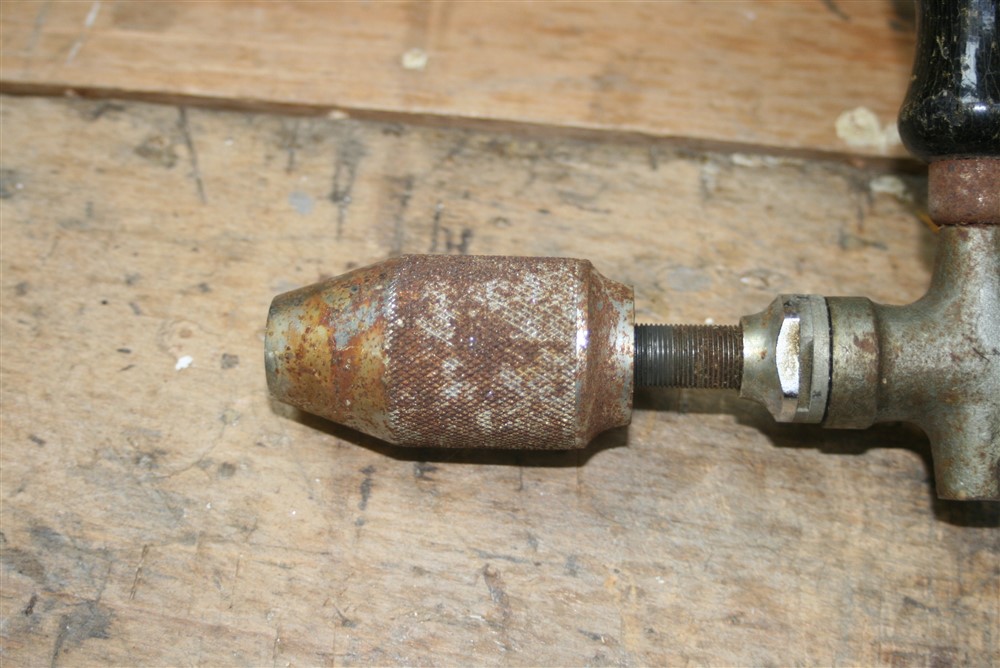 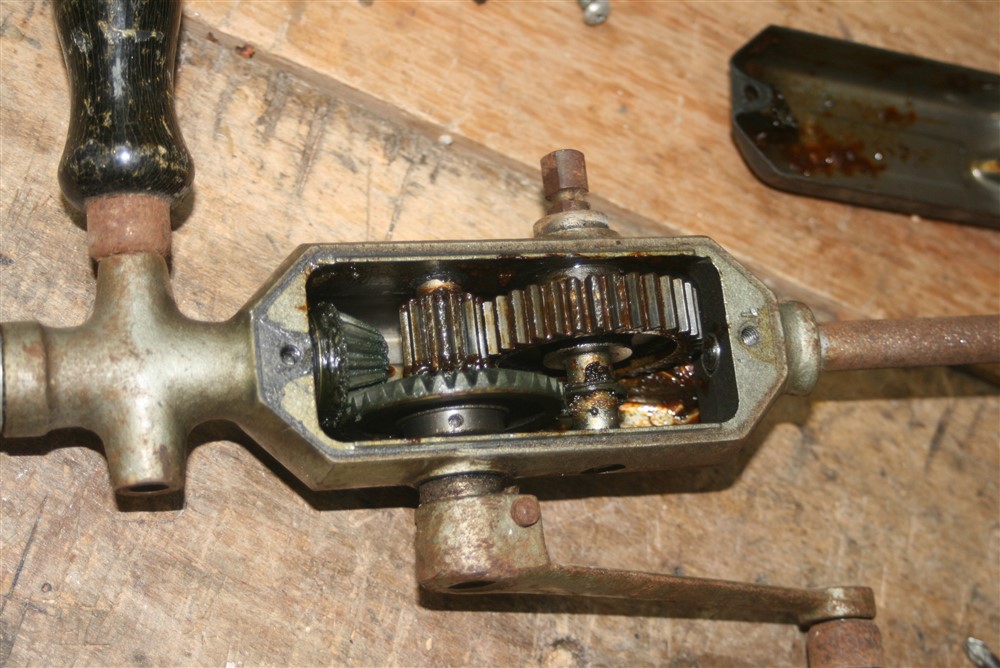 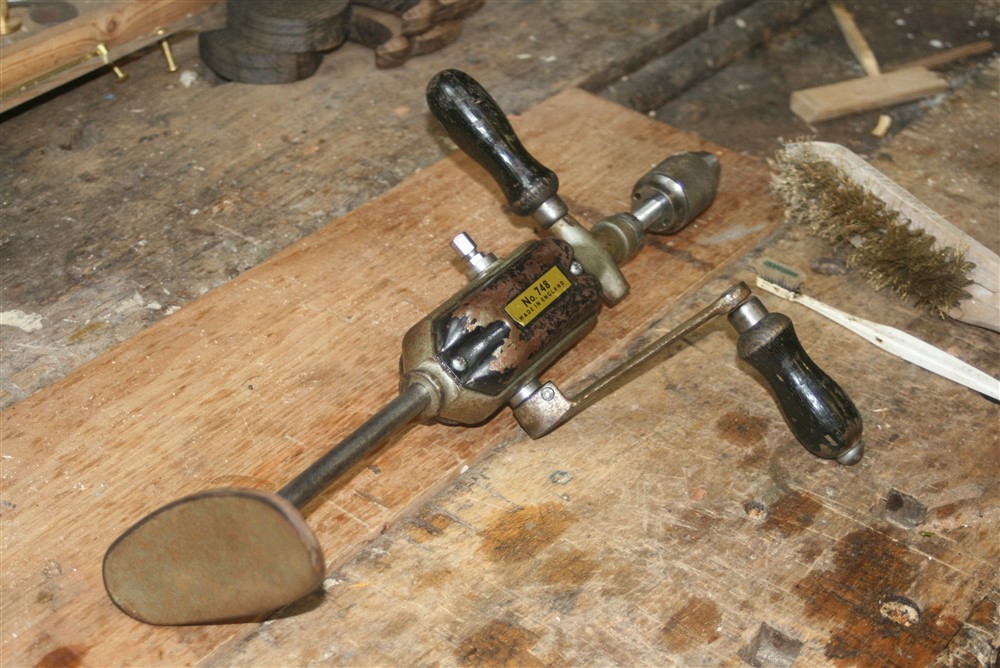 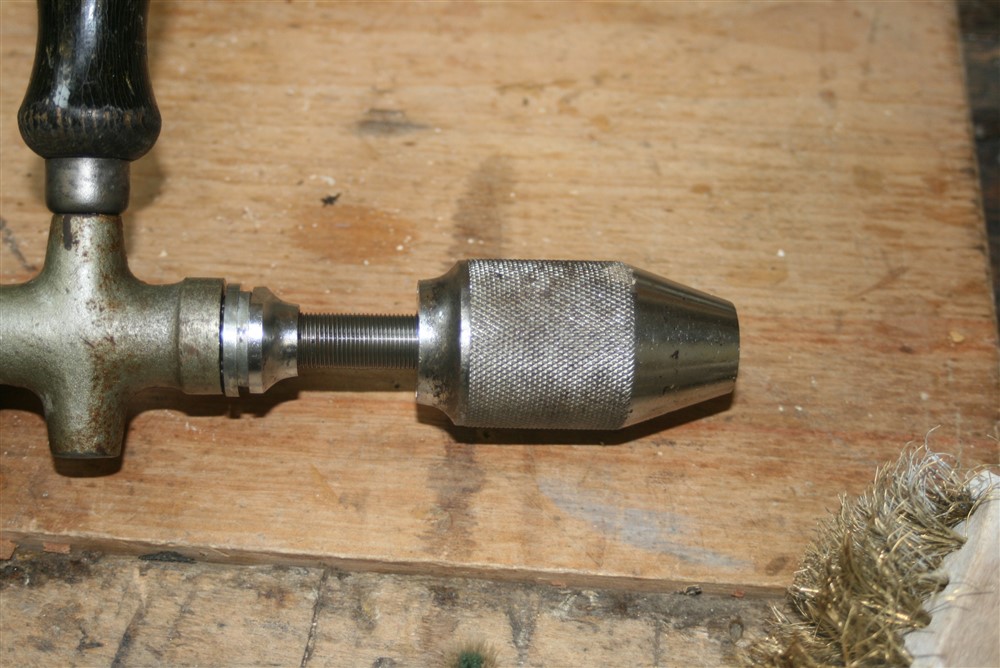 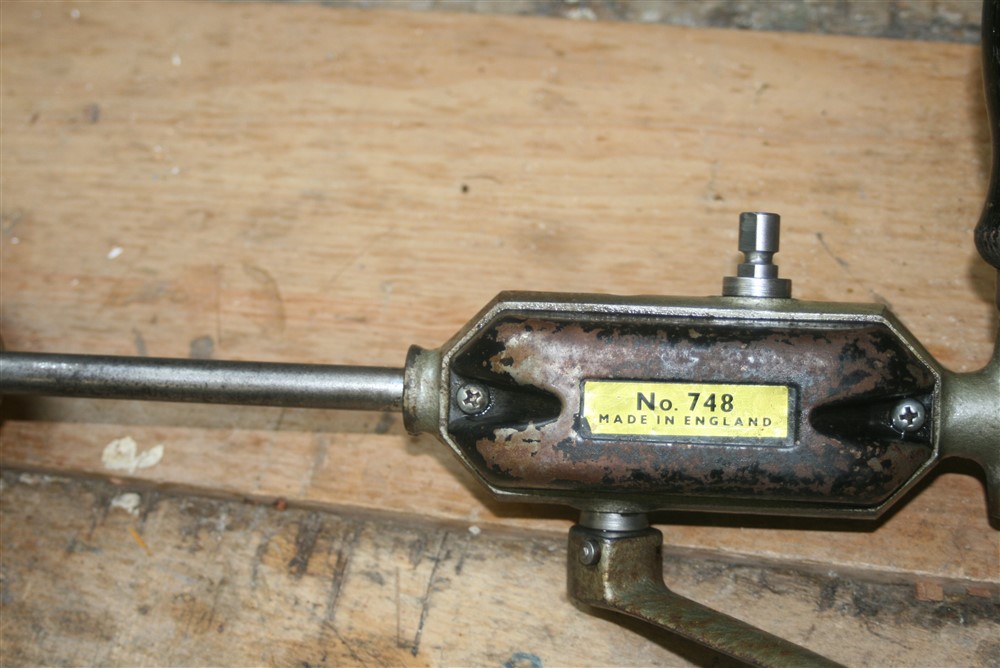 An hour's gentle work with white spirit, toothbrush, brass wire brush, white spirit, WD40, and 3-in-1 oil. The main thing is that the mechanism has freed up nicely, and the chuck now works. It was seized. Nothing is shiny now that wasn't shiny when it was made. I've not touched the woodwork.

Now my big issue is re-arranging stuff in my tool cabinet to accommodate it.

Strange one breast drills, I've got a few and there were so many makers and types it's not easy to come across 2 the same. Some can be minters but others are make do and mended by workers who had nothing else.
The ultimate is a North Brothers full and partial forward reverse ratchet drive model with hollow handle 8)
Cheers Andy

As someone with more than one bread and cheese powered drill, I'd say that was a sensible level of restoration, getting the drill back working properly, without tarting it up.
W

Is a hand drill of much value for woodworkers these days? Are there situations where they'd be better over an electric drill? At a guess, perhaps accuracy and subtlety? My Dewalt drill spins at a million miles an hour and there seems to be no way to go a bit less full guns with it.

Actually surprised there isn't a boutique hand drill on Axminster for a couple of hundred quid. They seem to only have two mediocre Stanley drills. What happened to Stanley? They used to be reknowned for quality tools.

My dad had one of those when I was an apprentice to him, being geared it was in regular use & much preferred to the standard hand drill particularly on site in the day’s before sites had generators & cordless tool weren’t invented. :shock:
E

MusicMan":1r4ccktu said:
The limitation is that you have to get your chest into the right position!
Click to expand...

Or belly, top of thigh adjacent to the crotch or the hollow of the shoulder. Seen old hands do all of those.

You can also just cup your hand over the rest, using it sort of like a saddle; makes it much easier bear down hard than with a standard eggbeater but not all breast drills really allow for this posture as their scales varied hugely.


SammyQ":1r4ccktu said:
I had occasion to finish prepping for a first fix electrics using one with a 1" bit (2.5mm ring main) and I paid for it.
Click to expand...

To be fair though wasn't that more of a job for a brace and a sharp auger? Not that these are untiring to use it must be said.


AndyT":1r4ccktu said:
As someone with more than one bread and cheese powered drill, I'd say that was a sensible level of restoration, getting the drill back working properly, without tarting it up.
Click to expand...

But 'e's only just started! Er, sorry, I'm in a middle of a type 15 overhaul and I think I still have two coats of paint to go before I can call it done

Seriously though Mike, great to get the old girl back up and running. The internals tend to always be good on an enclosed drill, plenty of grease in there to protect against rust and wear which is a great aspect of the design. But as with all drills with this type of chuck they're the weak point and it's the luck of the draw what you're faced with. They can look good externally and be bad inside or can look like complete write-offs and be greasy inside where it counts, still with intact springs after 50+ years.
E

welly":3l5z3nxy said:
Is a hand drill of much value for woodworkers these days?
Click to expand...

Used appropriately, within their limitations, they're very usable still as some of the posts above already cover.

One of the classic arguments in their favour is that you never need to worry if there's a power point nearby, or about a battery having enough charge. Plus they're essentially silent in operation which has obvious advantages for certain users or in specific situations.

I think they're worth anyone trying at least, even those who aren't particularly focussed on hand tools, see if you get on with them or not. I talked to someone last year and we were largely on the same page about hand tools but was surprised to hear he considered them an absolute waste of time. Perhaps he'd never used a good one, or was trying to use them outside of their comfort zone. I drill 99% of holes with various hand drills (not because I'm a Luddite, I have two power drills, four if you count mini drills).

If you go after a basic 'egg beater' it helps to get one that was a good un when it was new and hasn't seen lots and lots of use. Although they can work okay (actually quite well) with play in the mechanism – either from new, or through wear – once you try one that has tighter tolerances, and is oiled and greased just the right amount you wouldn't want to go back.

Braces are an easier buy as most that aren't a solid lump of brown will be just fine in operation, sometimes even before some oil has been worked through the ratchet they'll still work (albeit a little squeakily). Non-ratcheting braces are even more bulletproof, can be cheap as dirt, but are less versatile.


welly":3l5z3nxy said:
Are there situations where they'd be better over an electric drill?
Click to expand...

Well braces are said to have unlimited torque, and there are most definitely holes you can drill with a brace (along with the right bit) that a cheap or mid-range cordless couldn't touch. Think a series of 3/4" dog holes through 70mm of old oak. Plenty of battery drills couldn't even complete the first hole.


welly":3l5z3nxy said:
At a guess, perhaps accuracy and subtlety?
Click to expand...

Finesse yes. Although somewhat surprisingly accuracy can be better drilling small holes using power, but ideally you do need to be able to control the speed on the fly.


welly":3l5z3nxy said:
Actually surprised there isn't a boutique hand drill on Axminster for a couple of hundred quid.
Click to expand...

Look up Bridge City Tools. Not just their own site, look for listings on eBay and elsewhere to see what they can fetch on the secondhand market :shock:


welly":3l5z3nxy said:
What happened to Stanley? They used to be reknowned for quality tools.
Click to expand...

To be fair to them the world changed around them, but bottom line is the beancounters took over. They've been bought and sold a number of times in recent decades and until very recently many considered that they were merely trading off their historical good name (which to a great extent is still true, even with some new higher-end tools on their books).

welly":ramws8j1 said:
Actually surprised there isn't a boutique hand drill on Axminster for a couple of hundred quid. They seem to only have two mediocre Stanley drills.
Click to expand...

Realistically, electric drills are generally much more practical, even for those of us who like a choice.

But anyone wanting something a lot like Mike's could try here:

- scroll right down for the Schroeder.

They also do a range of braces, with optional extra shiny brass parts.

For smaller stuff, Wictor Kuz has cornered the market at the opposite end of the restoration spectrum, with drills that look like they just left the factory.

I have three hand drills, located in different sheds. I leave one set up with a small drill for common screw pilot holes. I find the lighter weight makes it easier to position accurately, and small holes are very easy to drill. I don't usually use them for holes greater than about 3 - 4 mm, unless for some reason they need to go slowly.

I normally use hand drills when drilling screw holes into the walls of woodwind instruments, for e.g. thumbrest seatings. It's obviously important not to drill through into the bore! One can stop a hand drill far faster then a power drill. In fact I often use just a pin chuck spun in the fingers.

As for the brace and bit, these are used for big holes, and also, with an expanding bit, for holes that need to be an exact size. For example in making a drilling jig to fit exactly over the round end of an antique chair leg that I was restoring.