I showed a photo on another thread of this table, which I make fairly frequently, 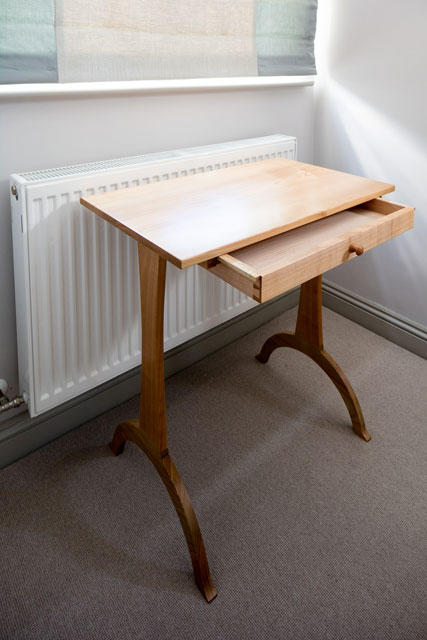 It's a copy of a piece made in the Harvard Shaker Settlement, it was probably originally intended as a sewing table. There's a measured drawing in John G Shea's book "Making Authentic Shaker Furniture"

I had a few questions about it, rather than disrupt the other thread I'll try and answer them here.

Many Shaker pieces are a curious and charming combination of elegance and crudeness, and this is no exception! The legs (which I've heard variously described as "hayrake", "stirrup", or "boot pull") lend a real lightness to the table, but the drawer arrangement really is very basic. I've made about fifteen or twenty of these, and the design has evolved over time. I now fit a little sprung wooden clip to the drawer to prevent it being pulled right out (it's deceptive as the drawer is only half the depth of the top) and I also now put a central muntin in the drawer. The one in the photo was the first prototype made from cheaper English Cherry (as is normally the case amongst custom furniture makers, this is the version that ends up in my house!), but I normally make commercial versions in highly figured Curly or Fiddleback Cherry, so imagine it constructed from boards like this, 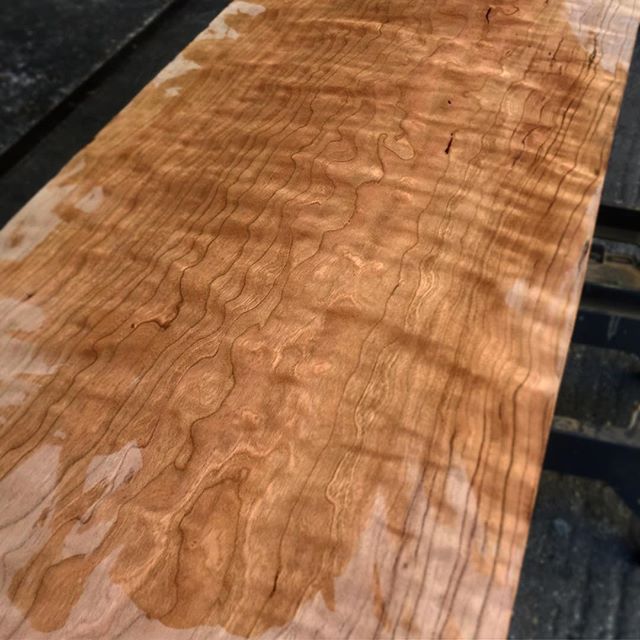 The view from underneath gives most of the construction details, 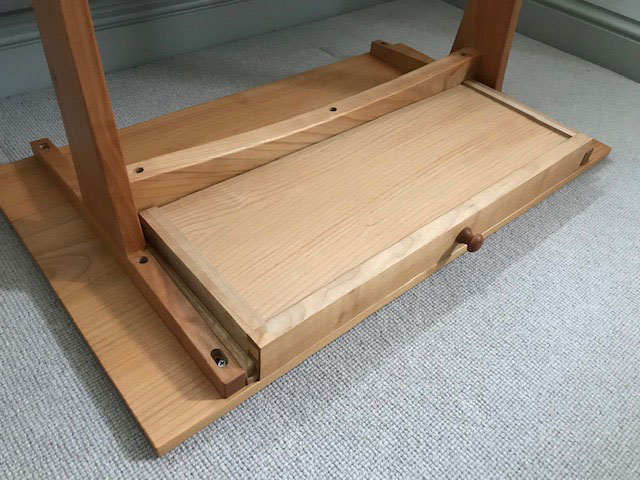 The cross member is quite a hefty piece of timber as that's what mainly resists racking. As you can see, the top supports are secured by slotted screws on the outboard end to allow for seasonal movement. And the drawer runner really is a simple (verging on the crude) arrangement. But that's true to the original and it works well enough.

When I make one I usually batch out a second at the same time, and I aim to complete two (from beginning to end, including finishing) inside one week. The key to efficiency is this jig which I use to copy rout the legs, consequently four legs can be made (ie from rough cut boards to fully finished components) in well under a day. 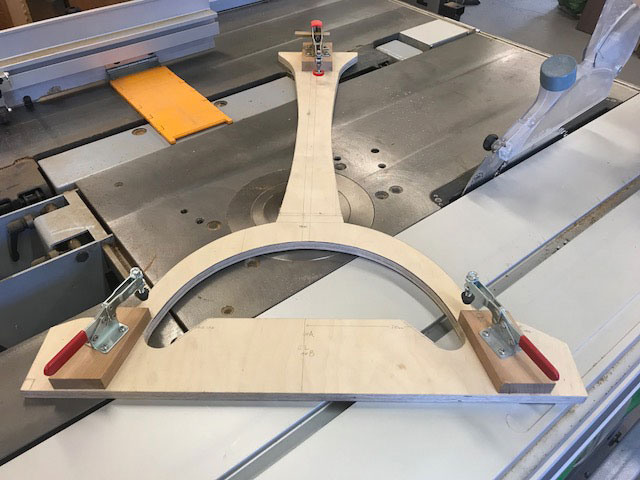 Hope that answers everything, any more questions please ask.

It's the short grain in the legs/ feet which make me a bit worried. It looks as though if you were to lean your elbows on it you'd end up face-first on top of the wreckage of it on the floor!
F

With stirrup bit of the leg is that with 2 or 3 sections of wood joined together and then shaped? If so how do you joint them together? and I really like the lines of the table too

Now that is actually shaker style.

foxbat said:
With stirrup bit of the leg is that with 2 or 3 sections of wood joined together and then shaped? If so how do you joint them together?
Click to expand...

Each leg is comprised of two sections. First is the foot "stirrup" piece, where the grain either runs horizontal or, better still, you search for a curved grain board to minimise short grain. Next is the upright, where the grain runs vertically. The two pieces are morticed and tenoned together, but as I'm chasing to make two in a week I normally pop in a big XL Domino! This is how the original Shaker piece was made (well, apart from the Domino that is!), but you could further minimise short grain by forming the "stirrup" from two pieces which were M&T'd together, and then have the upright M&T'd into that. It's fairly normal in chair construction to have three components jointed together in one location, so there's no question but that this could be done securely.
C

MikeG. said:
It's the short grain in the legs/ feet which make me a bit worried.
Click to expand...

It had me worried too, in fact I always joke to clients that this piece is unsuited to households with small boys or large dogs!

However, there are plenty of Shaker originals that have survived now for well over a century. I also take comfort from the handle on my wooden jack plane, 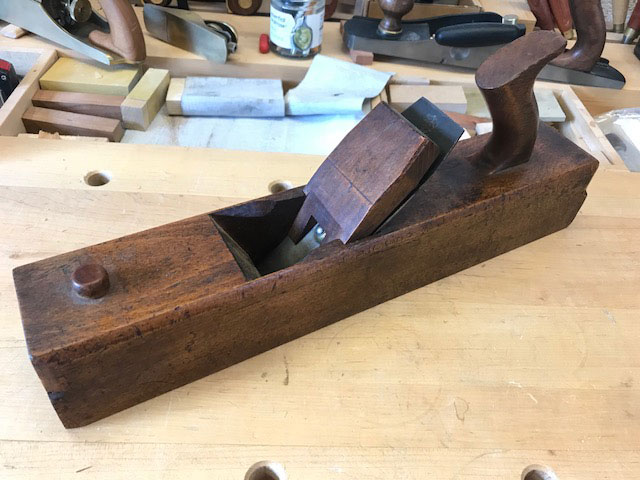 I use this plane regularly to flatten slab table tops that are too wide to pass through my planer/thickneser. And even though the handle is short grain, and I put my full weight into the job, the tool has given me about forty years service, plus it's probably done similar duty for several craftsmen before me!
A

how tall are the curved feet at the highest point and would I be right in thinking that the total height is about 2' 6"?

Are the legs laminated? I'd be concerned about runout.

Very nice Custard, that was my initial first thought as well about the shortgrain, but I suppose you would have to hit it really hard to break it. Then I remembered a piece that I made years ago not quite such short grain, but it’s stood the test of time (25years). 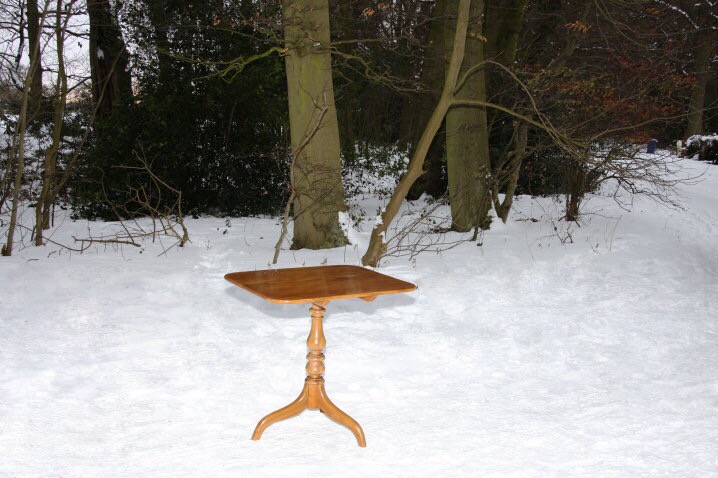 It's done really well if it's been left out in the snow for 25 years. What finish did you use?
C

Ha ha, French polish in those days, it didn’t sit there for long I can assure you.
I had all my dad’s old 1950s woodworker annuals and spent ages going through them all to find all the bits on French polishing, and in those days it was a lot. Then a lot of practice!

Andy Kev. said:
how tall are the curved feet at the highest point and would I be right in thinking that the total height is about 2' 6"?
Click to expand...

Hello Andy, the total height is 27", which includes a 1/2" thick top. This is exactly the same as the original. It's a little low for a work table, but you can just get your knees under it as long as your chair isn't too tall. I'd be concerned about making it taller as then the racking forces would increase. Most clients seem to use it as a sofa table, hall table, or side table rather than as a desk, so it's not a problem being on the short side.

The curved feet are aproximately 7" tall to the top of the curved section, there's another inch on top which is straight sided and mates with the uprights.
F

This is really helpful, I do love that table. Thank you. And inspired by both Adrian and Custard I have also sent off for a copy of the same book!
A

thanks for the details. I reckon it’s too elegant to be considered as a work table but it would look perfect in a hallway.