Any one have plans or directions for a VERY SIMPLE secret box?

I have been backed into a corner by my 7 year old granddaughter to make her one. :roll:

I'm not talking japanese puzzle boxes that need 42 different movements to open the dam thing. I just want a concealed opening box mechanism of some description that will amuse her to think she can keep stuff from her brother.

I made this one a while back 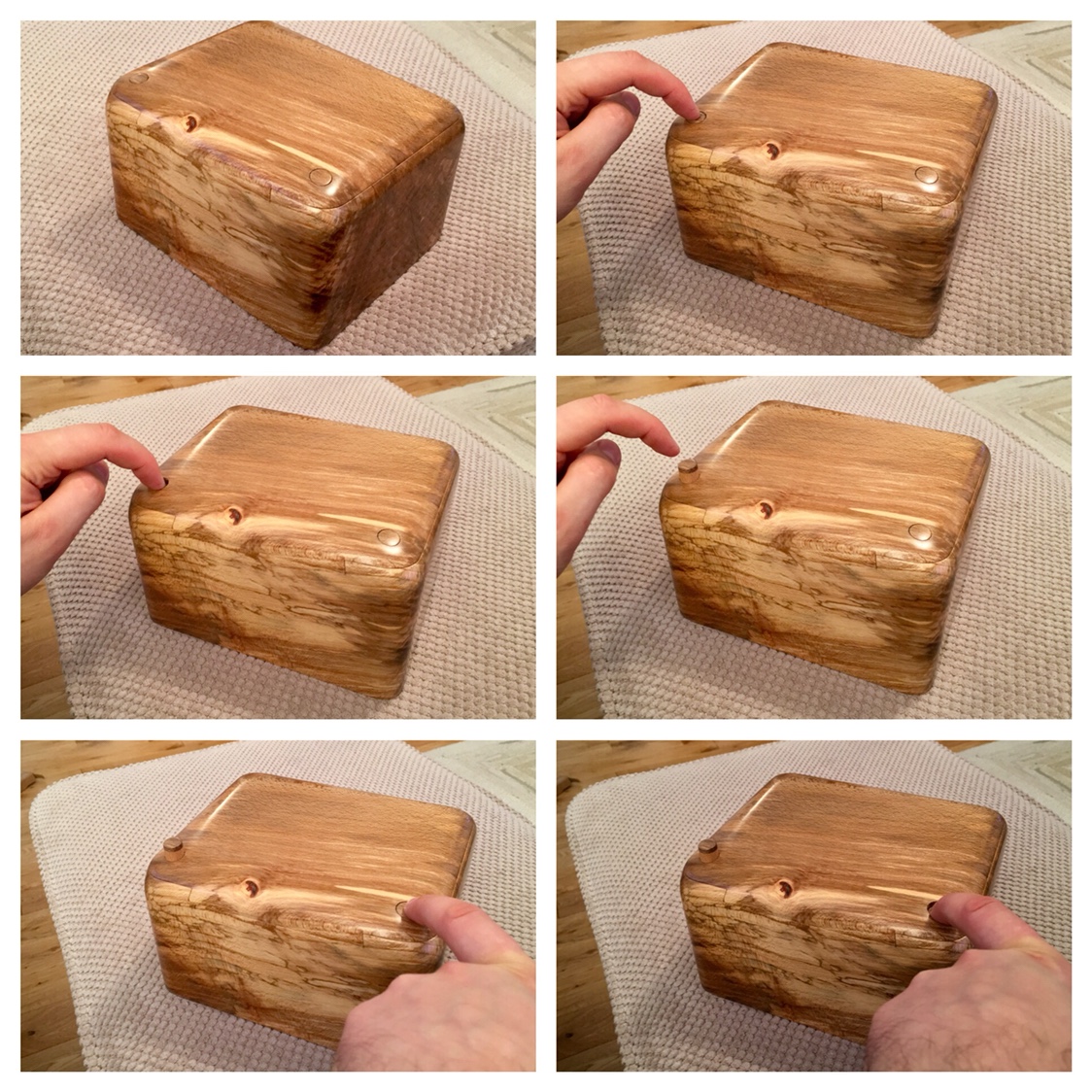 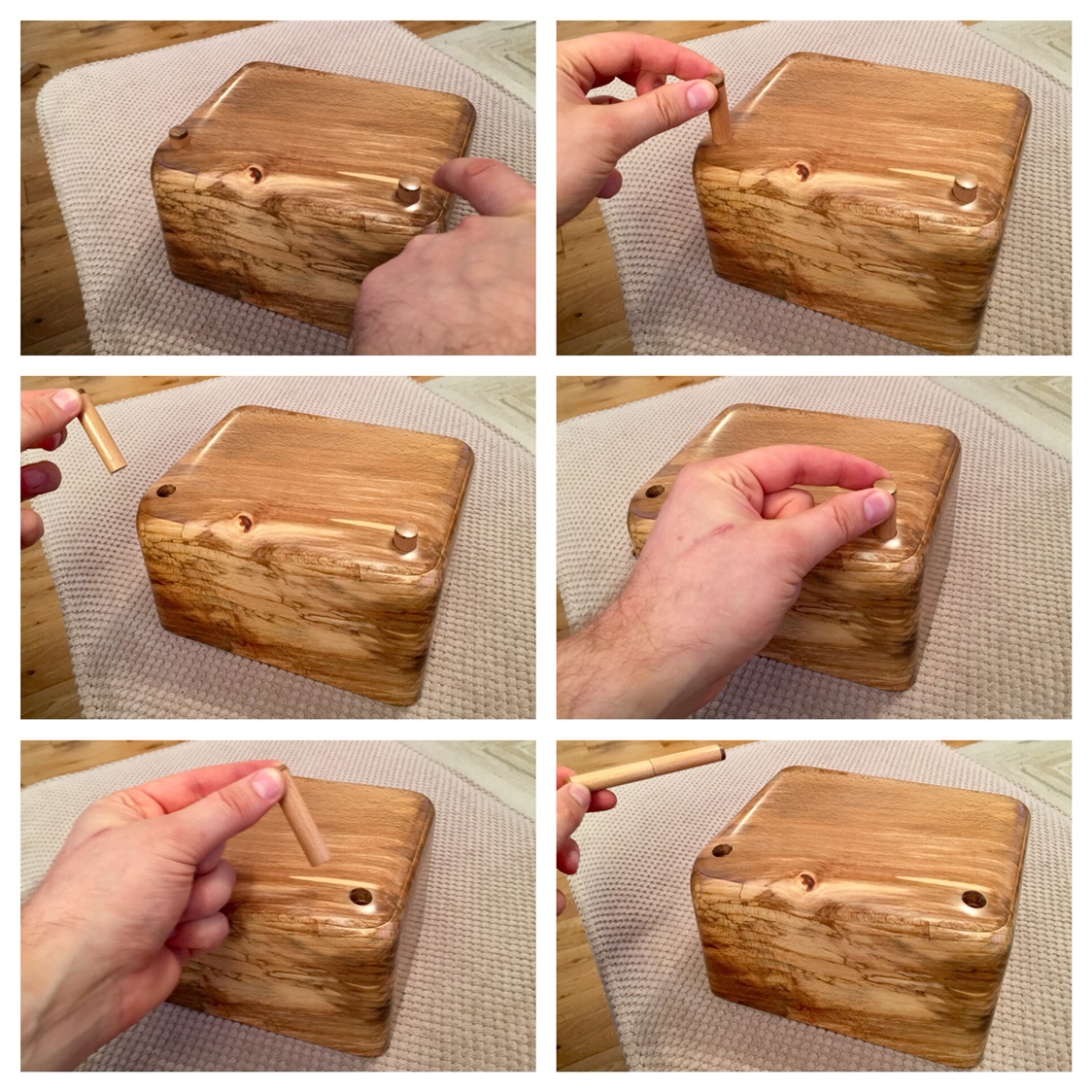 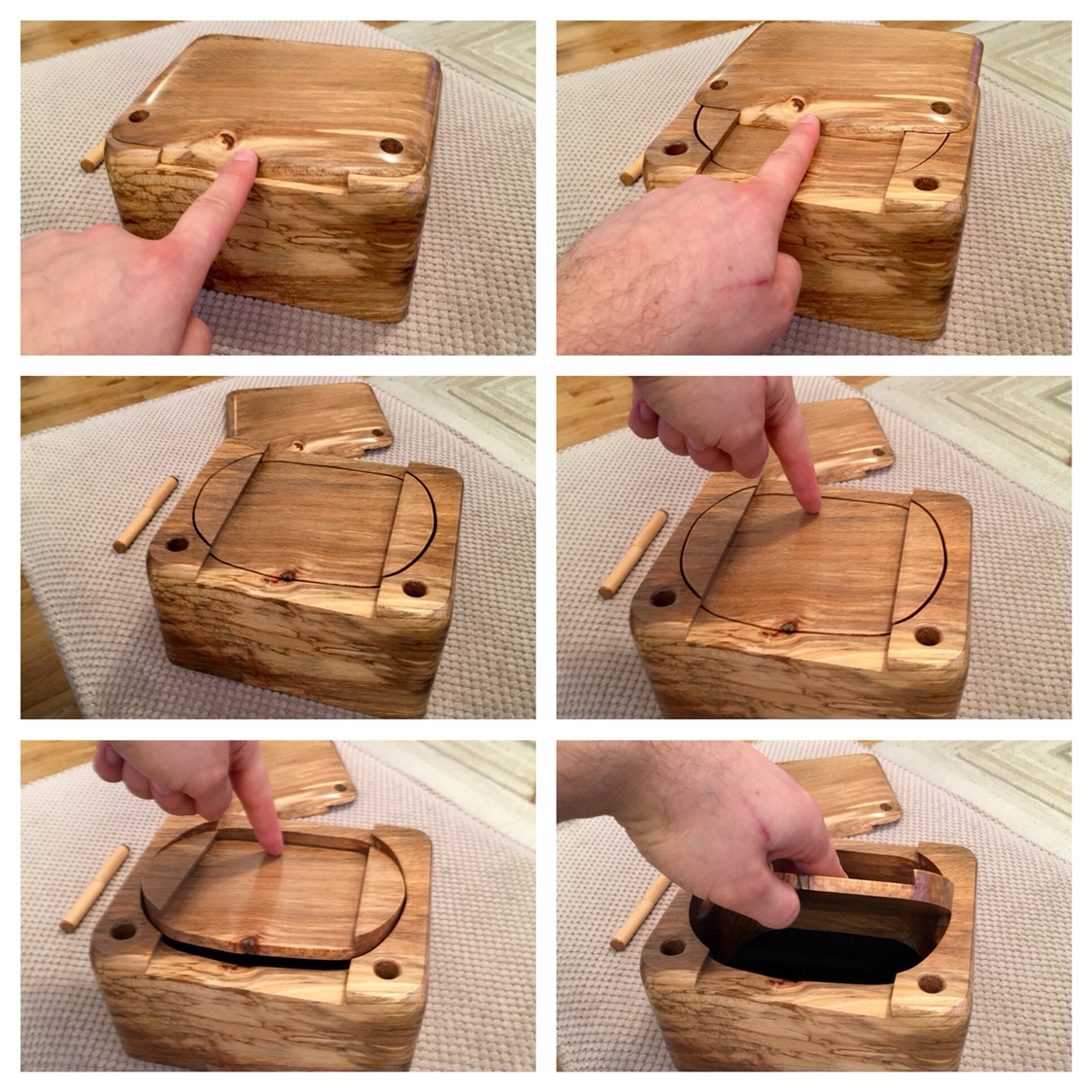 Not a plan, but I saw a nice idea on YouTube. Two blocks joined end grain to endgrain with a pair of diagonally cut dovetails, so the result looks like there is a dovetail on each face in an impossible lookimg configuration. The centre part of each block was then drilled out with a Forstner bit to turn it into a sliding lidded box. The locking mechanism was a ball bearing and two small cylindrical magnets - aligning holes drilled into the mating faces have a magnet glued in; one hole is deep enough that the ball sits on the magnet below the surface, the other so that the ball sits half exposed, preventing the lid opening. To lock and unlock, you smartly slam down the box, toggling which magnet the ball sits on - one way deep enough to open, the other obstructing the sliding lid opening.

Good look in following that description. It would have been useful if I could remember who's video it was ...

I suppose the ball bearing is not completely captive so judgement is needed on whether it is chikd safe enough.

This all started because I made this box for her brother, as a safeguard against her prying eyes,
https://www.youtube.com/watch?v=E-WeFZJFTZs&t=193s

But now its backfired on me because she wants her own secret box.

sunnybob":1j8pllel said:
Any one have plans or directions for a VERY SIMPLE secret box?
Click to expand...

Not so 'simple' but when this question was first posed I was in the process of making a Jewel Casket that had no obvious lock or easy opening.

There are 4 draws, three of which have knobs but they have to be turned to release the catch. The last can only be opened once the 'lid' has been opened and the release button located. To open the lid the Ebony bar has to be depressed which releases the two catches. There is also a hidden compartment behind that draw which is accessed only when the Ebony block on the right hand side is depressed, lifting the 'floor' under the 4 trays.

The mirror (Polycarbonate) swings out only when the 4mm wide Brass catch at it's base is pressed.

Thats a beautiful box =D> =D> .
But its beyond my capability to make, and way too nice for a 7 year old girl to play with.

I saw this the other day. https://az.vizion.lv/video/pHFDwRIsEMQS4w4%3D.html

the relevance is the mechanism, which you would incorporate into one of your usual boxes with a little thought. worth trying on a simple scale first.

That site wont let me in without clicking boxes, I dont do that sort of thing any more. :roll:

sunnybob":3njbsysj said:
But its beyond my capability to make, ...
Click to expand...

Surely not? - having just viewed your 'Gallery' I see many boxes that are more complex, just without the brass catches -- and I'll admit that without experience on a milling machine I would have found them impossible.
Interesting to see that you also paired Walnut and Maple. I'd like to know what you used for the 'red' interior covering?


sunnybob":3njbsysj said:
...and way too nice for a 7 year old girl to play with.
Click to expand...

Although I do get satisfaction from my boxes, and some flattering comments from time to time, I'm the first to admit they mostly arent complex.
I think youre referring to the jewellery box with walnut and maple. Which, strangely, was made for the same girl when she was 5 :shock: :roll:
But her mum read her the riot act about looking after it. Even then, she broke the mechanism, which I was able to replace.
She's now 7 and is a much rougher tomboy than she was. (hammer) (hammer)
Your box has so many interlocking components (and in a very small item), I just do not have the skill or patience to do that kind of work. To me thats closer to model engineering.
My work is usually A4 paper sized and weighs in at several kgs a time.

I love contrasts on my work, I use every exotic wood I can get and have no preconceived ideas of what goes with what.
The interiors are all "Flocked" with either red, blue or black. Its a very easy and reasonably priced way of making the box look nicer without going to the expense of satin or velvet.

sunnybob":24fub6lv said:
I think you're referring to the jewellery box with walnut and maple.
Click to expand...

Yes, I should have been more specific

sunnybob":24fub6lv said:
Your box has so many interlocking components (and in a very small item), I just do not have the skill or patience to do that kind of work. To me that's closer to model engineering.
Click to expand...

I'll admit that patience is necessary - - - the small front catches have a 1.5mm dia spring 2mm long between the support block and the catch itself and fitting those using Nº5 watchmakers tweezers was somewhat trying :roll:
To give you a better idea of the brass-ware, I've attached images of the SketchUp drawings with just a few dimensions.


sunnybob":24fub6lv said:
My work is usually A4 paper sized and weighs in at several kgs a time.
Click to expand...

I do occasionally work on larger items, today I've been fitting a vice to my work-bench using 8mm Lag-bolts and the like - a mile away from the M2 x 3mm screws used in the draw-front lock in the box!


sunnybob":24fub6lv said:
I love contrasts on my work, I use every exotic wood I can get and have no preconceived ideas of what goes with what.
Click to expand...

I did notice that you use Plywood which does give an interesting 'stripe' effect but I'm sure you have to be quite selective. The Musical Jewellery Box using Walnut, Padauk and Burbinga doesn't 'work' for me - I think it's the Brown/Red contrast (or lack thereof!) - but it might be the closeness of colour between the Padauk & Burbinga.
I do like the 'Bird's-mouth Joint Box' - Padauk can get a good finish but needs grain filler and a lot of 'after-work'


sunnybob":24fub6lv said:
The interiors are all "Flocked" with either red, blue or black. Its a very easy and reasonably priced way of making the box look nicer without going to the expense of satin or velvet.
Click to expand...

I suspected as much. I've known about flocking for some years but never been sure that it would stand up to the rigours of daily use. Nor have I properly searched for a supplier. I do use velvet and I have used satin, both are a pain to cut and fix accurately due to the problems of being able to cut absolutely on the weft and warp - (thinks . . . . maybe I should be cutting 'on the bias'?). The expense isn't great, even though I do use 100% silk velvet . For this box the velvet cost less than £4. When you consider the timber costs and the hours invested in such a project, that is chicken feed

Youve proven my point perfectly :shock:
We are leagues apart as far as patience and skill levels =D> =D>
The brown music box did turn out darker than I expected, because I make no plans, just go with the flow of the moment. 8)