I am currently interested in tool maintenance, and who would I be to ignore saw sharpening. I have an old Robt Sorby kangaroo saw that I want to restore and I thought it would be a perfect time for me to try and give it a new set of teeth.

The teeth at the moment don't look too bad and are currently at around 9tpi, but I wanted to know whether there would be any benefit in changing that to a higher, say 10/11tpi? And is there also a way to make this small change without removing the teeth and starting from new?

Hello
You don't say what kind of saw you have.
Is it a rip or a panel saw, a tenon saw or a dovetail saw?

Andy Lovelock has an excellent video on youtube called... sharpening western saws.
Might be a bit over the top for everyone at two hours long but is the best.
I sharpened a panel saw crosscut filed to 13tpi and it is rather fine cutting.
I wouldn't want that saw to be finer.
Tom

Hello Tom, Its a brass back tenon saw with 9tpi rip teeth

Hello again
Is this the only saw you want to work on, or do you have others?
If you file more TPI in a rip pattern, it will perform for both rip and cross cutting.
Guessing this is what you are wanting to achieve?

I don't have a back saw or tenon saw that course so can't give you an example,
but I presume you want a rip profiled saw that will start easier.

If you have files and are willing to retooth, I advise getting some wide masking tape, sticking it under the toothline and marking lines every half inch 90 degrees to the line to keep your spacing.
You don't need a fancy printed tooth profile.
I found this necessary to file teeth to 13 tpi after much mistakes before using the tape.
on the other hand, very effortless to just sharpen teeth that small if they are well spaced.
Nearly the opposite case when I cut the teeth for that panel saw by eye.

That's my experience, small teeth, harder to cut but easier to sharpen.

Here's another good thread on it from Deema

Hand Saw Restoration and Re-teething of a 99p saw Completed

I thought I might share how I bring an overlooked hand saw back into being a very useful thing. This is my method, step by step, I'm sure others will both help me and anyone reading this by suggesting improvements and ways in which I can do it better. All comments are gratefully received. I was...

Ttrees said:
.......If you have files and are willing to retooth, I advise getting some wide masking tape, sticking it under the toothline and marking lines every half inch 90 degrees to the line to keep your spacing.
You don't need a fancy printed tooth profile......
Click to expand...

Tom, you are a far better saw sharpener than I if you can eyeball a consistent tooth spacing from marks 1/2" apart! I always use either a paper template, with a mark for each gullet (they are available on the web, here for e.g.), or use an existing saw as a template.

You can cut new, smaller teeth over existing ones, but only if the new pitch is a multiple of the original. Another alternative is to take the saw to a saw sharpening place & have them cut new teeth at the pitch you desire.

Saw-sharpening has a steep learning curve & there is a world of difference between a well-sharpened saw & a poorly-sharpened saw, so it pays handsomely if you get it right.

Cutting in new teeth from scratch is hard on a file, & given the rubbishy things that pass for files nowadays, be prepared to use up a couple of files converting your saw. You will also need some help in keeping rake angles consistent, at first. This is the simplest way I know: 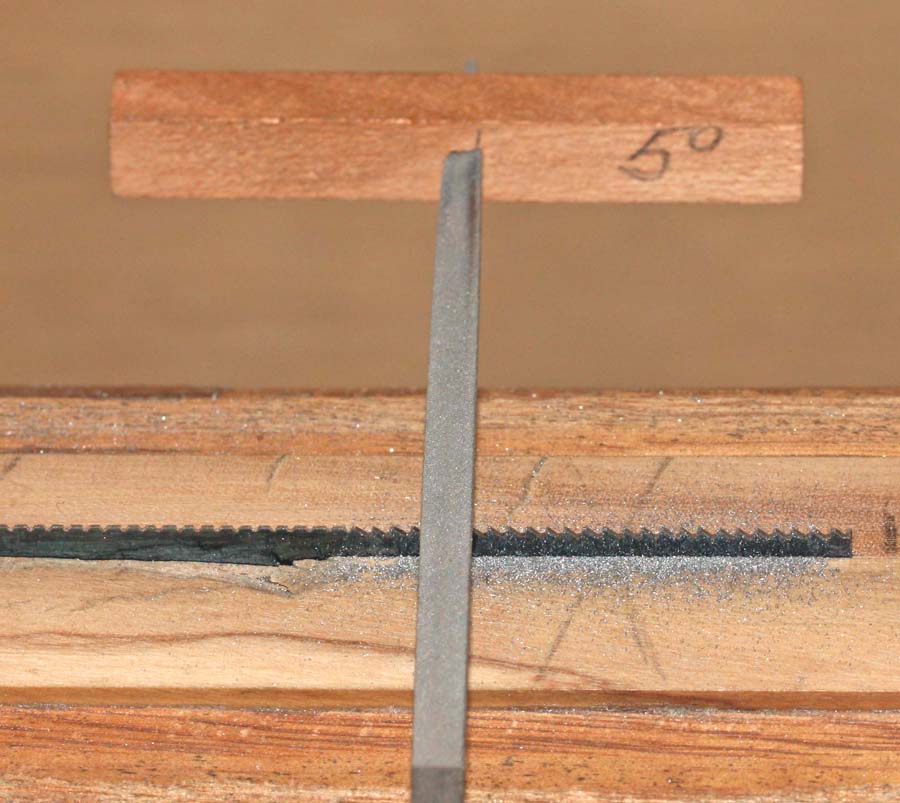 Rip teeth are very sensitive to rake angle - 5 degrees (negative) is a moderately aggressive rake for hardwoods, and I usually ease it back to around 7 or so for people who aren't very experienced in using saws. You'll find that cuts a little less aggressively (but still quickly enough if kept sharp) and starts a bit easier. You can feel a difference of just a coupe of degrees of rake angle with a ripsaw, unlike crosscuts, which are nowhere near as sensitive to rake (they typically have rake angles more like 12-15 degrees). Crosscut teeth are more sensitive to fleam angles, which are typically around 20 degrees, but can go much higher.

Anyway, a rip pattern saw is the one to start with, imo. With small saws (12 tpi & up) you can file all the teeth from the one side. While not generally advocated by the pros, it's easier to keep the teeth consistent when you begin by working from one side only, just keep the file square to the saw. Once you feel confident and can get a consistent result with them, you can move on to crosscuts. With two angles to keep constant (rake & fleam), you'll have your hands full to begin with, With a crosscut, you are virtually constrained to working from each side, and the change in stance & angle at which you are filing makes it hard to keep each set of teeth consistent.

It's definitely worth becoming competent at sharpening saws, a sharp, well-set saw is a pleasure to use, as well as being faster & more accurate. I reckon there are far more dull saws in the world at any given moment than sharp ones....

More determined than skillful Ian
It took me a few goes but I got there with that 9TPI saw.
It helps a lot having a nice comfortable seating position, good lighting, and a vice that you can rest your arm on 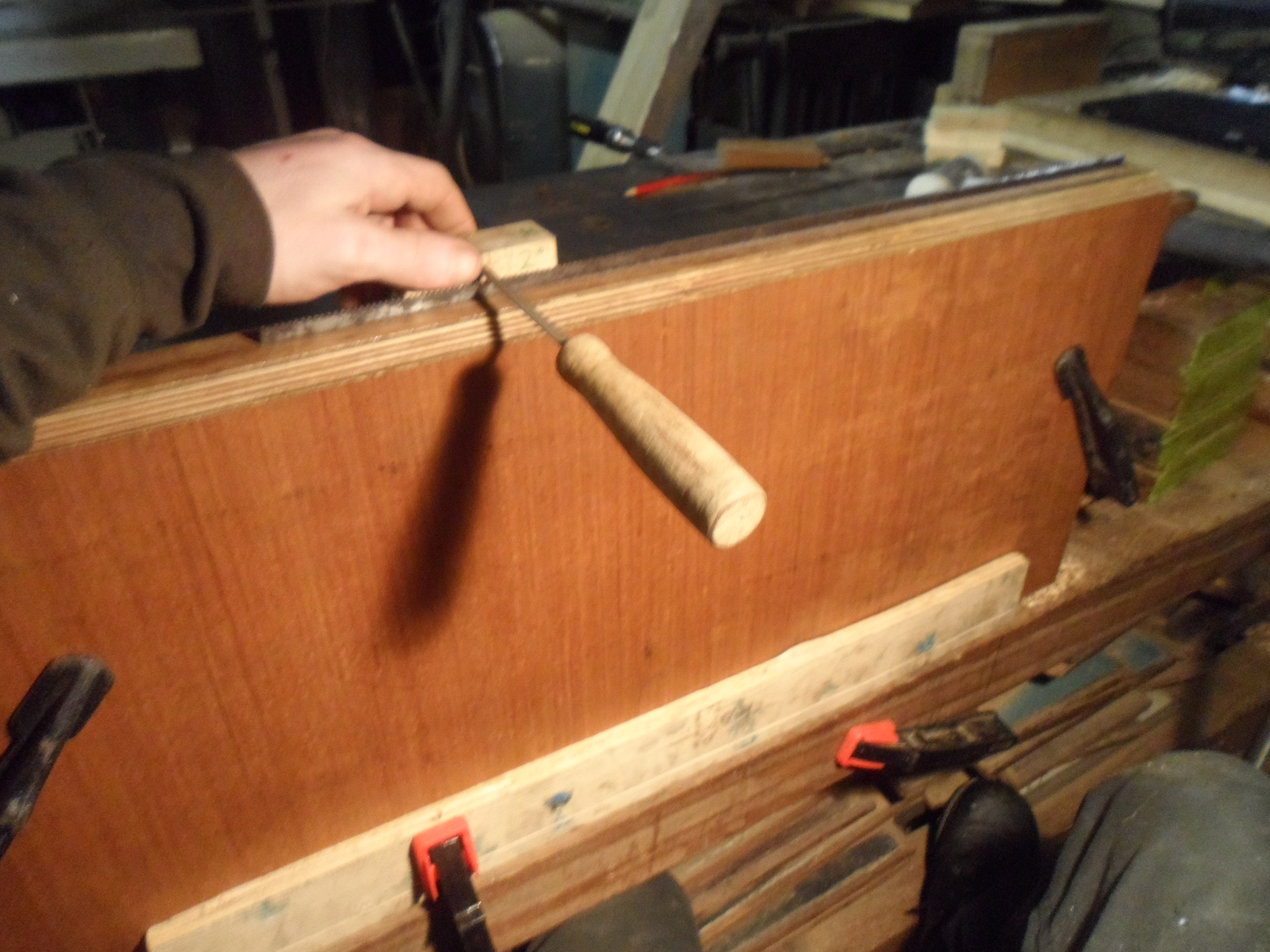 No matter how many files or how much sawplate there was,
I wouldn't be able to do that 13TPI saw without the half inch marks on the tape.
It still took some crowding to get spot on, but I have patience and had files.

I don't have a printer to take patterns from, so I can't say how helpful a half inch mark will be if I have to cut finer teeth, I will have to get back to you on that one.

I have a nice old dovetail saw that I want to sharpen, finer than 13TPI, will a double extra slim file from the likes of Grobet, be small enough for the job?
Could I use a regular smaller triangular file if there is a rounded profile on the edges...
or should I say, if not, grind a round profile by some means reliably?

Ttrees said:
....... I have a nice old dovetail saw that I want to sharpen, finer than 13TPI, will a double extra slim file from the likes of Grobet, be small enough for the job?
Could I use a regular smaller triangular file if there is a rounded profile on the edges...
or should I say, if not, grind a round profile by some means reliably......
Click to expand...

Tom, you need to specify the length as well as the slimness of a file. The cross-section increases with length, but the extra slim and double extra-slim files in the next length up often match the fatter cross-sections in the size below (i.e., 'regular' & 'slim'). It's hard to remember which matches which (there are tables that I can't find atm) but it's somewhat irrelevant in this day of poor quality control & erratic corner radii. You just have to learn which couple of sizes fit your needs. But indeed, a four inch DES "American pattern" file should manage 15tpi if it complies with the standards for that size. However, because files have become so erratic in their profiles vis a vis corner radii, I use a Grobet needle file for 15tpi & smaller. They are "Swiss pattern, 3-square" & don't fit the American pattern classification, but they have sharp, consistent corners. I think Grobet do make American pattern files, but they aren't available down in this remote corner of the world, unfortunately.

Here is what I think is a useful treatise on saw filing, which includes a table of file sizes suited to the different tpi. Because of the aforesaid combinations of cross sections in the different lengths, you can substitute if you know your files, but it takes a while to learn which sizes you can interchange for a given tpi, so it's easier to stick with what's suggested in the table to begin with.

I certainly wouldn't try modifying corner radii by grinding! You'd simply remove the teeth & it would cease to cut at the corner, which is the kiss of death for a saw file. I do take files to the grinder on occasion, but only to remove teeth & produce 'safe' edges for specific jobs like filing out the corners of metal dovetails...

The use of a hacksaw blade clamped or taped to the workpiece will give the tooth spacing.
Using every other hacksaw tooth would give 12tpi from a 24 tooth blade, 9 from an 18 tooth etc.

If it’s your first attempt at saw sharpening, retain the tpi and sharpen to rip.
This is my go to tenon saw type.
The success will give you confidence with the least likelihood that you will muck up.
remember that you will need a saw set.
C

I had been neglectful and both my tenon saw and my dovetail saw were past redemption, so sharpening wasn’t going to be enough and the firm I send my cutters to to be sharpened re-cut all the teeth for £6.50 per saw plus VAT.
I thought that was extremely reasonable. Ian
D

Cabinetman said:
I had been neglectful and both my tenon saw and my dovetail saw were past redemption, so sharpening wasn’t going to be enough and the firm I send my cutters to to be sharpened re-cut all the teeth for £6.50 per saw plus VAT.
I thought that was extremely reasonable. Ian
Click to expand...

who do you use Ian, I can’t seem to find a saw doctor close to me that does hand saws
C

N. S. Tooling in Scunthorpe, they do my circular saw blades as well, come back dipped in that lovely wax stuff that’s so much fun to take off ha ha

and there are others.
Well presented, clear and informative.

pe2dave said:
and there are others.
Well presented, clear and informative.
Click to expand...