Hello, I need to round over some 1x2 pine on my first woodworking project and have come to a bit of an impasse. I have a titan 1/2" plunge router and thought it was going to be as simple as just running it down the side of the wood, I am however finding during my practice run that when I get to the end of the workpiece I don't have enough control to keep the router flat and I end up with an inconsistent round over.

My initial thought was to mount it to a scrap piece of 12mm mdf but I don't think that the titan router has an option to have it run without me holding the switch and I also don't think that I've got sufficient remaining plunge depth to make up for the 12mm of mdf.

Is there a solution that wont involve me buying more equipment?

Put another 2x1 or something else of the same thickness at the end of your cut to support the router before it falls off the end?
B

Well that's certainly a simple solution, thanks! I assume any wobble I might get in the middle would be hidden when I come to sand it

how large a roundover are you making? is it just to take the sharp edge off or more?

This is the one and only time I recommend a 1/4" router, over a 1/2".
Buy the cheapest 1/4" hand held router you can (I believe they can be had for 30 quid), with a on / off switch, and then its the easiest thing in the world to just run it along planks.

I have 2, with different shaped roundover bits in each, and its a piece of cake.
B

marcros":2hu0vzbf said:
how large a roundover are you making? is it just to take the sharp edge off or more?
Click to expand...


sunnybob":2hu0vzbf said:
This is the one and only time I recommend a 1/4" router, over a 1/2".
Buy the cheapest 1/4" hand held router you can (I believe they can be had for 30 quid), with a on / off switch, and then its the easiest thing in the world to just run it along planks.

I have 2, with different shaped roundover bits in each, and its a piece of cake.
Click to expand...

I've had my eye on the katsu one for a while now was hoping to wait out long enough to put it on my Christmas list might have to bite the bullet.
R

For that sort of thing I find a couple of swipes with a hand plane and then a quick sand to round it is quick enough.
T

Did you read the OP?

An 1/8" cutter would take off less than 1/16" - a couple of wipes with a decent abrasive would be quicker than any router.

I was also going to suggest sandpaper.

With that said, I have one of the little katsu trim routers (£30) and a wealdon bit (can't remember size but it was the smallest but 1 roundover bit) and it does a great job on such tasks.
B

Would I be able to do this with an orbital sander or should i do it by hand?

If all youre doing is taking the sharp edge off, then use a strip of sand paper around 120 grit. Bunch up a piece of rag in your hand and use that to push down on the paper. Run it up and down the length of the board a couple times.
Dont use a sander, you will get random deep and shallow areas.
C

The 1/8 radius round over bit is my most used cutter now. So my so I put the corded katsu aside and bought a cordless makita to use with it. 1/8 bits can be bought very cheaply from China (less than £2.50 each)
This is a particularly good deal -

bananas":3p2h6ht0 said:
......Is there a solution that wont involve me buying more equipment?
Click to expand...

Yep, a block plane and sheet of sandpaper. Quicker and more reliable. No balance issues. You've fallen into the trap of thinking that a power tools is the answer, and you're now discovering that like all tools, they have limitations. A 3mm round-over is just a quick touch with hand tools, and you'd have finished doing it by hand before you'd even fitted the right bit into your router if you could race against yourself using both techniques.
C

Could you make a sub base from something thinner ? This is something I use for doing a potentially rocky/wobbly task- 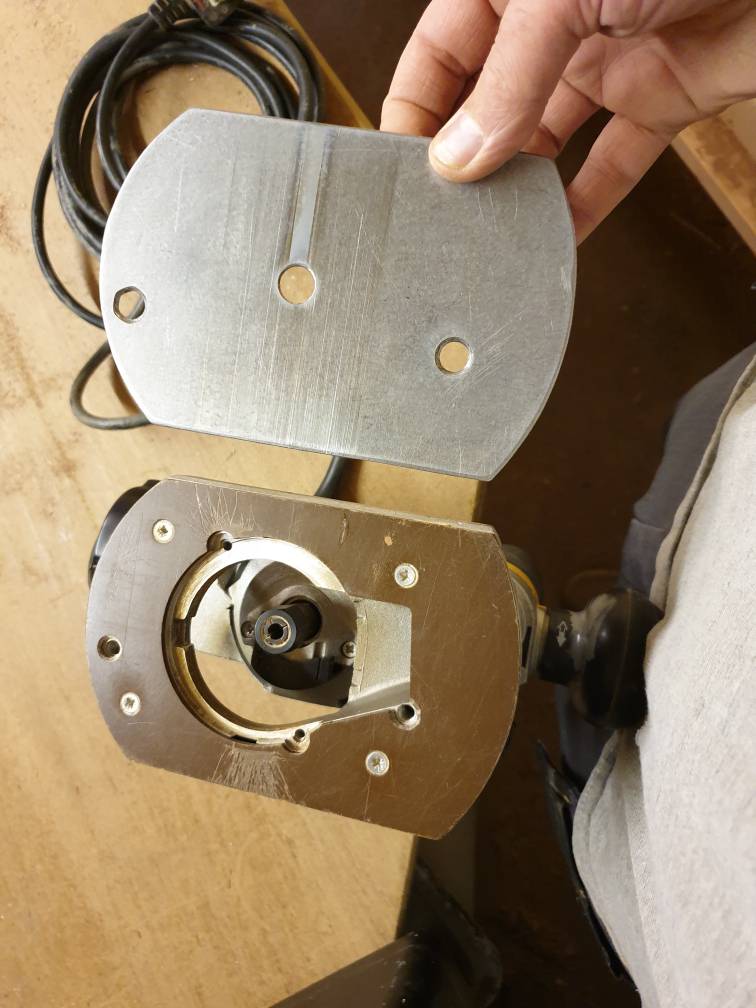 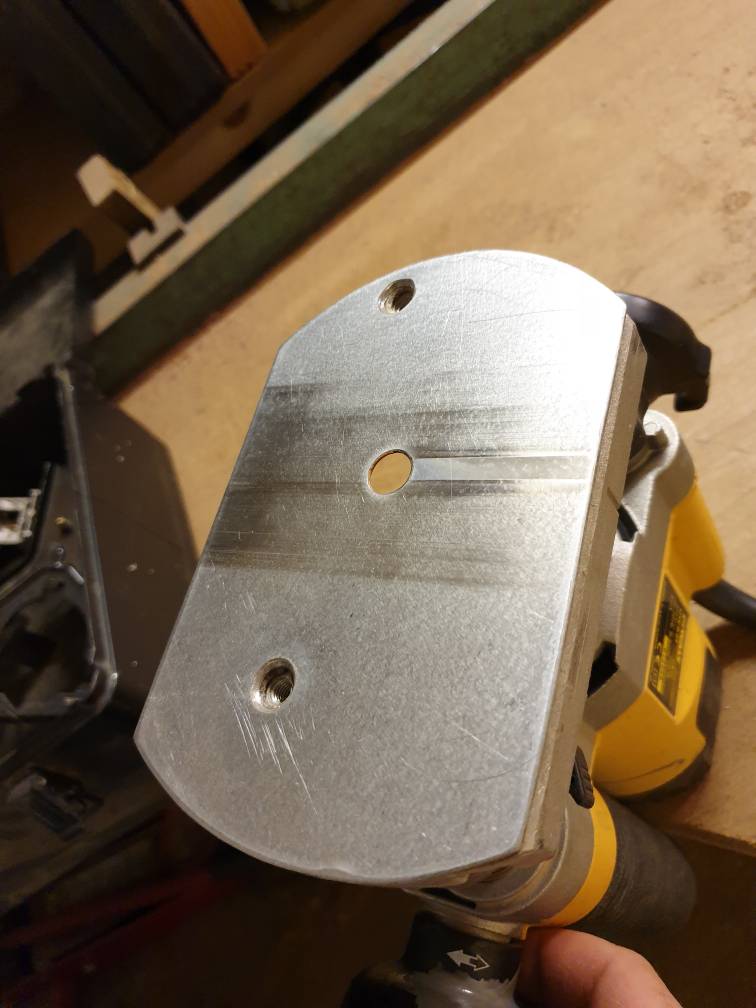 It's much easier to control than a traditional 2 handled router and there isn't such a whopping great hole around the cutter so less chance of a wobble on ends of timber.

Also don't forget if doing a rectangle (or anything where you roundover all the way round a surface), you still need to be aware of the grain direction:

That's not foolproof though, so it's usually worth having a support/backer piece clamped to the far end of the work for those first cross-grain cuts. That stops any splintering you can't remove later. Also on the long-grain make one last, climb-cut pass, removing a tiny amount of material.

It's also worth practising to get the speed right - both the cutter RPM and the feed rate (how fast you move the router along).

I have two small routers, only one has variable speed but they are otherwise identical. The flat-out one easily burns the work if I'm not careful, but the adjustable one can be set up for an excellent cut. One of the issues you don't have with hand tools is that moulding cutters are running at different speeds in different parts of the shape they cut. The blade is going more slowly near the centre of the cutter. So you tend to get burning where the cutter blade is moving fastest (at its outer edges).

All that said, I, too, would reach for a sanding block first - far quicker and easier really. If you want a better roundover, you can shape quickly with a plane or a rasp (block planes work best cross-grain, but a traditional Bailey-style #4 will still give good results if it's sharp), and finish with sandpaper.
J

Eric The Viking":1eksdceb said:
.... If you want a better roundover, you can shape quickly with a plane or a rasp (block planes work best cross-grain, but a traditional Bailey-style #4 will still give good results if it's sharp), and finish with sandpaper.
Click to expand...

Yes if you haven't masses to do, do it by hand. It's a very useful bit of planing skill to acquire. Start by drawing the quarter round profile with a stencil or similar, on the ends of your blank, then join up the pencil lines with a plane. 45º bevel to the line, then take off the arris's, then fine plane or sand
I hate routers - I avoid them like the plague; the noise, the dust , the fiddling, the expense!
PS or if it's just a 1/8 radius just wave a bit of sand paper at it as others have described above.
You must log in or register to reply here.
Share:
Facebook Twitter Reddit Pinterest Tumblr WhatsApp Email Link