Had to get rid of my old piano and since nobody else wanted it decided to break it apart. Some heavy duty timbers, joints unbreakable. Took me half a day to completely dismantle it. Kept a few pieces for future projects.

Have a nice Sunday.

I’ve dismantled a few old pianos. The frame is usually made from good quartersawn slow grown wood, and there are other good quality timbers that are salvageable too. They are pippers to take apart though.

I love that first pick, hammer, axe, bigger hammer, and of course some safety goggles!

Have you kept any of the piano keys? I was after some for my winding sticks project.

No SMALMALEKI , I had partially dismantled the piano about 2 years ago, removed the action mechanism including all the keys, hammers etc..and stored it like this until yesterday, was using it as a shelf.

Osvaldd":2u9vop8f said:
No SMALMALEKI , I had partially dismantled the piano about 2 years ago, removed the action mechanism including all the keys, hammers etc..and stored it like this until yesterday, was using it as a shelf.
Click to expand...

Hi Osvaldd
Thank you for your reply. Have a happy woodworking.

Agree, not the easiest thing to break for timber. I thought I would post some photos of my Piano exploit. The Piano belonged to my niece. She learned to play at it over many years until it was finally condemned by the Piano tuner as not worth repairing. It was a family item that we thought was around 100 years old. Since my niece spent many happy years playing it I thought I would turn it into something useful for her first house with a twist of a little reminder of what it once was was. I did not tell her what I was making, in truth I had not really decided when it stripped the wood out what I was going to make. She only saw it when I delivered it as a surprise birthday present for her.

The Piano was made from Oak, good quality but hard and time consuming to extract! Once every useable piece was salvaged it looked like this. Quite a lot more than initially expected. 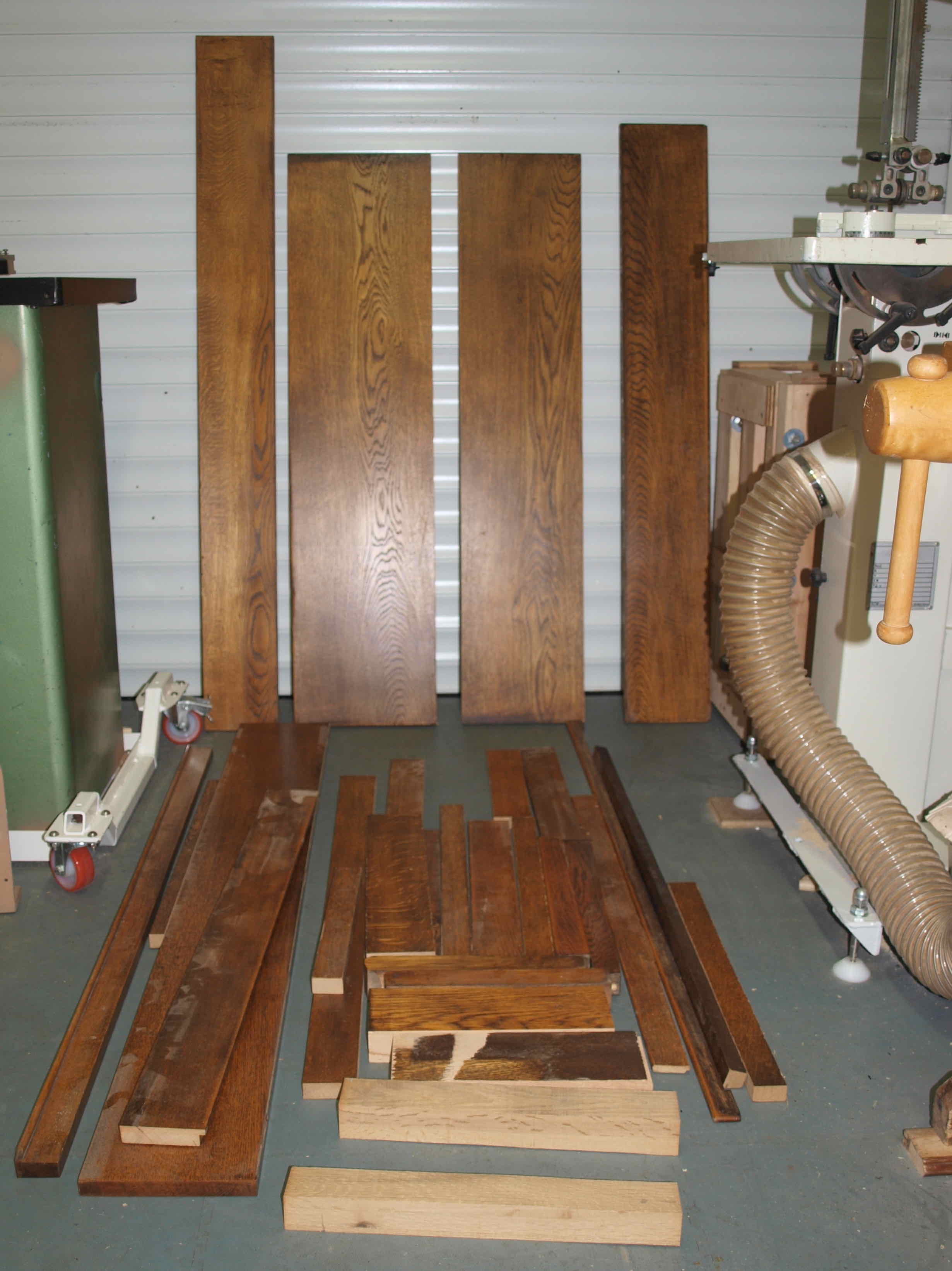 I then selected some pieces for a table top 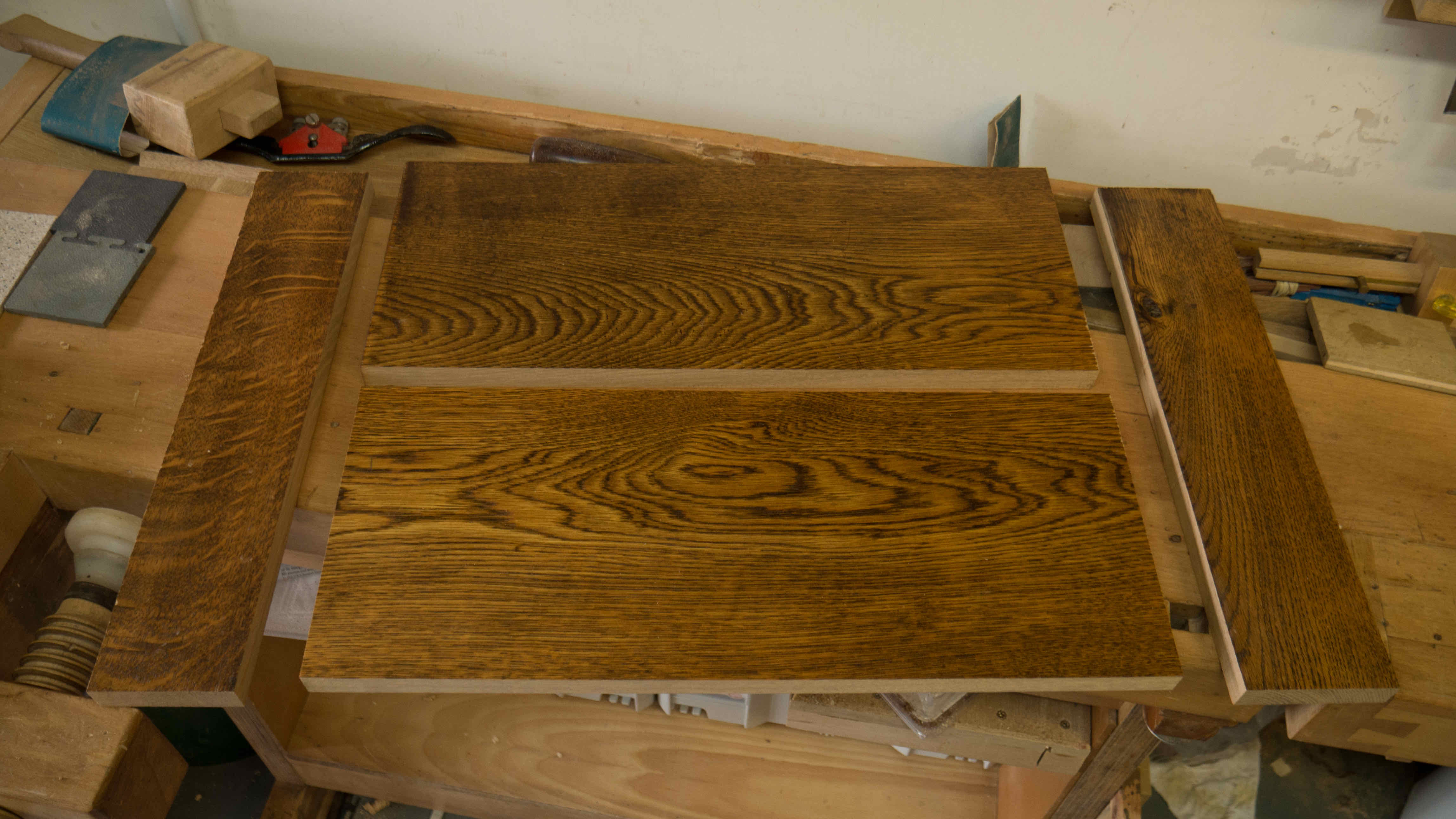 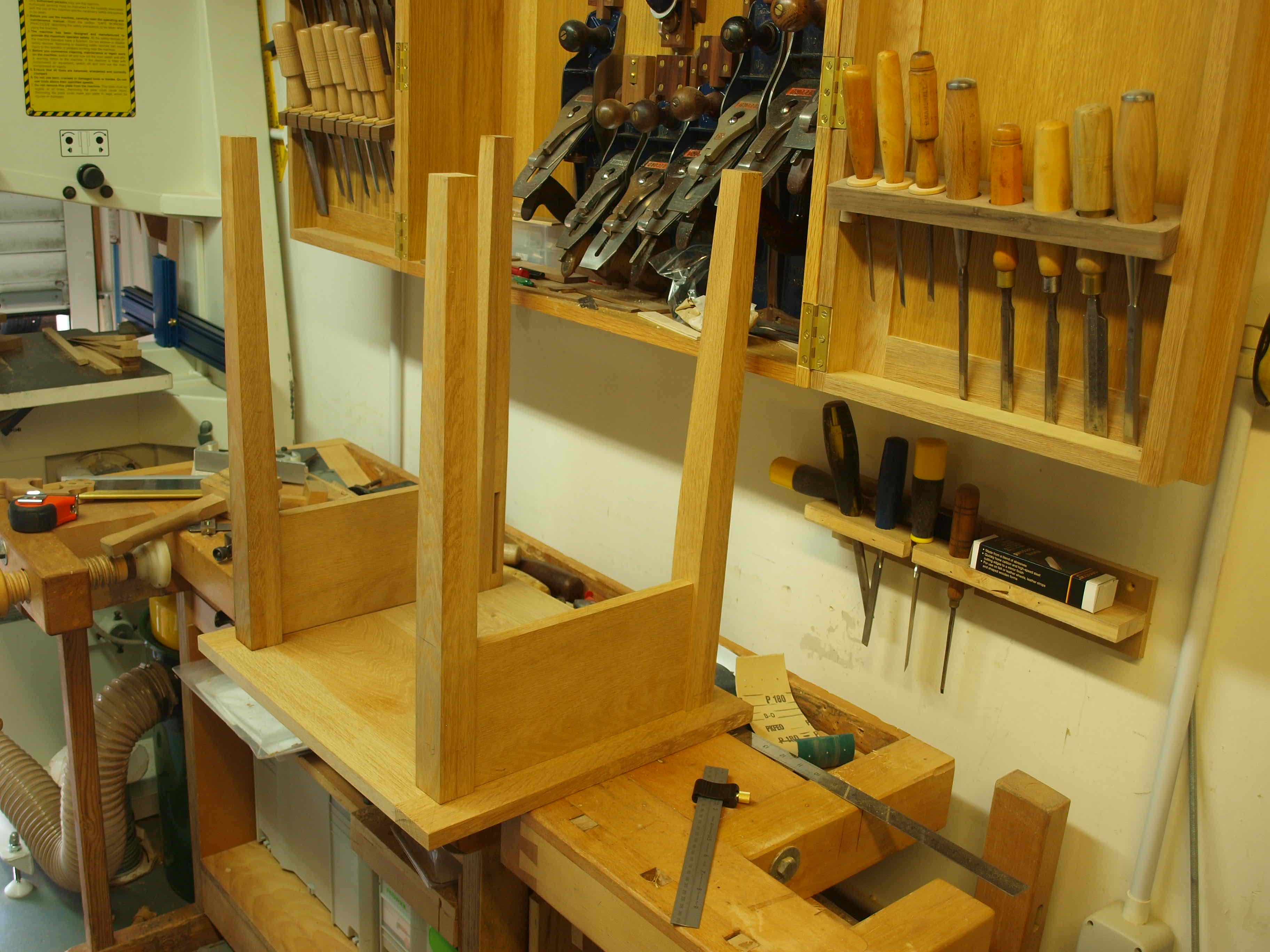 I selected and fitted some German Hettich push to open drawer runners, you will see why in the next photos 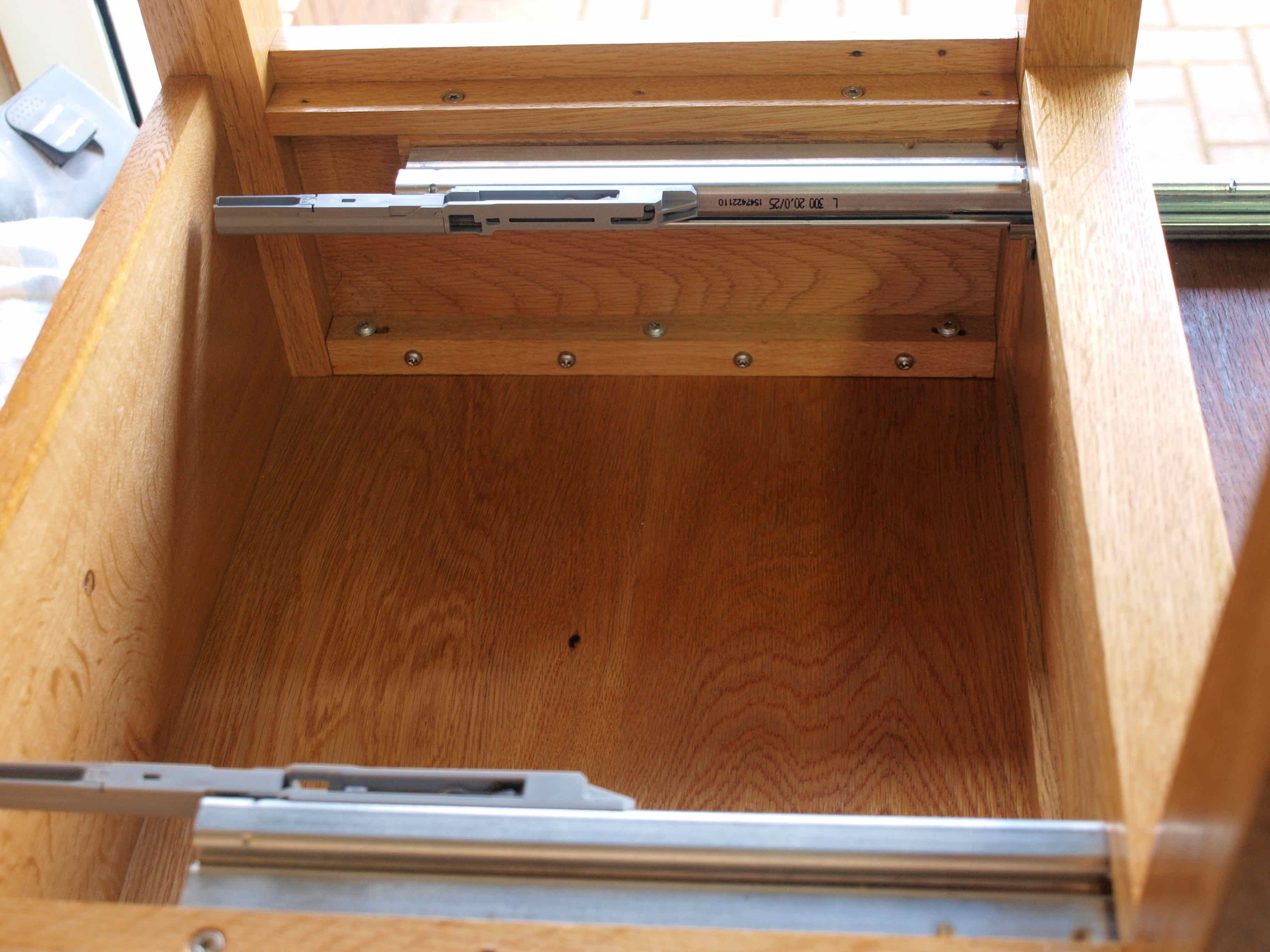 And then made a drawer, reusing the Piano keys as a drawer push 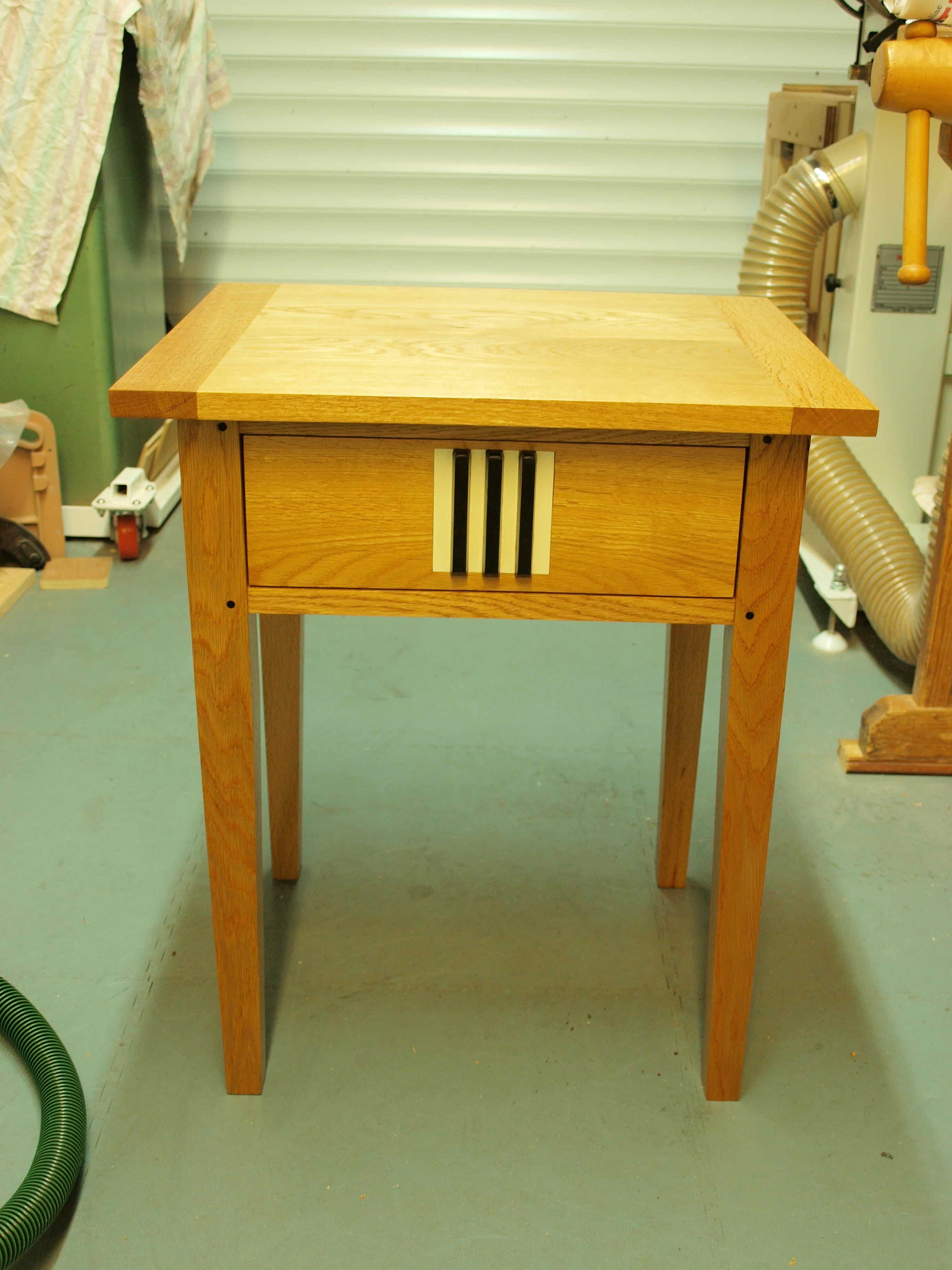 And incorporated the makers mark (actually probably the distributor or agent) from the original lid to the rear of the drawer. 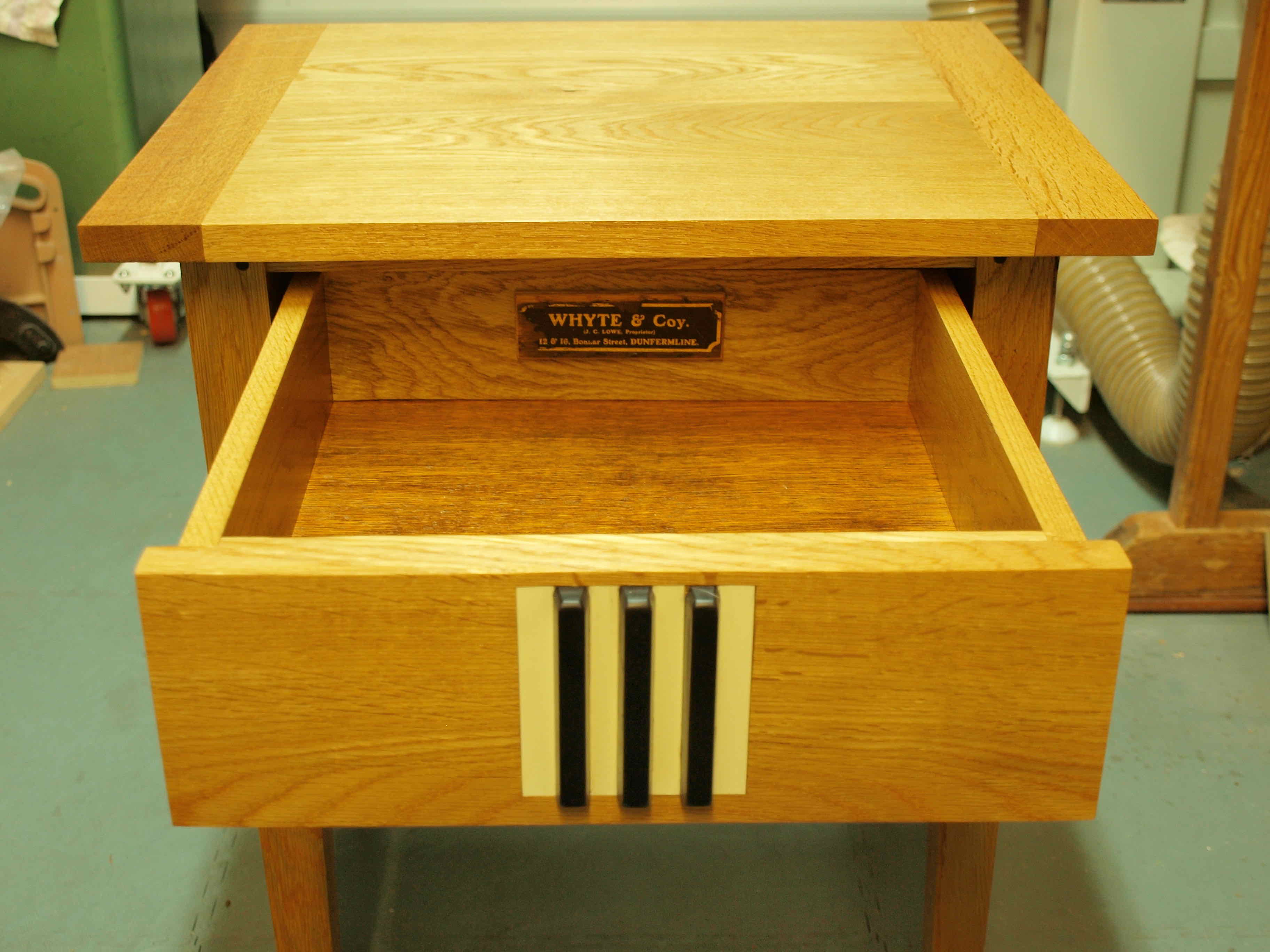 I think she really liked it and it will always remind her of her first piano and it also was from the recycling centre. Maybe the finished item / style is not to everyone's taste but I learned a lot as it was only the second piece of furniture I had made at the time. I have made a lot more since but anyway nice to save something for the future.

really like it! as a musician myself can't deny it made me feel a bit sick, but it's been put to good use,

that is some really nice top quality oak, you just wouldn't find oak like this now! and it'll be well acclimatised, good to see it being re-cycled like this =D> =D> =D>

I was told at school 50 years ago there were firms taking old, quality pianos in order to recut the saw cut veneers. :shock:

Lovely piece of work. I particularly like the reference to what it was originally, a real heritage item.
G

Absolutely love how you've recycled this and kept the elements of the piano for the drawer.

Nice desk NDBrown
After salvaging some pianos myself, I can concur dismantling them is not easy work.
I came across a really nice old piano before, that had to be dropped from a second story into a skip
It was too fancy, I dismantled it to get the soundboard, metal frame for strings for my own, the keys and the panels...
I didn't think the frame timbers were that special, but this was before I got into wood, proper.
Did you folks salvage the soundboards?
The grain is a bit wide for guitars and the likes but I may make one from the tightest grained boards for fun.
The braces on all looked pretty good stuff to me though.

One use for quartersawn tight grained spruce like this would be a hygrometer.
Couldn't find a clear picture
FF to 1:37 into the vid
[youtube]XhlyzoeA_7E[/youtube]
D


SMALMALEKI":tfebba2w said:
Have you kept any of the piano keys? I was after some for my winding sticks project.

Seyed, I have sent you a PM

I like that really nice idea,nice piece and as you say she was very chuffed.

B
Roubo Workbench Build (Brought to you at SnailSpeed)

5 May 2022
DavidConnelly
D
B
Titan Planer Thicknesser Review (Another "almost, but not quite" from screwfix)

Another help with wood identification thread.