(more) improvements to the mini lathe

Following on from my Milling attachment for a mini lathe thread...

I removed the bolts holding the plates on the underside of the main carriage (they have a nasty tendency to work loose over time due to vibration) and removed the grub screws from the plates. The bolts were replaced with studs (threadlocked into the carriage) and brass shims were used to set the fit with the ways: 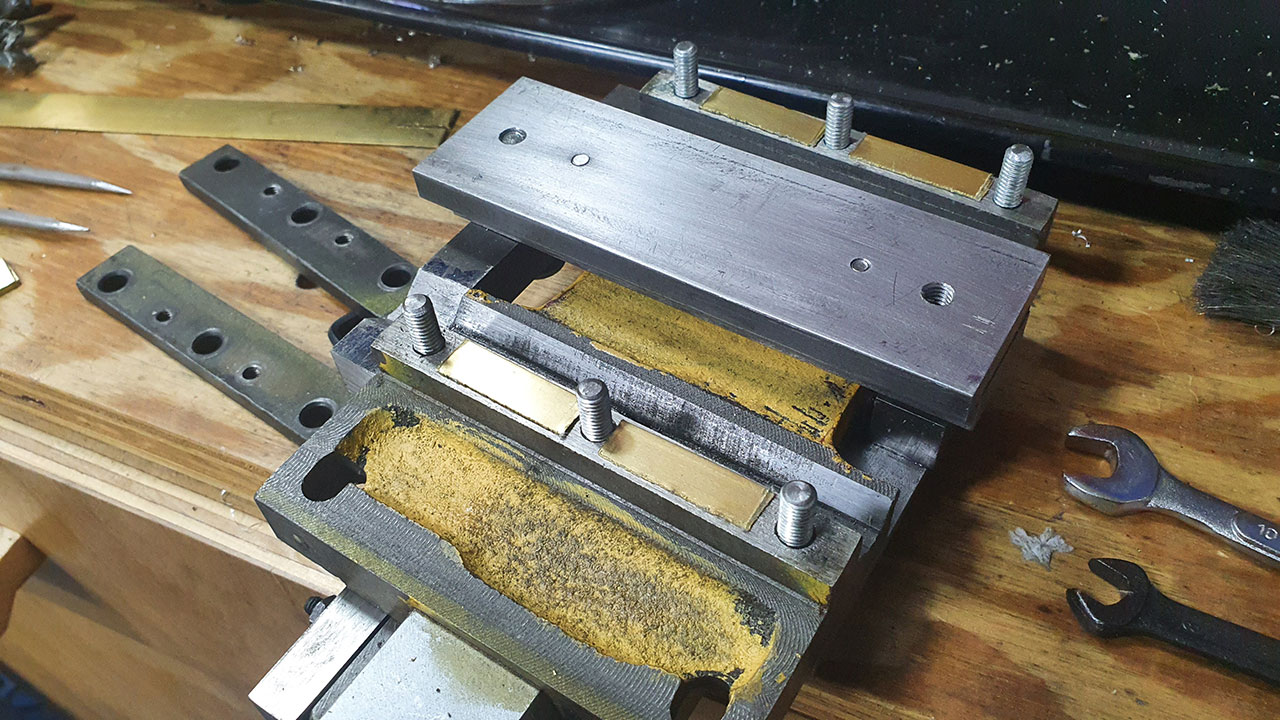 Plates held on with nylock nuts: 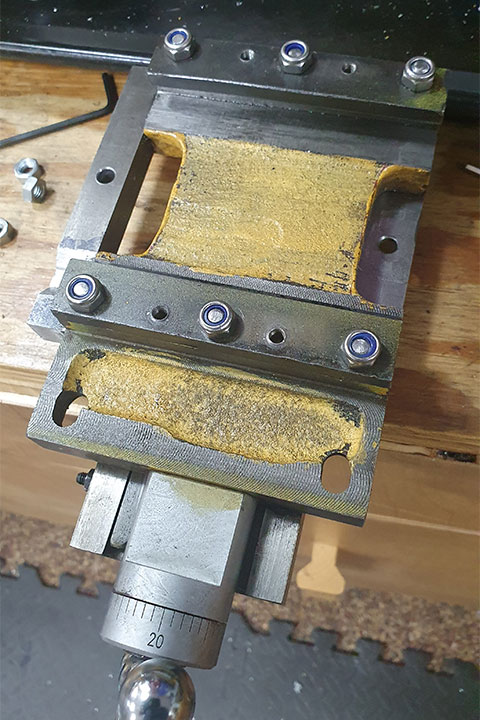 Carriage refitted, and another shim was used on the central "T" shaped block between the ways (see the previous thread for info on that block): 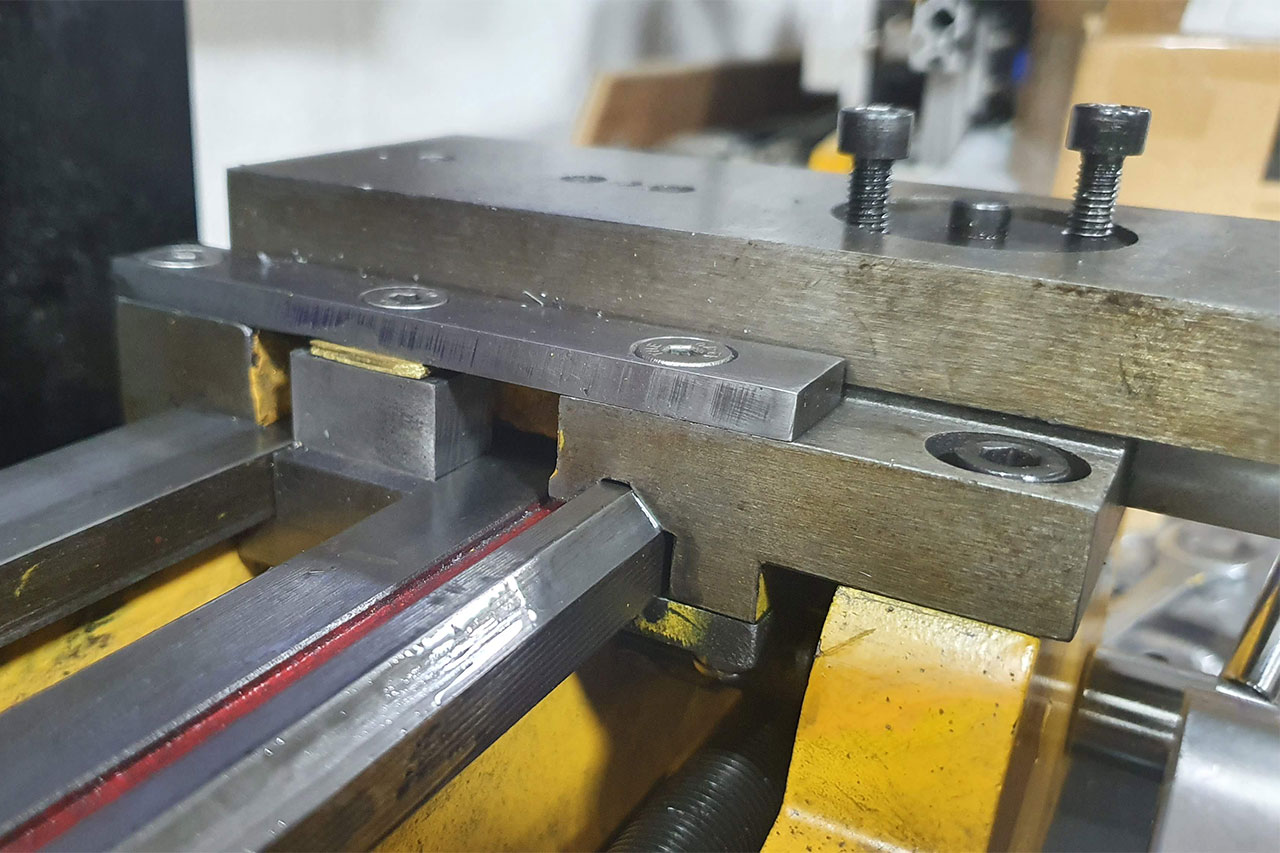 The fit is now good - with minimal carriage flex. Another (unexpected) benefit is that all but the front central nut (i.e. 5 out of 6) are accessible with a ring spanner even with the lathe put back together. With the bolts it was hard to get an allen key in to tighten them up (without removing the carriage). That, combined with using nylock nuts, means that I hope the tight fit of the carriage to the ways will be relatively easy to maintain.

The compound slide is another source of flex in these little lathes. As I had the compound slide removed from the cross slide on the carriage, now was a good time to make a solid replacement. I had the idea of making a long platform; that would allow the tool post to be mounted in two different places.

I got some 20mm thick mild steel (as the compound slide is approx 40mm thick) and made the following: 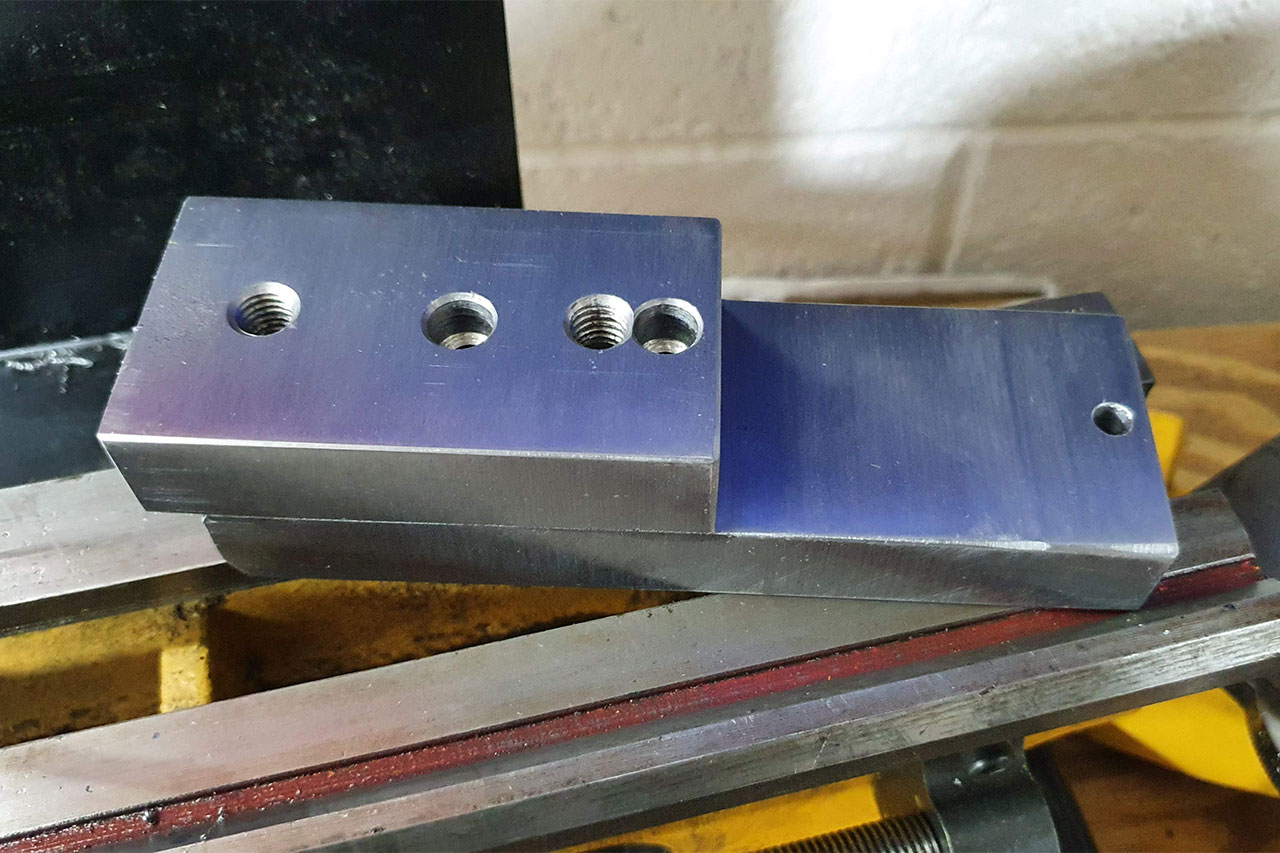 Here you can see the four holes on the bottom - three for bolts to attach to the cross slide, and one for the central point of the circular base: 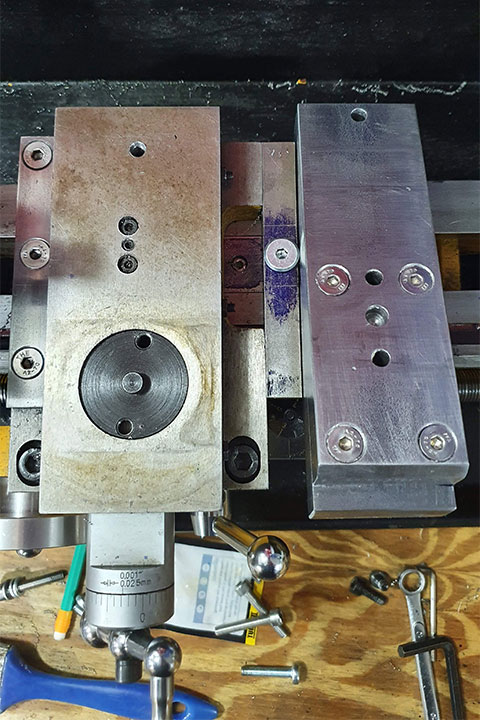 I got lazy with drilling a pocket for the far bolt head, but it won't be in the way. You can see the two tapped holes for the near and far positions for the tool post mounting rod. The one closer to the lathe center line is the same distance from the center line as the compound slide at 0 degrees (i.e. "as normal"): 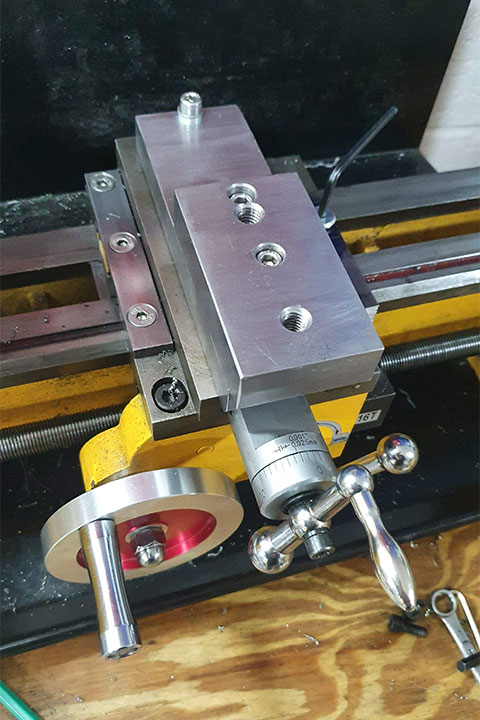 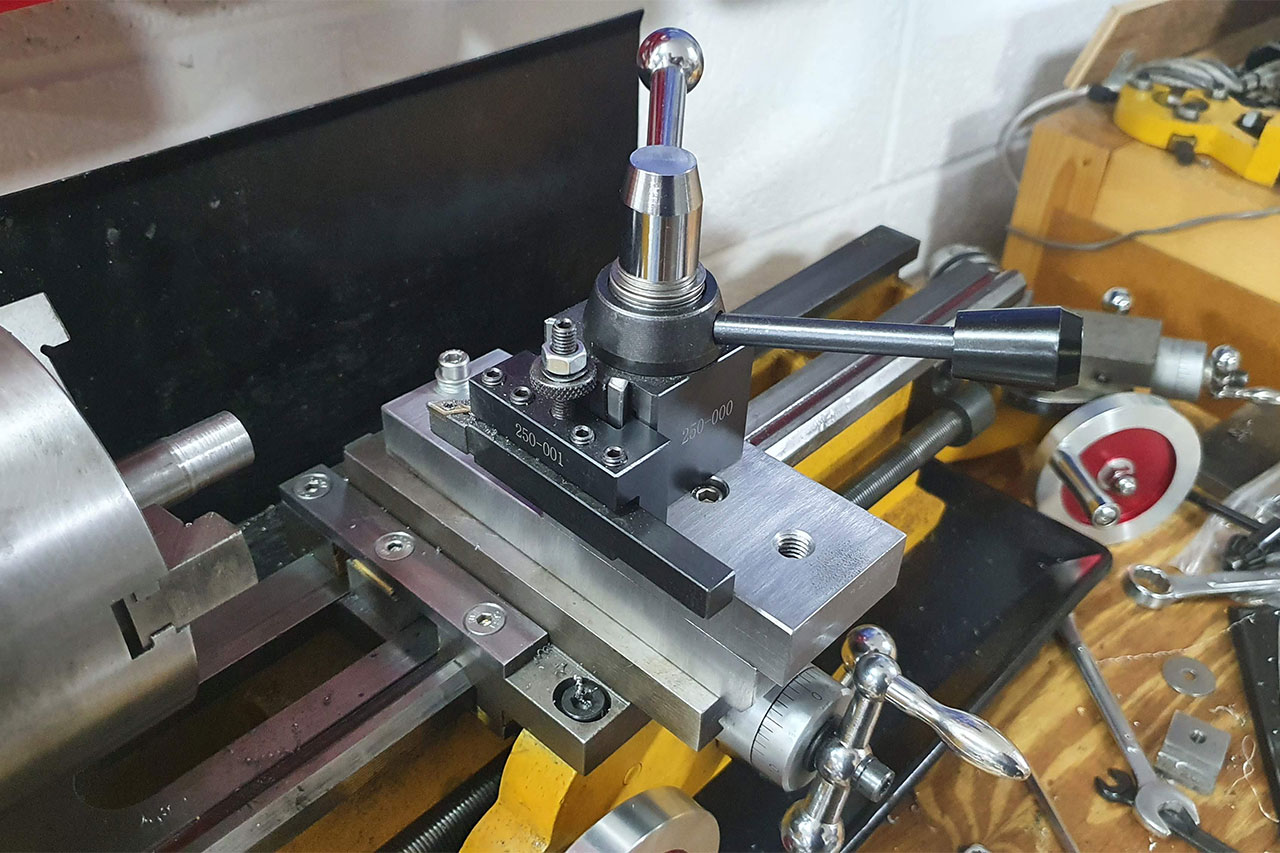 And the far position (you can just get the tip of the tool to the lathe center line in this configuration; though it's really intended for accessing the sides of large diameter stock): 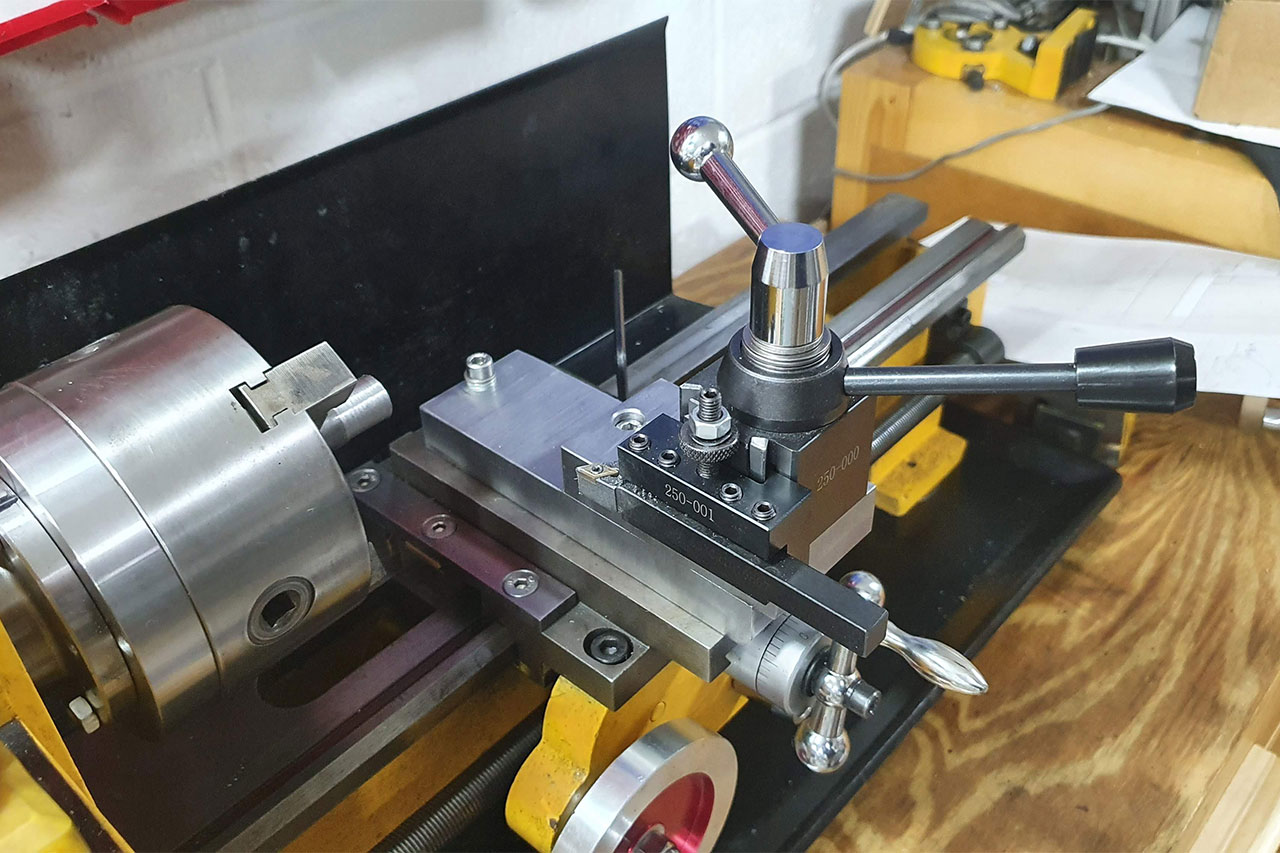 I can now turn larger diameter work - or more specifically; I'll get more rigidity (vs the compound) whilst having the tool perpendicular for the work (which is critical for a parting off tool). 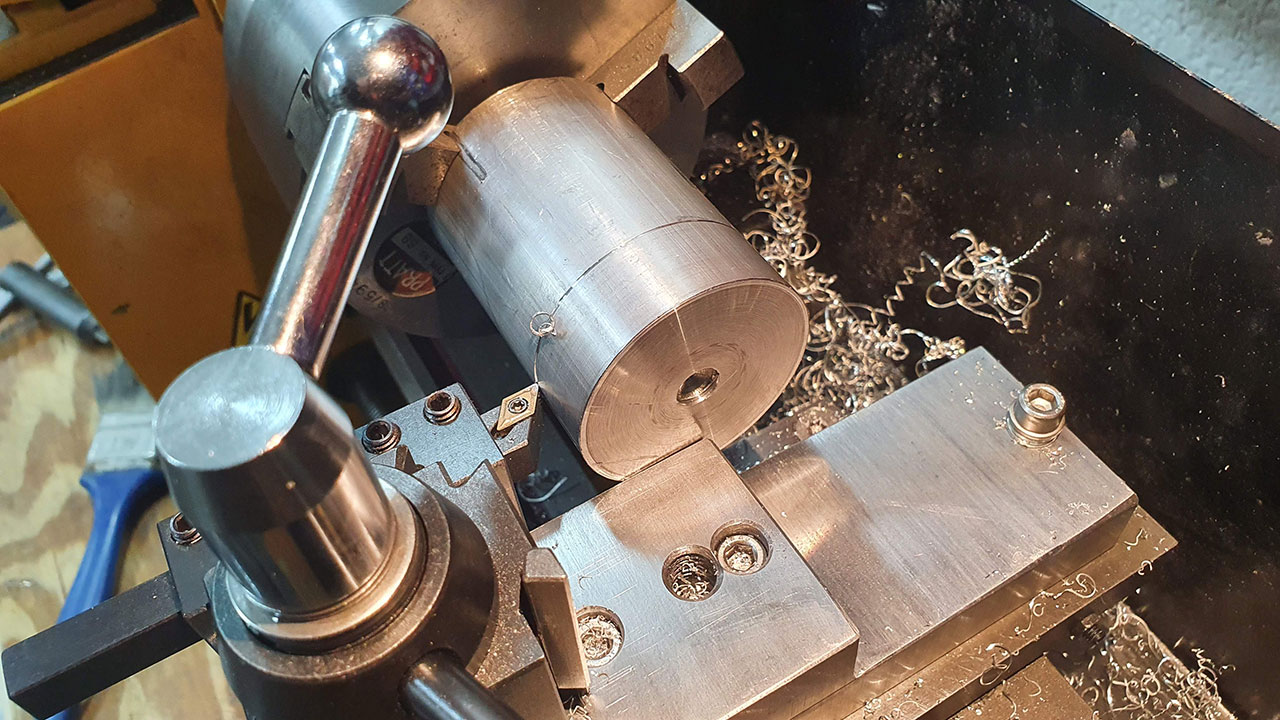 That's a bit of a design flaw.

In the meantime I used another block I'd made; which is just for holding the tool post in the "normal" position. The results are good - much reduced vibration and a near mirror finish cut: 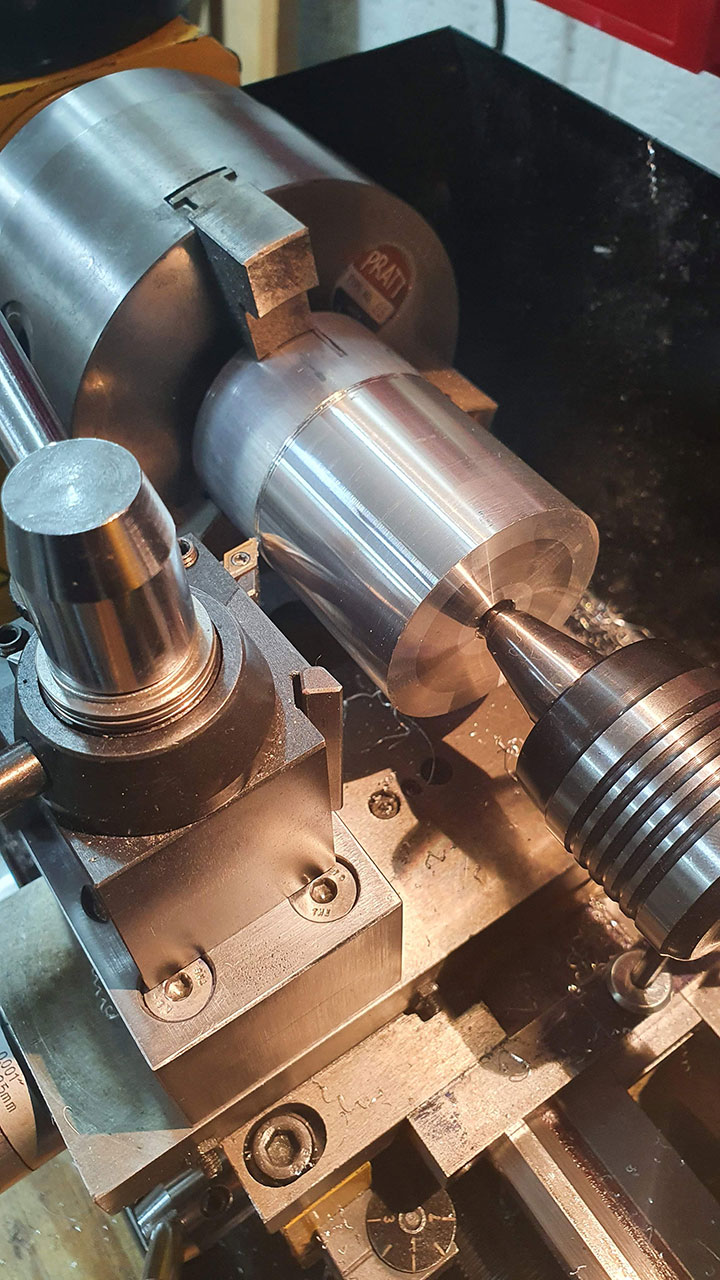 I'm in the process of modifying the longer block; such that it'll just be for putting the tool at a larger distance from the lathe center line - and hopefully not collide with the bottom of the work being turned.
N

not an error, a design feature. intended for "bumping" a work piece square to the to cross slide.
S

novocaine said:
not an error, a design feature. intended for "bumping" a work piece square to the to cross slide.
Click to expand...

I can tell you that I definitely found the flaw with a "bumping". Followed by a bit of swearing
T

I don't think I've seen a video from Stefan on this subject! Plenty of his other videos though. Rather long, but often some great dry humour.

You're welcome - the studs and shim mod is from one of Steve Jordan's videos (though I didn't go as far as he has with the rear side of the carriage). The compound replacement is little more than a lump of steel, so I can't really take any "design" credit.

I have done a modified version of the longer block, but I'll check if it actually works before posting any photos.
S

I modified the "long" toolpost mount; having hacked down the upper 20mm thick block, I bolted it back to the base block, shifted off to the left: 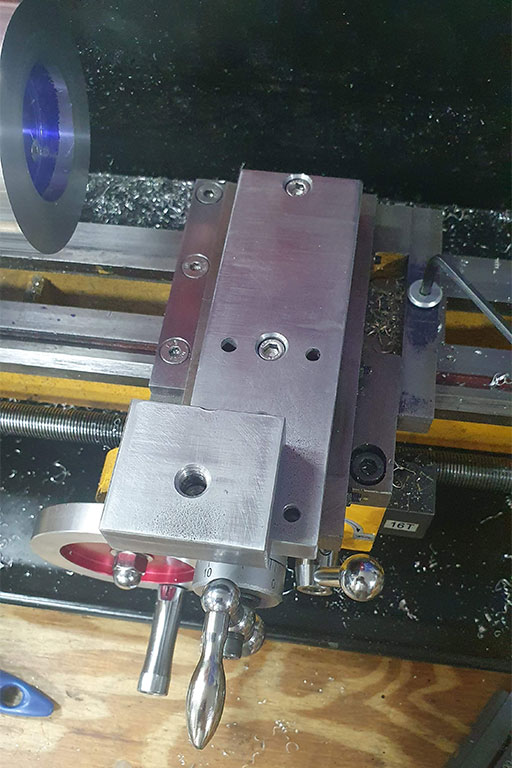 It seems to work pretty well. The larger disc on the lathe shown below is just over 80mm in diameter - meaning I've got ~110mm of diameter capacity whilst still being able to use a parting off tool. I get about 30mm of depth before the stock on the lathe hits the 20mm base block.

I may put a boring bar on the headstock at some point and machine out some of the thickness of the left side of the 20mm base block; such that I'd probably be able to get ~90mm diameter stock a bit further over the lathe carriage (i.e. maybe access 40mm to 50mm depth of 90mm diameter stock)- if that makes sense.

I have pushed this setup a fair bit - using a form tool on the aluminium below to cut pulley grooves, and it held up OK. 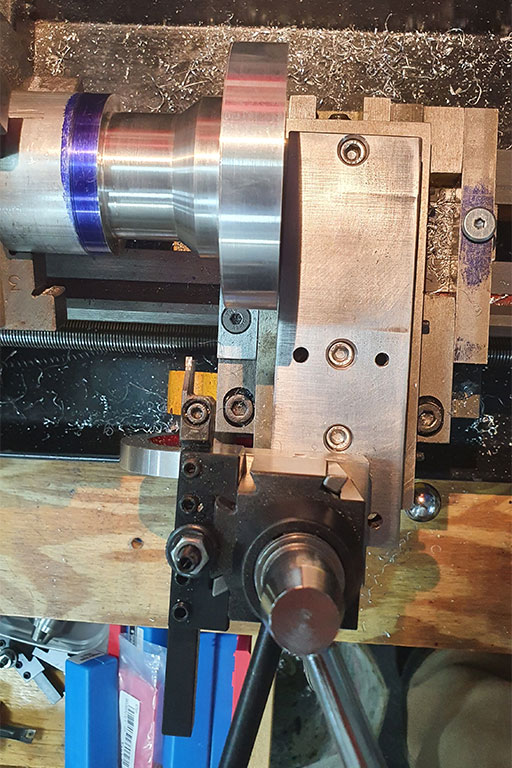 I
Cutting accurately with a chop-saw