I recently purchased a Kity 613 as my first bandsaw. I've been giving it a tidy up before use and wanted to change the rear roller bearing. Though mine looks different to any other Kity 613 photos I've seen.

I seem to have 3 side rollers with one being used for the rear roller bearing. I assume this isn't how it should have been?

I've already ordered some new bearings 6200-2RSH SKF that are on the way but assume I now need to source a different bolt?

Please can someone confirm this for me and where I might be able to source a replacement part? 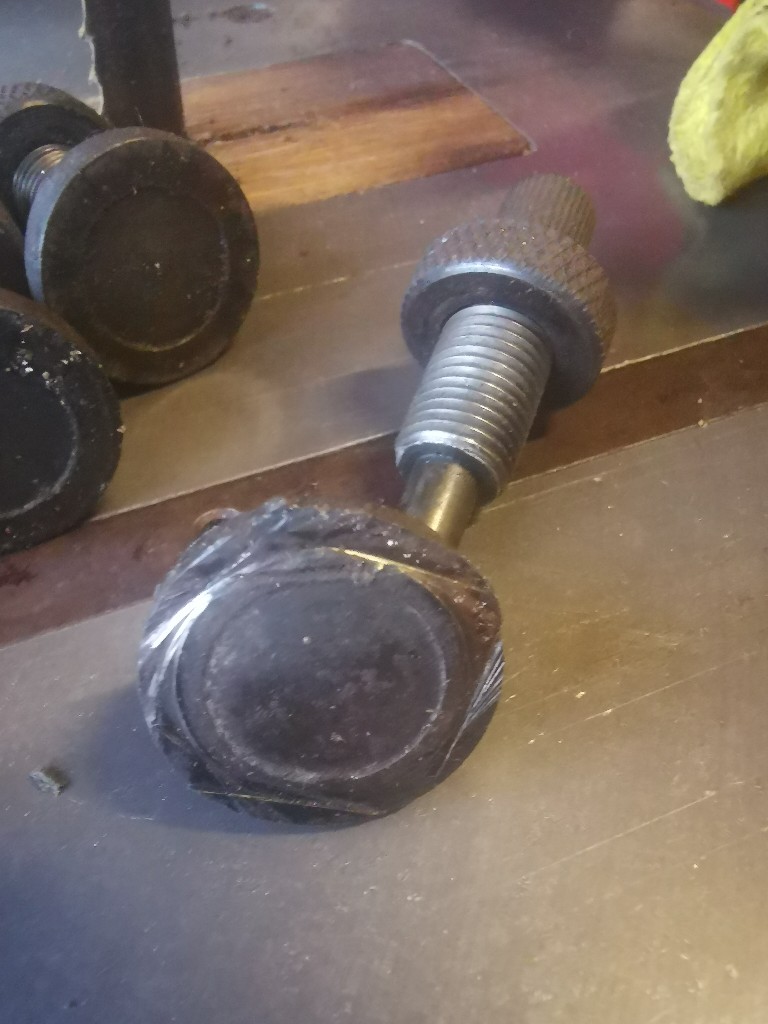 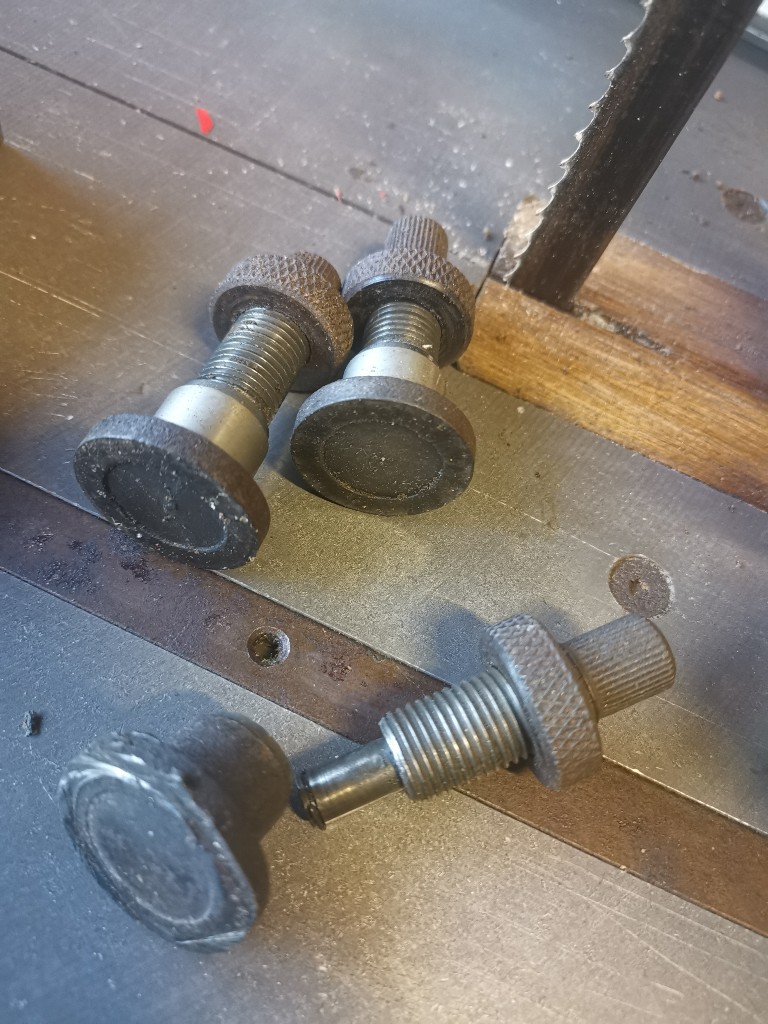 James,
You will probably find that you have a replacement set of bearings installed which were an improvement on 'cool blocks'. I installed a set on my 613 a few years ago, I think mine were sourced through Axminster. They still do something similar:
https://www.axminster.co.uk/bandsaw-bla ... ade-340889

I am sure they were not the only company to offer this upgrade.

PS. I probably have the originals in a box somewhere.
J

Much appreciated for the reply Andy.

I'd really like if it was upgraded but pretty sure its standard albeit Kity's later design over cool blocks.

I say this as the design of the upper side rollers face the wrong way to the blade side. Aftermarket looks to be different and how I'd expect it to be. The lower guide is still on blocks.

Mine looks the same is this but the rear bearing is the same as the side ones. 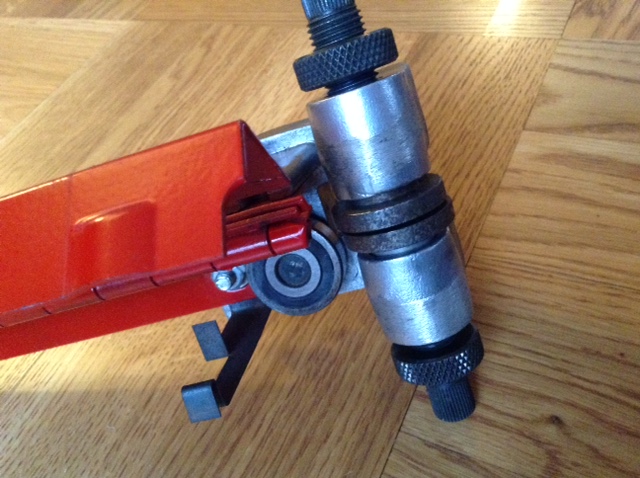 I think I just need to order one of these:

A tad pricey at 40 euros and now you mention it I'd consider upgrading the upper and lower guides if something is available.

The unit shown is the same as is fitted to the rear of the upper guide of my Kity 613. My 613 is I believe in original condition and has cool blocks as side guides. I have used Probois for parts and while they aren’t cheap I have found them reliable and efficient.

Thanks for the reply Ian.

Apologies when you say the unit is the same are you referring to the item I've removed or the item I've shown on the probois site? 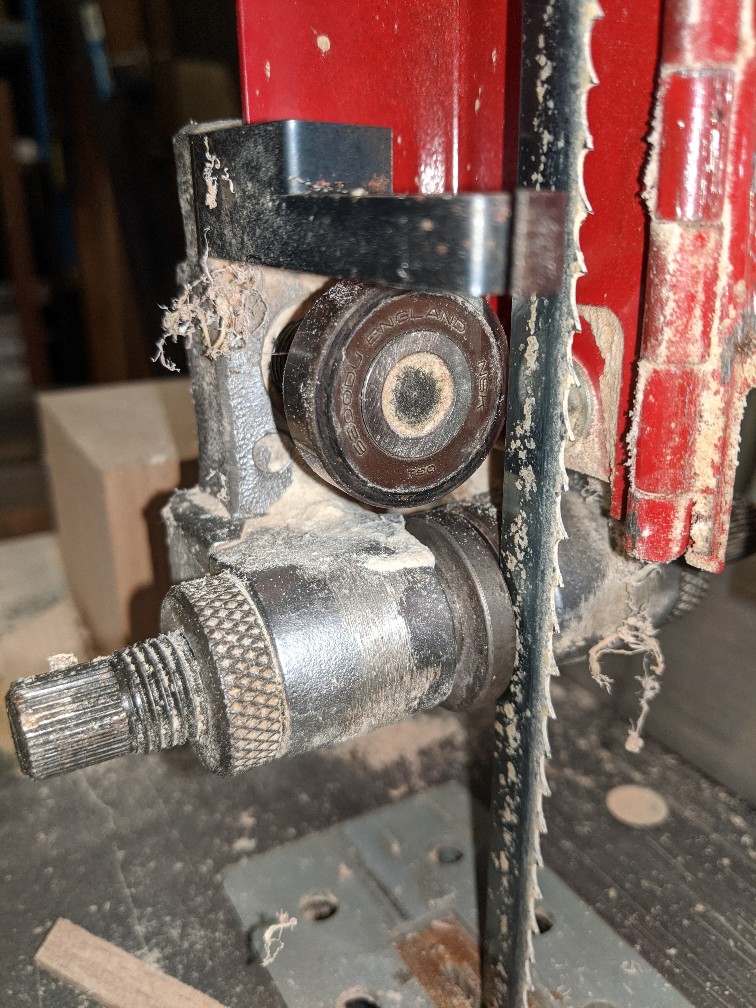 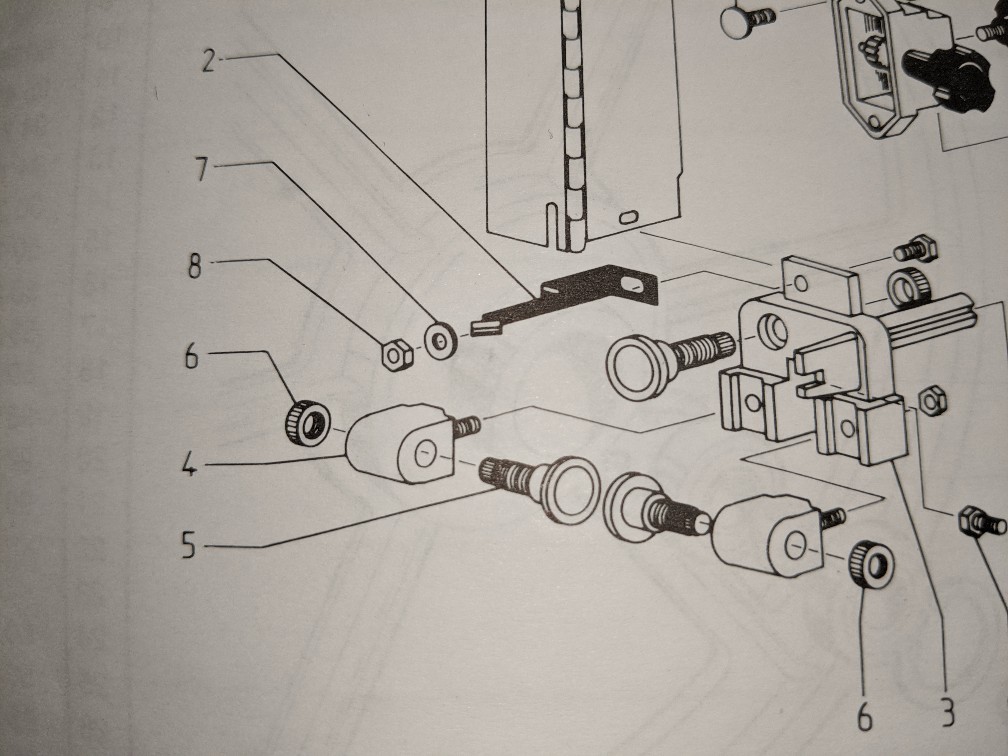 This is a bit of a strange one. The side upper guides on my 613 are the same as yours but the rear guide is a bearing.
Looking in the parts list it shows all 3 upper bearings being the same and that is what you have got.

James, apologies for the confusion. What I should have said was that the rear guide on mine is the same as that shown in the Probois photo.

Thank you powertools that's a great help. How strange! I expected the parts list to be as your photo.

So it does seem what I had was at least supplied like this from new at some point.

Thank you too Ian. I've sent an email off to Probois enquiring.
P

I would like to say I am pleased to help but all I have done is muddy the waters .
I think that in their latter years Kity became the British Leyland of woodworking machines in that they tried to keep up with things trying to bring out new models while using up the parts from previous models.
We have one poster who says his 613 has wooden top guides that is clearly from a 612, you have the discs and from my parts list is what a 613 should come with and my 613 came with a bearing at the rear of the top guide but my parts list does not show that.
Please keep this thread updated to let us know how you have got on.
I

[/url]http://[/img]My 613 is shown as being made in 1988 and as you can see was fitted with cool blocks as side guides and a bearing as the rear guide. The manufacturers instructions that I have show the cool blocks as being OEM at this time.

I was aware Kity had the early 613 with cool blocks and then later revised to the roller and bearing design. I don't think there was any noticeable improvement in cutting from what I read.

It certainly does sound like Kity were raiding the parts bin to use up what they had left.

I have looked at Axminster aftermarket guides and I think these would take some effort to fit. Haven't found anything that is a simple swap over.

I'm pretty sure I'll try and go down the route of new bolt with 6200 bearing.

I'll keep you updated and thank you for the information and photos.
I

I came to the Kity after using a small Record bandsaw and was initially concerned that the cool blocks were out of date and would be ineffective. My concerns proved unfounded and I think they have some advantages over metal guides. I also bought a DVD from Steve Maskery in which he shows what the guides are meant to do, how to set them up and how when properly set up and used sensibly you can cut without guides. There is similar information on YouTube (with lots of nonsense as well) at no cost, but I would recommend his videos to any new users of the bandsaw as I found them very helpful.

My original cool blocks eventually wore out. I made new ones from hardwood, works just as well.

My 613 is second hand so I can't be sure what its factory set up was. But when I bought it it had a rear bearing and wooden side blocks. Upper and lower both the same. I changed the blocks to lignam vitae. Its currently in storage but I've always been very happy with the arrangement. I also have a larger bandsaw with all bearings. I'm happy with that set up as well. I plan to change neither.

Hi, I'll just chip in this thought. I think you will find other bandsaws out there that are supplied new from the factory like yours. Whether Kity or not I don't know, but there's nothing essentially wrong with the principle except that the disc, which would have been hardened, has become stiff, and unable to spin freely has worn unevenly.
The bearing in my 613 (the photo you used for comparison) is offset relative to the blade. Odds are it is on a standard metric threaded bolt of some size. If the offset is enough, I would simply source a bolt (maybe a socket headed one) a few washers and nuts, and then buy a bearing with an inside diameter to fit the bolt and an outside diameter about the same as mine. It's not critical. Just thread everything together and either use a few washers if the gap is small or a washer and nut if there's room to grip the centre of the bearing.
I've done this with 100% sucess refurbing a Startrite bandsaw that had a simple metal rod with a hard meehanite end as the rear guide. The principle there was simply a small hard metal disc behind the back edge of the blade to stop it moving too far backward under pressure. These last for ages but eventually wear out. A bolt from the scrap bin and an SKF bearing for a couple of pounds workd a treat but will need replacing more often thatn the original hardened part.

Having been out to measure the threads on the guides, the major threads on the guides that run through the castings and that the locking rings go around are M14x1.5mm pitch (M14 fine as opposed to a standard M14 which is the coarse aka 2.0mm pitch). By the time you add the width of a head, that may be too fat for my bodge :-(
J

Thank you Sideways for looking into the possibility of a viable bodge and also for the excellent informative maintenance thread on the 613. I have referenced this several times and obviously where I nabbed the photo of the upper guide.
J

Probois have come back to me and probably lost in translation. They have supplied me a link to all Kity 613 spares they carry without answering my particular questions.

The part I think would work is coming out at 50 quid with delivery. I shall explore other options first!
J

Well I decided not to waste any more time and treat the old girl. £52 inc delivery!! :shock: but its done 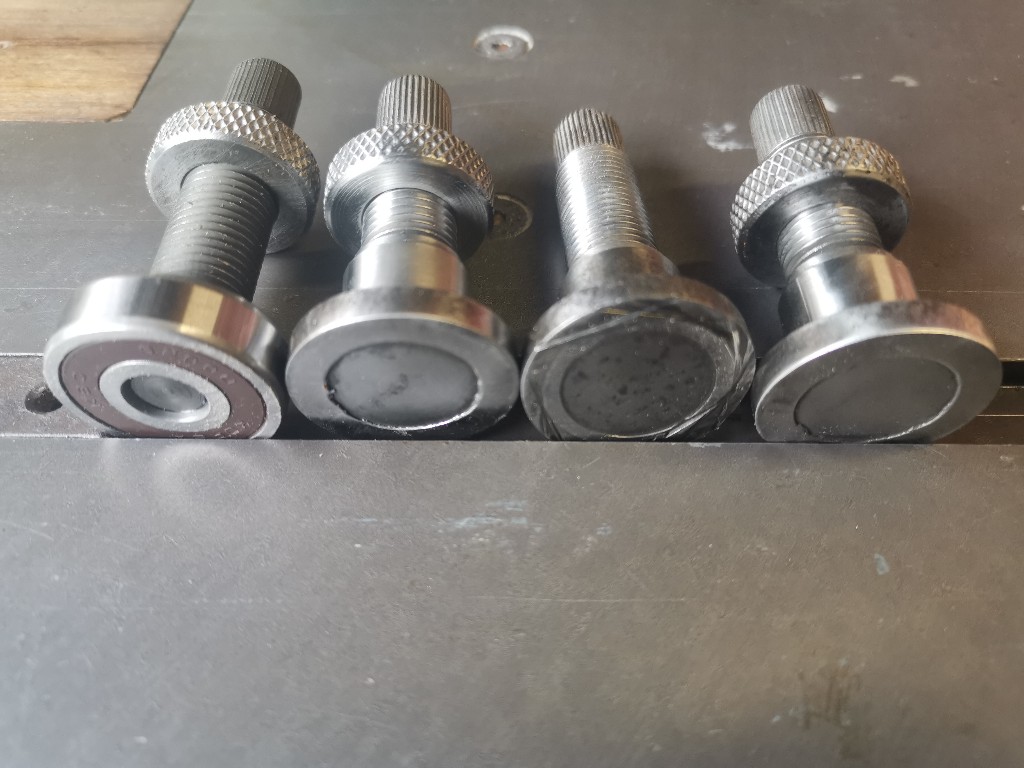 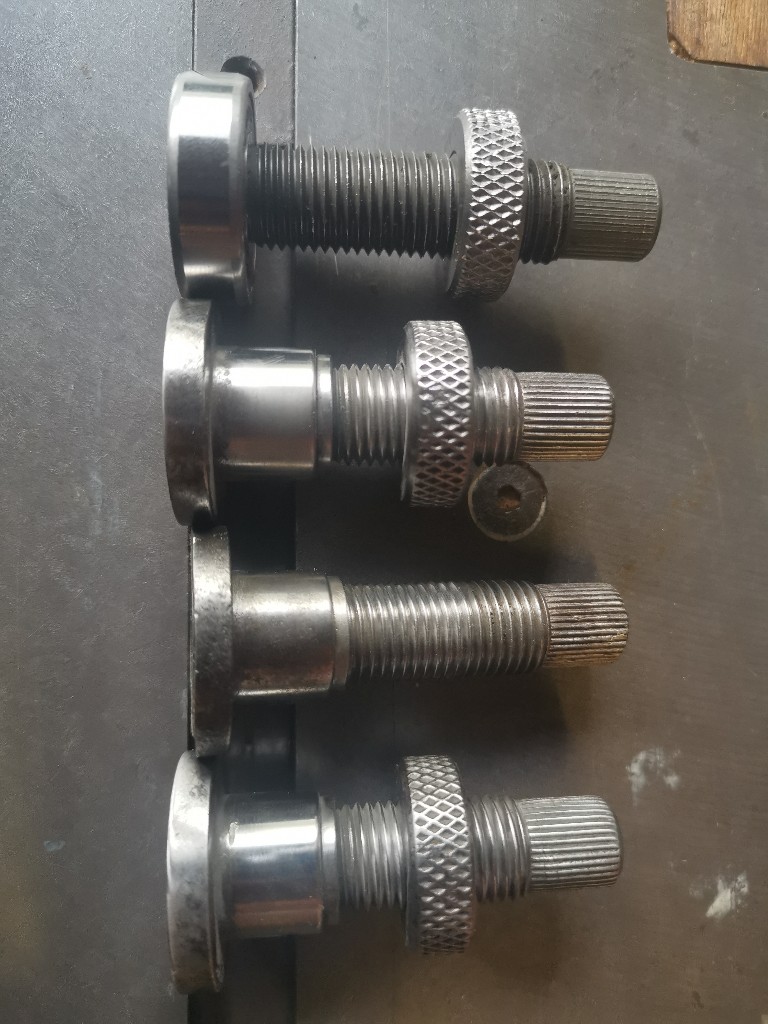 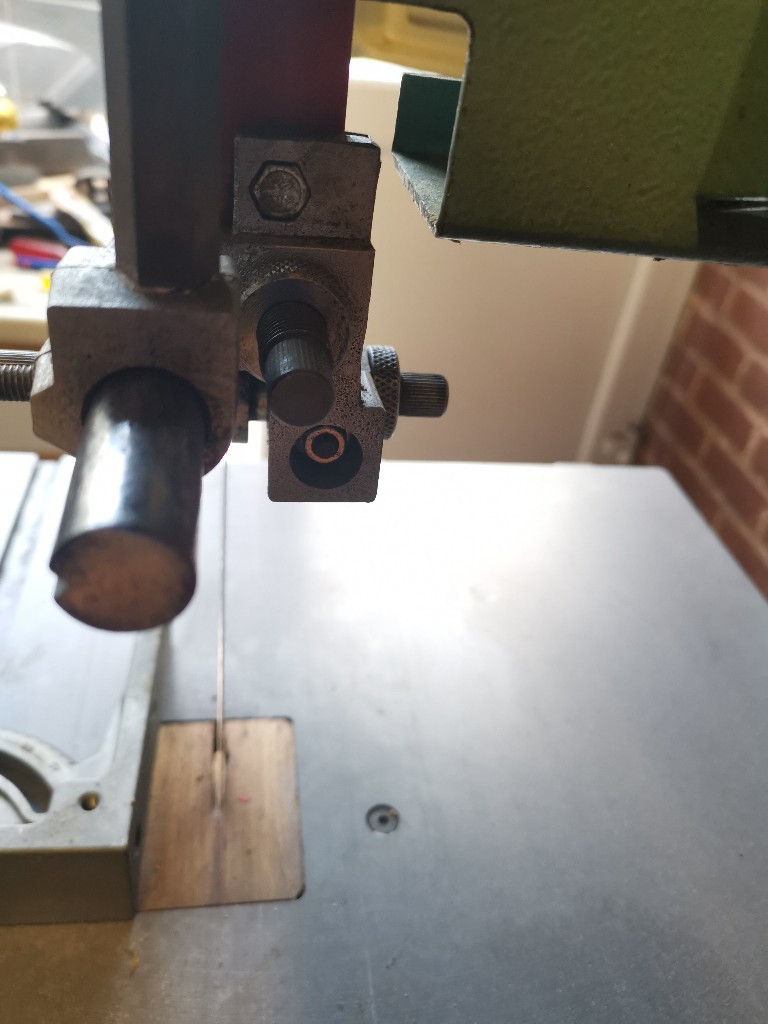 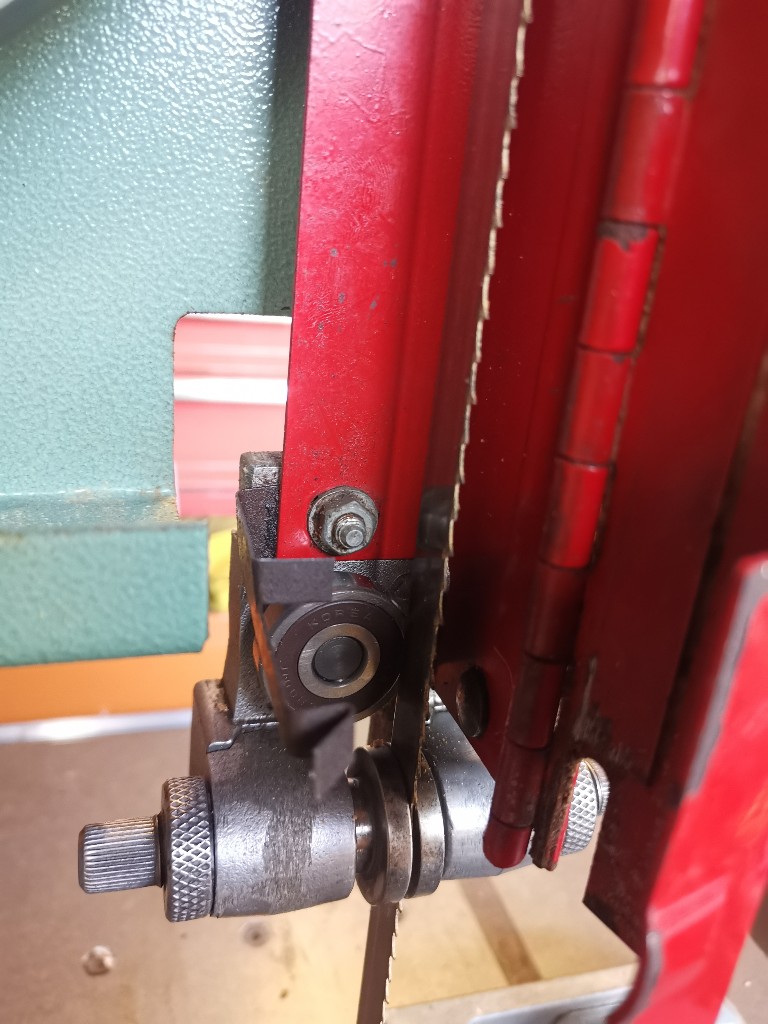 Aieee ! I'll assume that was just the quick setup photo. The side guides must be set further back so that their front edge is about level with the gullets between the teeth. You don't want the teeth edges cutting into your new guides, the guides squeezing the set out of the teeth, or the guides set wide around the set of the teeth so they don't support the side of the blade properly. Set everything so there's the thickness of a piece of paper between each guide and the surface it's intended to support. When free running, the guides should not touch the blade.
Also, don't forget to track the blade on the bandsaw wheels so the set of the teeth are just hanging off the front edge of the tyre. That's the proper position for flat tyres like the 613 has fitted.

When you are setting up the tracking to get the blade at the right position on the tyres, pull all the guides right back out of the way, only when the tracking is right do you bring the guides in to just a feather away from the blade.
J

Thanks Sideways! I really appreciate the information.

Haven't run the machine yet but was going to have a read up on setting the guide up properly. That's a huge help with what you've written.

Getting the blade to sit on the edge of the tyre wasn't too bad to do.

Also need new blades for it as the one that's on it has done an unknown amount of cutting in its previous ownership.

Think changing the table bolts will be a good idea too. They don't look to be in a good state.
You must log in or register to reply here.