How long does wood from a dead tree take to dry

Not sure if this is the right place to ask this question.
There is a very large chestnut tree on my local golf course which fell over about 4 years ago and is badly rotting at the exposed base. I have cut some burrs from it - some of them were just rotten but some looked ok. Anyway l have cut one of the larger limbs off and the wood is sound.
My question is - will this wood season quicker than 'green wood' - its been down for years do will this aid seasoning.
Also, is there any difference in the way l should care for the cut wood ( l have just sealed the raw ends).
The head greenkeeper has said l can help myself to as much as l want - but don't want to cut back all of the nettles and dodge the wasp nest if its no good!
Thanks
Patrick

The rule of thumb for planked wood is 1 year per 1 inch of thickness for air drying down to around 18% if outside and under a weather cover.

Croyboy":2jxgysii said:
but don't want to cut back all of the nettles and dodge the wasp nest if its no good!
Click to expand...

Dealing with wasps and nettles will be the least of your worries.
What will you end up with after it's cut - boards or rounds cut to a manageable size? Most saw mills will leave a trunk in the open for at least a year before milling it. However yours has been lying in less that ideal conditions for some time so expect quite a bit of rot, which raises the question - why was it felled in the first place?
As Droogs says, it's a year per inch if it's been cut into boards,although I would hope to get it down to about 14% with a decent airflow over it. If you're cutting into rounds it's a bit of a lottery and end protection becomes a factor to consider.
I've got this trunk of maple which was felled 8 weeks ago. 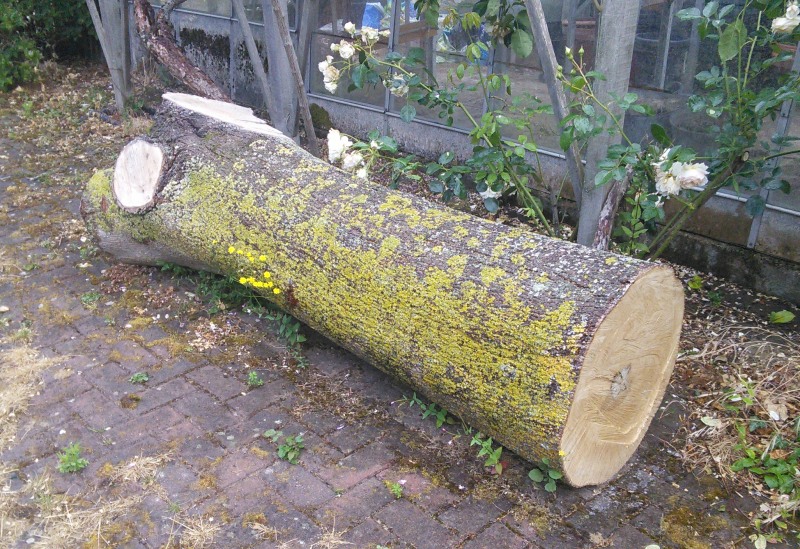 I've coated the end cuts with PVA and I may get it milled in the autumn. The biggest problem will be transport. If I've got to pay for transport or a mobile sawmill then I'll begin to question whether the whole operation is worthwhile.
Brian

Thanks for the replies.
My interest in the wood is for turning. It's a big tree and its not going anywhere!
My first thought was to cut off some of the smaller limbs ( about 12in dia) and seal them ready for making bowls at some time in the future.
The main trunk is about 4 feet across at its widest point - l was thinking it may be worth cutting some of it off that was spalted but not yet rotted. I could not cut through 4 feet but I could probably cut it to the middle and take the top half of the trunk ( like a fillet of fish).
I'm ok with a chainsaw and the tree is in an unused part of the golf course.
Is there any mileage in just leaving it where it is and cutting bits off as and when?
Hope this makes sense.
Patrick

Maybe worth investing in a chainsaw mill, I got mine and the saw for under £150, paid for itself in blanks with the first outing,

doesnt have to be a top of the line alaskan combined with a £1000 saw to make good useable boards, its hot dirty dusty work but if your game its very worth while.
C

I think standard practice would be to cut pieces from the tree a fair bit over the size you want to turn, cut in half through the pith, seal ends and stack so air can get to them out of the sunlight; then (assuming you don't want to wait til the logs are completely dry) cut to rounds (or whatever) and first turn as and when, then after storing in a bag and shavings/ newspaper for a few months second turn once the wood's dry enough.
Is it sweet chestnut or chestnut - I've not used the latter but people don't speak so highly of it for furniture, no idea about turning.
And yes, if it's been down 4 years it will have been seasoning that time. I'd imagine if you just leave it out and cut bits as and when it'll season less well (that depends on conditions I suppose) and more of it will decay?

Walnut Tree -Felled, is the branch wood good for turners?
2