This month saw the release of my 1st article in Woodturning. I thought you may appreciate some additional images. 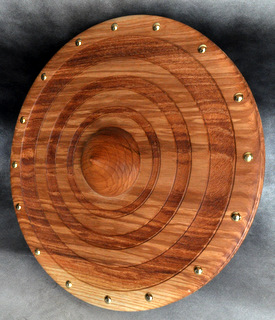 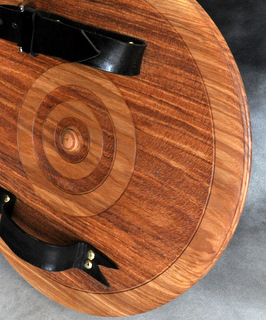 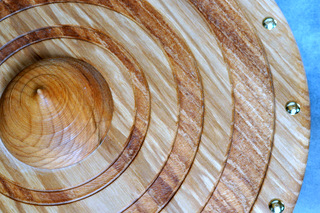 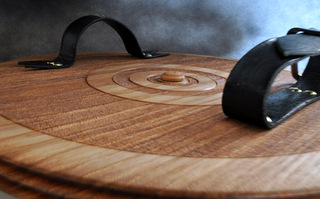 Many thanks for looking, all comments welcome.

impressive piece Lee, and I like the grain pattern.

I don't understand the small 'button' on the inside centre though - don't think my forearm would appreciate it for any length of time! It may have been explained in the article, but I haven't seen it.
S

Well done, Lee on a good article and an impressive piece. It looks better here on the forum than it does in the mag, where they seem to have featured the back more prominently.
Next up, a claymore? :lol:

Hey Jumps, the button was a simple cover for the mounting hole. Due to the slim nature of the blank. I could have used a flush button or plug but it doesn't interfere with your arm when it's in the belt.

Hi Ian, I do have plans to create a matching Claymore, that way when I go shopping I don't have to wait in line! LOL!

Thanks once again for our comments.

Thanks mate, a lot of hard work and effort as you know but a great achievement none-the-less.

Good luck with your own writing, look forward to it always.

well done on your first article. I as yet have not read it but will do when it drops through the door.

Thanks for your comments.

I'm sure it will be an enjoyable read, you may learn a few things too!

Congratulations on getting the wow cover Lee

I am so pleased for you that your work is getting the recognition it deserves as you have a lot to offer.

All the best in the future.

Thanks for the supportive comments.

The WOW cover is a nice honour.

Four people have commented on Lee's piece and acheivement.

Yep that's the UK supportive woodturning scene for you. No wonder the American's dance rings around us.

Can't understand Lee why so few have congratulated you as it is a beautiful project. I would have thought it being round and brown they would have loved it.

It is good to see you progressing keep it up.
G

Only just come across your post.
Well done mate. The Targe looks brilliant.
You've obviously done your homework on this ad produced something quite brilliant.

Congratulations on the WOW cover. Well deserved with this piece.

As Mark says, it's a bit surprising so few have congratulated you.
Hopefully more will drop in and do so.

Keep up the excellent work.
B

Lee, I havent passed any comment on your piece as yet as I have not recieved my copy of woodturning yet.

i have a long running row about not recieving my copy until after it goes on sale in the shops over here.

The pictures you posted seem to me to be on a different style than you have been doing up to now,they look to be very well turned and an excellent finish. If I had been asked what a Targe was I would not have had a clue.
Hence the wait for the Mag. to be sure I could have some Idea what I was talking about.
I also dont know anything about your WOW experience but I congratulate you on that.
Last year I congratulated Cornucopia on his making Wow and was informed that I was three weeks late.
Keep at what you like doing Lee I like looking at what you do.

Yep that's the UK supportive woodturning scene for you. No wonder the American's dance rings around us.

As I am snowed in at the mo, I can't get back to hospital for my final week in physio. What better way to pass some time but to get back onto the forum and see what's happening.

Normally, like most of us I think, I only tend to comment on pieces that move me in some way. However, as we are being given smacked handies for not commenting on this occasion, I have decided to throw in my two pennies worth.

As I'm sure Lee knows, I am a fan. I find his work interesting and stimulating. There is no doubting his growing technical skills.

This piece leaves me cold. :?

Perhaps because it is 'un-Lee-like'. It just feels like a repro. of some kind to me and there are quite enough of those out there. I appreciate the skill but find the object itself of no interest. It is no doubt very marketable. However, it seems to me to lack that 'Leeness' that makes his work so worthy of discussion.

Beauty is indeed in the eye of the beholder.

It is obvious that my comments have caused a stir and I apologise to you for taking the thread off track, but not for what I said, as I said it and the results are as they are. May be I looked at the situation incorrectly may be not, may be it was not important enough to even look into or comment about.

Some have agreed with me privately in relation to my comments and some not, with the latter telling me or indicating that my comments were rude and offensive, again this is for each to judge as individual readers of my comments and the situation. I just say what at times I feel, however I also have to take into account that this may offend and look at this as I am use to things of a much stronger nature than my comments to cause me offence, but again I should take this into account.

I did not indicate anywhere that people should say they like your piece if they did not.

This would be wrong, what I said at that particular time, feeling in the particular way that I did was in relation to how rude I personally thought it was for so many people not to congratulate or even "acknowledge" you Lee on your achievement of your first article in woodturning magazine. There had been enough views. Me calling it beautiful was my personal thoughts on your item and I did not infer nor did expect others to flood you with dishonest comments.

As has been mentioned in Nev's thread about the "community", to me as such other members of a "community" may have perhaps passed comment/congratulated or at least acknowledge you "as a member of the community" on this, and or the piece, whether they liked the piece or not was not the relevant point of what I said. So I commented as I did with the same distain to what I saw at a particular time in relation to the other community members, whether it be right or wrong and whether I read it rightly or wrongly.

Your piece here I thought was interesting in relation to this situation as an apperceptive piece of work.

I have not commented to each individual person in this thread or the others that have taken time to reply in the open forum, as each will have posted at the time relating to how they felt and thought in relation to what I said. If I did keep replying and quoting it just becomes a tennis match of possibly ever degrading personal comments as people in the heat of the moment at times say things that if sat having a drink together would not, so I felt it counterproductive to do so or to comment until now.

It is possible with comments such as mine for a person to be wholly judged on just a few sentences, especially if the reader feels defensive in some way or offended about them, I know I fall into this at times. If this is the case then I cannot do anything about this but will think about this in the future as to if I will comment or not and how.

So all the best with each and all's turning, I can tell you that I will not offer any form of comment that may or may not be possibly offensive in this forum again, I would not want to be destructive to those that want to learn/progress.

Finally everyone has just as much right to comment as to what they do or do not like of a piece, we all decide if we like something when we go to buy it at the shops and we do not have to be art critics to do this or be qualified, it is our own thoughts, others can agree or not. Just because of a perception of where I may or may not be, does not make me right, wrong or outside the realm of imperfection, or all knowing, if only !!.

"Opinions are formed in a process of "open" discussion and public debate, and where no opportunity for the forming of opinions exists, there may be moods -- moods of the masses and moods of individuals, the latter no less fickle and unreliable than the former -- but no opinion." - Hannah Arendt

Congratulations one last time Lee on your achievement.

"At what point does someone's appraisal of anothers work cause so much offence, to so many, that the individual feels they must remove themselves from the community that has welcomed everything they have to offer BUT - "without equal merit!"

The 'Apperceptive' piece referred to in this thread is a simple illustration of how we project our own thoughts and feelings onto a piece. It is exactly the same as anyone else's work in that it has been crafted from wood and displayed in a way of my choosing. However, as a person rehearsed in the subject of Psychology, I have had a lifelong interest in how things 'Affect' us!

Unfortunately, their can be circumstances where an individual can mistake an item of production and attempt to judge it's creator on a personal level. This cannot be done within the confines of a small, insignificant community such as this. The psycholynguistics of such a 'virtual' environement are mind bogling to say the least.

We can attempt to understand the behaviour from a Sociological perspective, but I do believe that would not leed to any further developments on the main subject of this thread.

When all analysis has been conducted, both introspectively and existensially, one thing can be confidently stated:

I dont think the people on here are insignifcant .They have helped in many ways to help people begin their woodturning skills. You have been one of the many who asked questions and were given answers wheather good or not so good for your use or not as the case maybe.
Has the fact that you have been PUBLISHED give you the right to insult me or others if they take the same view as I do of your post. I am writing this from a personal view. I find your closing sentence to be very distasteful .
I am not overlooking the role that Mark Sanger had to play in this either.

You should be careful of your use of the English language in this electronic environment, I said the 'community' was small and insignificant NOT that the 'people' where, as you put it.

I have met some of the best people I know on this forum, as individual 'people' are often different from groups (read[community]).

Yet again you have provided a single use of the type of response that makes me feel unwelcome. Yet again we see the individual expression of a person quickly stamped on becuase YOU couldn't be bothered to read AND understand common, everyday language!

You would rather interperet the words of another in a way of your choosing, irrespective of being understood, and attack them on that basis.