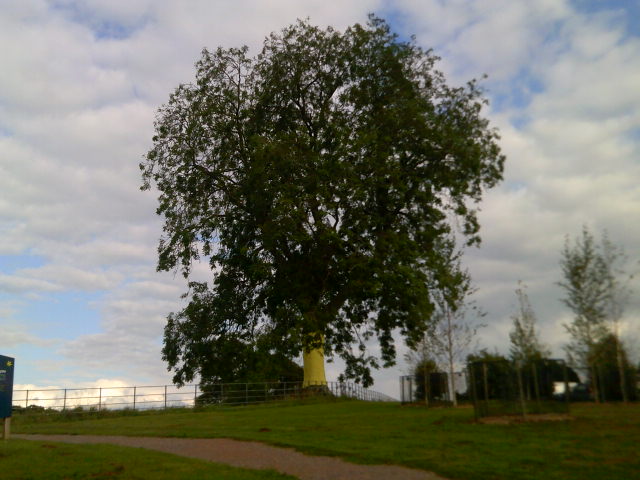 At Westonbirt they've just marked all the Fraxinus species with yellow bands so they stand out and make people aware of the problem - this one is just outside the entrance. They are a little uncertain how to proceed but it seems they will all be felled, as besides all else apparently they become brittle and therefore more dangerous to fell - obviously they have to be felled carefully and not just dropped because of the damage done to adjacent trees. There is one fairly large one lying with the small branches removed with explanatory information on it. Such a shame, such beautiful trees.
.....................................................
Westonbirt is absolutely stunning. :shock: I might have been more awestruck than some as living in W. Cornwall we have very, very few really large trees - the wind gets them first. £10 admission or £39 per annum - anyone who lives within reaching distance should go. They're developing a woodworking area where they hope to show the end products of timber they can trace back to seed, and are/were running a chair making course - it'll be interesting to see how that develops.
On the first weekend of the month they do a tour of the propagation unit in the mornings - I did this one as well as a guided tour of one of the woods in the afternoon - the tours are free, the guides are volunteers and are very knowledgeable.
A wonderful place, I shall do the 400 mile round trip again. And again.

Agreed!
Glad you made it and had such a good day. Just to hammer home how amazing some of their trees are, here are photos of some of my favourites, which some people might have seen before.

Phil, will you be coming back for the autumn colours?

No, I won't go back this year. I was lucky, I got there before the autumn rush and still saw some of the colour. Spring, hopefully.

Yes these infectious 'diseases' cause a devastating change and loss to the visual environment. Never envisioned that I would see such as the Elms virtually disappear from the landscape, the thought of all the Ash going the same way is very saddening.

October can be very colourful, being a Westonbirt friends member & reasonably close means we can spend many an afternoon comparing the seasons.

The above and many more images are in a thread from October 2009.
B

I wonder how much of this is due to a 'shrinking world', as international trade intensifies and insects find their way in? Or will they insist on blaming Global warming?

Benchwayze":2gg7spcc said:
I wonder how much of this is due to a 'shrinking world', as international trade intensifies and insects find their way in? Or will they insist on blaming Global warming?
Click to expand...

Wish we had the strict controls that New Zealand and Australia impose on imported products likely to transfer undesirable pathogens, I know our close proximity to the European and Scandinavian land mass & the fact we are on several large bird migration itineraries does not help.
At least stricter Import checks would help avoid wholesale shipment of infected stock and consumables that can, and have, arrive via the container load.
T

If only it were only Ash and Elm. But there are issues with Horse Chestnut and Oak as well.

I agree about stricter checks on imports. And the question must be asked as to why we have been importing Ash saplings from Holland etc when Ash grows so prolifically almost everywhere!!

Going into Oz I got pulled up for an orange in my luggage. My wife had picked up a bag she didn't realise was rubbish and put it in my bag. They got it with an xray machine. I said well, you've found one, you'd better go through the bag for another as there were two. She duly emptied everything out and found the other, which had obviously got behind something that hid it. Going into NZ the sniffer dogs were everywhere - I thought initially they were drug dogs but no, they were after fruit and veg.
I do wonder about things like importing ash saplings -why on earth do we import stuff that can be easily grown here? It's not as if the Netherlands is a cheap labour third world Country.

treeturner123":1aa9qcob said:
Hi All
If only it were only Ash and Elm. But there are issues with Horse Chestnut and Oak as well.
Click to expand...

And larch, and olive and kauri elsewhere.
C

Apparently it can spread without importing ash saplings:
'[...] on the 7 November, we published an evidence summary compiled over the past week by a group of experts convened by Defra’s Chief Scientific Adviser, Professor Ian Boyd. The scientific advice from that group is that where the disease is present in the natural environment, this is likely to be due to spores blown in on the wind from continental Europe.'
https://www.gov.uk/government/news/writ ... ee-dieback

Certainly. But the beginning is a good place to start.
T

According to one theory I have heard it was introduced to Europe when Ash saw logs were imported from Korea by a Polish furniture factory and the spores were on the bark. That would support the global trade idea but is it likely whole logs would be preferred to processed timber?
We've had to take out several hundred young trees in a plantation here and several mature specimens look like they'll be coming down this winter :evil:
L

I frequently drive past a tree supplier.
They call themselves a nursery on the internet, but in reality are a fast turn round warehouse.
And often there is a foreign artic unloading, I assume all of their stock comes from abroad.

Why the hell we cannot grow our own trees and shrubs is beyond my understanding.

Tris":5uywgdpi said:
According to one theory I have heard it was introduced to Europe when Ash saw logs were imported from Korea by a Polish furniture factory and the spores were on the bark. That would support the global trade idea but is it likely whole logs would be preferred to processed timber?
We've had to take out several hundred young trees in a plantation here and several mature specimens look like they'll be coming down this winter :evil:
Click to expand...

I think it's not at all impossible that whole logs could be im/exported, but since the pathogen is spread by the tiniest particles, I guess it could just as esily be transmitted on wrought timber too. I think that increased demand for firewood to feed urban logburners and activities like flailing hedgerows are good new ways to spread disease around the place. I remember being fumigated - along with the whole plane cabin - before disembarking in Australia some decades ago.

On the plus side - I think that there is genetic diversity amongst the ash trees in the UK (which was not the case with elms which were very closely related to each other.) - we have it quite bad here in Sussex, but healthy trees stand along side poorly-looking ones - giving hope that some will survive. I'm not a fan of prophylactic felling, but obviously safety is important. Touch wood (pun intended) we have some elms getting to quite a good size in a hedgerow - which is very good news - I've never seen a mature elm tree (although I gather they have some very fine specimens in Australia, exported by Victorian-era pommies). I think that the beetles can only fly a certain distance so I'm hoping there are none near enough.

Woody2Shoes":2c78lxk6 said:
... and activities like flailing hedgerows are good new ways to spread disease around the place. .
Click to expand...

As the mechanisation of hedge trimming and wood debris chipping evolved post c. 1950 My Father (who died in 1982) expressed reservations about the lack of pest and disease control involved with the practice for many years.

It was with very mixed feelings, having spent many autumn/winter/springs carrying out the back breaking tasks of hedge trimming and ditching by hand, the advent of the tractor mounted equipement was a relief, but he often commented that the loss of the winter warming hedge cutting debris bonfires that naturally sterilised any suspect thinning's could pose a risk. Orchard pruning's of suspect wood were always burnt asap rather than chipped and left in place. I can't help thinking many of the old stile established orchards and wood plantations were and are not helped by this lack of basic housekeeping.

And another pest - the box tree moth. I've just read in I that gardeners in N.T. estates are trying to find ways of encouraging jackdaws as they have been found to eat the caterpillars.

Had a Cotswold walk about 5 miles north of Wesonbirt yesterday. I was aghast at the sight of damaged and dead ash trees in the area. I was with my arborialist son-in-law who was pointing out all the features. It is thought that this particular infestation was caused by a nearby area that was replanted with infected saplings imported from a continental supplier a few years ago. Other species in the replanting are progressing well. Here are a couple of shots taken on the walk:- 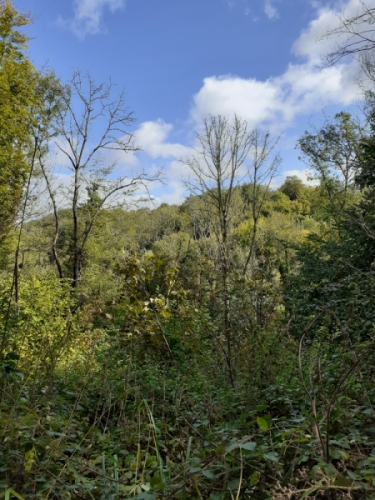 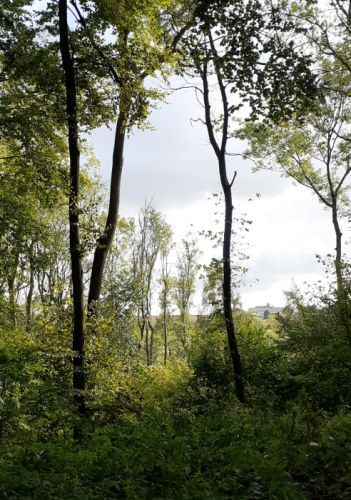 The first signs are a thinning of the crown leaf density. If the tree survives the first winter after infection the crown sprouts a large number of stubby twigs which come into leaf but don't survive much longer. As the tree dies back the timber becomes brittle which makes it vulnerable to winds and makes felling a hazardous business.
There is consequential damage which we saw examples of yesterday. As the root decays a fungus goes wild feeding on the rot. This in turn attacks the roots of other nearby species such as hazel and beech saplings. It is thought that a normal balance will be resumed once the ash has rotted completely.
The other damage we saw was from squirrels eating beech tree bark high up in the canopy resulting in some quite large branches being snapped off in recent high winds.
My son-in-law has been involved in risk assessment of infected ash trees falling on highways and other places with public access. This work has been done mainly for local authorities but thousands of ordinary landowners will carry the same burden and responsibility. The cost is going to be huge.

All in all a sobering Sunday walk
Brian