Buying a cyclone, where from?

Long time no chat, for various reasons my workshop has taken a back seat in my life, but now im back to using it again. I have no dust extraction and need to get some installed. Ive bought a SIP 3hp twin bag jobby and was considering adapting it to a cyclone type extractor. Cyclone central dont seem to be trading any longer (or at least the link doesnt work thats in the sticky on the subject)

does anyone know of a uk manufacturer selling larger cyclones? should i even bother with the conversion at all?

any advice much appreciated.

I would not bother with a separate cyclone, If its one of these: https://www.machinemart.co.uk/p/sip-3hp ... ctor-230v/ the best thing you can do is to get pleated paper filters to replace the bag filters on the top of it, the one linked too above has a cyclone effect due to its side entry, the bottom bags will need to be replaced with plastic bags to make it work effectively.
M

Hi Thanks for taking the time to reply.

It's one of these

same thing just single set of bags, im not overly worried about the dust side of it because its going to be sited in a purpose built lean too and wont vent into my work space, why the plastic bag to make it work properly?

You only need the plastic bags if you fit the pleated paper filter.

I got one of the dustbin lid separator's on a 120 litre plastic drum, only the fine dust ends up in my extractor bag, best thing I ever did works a treat....

Since it is outside then using a cyclone isn't really necessary. The dust that leaks out doesn't matter unless you have neighbours close by. The downside is the heat loss if you use it a lot and anything picked up other than dust and shavings will hit the impeller. That only matters if big chunks get to it or metal that could spark. You will have the greatest amount of suction by not having a cyclone or separator as they both add to the resistance.

The advantage of a cyclone is it is more convenient to empty a collection drum/barrel rather than the bags. The impeller doesn't get hit by debris. And if is an efficient one you won't need the filters at all offsetting the resistance of the cyclone a little.

You could put the DC in the lean to now and then add the cyclone out there later if you find one or feel the need. There are plans for one on Bill Pentz's website along with a ton of other information about dust collection. It is one of the most efficient ones around and only has a couple inches of water column loss. That's at least half of what other separators can have. If you haven't made the lean to yet then consider making it tall enough (at least 8') to fit the cyclone later. http://billpentz.com/woodworking/cyclone/index.cfm

I got mine from Toolovation who import from the US - Rob

Inspector":2i4a5599 said:
The advantage of a cyclone is it is more convenient to empty a collection drum/barrel rather than the bags.
Pete
Click to expand...

Actually the opposite applies it's much more convenient and healthy to pick up a bag that is already full, than to empty a bin into a bag.

Blimey the big cyclones a sooo expensive, I think my separator was about 20 beer tokens......

Inspector":bq8v983x said:
The advantage of a cyclone is it is more convenient to empty a collection drum/barrel rather than the bags.
Pete
Click to expand...

Actually the opposite applies it's much more convenient and healthy to pick up a bag that is already full, than to empty a bin into a bag.
Click to expand...

It's very easy when the bag is incorporated in the collection drum. I'm rebuilding mine, which will include a larger cyclone and a collection bin that has an internal plastic bag holder for ease of emptying. Both sides of the bag will be at the same negative pressure and will be held in place with a metal grid so it doesn't inadvertently get sucked up through the cyclone.

woodbloke66":14ckl078 said:
I got mine from Toolovation who import from the US - Rob
Click to expand...

My dust collection system started out as a Bernardo DC 500E-400V system, and I tossed everything except the blower motor. I attached this to the Oneida steel SDD and built my own filter box for a pair of Wynn filters and dust pans. When I change out the SDD for the larger model, I'll keep everything from the motor to the filters intact fit the new cyclone and dust bin.

Here's an image of the current system. My air compressor fits nicely beneath the filters. 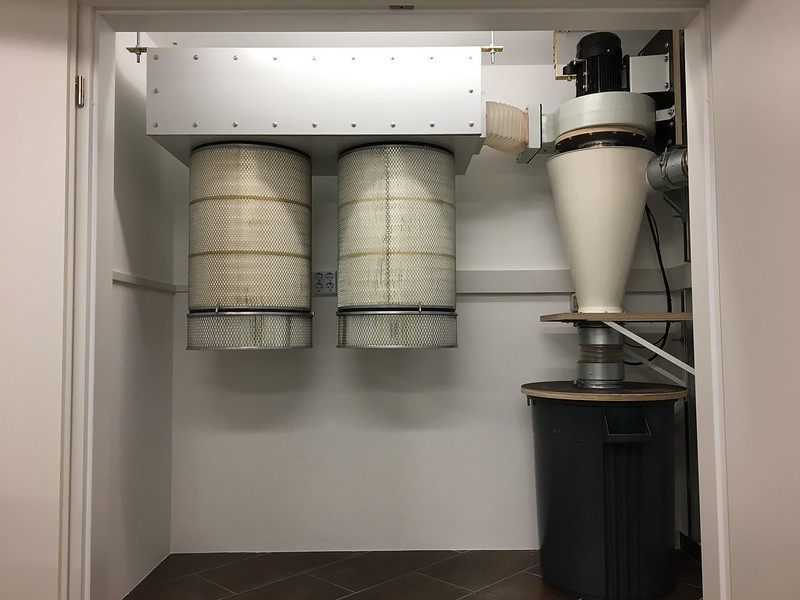 MikeJhn":3itn9yxv said:
Actually the opposite applies it's much more convenient and healthy to pick up a bag that is already full, than to empty a bin into a bag.
Click to expand...

Plastic bags perhaps, but his DC has 4 cloth bags so he would have to dump the cloth bags into something. If he puts plastic bags on the bottom he halves his airflow. Lets edit that to halves his filter area. He could spend hundreds on cartridges to make up the airflow change to plastic bags but does that make sense when he isn't recirculating the air? Doesn't to me but your milage may vary. :wink: If he made a Pentz cyclone he can ditch all filters and put a plastic bag in the bin as long as he puts a frame to hold the bag open, keeping it from getting sucked into the cyclone. Pull the frame out when the bag in the bin is full. He can do whatever makes the most sense and fits his budget.