But with a difference, how the Belgian stones are mined, and made.

Interesting but it looks to have been filmed a long time ago, can you still buy Belgian stones?
D

Cabinetman said:
Interesting but it looks to have been filmed a long time ago, can you still buy Belgian stones?
Click to expand...

Ardennes markets them, but they are far from cost effective. I didn't watch this video, but understand something like 7 different firms were offering belgian hones at one point, generally taken where the veins meet (blue on one side, yellow on the other). These are referred to as "natural combos" now and expensive.

I've had somewhere around 10 or 15 belgian stones, and the new types are OK, but on average do not measure up to vintage stones.

Separate comment, too - the older stones (and maybe the new) were graded for use - they come in a range of hardness and a range of fineness. If you're looking for a finish stone and you get a coarse one, it won't return an edge that you will like too much, but I'd be willing to bet that there are a lot of these still in use in continental europe as finishing stones.

So, why are they not cost effective now? Just my opinion, but there is a limited source and a huge market of internet readers, which means when they sell a stone as "select", it's their grading. I've had stones that were slow and not that fine (from ardennes), and a bout that I have now that's fast on slurry, and slow on water, which is a nice combination, but also a bit coarse. A small offcut "bout" #10 size is probably about $125 now. Full size stones are likely in the $300-$400 range (I haven't looked) if you're considering something bench stone sized and on average, they're not that fine, and would need to be used for a while with no slurry with a light touch to get a really fine edge.

They are sort of like arkansas stones, though, in that if you can use a surface on water only with light pressure, you can get an edge finer than the underlying particle size because the particles aren't aggressive like synthetic alumina.

They are also like many natural stones in that a few of them are real bangers and you put a tool to them or a razor and you have a finely honed razor or sharp tool. I think the variability adds to the hunt for a lot of folks. Out of the 10 or 15 that I had, mostly sold through razor avenues, two were actually really fine. when I honed tools on them with a bit heavier hand (something you would do that's practical as you won't be inclined to finish hone a tool for 100 strokes with light pressure), the edge wasn't as good as more common stones like a charn or fine arkansas stone.
D

by the way, my comment that both sides were natural stones on the combos, that's true. The blue is a slightly less abrasive version of the yellow and similar in fineness, maybe slightly less.

However, in the old days, when a natural combo wasn't made and there was a good layer of yellow, it would be glued to a nice blue stone so you functionally had the same thing.

These days, the stones I've seen are just yellow coticule on the yellow side, and the back side that the yellow is glued to is slate with no honing ability. The blues are sold as separate stones elsewhere. Without the backing, the stones are fairly unstable and can crack or propagate cracks that were unseen previously (so you don't often see a large pure yellow stone, and if someone is selling an "old coticule" that's all yellow, it could be something else much less flattering.

Last I heard, ardennes did sell some stones directly, especially some of the rarer finer stones that they have - so that gives you two avenues to think about :
1) if they have a truly great stone, it'll probably be pulled and kept for loyal customers who will pay the moon for unusual or exceedingly nice stones
2) the retailers have what's left

Older stones are around on ebay, but not often in large format. Wiser if experimenting to get one that's an older combo and see if you can live with it. Certainly there are continental european craftsmen brought up on them who won't use anything else (one of the cabinetmakers or masters of one of the Williamsburg shops decades ago used coticule finish stones and spit on them to use the, and the museum sourced the stones if others wanted to use them - 50 years ago, there were more sources and the cost of a natural combo was something like $10).

Cabinetman said:
Interesting but it looks to have been filmed a long time ago
Click to expand...

It has 1971 in the title, so maybe as old as many members here.
Kind of shows though, the simple nothing much changes life of these craftsmen. Probably find if you went there today little would have changed.
C

Except very few would have a fag permanently in their mouths as every single one did all the time, - it was really noticeable,

I had this rather beautiful Belgian Coticule stone until a few years ago when I gifted it to a friend who lives in Atlanta, Georgia... He loved it so much that he made this gorgeous box for it out of English Boxwood. 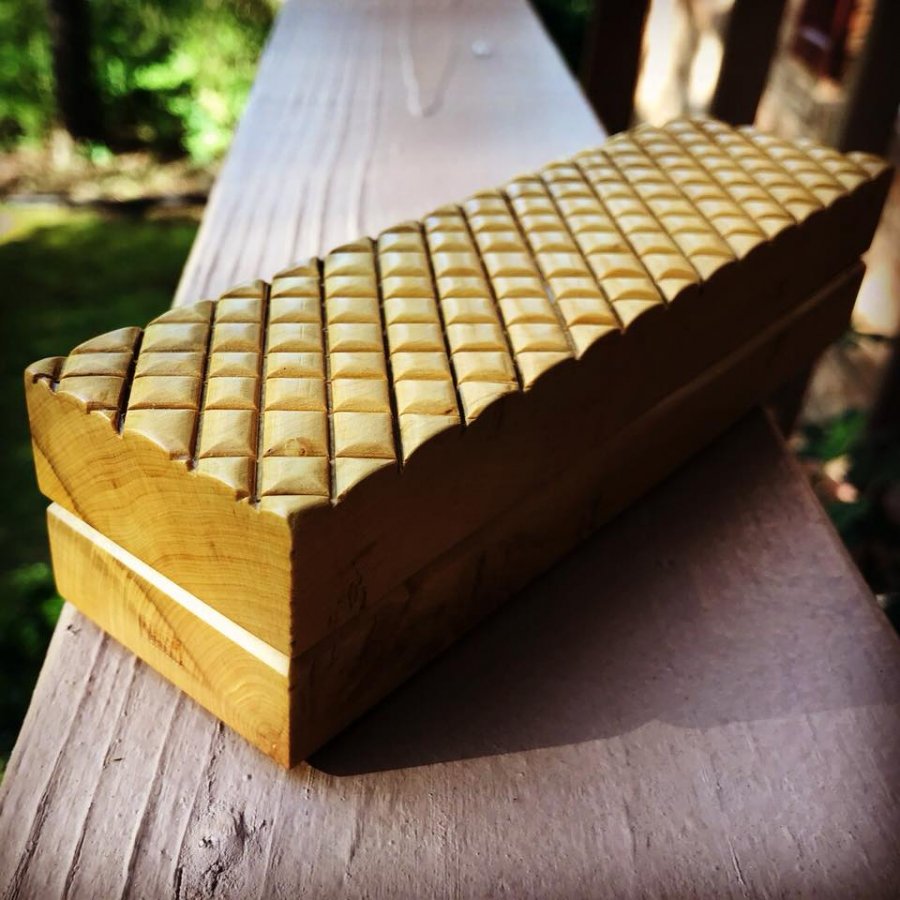 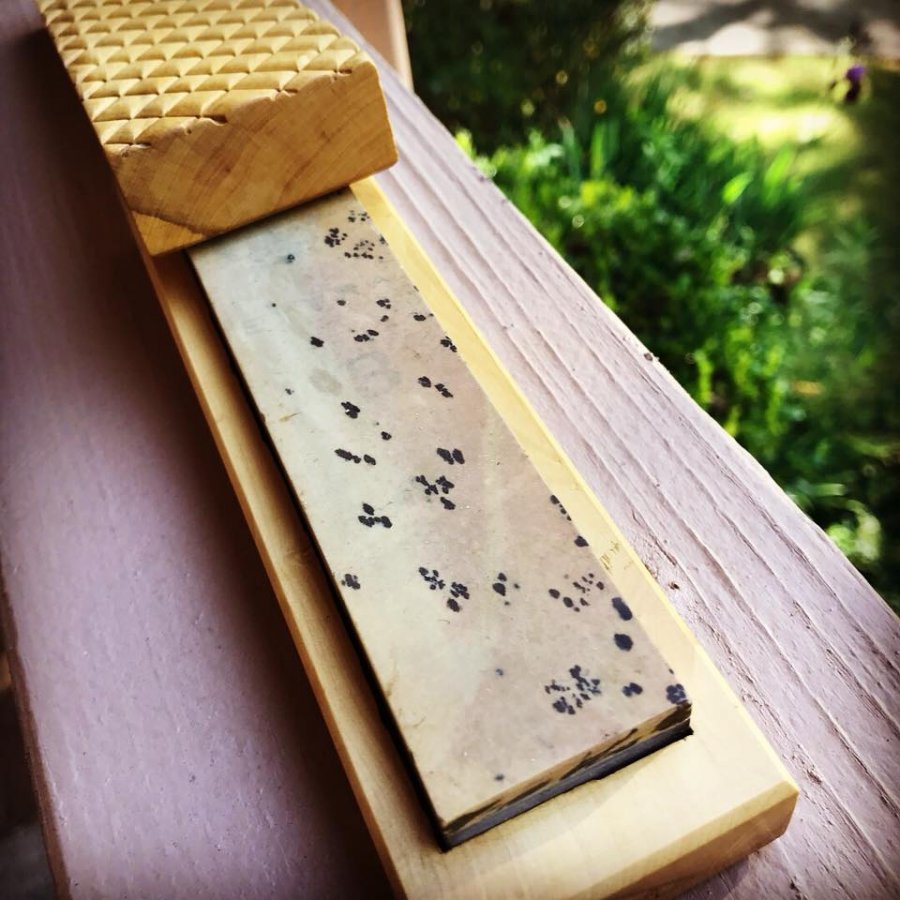 where did he get the box?!!? (as in the boxwood to make the box?). It's difficult to say the least to find uncracked boxwood that large now.

The coticules are so pretty, which is the reason that I've had a dozen or more despite only really getting a thrill out of a couple of the group).

D_W said:
where did he get the box?!!? (as in the boxwood to make the box?). It's difficult to say the least to find uncracked boxwood that large now.

The coticules are so pretty, which is the reason that I've had a dozen or more despite only really getting a thrill out of a couple of the group).
Click to expand...

I believe he buys his boxwood from a gentleman by the name of Hugh Crompton - see link below.
Hugh lives in England but he does export to buyers in the U.S.A

The best English boxwood is to be found… in Wales!! – EBTS UK

workshopted said:
I believe he buys his boxwood from a gentleman by the name of Hugh Crompton - see link below.
Hugh lives in England but he does export to buyers in the U.S.A

The best English boxwood is to be found… in Wales!! – EBTS UK