My initial intention was to make a thumb plane with a round back, similar to a Norris 32. But then I thought I might want to add a screw adjuster, and the thin side-wall material would not have been suitable to take the stud for the thumb wheel, so I scotched the bent side idea and instead fixed a 6mm thick cross-piece at the back. The materials used were: 5mm cold-rolled steel for the sole, 3.2mm C3800 brass for sides and some 3.2mm thick 1080 steel for the blade.

The bed angle is 15 degrees which is probably a bit lower than the Norris on which it’s modelled. I’ve read somewhere that Norris typically used around 18 degrees for these plas, but there is no mention of the bed angle of the 31/32 series planes in any old catalogues available to me.

I drew up a plan & elevation from the catalogue pics and made a full-scale mockup to check that everything would fit. I had length & width, but had to guestimate the height of the sides. 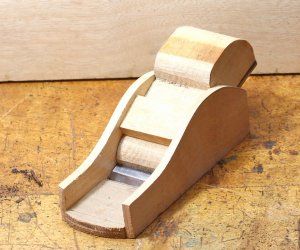 The wedge/handle on the Norris looked unnecessarily long & out of proportion to me, so I shortened it quite a bit on the model, then decided I’d made it too short, so I ended up making it as long as I could squeeze out of the scrap of Macassar ebony I had for the wedge & front bun. With absolutely nothing to spare, I was a little nervous when it came time to cut out the pieces!

Apart from the sole, it was a straightforward build. For a bed angle of 15 degrees the sole has to be split & re-joined because there is no other way to cut a bed at that angle with hand tools without making a huge mouth. Typically, the two pieces of sole are re-joined with a ‘tongue & groove’ or simply indexed with a Vee joint. I prefer a T&G join, which is not as hard to make as it may seem if you’ve not done it. Two tools I find essential for this job are a good-quality flat needle file & a home-made scraper (from an old saw file) to clean out the groove & square the shoulders of the tongue. 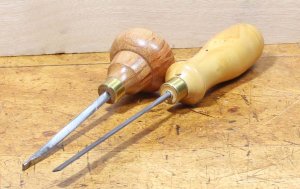 I have never got it absolutely perfect, but a tiny mismatch is easily rectified during lapping Apologies for the blurry pic, the camera decided to focus on the front edge, but here is my sole with joint formed, ready to scribe:

If the join is accurate & holding firmly, fitting sides to sole is no more difficult than fitting a single-piece sole, but you do need to fit the tails to their sockets very snugly with split soles, so the two pieces can’t pull apart when you start peening.

This one went without a hitch, sides tapped on firmly: 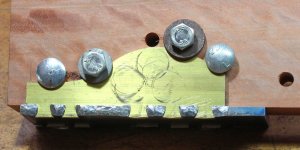 I decided to fit the bridge permanently on this plane instead of using ‘floating’ screws as I've done with my chariot planes. I couldn’t drill straight through for the front pin without hitting my ‘cupid bow’, so instead I threaded some 3mm brass rod & screwed these into holes tapped into the bridge, then peened them into recesses on the sides: 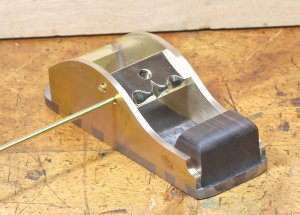 You could also do this with tapered pins (called “clockmakers pins”) hammered into undersized holes in the bridge. Both methods make a surprisingly strong joint. Using the threaded rods approach, I don’t have to commit to setting the bridge in place permanently until I’m happy everything is right. The crosspiece at the back was soldered in to hold it in place, then pinned similarly.

The blade can now be inserted & tightened down to lap the sole. There was a very slight misalignment of the two sole pieces, but it lapped out quickly & before too long, I had a nice, flat sole (small soles are far, far less work than big ones!):

At last, the fun part has arrived. First shavings:

I had a bit of bother with the mouth – I’d made it very tight, and didn’t slope the front enough so the blade would not come through enough to cut properly The thinnest needle file I have wouldn’t fit through the slot, but the front of the blade bevel was very sharp & needed a trim. I found I could just get the end of one of those plastic diamond-file paddle thingies in, & worked a wee bit off the sharp edge of the blade bevel. A knife edge here is undesirable anyway, it is in danger of deflecting if the blade is over-tightened so it needs blunting a bit, imo. After that edge was eased, I could just get a small file in and take off the fraction needed to get the blade though comfortably.

I followed the instructions that came with the piece of steel I bought for my blade & quenched it in canola oil. I don’t think it came fully hard, a sharp file will just ‘grip’ the side at the treated end, but not cut it. So I decided to skip tempering & just see how it went – the worst that could happen is that it might chip a bit on our bone-hard woods.

However, it’s had a good workout on various woods now, including two that are notorious edge-dullers and the blade has taken all in its stride – no chipping or edge damage that I can detect, and the edge seems to be as durable as any of my commercially-made blades. Sheer fluke!

I didn’t like my knurled thumbscrew so I made another that’s a little closer to the style of the knobs of the time. 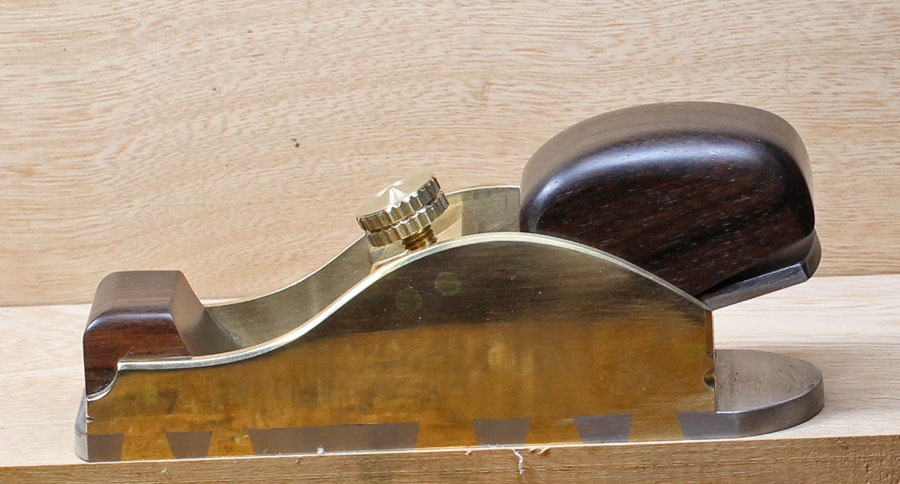 And the good news is that it’s a really sweet little plane! It has already made my Veritas apron plane redundant – I used to use it a lot, but this one is just a whole lot nicer; a handful of ebony beats a handful of cast iron any day. I may get around to fitting a screw adjuster in time, but no pressing need, it’s very easy to hammer-set, so it may never happen - we’ll see…

Another wonderful plane, Ian! Simply wonderful .... but ... where is the Sheoak?

I had a similar problem with my last plane where the mouth was a little to tight, In the end I ground one face off of a flat needle file which I could then very carefully fit into the mouth. With the file being so thin I had the constant fear that it would snap in half! Thankfully I only needed to remove a little metal to get the blade to come through.

Your second thumb screw looks great. did you hand file the groves or did you machine it on a lathe?

Beautiful and inspirational work as always. Thanks for taking the time and effort to post a thorough walkthrough. It's much appreciated.
I

Hattori-Hanzo said:
I had a similar problem with my last plane where the mouth was a little to tight, In the end I ground one face off of a flat needle file which I could then very carefully fit into the mouth. With the file being so thin I had the constant fear that it would snap in half! Thankfully I only needed to remove a little metal to get the blade to come through....
Click to expand...

Thanks all, for the compliments...

HH, a slightly different solution to the same problem, but what works, works eh? I would have been nervous about breaking the ground-down file too, I've snapped the tips off few of them sharpening saws!

I was rather annoyed with myself because I thought I'd done enough split soles by this to have it sorted. I'd checked it as carefully as I could before peening up the body, so it came as a bit of a surprise when I discovered it was so tight afterwards. The peening must have tightened the T&G joint a teeny bit more, which is good as far as that goes, the join is near enough to invisible from the sides and there is a just a very faint line on one side from the bottom, so I'm happy about that!

The knob was knurled on a metal lathe, though I have done something similar by hand using the indexing facility of my wood lathe. But for this knob, I used some new straight wheels I got for my knurling tool - big toothy things that took a lot more pressure to cut the hard brass than the diamond pattern wheels I've used to date. I've been trying to make thumbscrews a bit more like the ones on old infills. I'd really like to be able to do "rope" pattern knurls, and have seen some instructions on how to make the wheels for doing that, but not sure it's within my abilities. I might get around to having a crack at it some day.

Derek - I'm running short of she-oak; haven't been able to get up north & harvest a fresh supply, thanks to this damned virus & other things. The ebony was just exactly the right size, & needed using up. It doesn't look too shabby, does it?
[Edit: I was tempted to do more shaping of the wedge & bun because of the featureless wood, but I'm pleased I didn't, now. I think it would've looked too fussy if I'd done that. The simple lines suit it much better, imo.]

Anyway, done with plane making for now - got a small batch of saws coming up, just for a change....

R
A question for planemakers - Secondary bevels on dovetailed plane