Not sure how this is going to turn out but, I'm having a go at an end table. Like the Hexagon shelves, this will be used to display house plants, at the end of the dining table...Timber, I'm using some Beech boards that have been under the car port for around four years. When I was given them, they had been air dried for four years. May be not the best looking boards, but I'm making the most of what I have, and I'm happy to make the most of the quirky bits

First thing after cutting one of the boards up to make the top was to remove the bark and then to level it, as it was too wide for the P/T. I've never used a router before to level a board so I was looking forward to this, it's always more fun doing something new for the first time...I had the jig I used to cut grooves in the side panels of the planters, but this would need strengthening with the help of some wall shelving brackets. Resting in the "A" frame of the shed I had four beams around 75 x 100 mm, timber from some old gates I was given last year. I planed these up a few months a go and will eventually be used to make a Pergola, anyway, a couple of these would be perfect as side rails to hold the jig and router. I don't have many 1/2 inch cutters anymore so it was make do with what 1/4 inch I had, thankfully, I had one cutter which I reckoned would do if I took my time. After leveling one side, I turned the wood over and put a piece of 9 mm MDF under it. 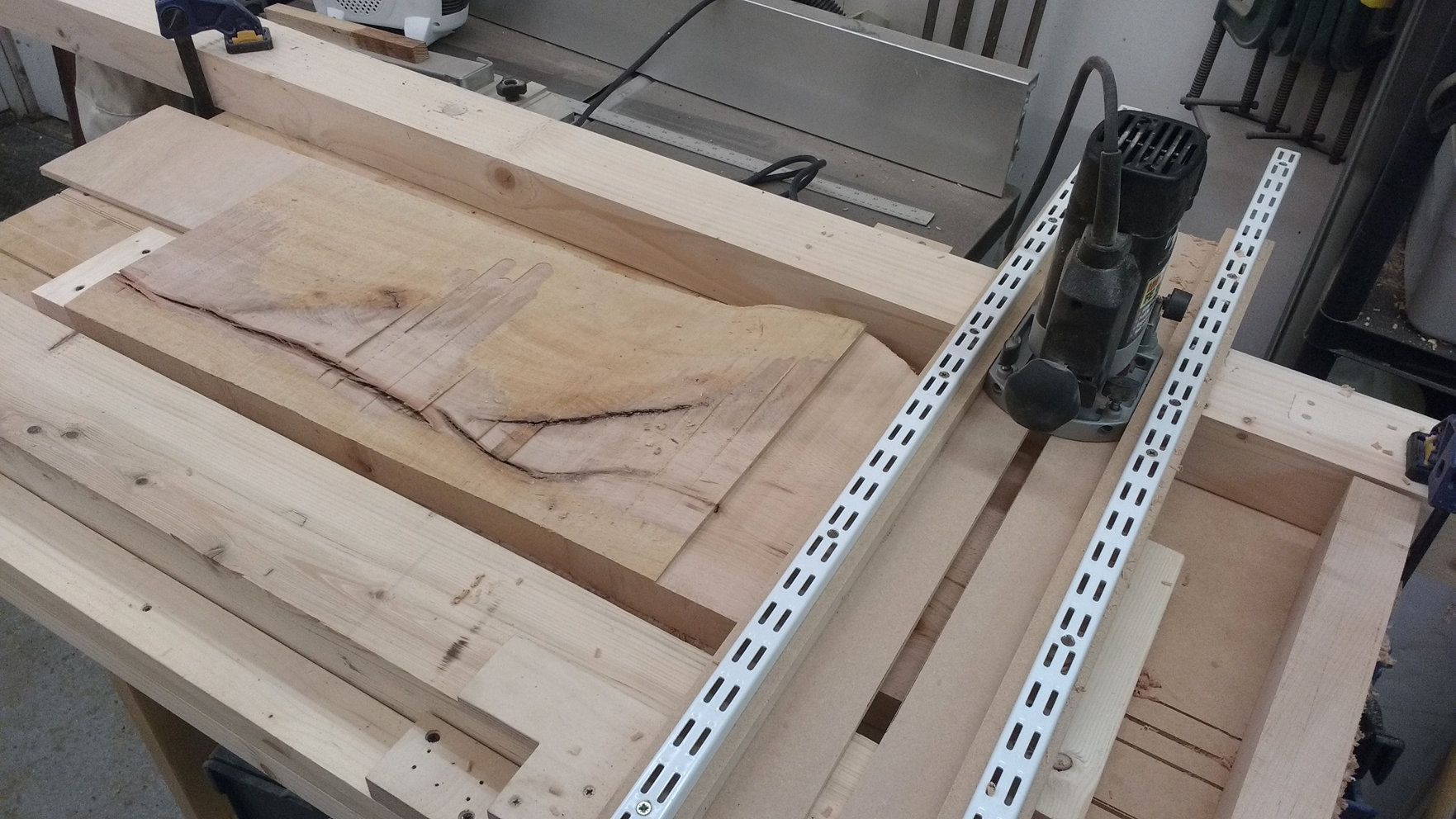 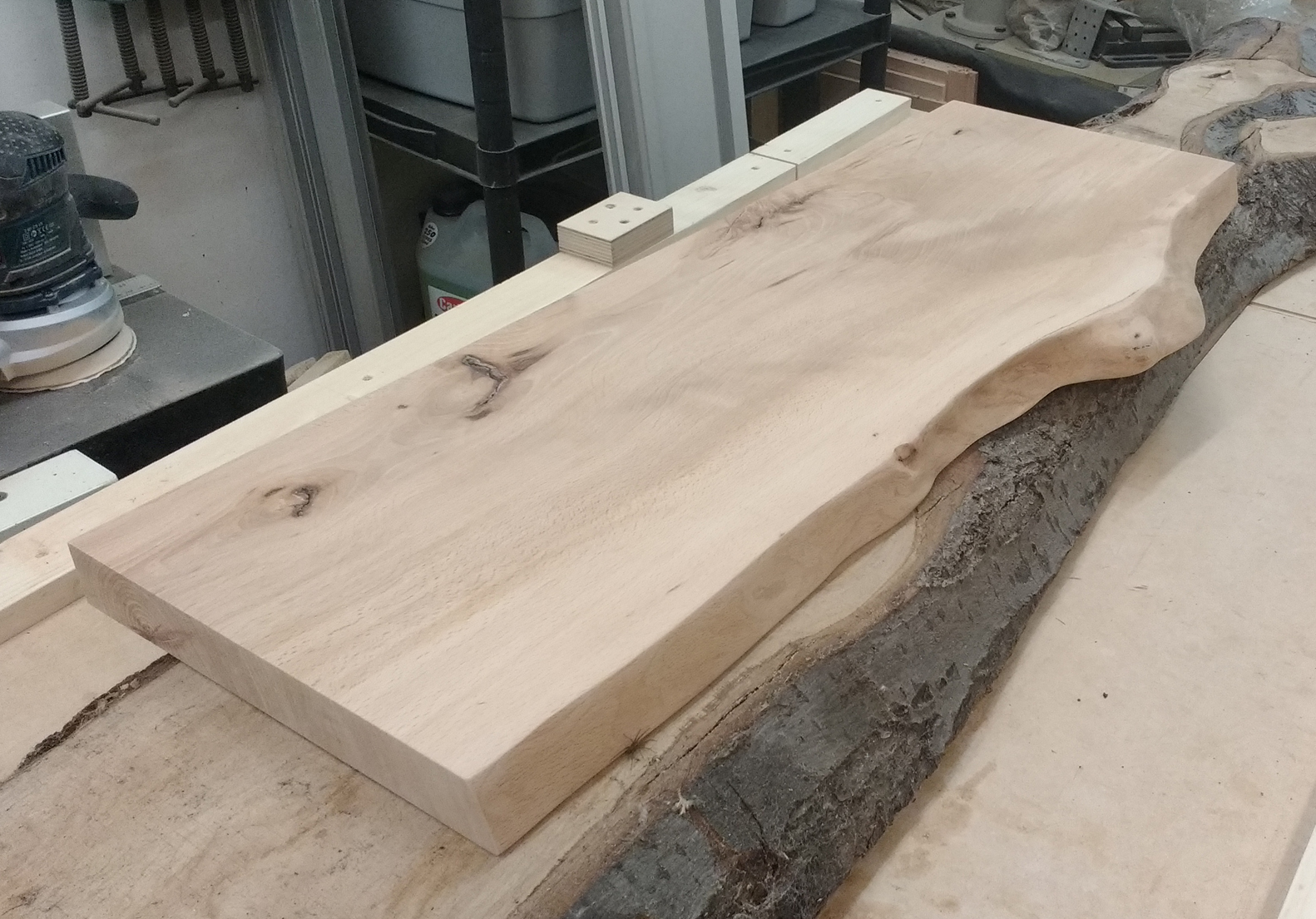 I cut this board around half way, bottom part for the legs, no doubt I'll find a use for the top part at some point. 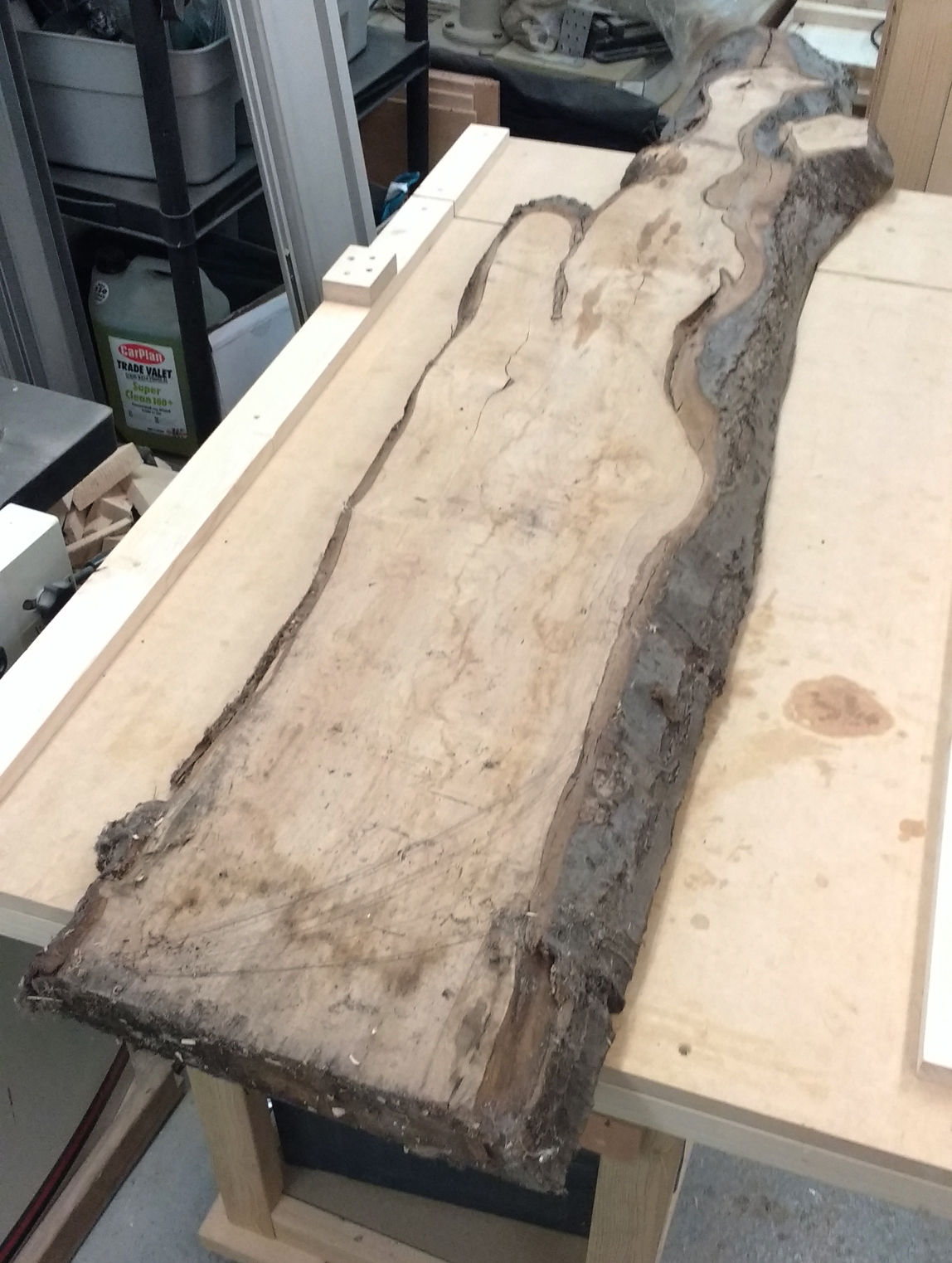 I used the track saw to make three shallow cuts and used these as a guide for the jig saw. 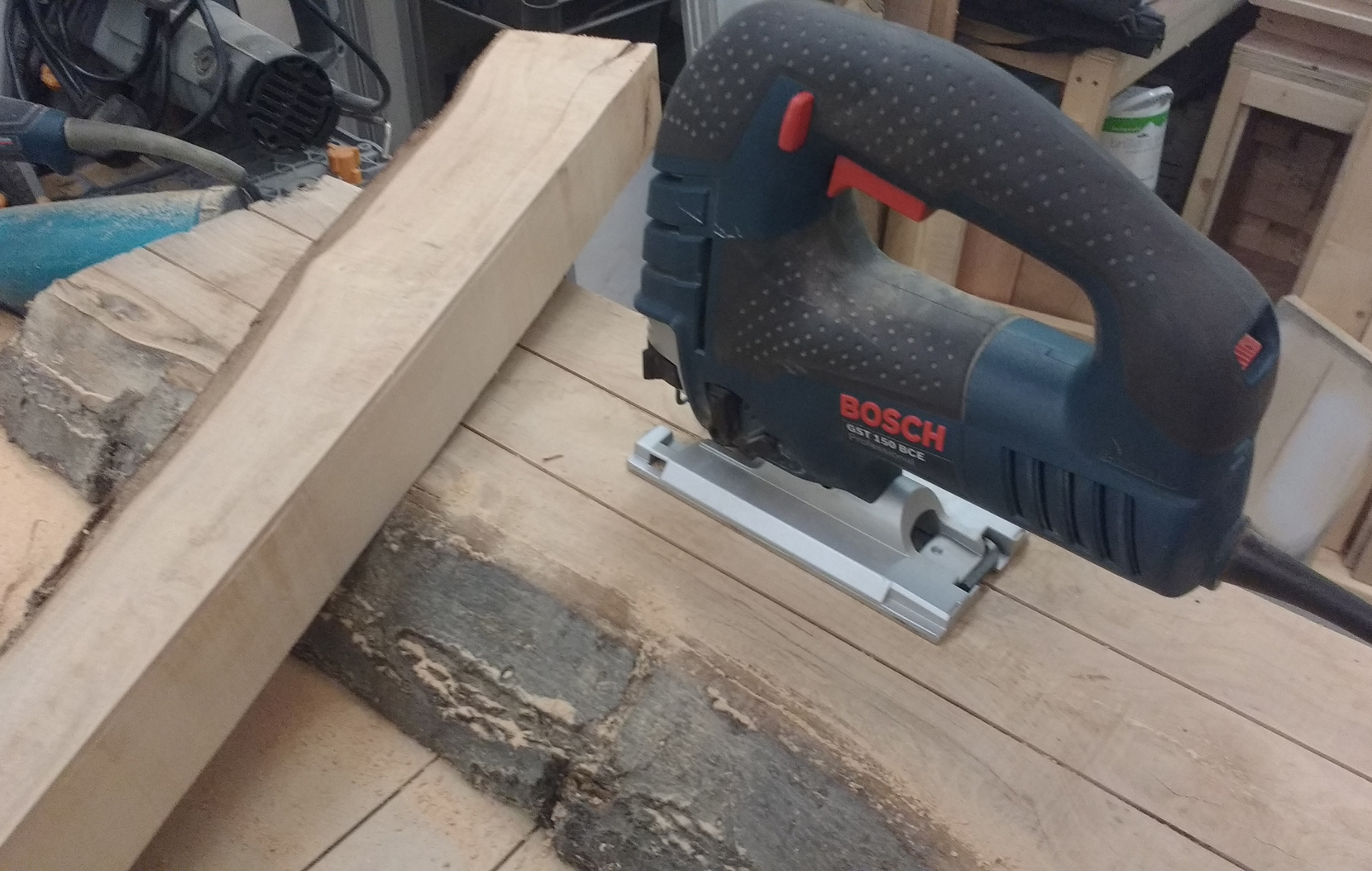 That's about it at the moment. I've put the two back legs through the P/T and squared these at 42.5 mm, haven't decided on the finished size yet. The front legs, these need a little more work

Appreciated Scooby I've got a couple more boards to cut up for the side rails and a bottom shelf.
Hopefully by the end of this week it'll start coming together...
J

Interesting post with milling the beech boards Pete. Looking forward to the next stage.

You're a brave man using a jigsaw for ripping!
C

Looking forward to watching this develop, Pete. One question - as the wood's air dried and (if I understand) not acclimatised to the house, will the wood potentially warp once exposed to central heating - assuming it will be?
P

John15":ovm2goqf said:
Interesting post with milling the beech boards Pete. Looking forward to the next stage.

"Milling", I knew there had to be a correct term for it John, thank you I was surprised how little sanding it needed afterwards, but not as surprised that it actually worked.
P

MikeG.":27knr6ou said:
You're a brave man using a jigsaw for ripping!
Click to expand...

I never thought it would be a problem Mike, but that could be down to a lack of knowledge.
I've sold so many of my machines over the past few years, I'm down to the mitre saw and P/T,
then a few power tools. Making the shallow cuts with the plunge saw a big help, and more
easier than following a pencil line.
P

Chris152":1gtlvr45 said:
Looking forward to watching this develop, Pete. One question - as the wood's air dried and (if I understand) not acclimatised to the house, will the wood potentially warp once exposed to central heating - assuming it will be?
Click to expand...

We very rarely have the central heating on Chris, can't afford it sadly. Thankfully we do have a log burner which gets lit when our lass comes home from work and if the temp has dropped below 17. It'll be interesting this year as our lass has so many house plants we have to keep the humidity up, at the moment humidity is 66 and the temp is 17. Apparently we need to get a humidifier and keep the temp down on the log burner which'll fun.
The shed averages around 9 this time of year, my little heater gets up to around 12, just enough to take the chill off...Not sure how long the timber will need to acclimatise to be honest, it'll have several days in the shed before coming in to the house. Hopefully that'll help it a little. I don't mind the odd crack or split, and as long as our lass is happy, I can live with a little warping
P

I got bit more done today. One of the boards had a split down the centre, so I thought I'd cut this in two and use this to make a few rails. 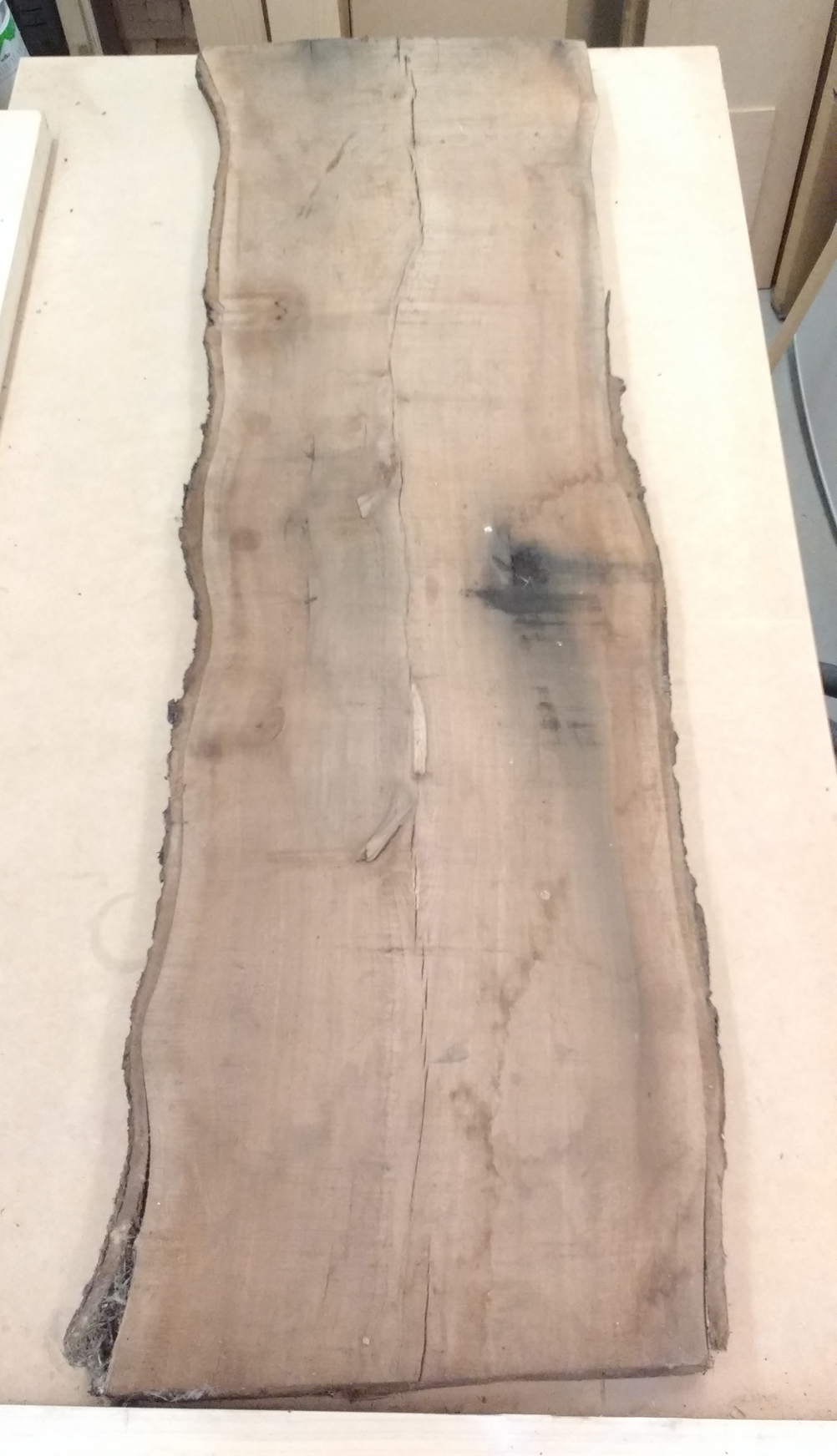 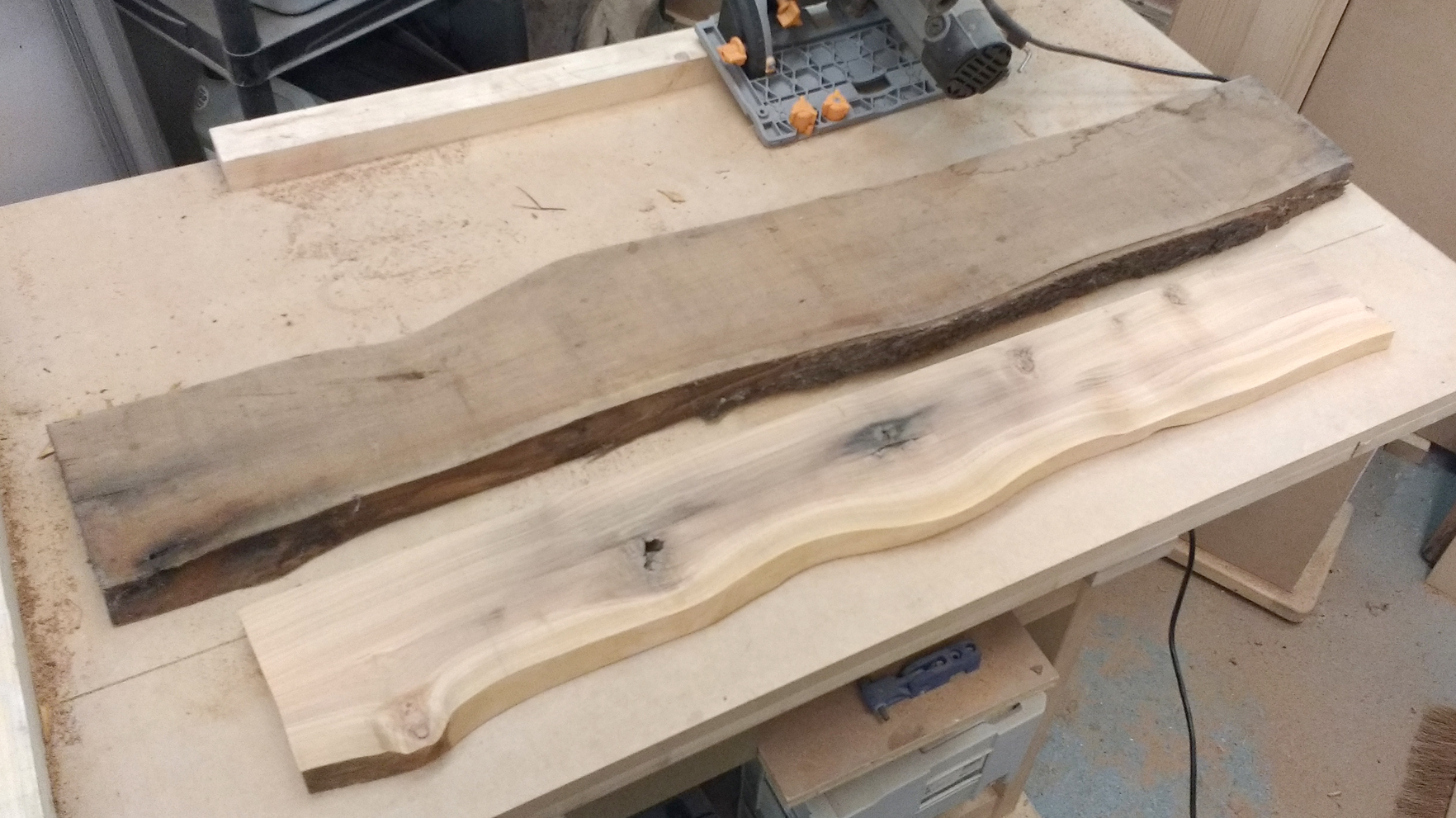 I was a bit lucky with this! Just as I was about to put the board through the P/T again I noticed something shiny. Thankfully the blades had only just touched it, like it hadn't taken a thin layer of rust off. No idea how it got in there, perhaps it was something that was knocked in to a very young tree along time ago...Thankfully, no damage was done to the blades... 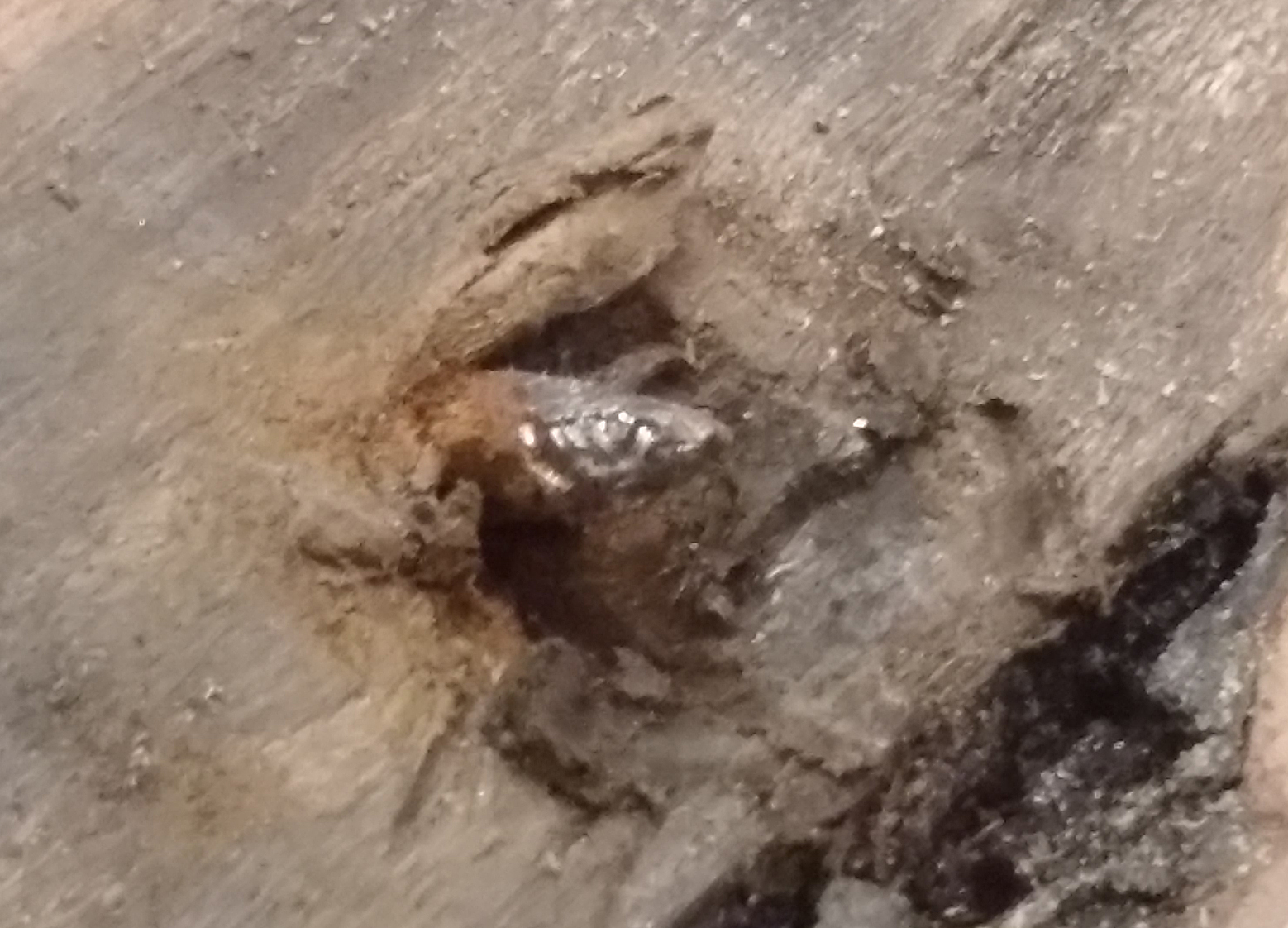 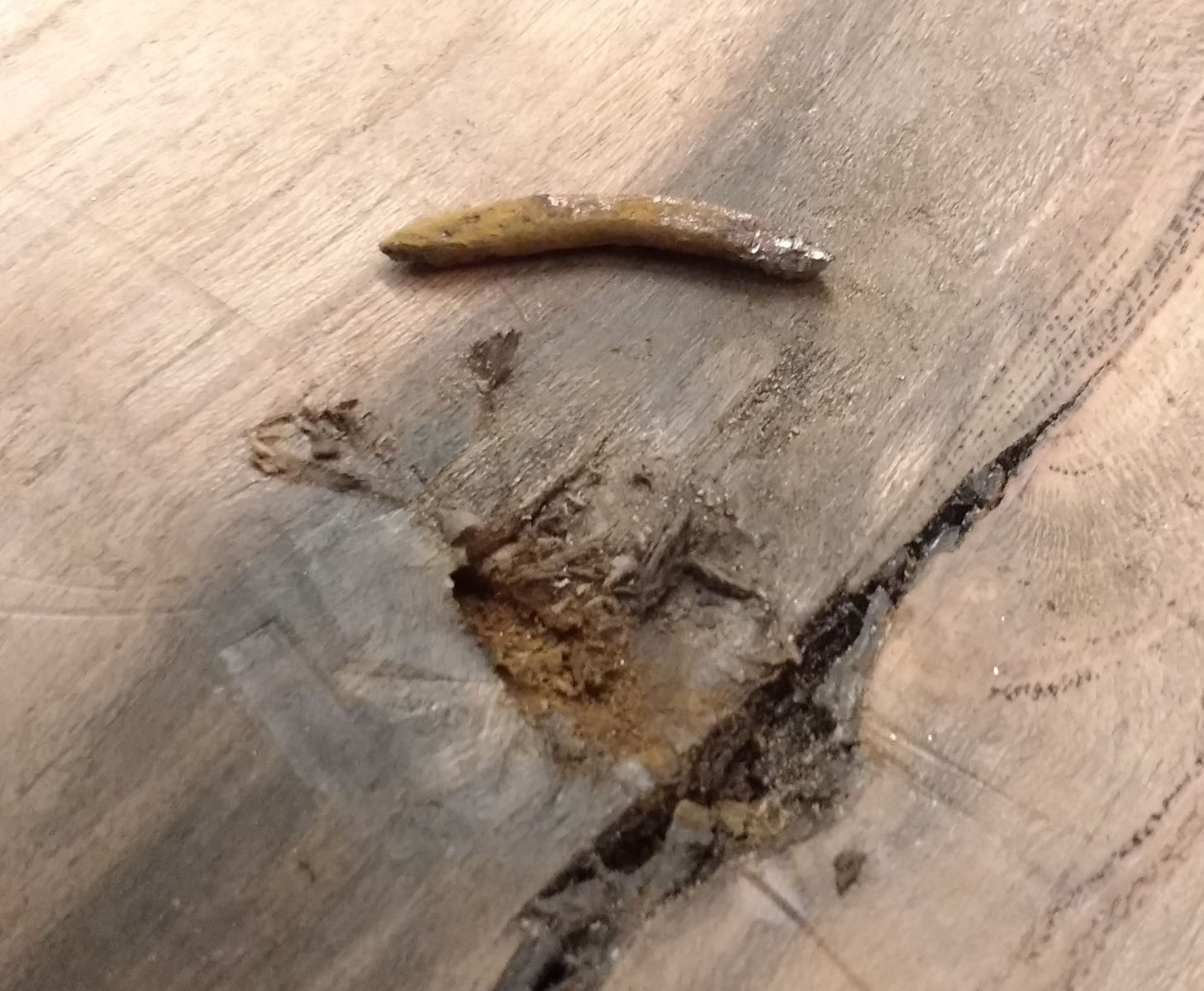 After a couple of hours of making a lot of sawdust, I have four rails. You'll notice the back legs on the right, on the left are what I was hoping to use as the front. I really wanted the front legs to have the same wavy curves after the bark had been removed but sadly, I don't think I'll be able to pull it off. The back legs at the moment are 42 mm square, not sure what the finish size will be yet, but I thought I'd leave them a couple of days to settle before planing to the finish size...

It's beginning to look more like a table I used the Domino to join the rails and legs, the top and bottom shelf will be held on with pocket holes screws. A couple more days and I'll have the bottom shelf cut and in place... 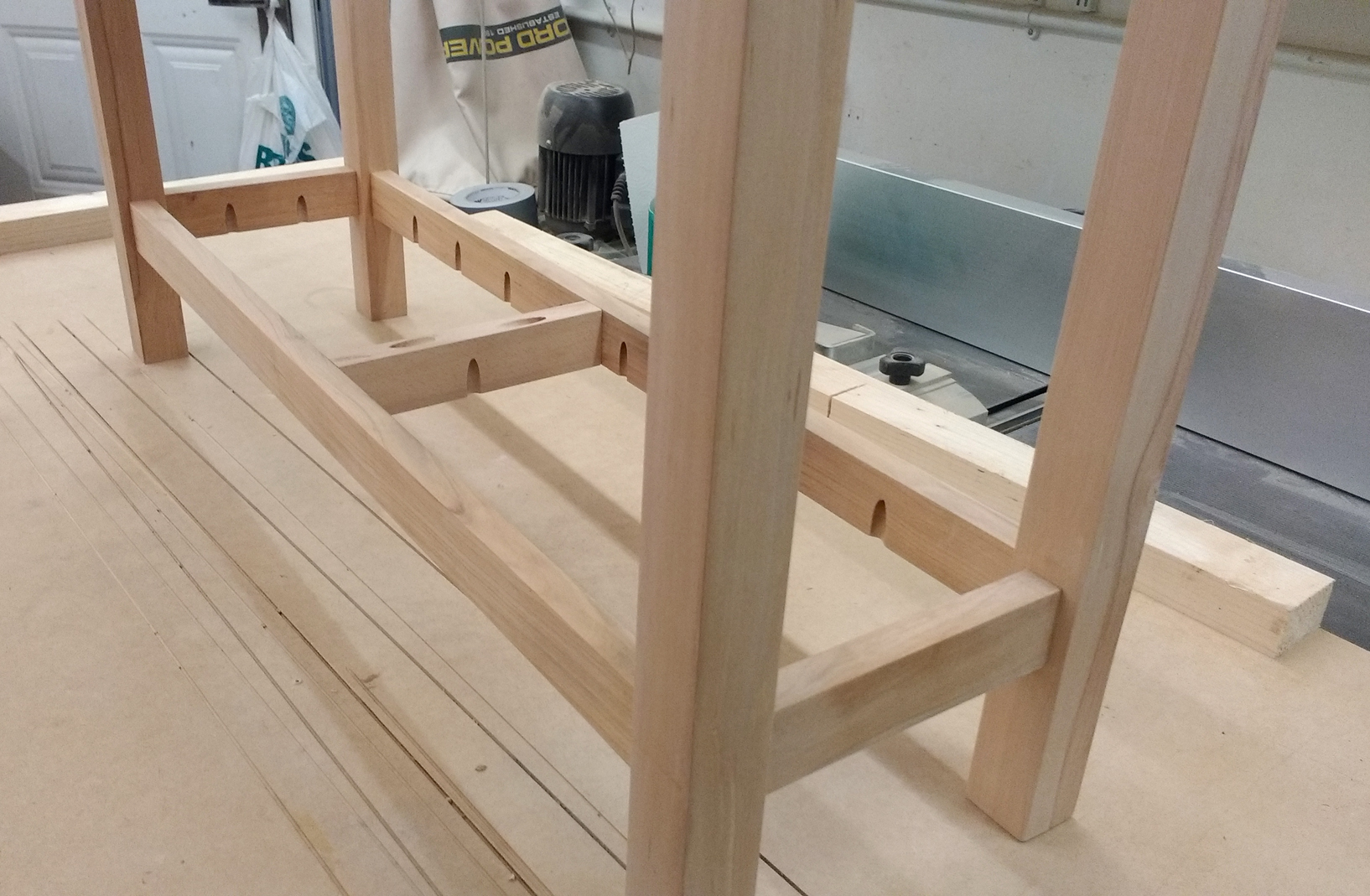 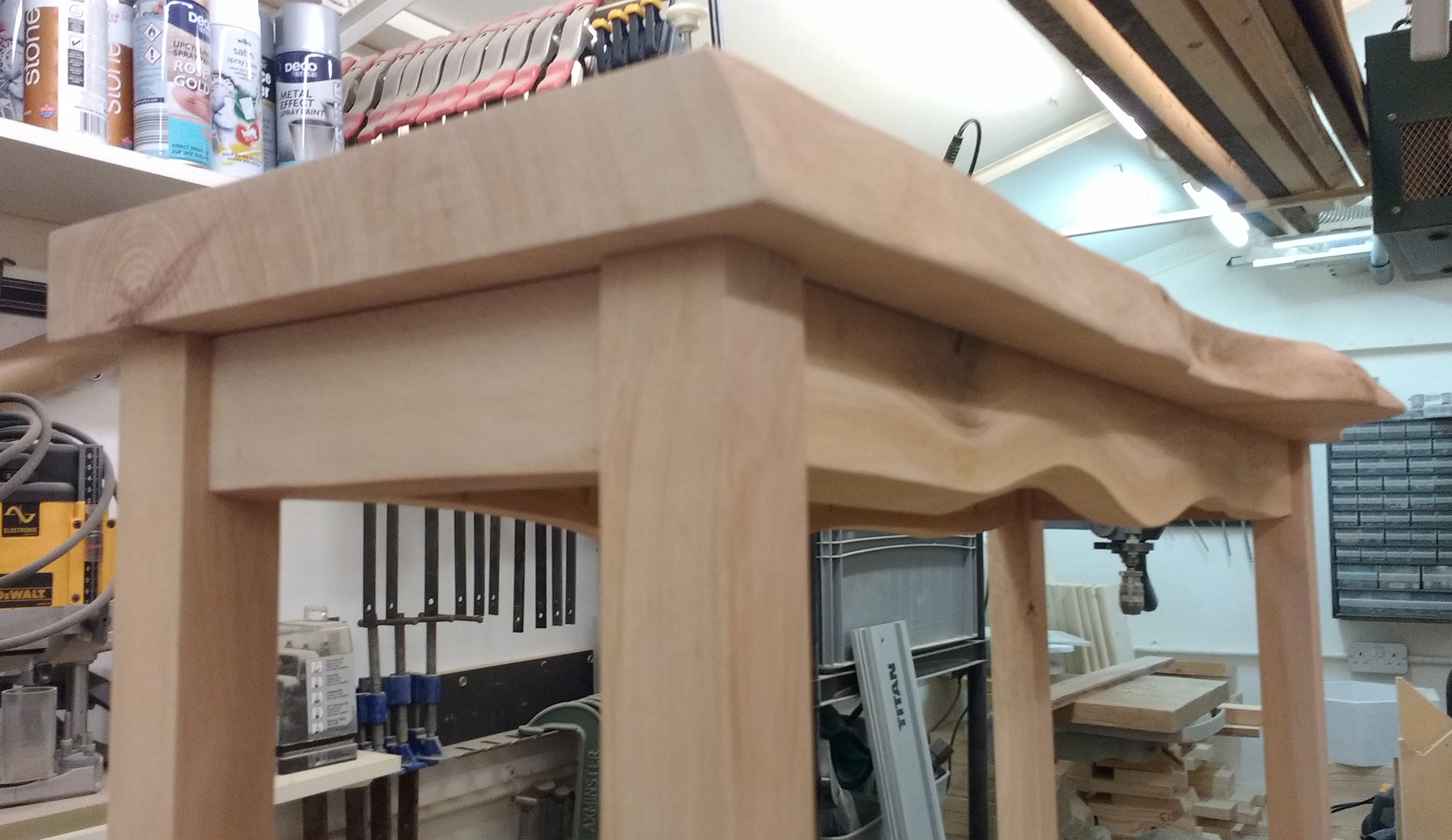 The bottom shelf is now in place, with just a little sanding on the front edge required after removing the bark...Need to give it a final sanding before a finish! 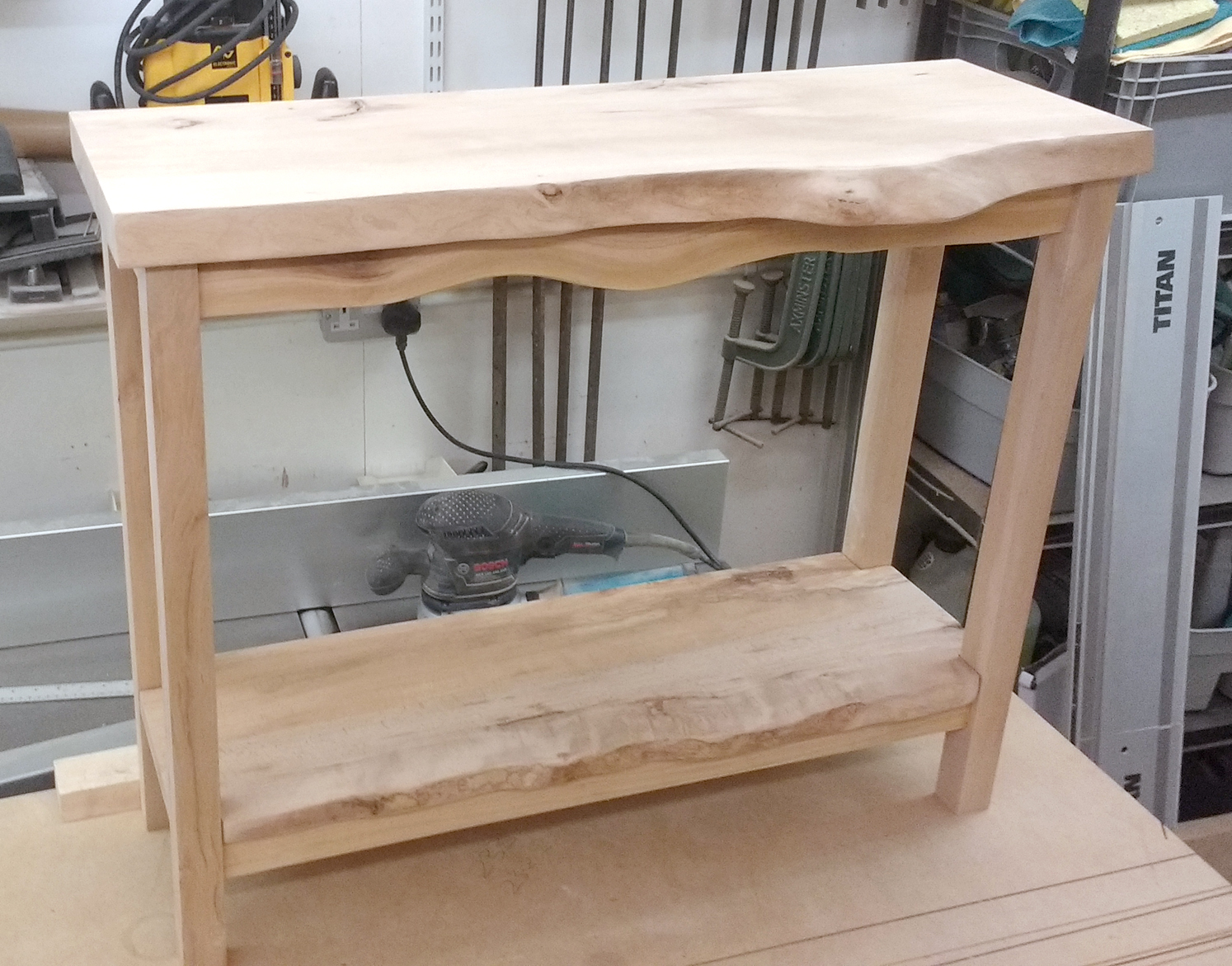 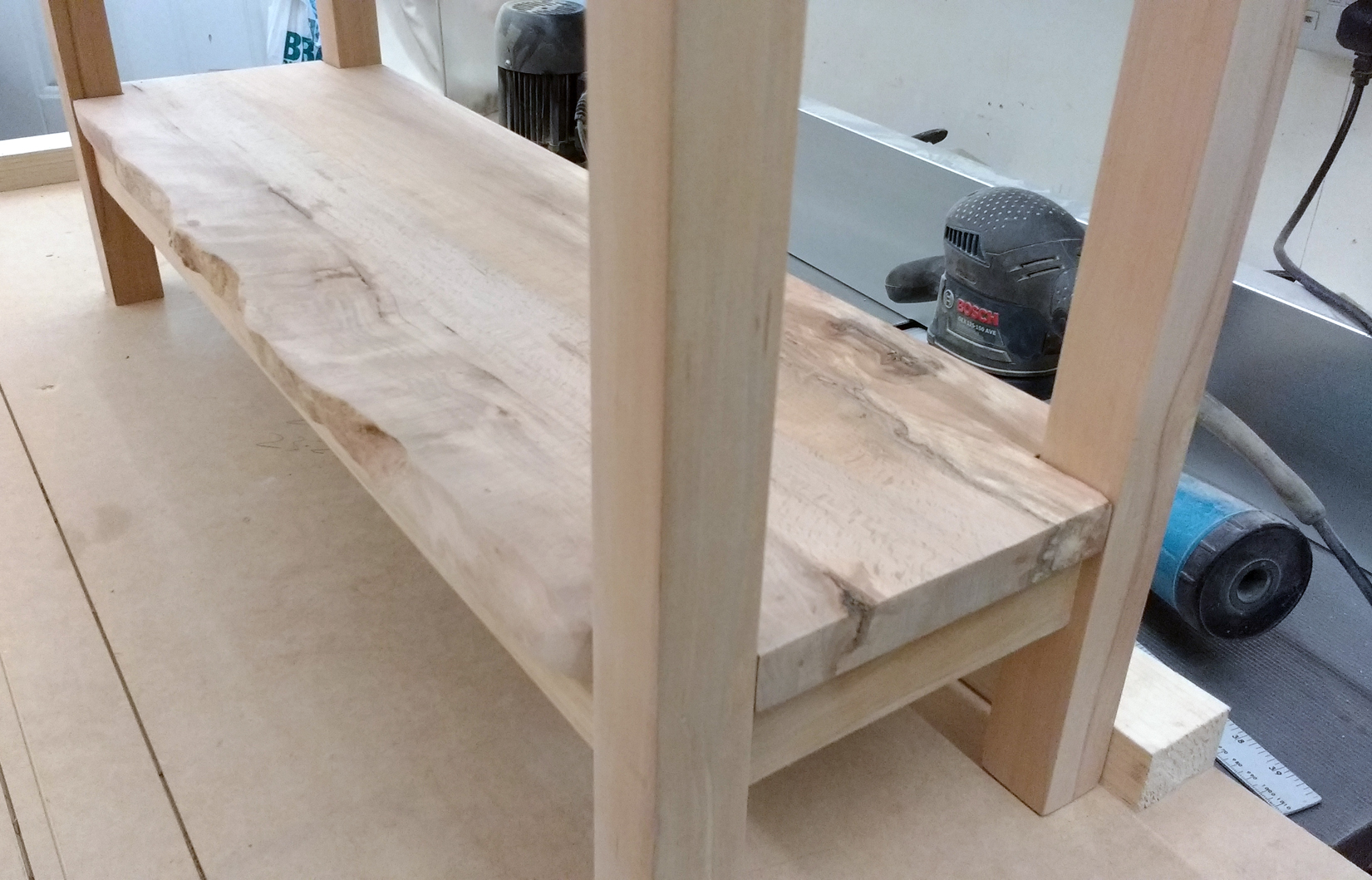 is the table your own design ??
P

Much appreciated fella It's looking even better today!


tomthumbtom8":1gj3s34h said:
I like the look of this Pete

is the table your own design ??
Click to expand...

I never really thought of a design for it Tom as such. I measured the width and height of the dining table, that gave me an idea of the end table measurements, as it had to be smaller in height and length. The timber decided how wide it would be. Our lass asked if I could put a bottom shelf in, then it was in to the shed to start cutting up some wood. I thought it'd be nice if I used the naked edge of the timber for the top, then decided I'll do the same for the top rails. I tried to get away with it for the front legs but the edge of the timber I had wouldn't allow it. The below piccy is typical of how I write measurements downs. Deciding the height of the bottom shelf from the floor is one of those, "That looks about right" decisions...I suppose in my mind, I was hoping that using the natural edge of the wood would be a nice marriage with the plants. 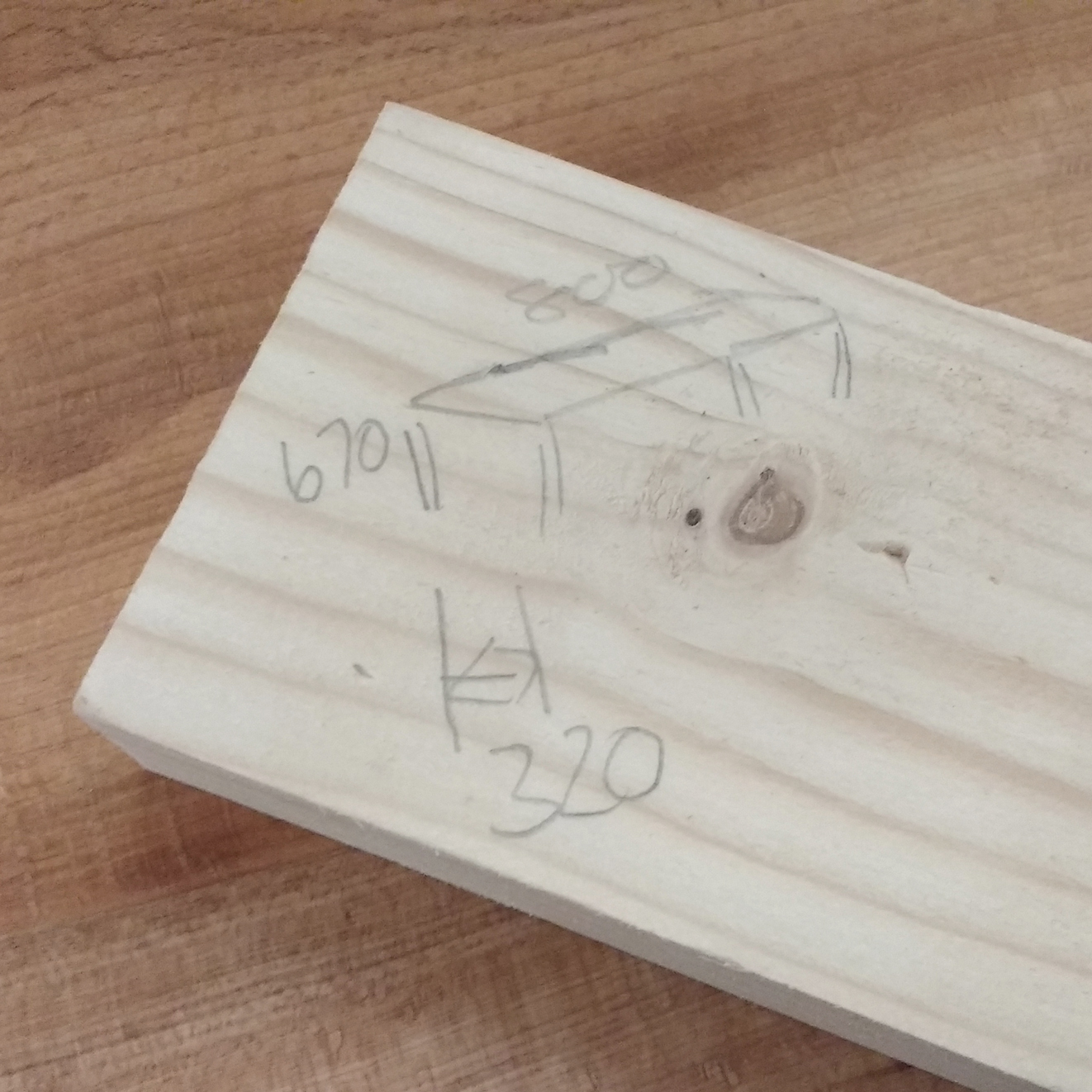 It's almost complete, I need to buy some Wipe On Poly but for now, it's had two coats of Danish Oil.
I had a look in B&Q this morning for the WOP, I was sent to "Isle 5", cleaning products.
Our lass absolutely loves the table, her smile said it all...

Now the table has replaced the two bedside cabinets that have been sat there for several weeks, tomorrow I can start work on those 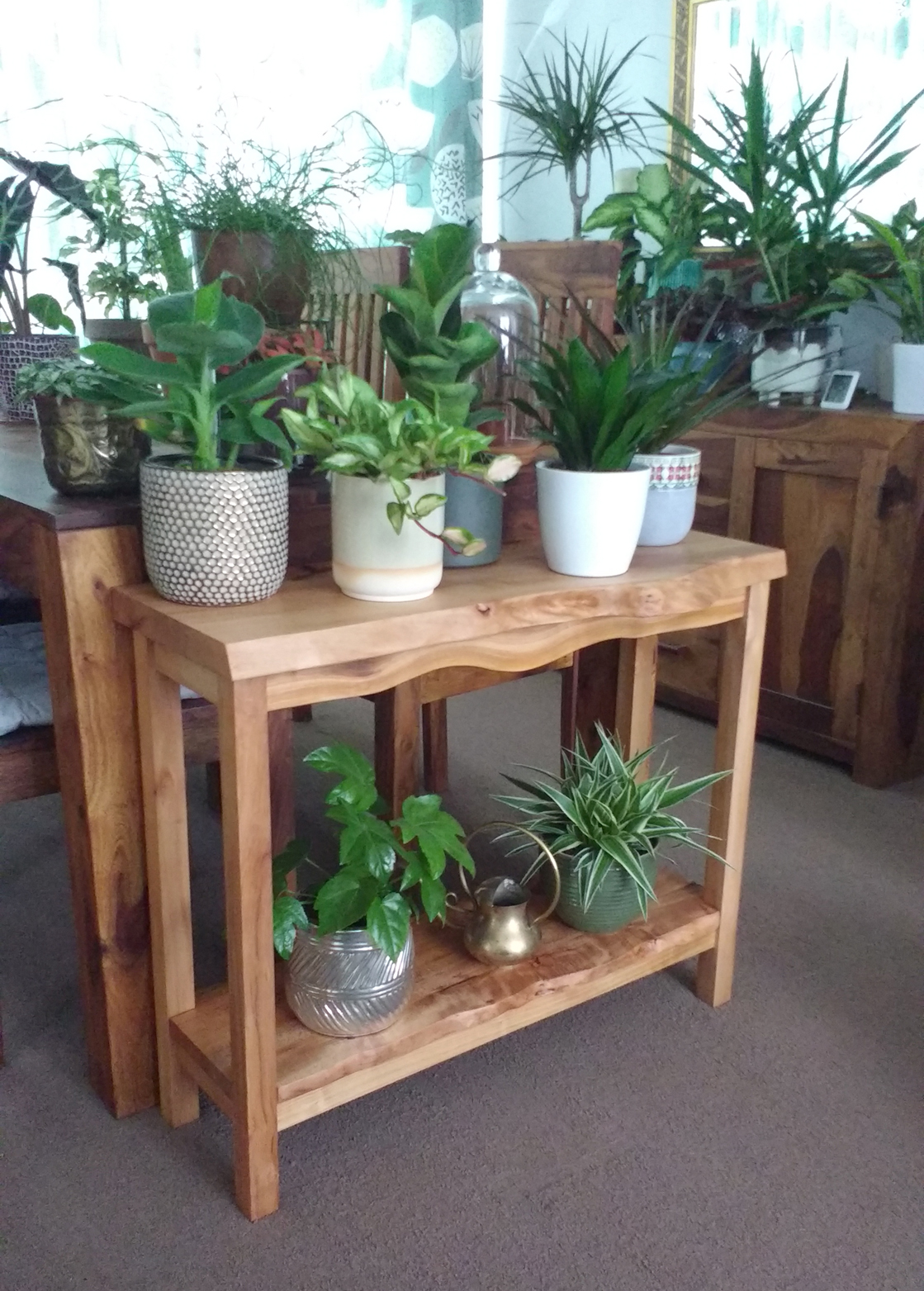 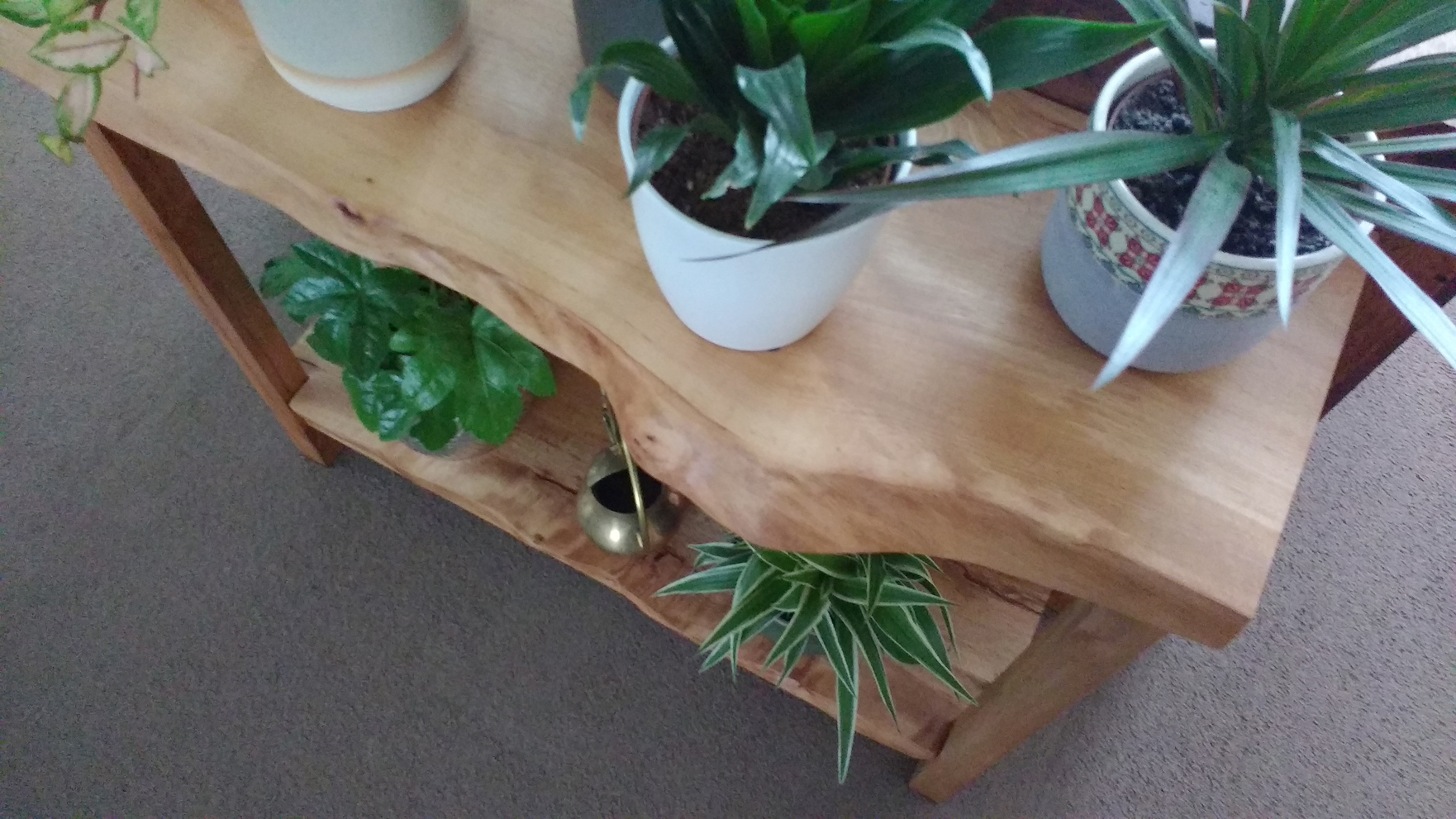 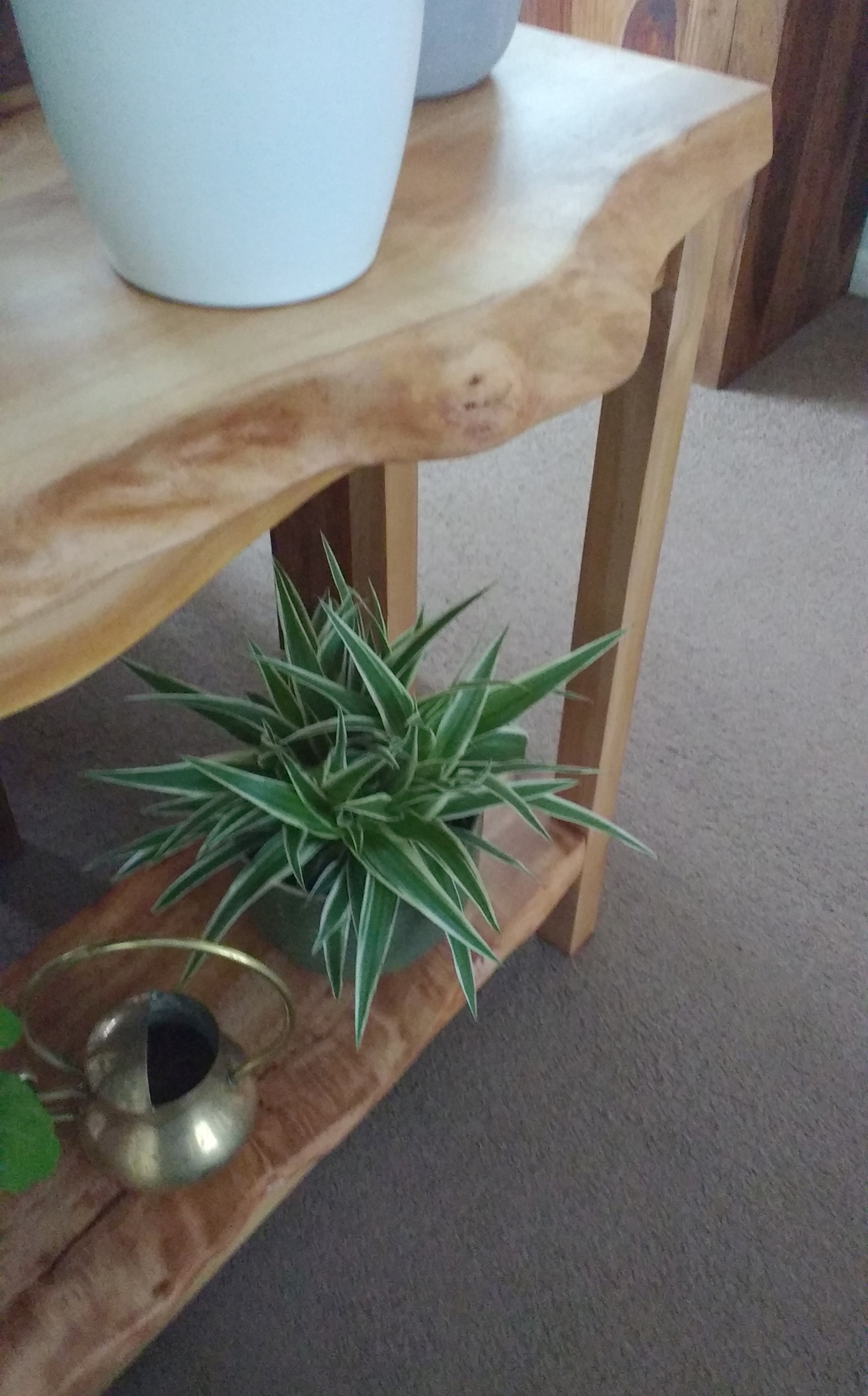 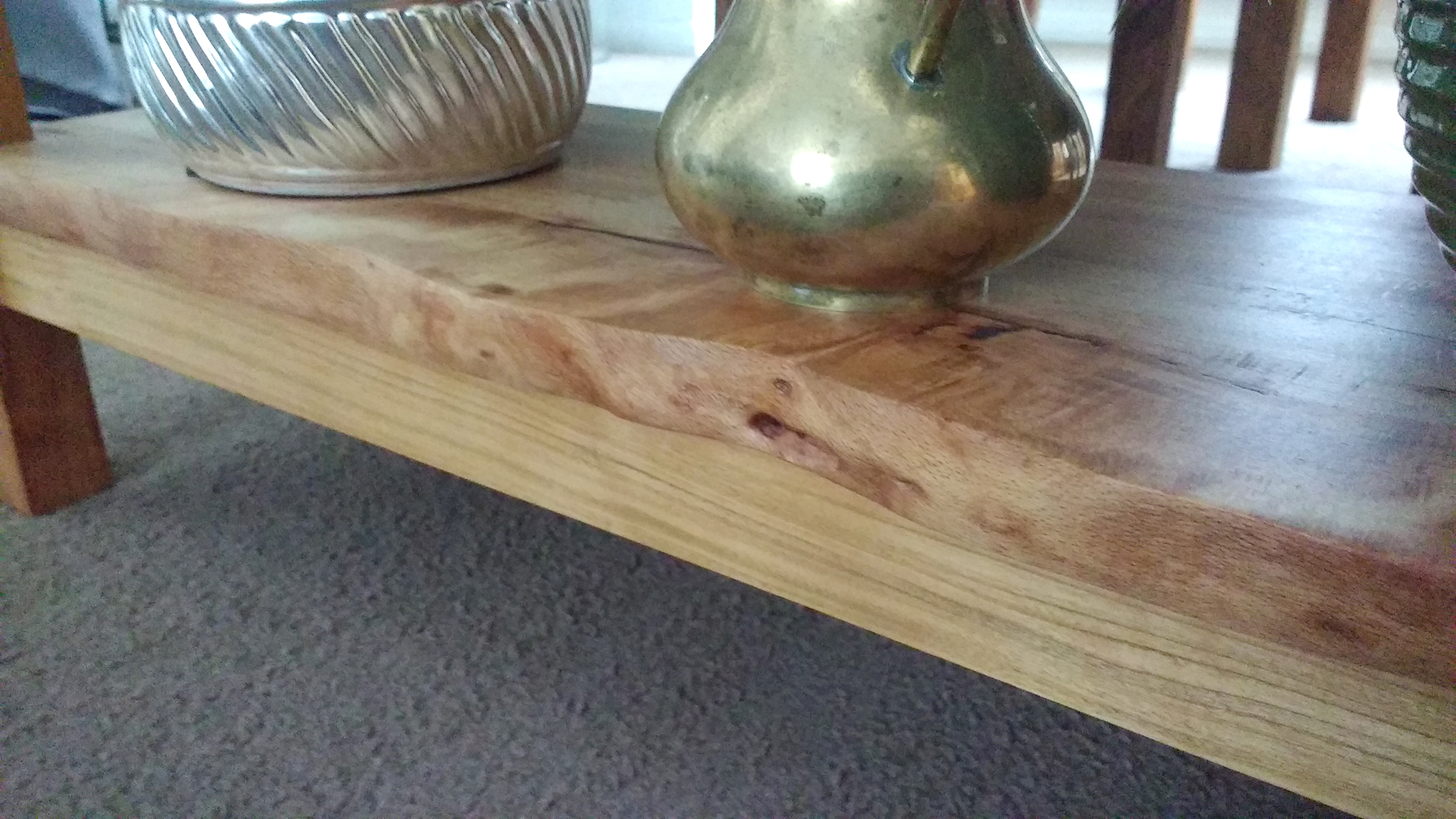 You won't be able to buy wipe on poly, you need to buy some oil based varnish, which may take a little checking of the label, and some white spirits. The last oil based varnish I got was from Wilko a year or so back, so it is still around but most were water based. Look for one that says that you clean the brush with white spirit.
P

This is what I thought/hoped B&Q might have had in...