As much as i like my T/S, its a Deft T30 , the dust collection from the cabinet below is next to useless.

So in keeping with the rest the extraction changes i'm trying to implement, i decided it had to change.
Currently its just a 100mm port at the wrong side of the cabinet. 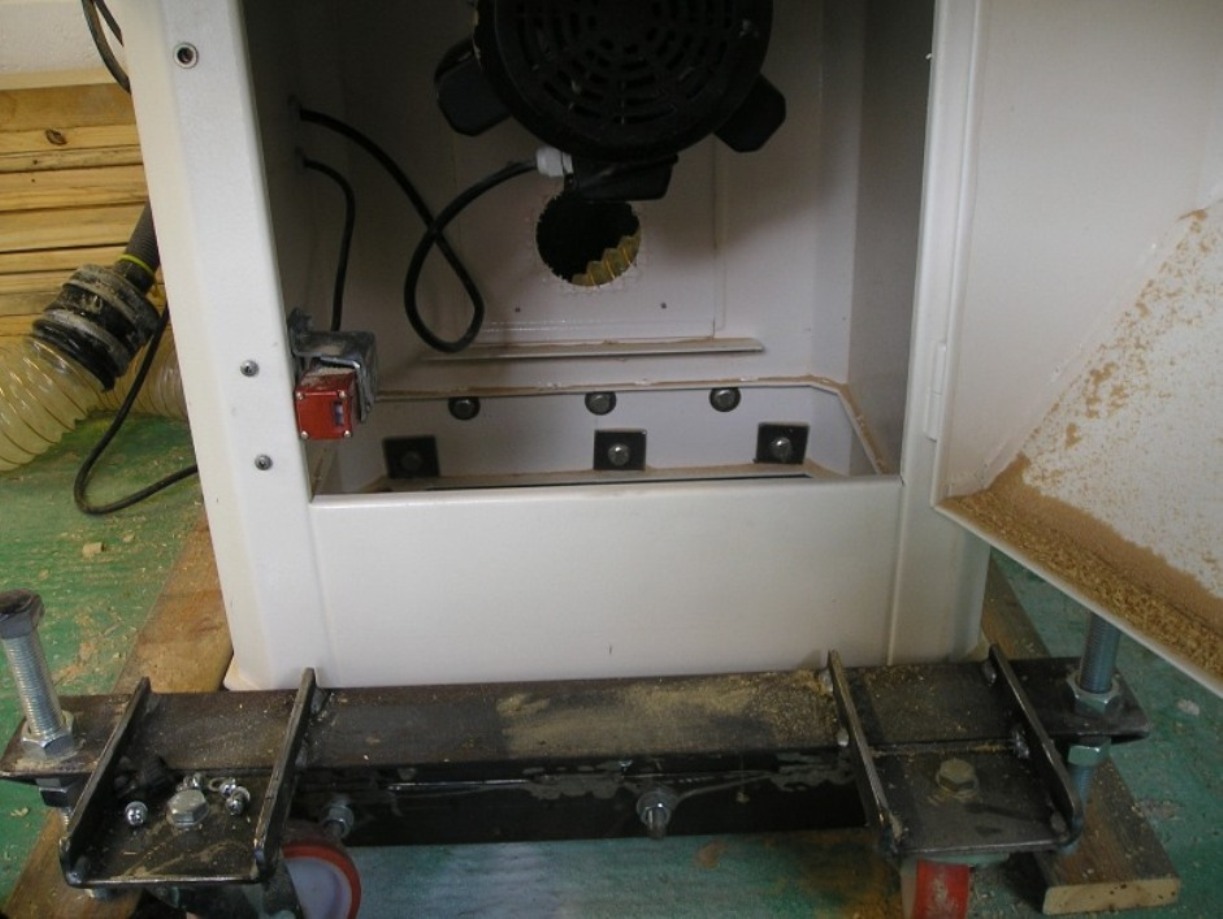 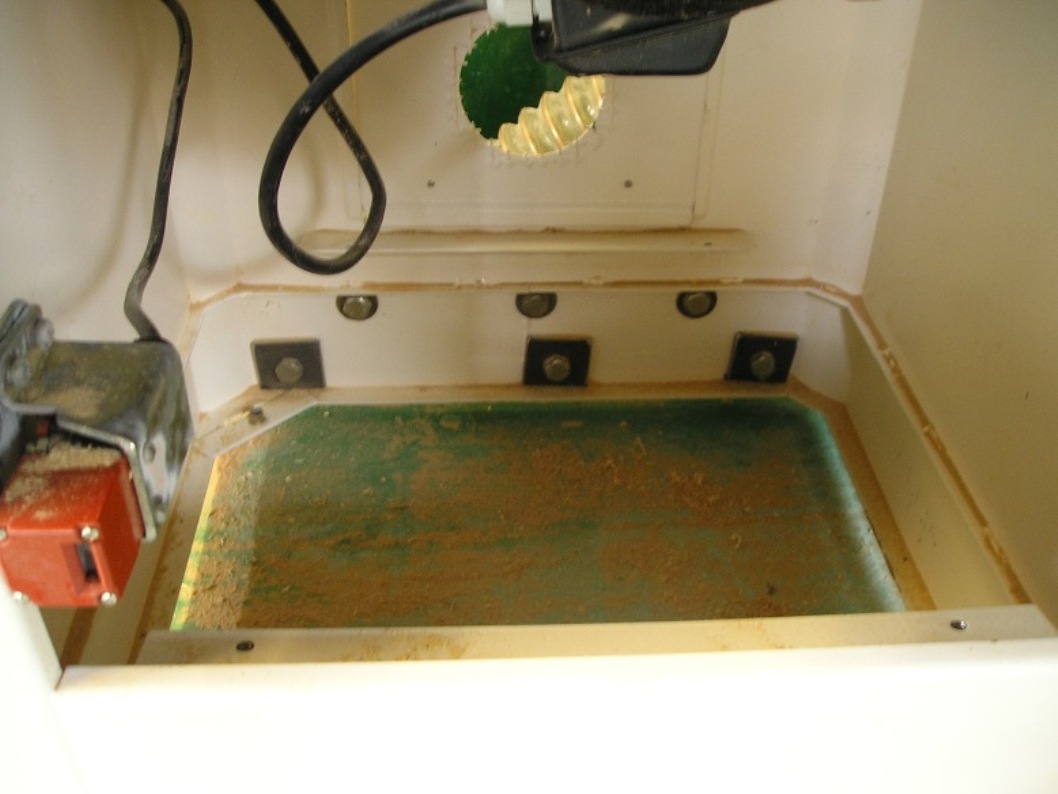 Watching where the dust and chippings landed made it obvious that any extraction had to be from directly below as the side port was just too far away.

But with limited space beneath the motor it needed to be a shallow fitting. After a trip down to the local builders merchants, i decided on this.
Its a 270 x 200mm Drain hopper / Grid, attached to a 110mm soil pipe fitting called a "P" trap 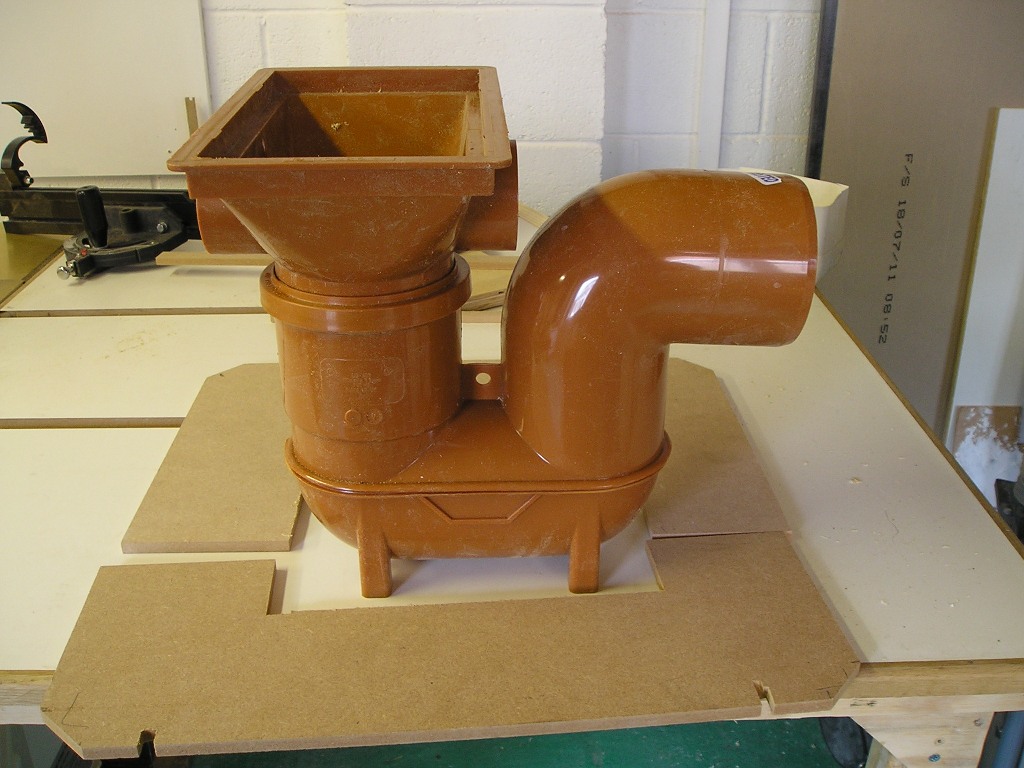 A split 12mm MDF shelf supports the hopper. The height of the P trap was just right for fitting through the existing port in the cabinet side 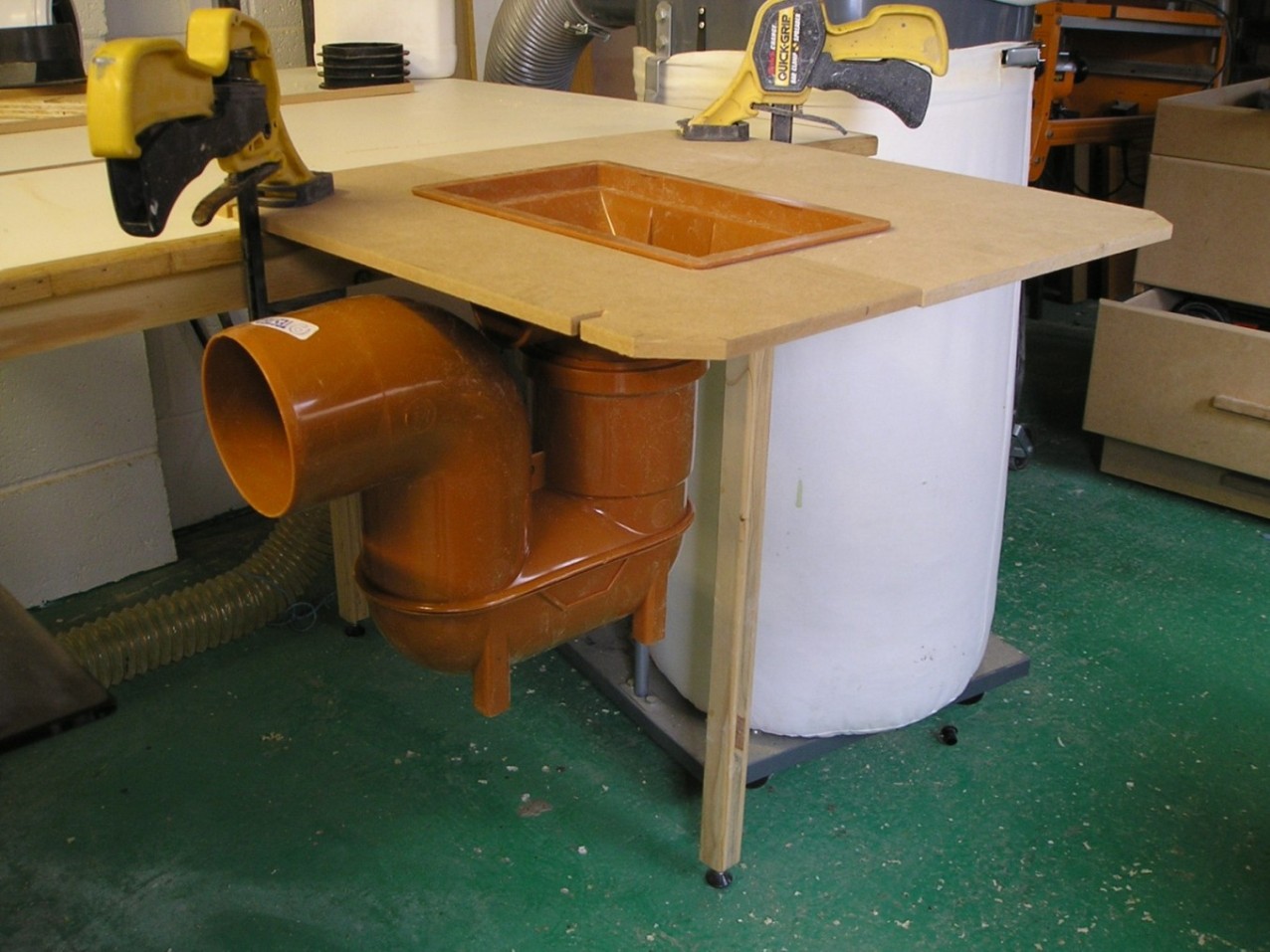 Now for what turned out to be the start of the tricky parts, assembling it inside.
Even left as it is in the photo below, it still extracted about 70% of the dust, which is 70% more than it previously did.
All the dust that was missed was located forward of the hopper, nothing at all was left on the shelf on the far side. 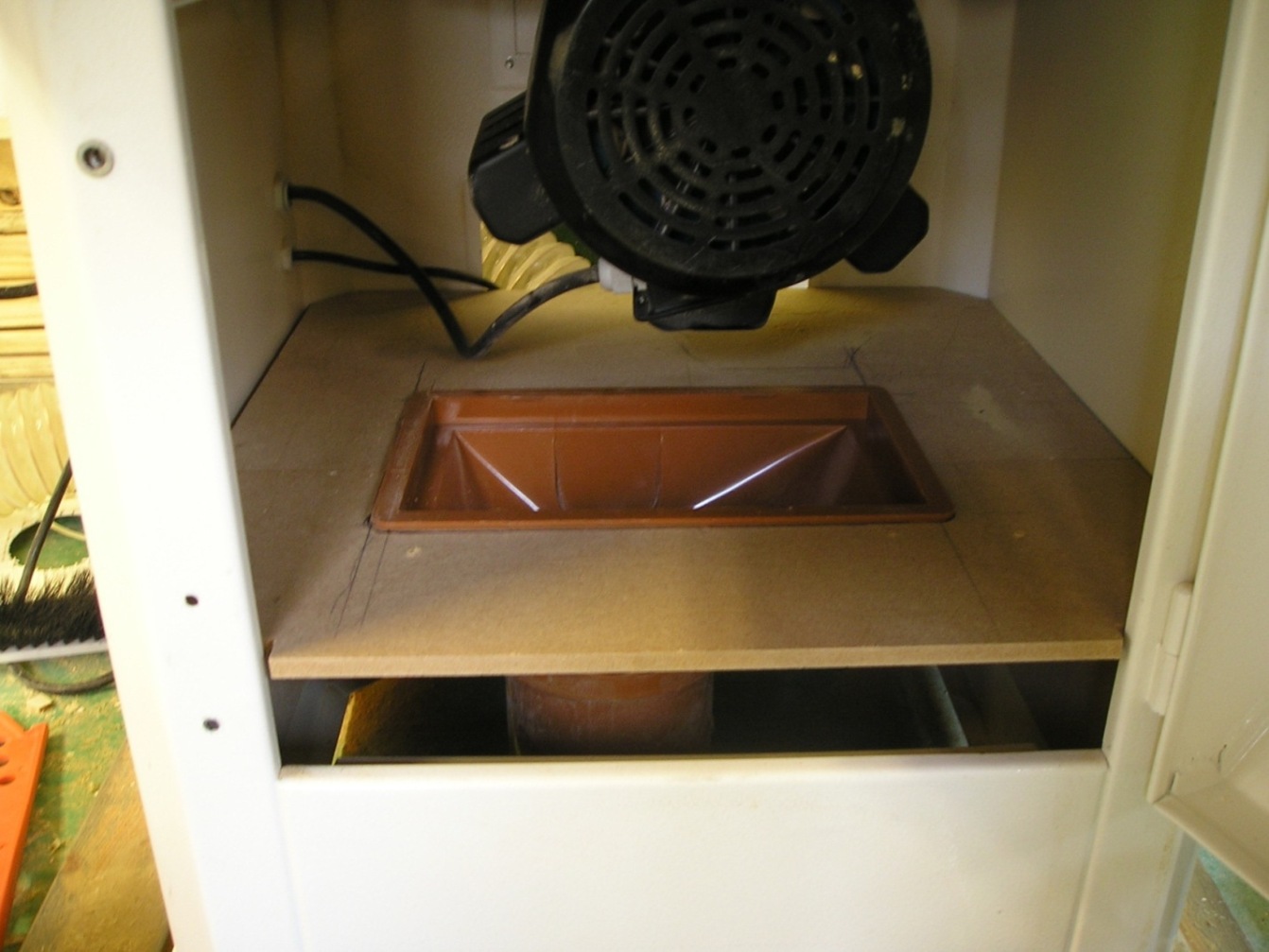 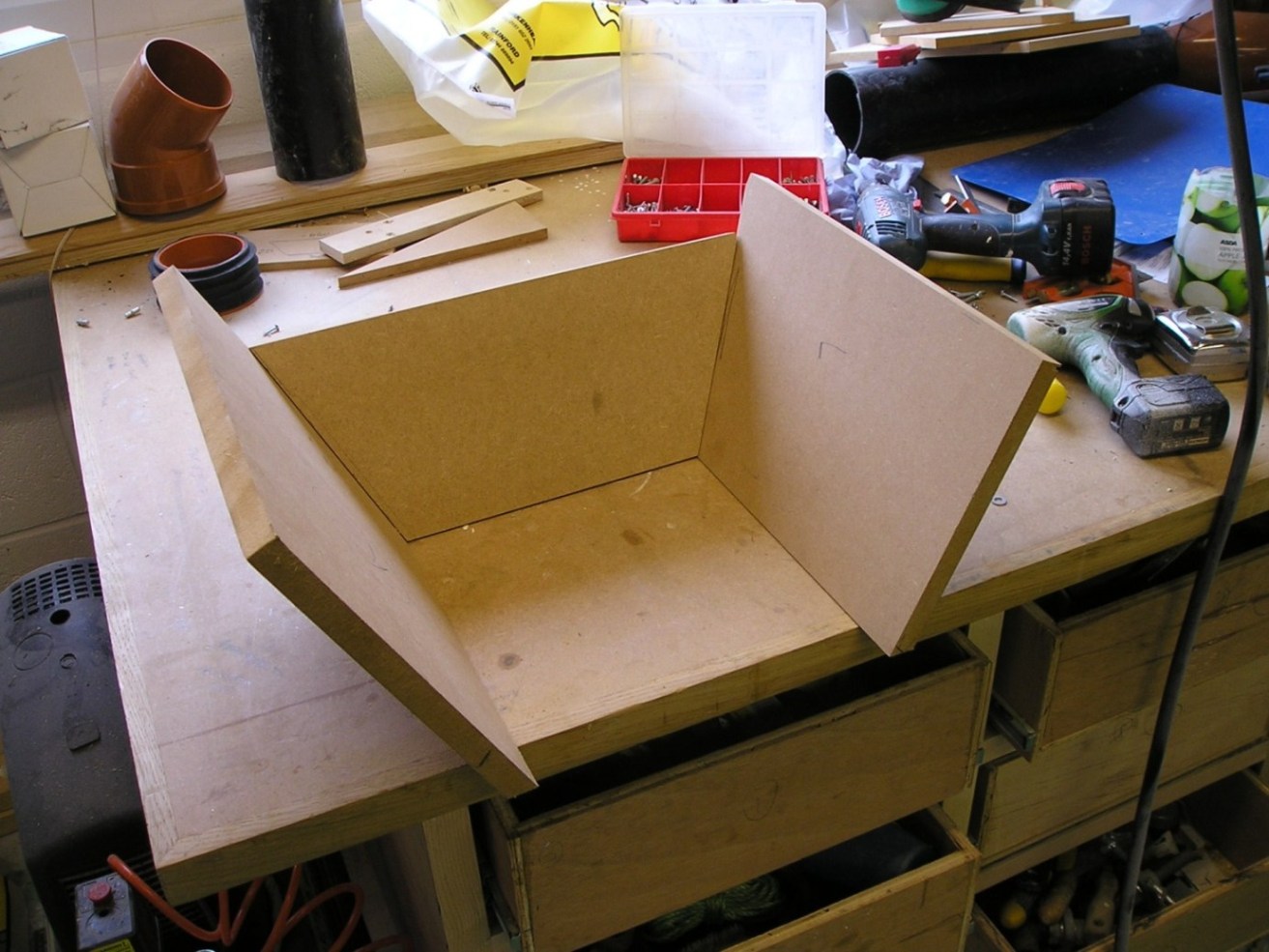 And assembling it inside was a bit of a nightmare. 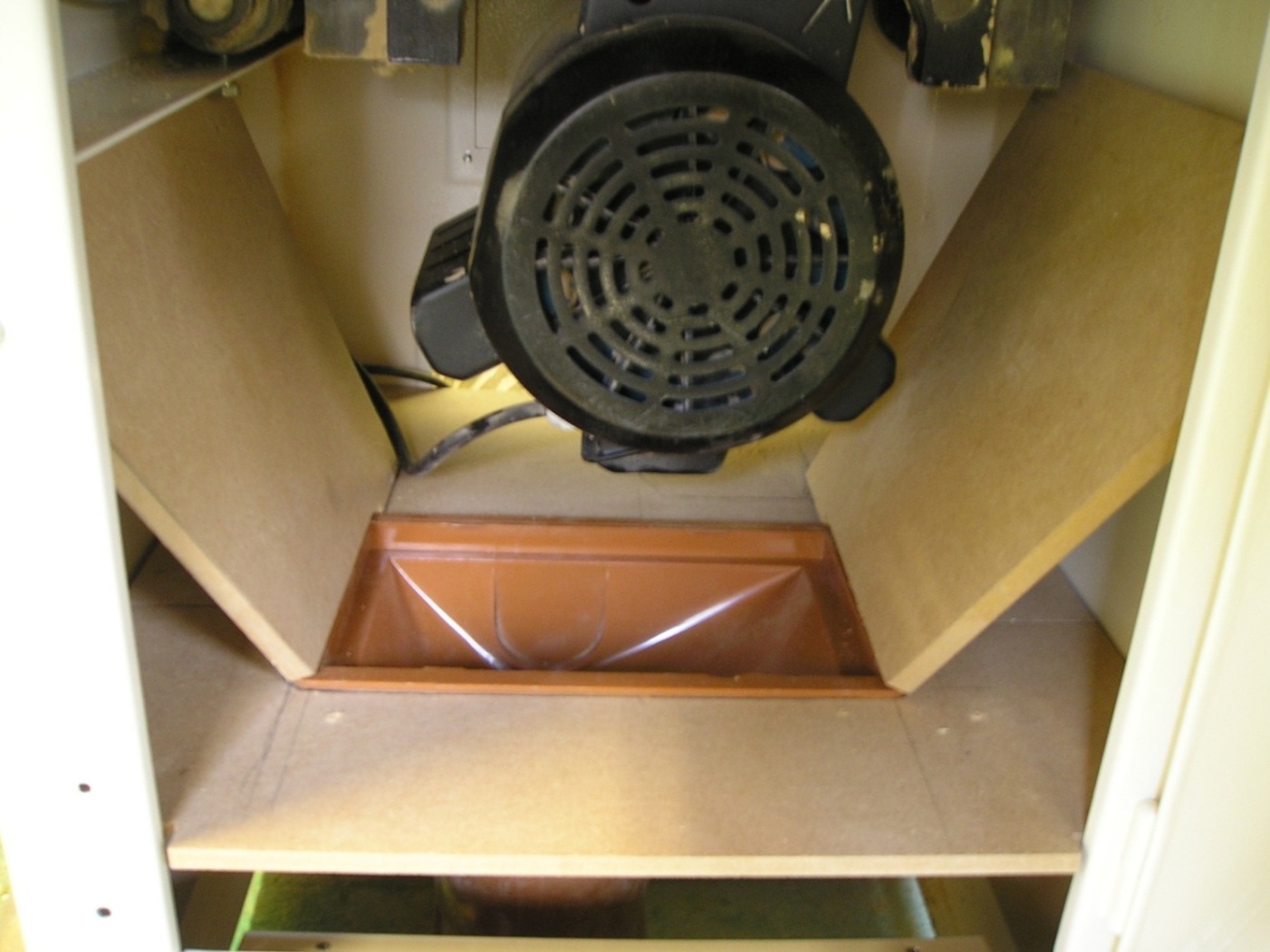 The right and left hand sides went in ok... but the motor prevented the 3rd side from being the same height, due to it moving when you want to tilt the blade . So it had to be lowered by 3" from the photo below. 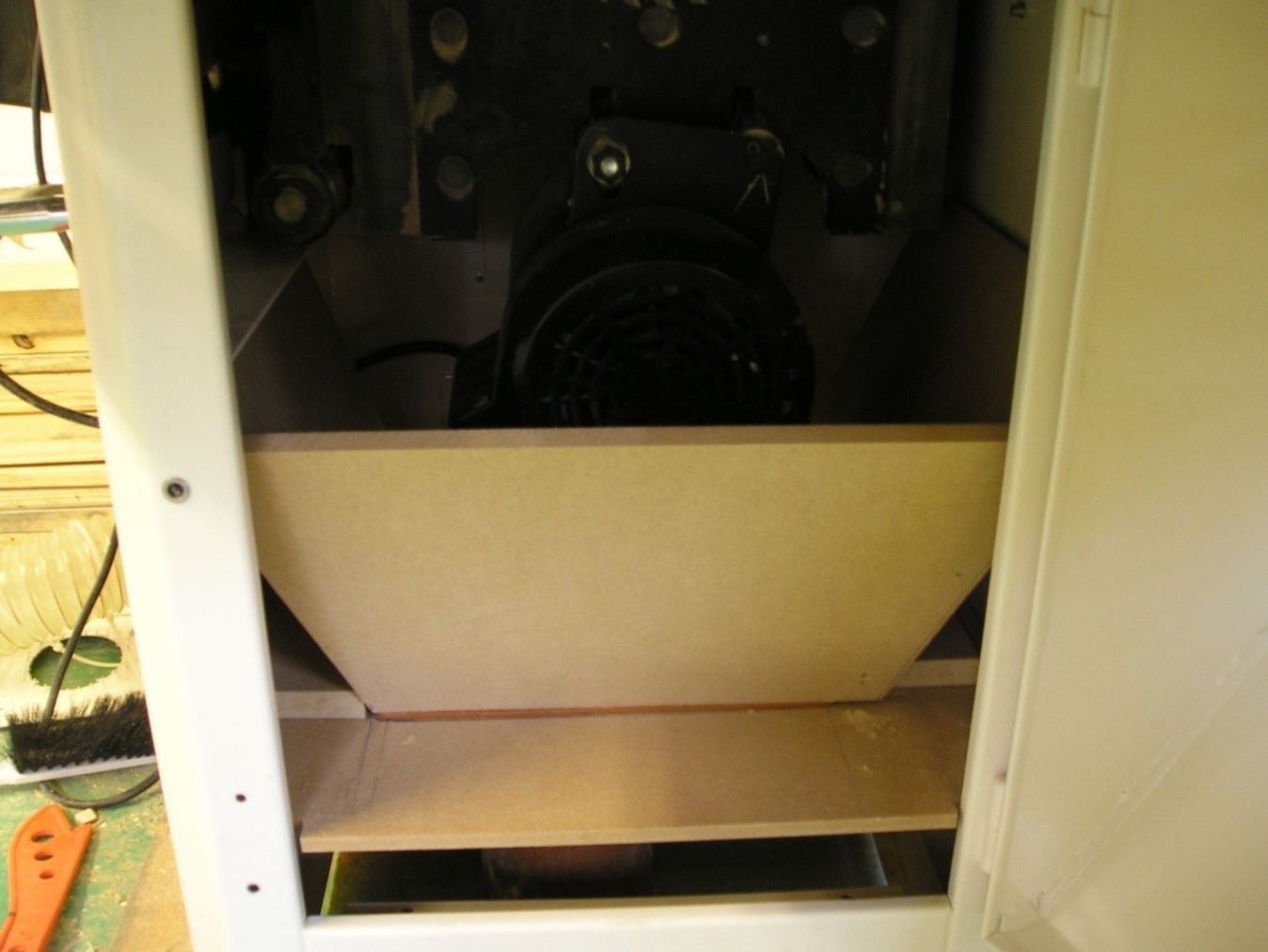 At this point about 95% of the dust was being captured.
A flexible sheet was needed to be suspended from the inside top of the cabinet allowing the motor to move freely to 45-deg.
A quick look around the kitchen revealed the lightly candidates, my wifes chopping boards.
With some friendly negotiation she conceded 2 of her 4 boards with the promise of replacements. 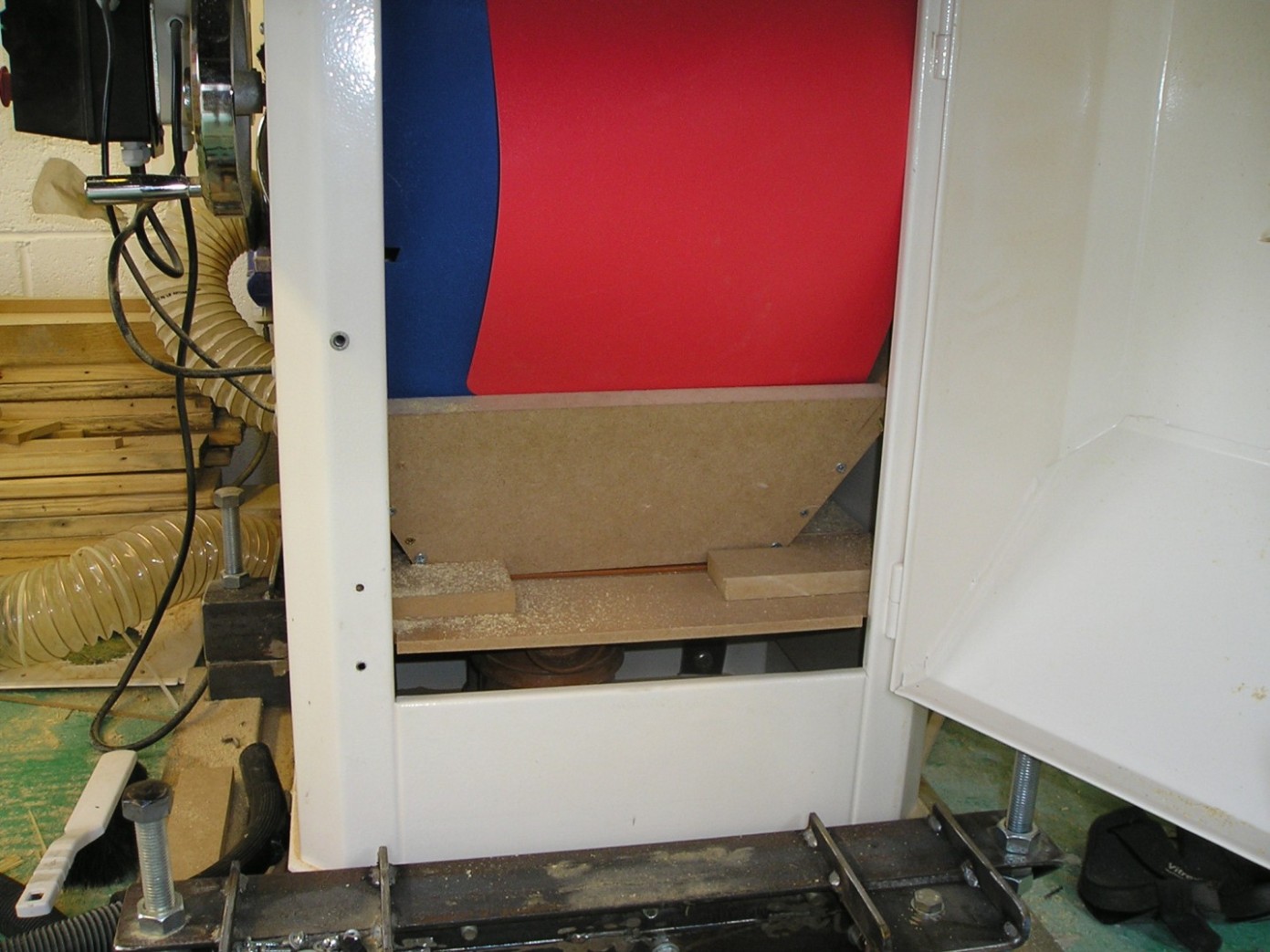 The chopping boards worked a treat with all but the very finest particles going into the extractor.
Removing the blade insert from the table top and blowing it all out with an air line sorted that out.

Quite a basic little job but it's made a big difference.
I hope it helps a few of you.
thanks Kev

My SIP needs a similar sorting when I can find time and, being a builder I have surplus drainage fittings available
The only query I would have is the use of a trap rather than just standard bends. Does the sawdust not collect in the trap and potentially block it?

Thanks for the post - definately has set the motivation juices flowing :lol:

Thats very impressive. I can appreciate how hard it must have been to work inside the cabinet.

I have to say since upgrading to the 3hp extractor (the same one you have I think you said earlier?) I don't get any dust on the floor below my SIP 10" table saw anymore. Before it used to pile up and up and up.
S

Thanks for that chems.

Bob.
No the dust doesn't appear to clogg the bends at all.

if it does prove a problem, then i'll make some kind of modification and sort it.

Do you think it's really necessary to use the cutting boards? A little dust left inside the cabinet isn't going to hurt anything, and you probably won't have to suck it out with shop vacuum more than once a year. And you'd probably be better off getting in there yearly anyway just to clean and lube the blade tilt and raise gears.

Yeh i have to say you are right, but to my own detriment i have a strong perfectionist streak.

I lived in the States for the 3yrs in Lake Placid Upstate NY. Toolwise, we are still stream powered in the uk compared with you.
Carpenters still use something called a hammer to drive nails

Looks great. I was trying to do something similair with my Xcalibur t/s, but not having your perfectionist streak I took the easy route and added greater suction by upgrading the extractor and using 6" ducting. I did, however, stuff some excess loft insulation in the gaps between where the t/s top meets the cabinet (big source of leakage on my saw).

I see your reasoning now Kev

Easier for me as I have some pipe offcut plus straight and bend fittings so can achieve it without problem. Might even have a hopper somewhere though that's the cheapest bit of the drainage - those traps ain't cheap!

Good to hear from you.
Those hand painted kitchens you make look pretty close to perfect to me.

What extractor have upgraded to now?
I saw your post showing the mods you'd made by blocking off the top bag and placing the extractor above the cyclone. Sounds like it was a good move.

ScouseKev":vs5sq7vv said:
What extractor have upgraded to now?
I saw your post showing the mods you'd made by blocking off the top bag and placing the extractor above the cyclone. Sounds like it was a good move.

It's still the Axi 2200 (no longer available), but putting 6" ducting on it made a huge difference. I don't have crown guard extraction the t/s but still very little dust escapes. Very pleased with it.

Before you made this modification were you getting any dust coming up with the blade onto the table top (not sure if you have a crown guard extraction point) and if so has your modification reduced / eliminated it?
S

Yes quite a bit of dust before this mod was done but this has eliminated a good 75%.

i may try a zero clearance insert at some point, but at the moment i just have extraction on the blade guard.

12 May 2022
AFFF
A
F
What material for fitted office upright dividers?