I came across a video on youtube of someone making a spiral Christmas tree:

and thought I'd give it a go. Presumably the author doesn't have a lathe, as they use a bandsaw to make the initial spiral. I also don't have a lathe, but didn't fancy trying their bandsaw technique either, so I wondered whether hand-shaping it with rasps would work.

I wasn't sure how well this was going to go, so I just raided the off-cut bin rather than getting wood specially for it.

Any off-cut large enough to make a spiral Christmas tree has long since become a reindeer, so I cut up what I had into strips, to glue together to make a stripey tree. Beech and ash aren't really a great combination for this, but it's what I had, and as I had no idea how it would turn out, I just charged on regardless. 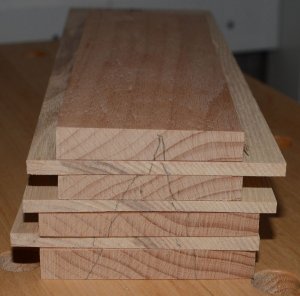 Some of the offcuts were longer than others. I added some pine in the overhanging area, so that I could clamp that end in the vise while shaping.

Then I started off by cutting it into a pyramid shape. 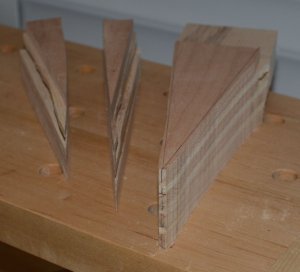 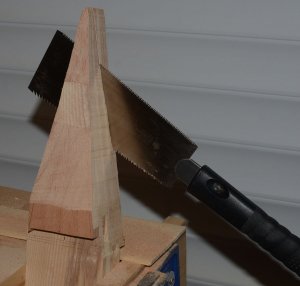 Then I used a 9" Shinto saw rasp, mostly on the coarse side, to get it into a roughly conical shape. This was my first time using a rasp, so I'd deliberately left myself a lot of material to be removed so that I could get the hang of using it. If I do it again, I'd definitely take the time to work out where I'd need to cut to make an 8-sided pyramid, though, as that would have made the process take a lot less time. Although the picture show it pointing to the right, I (being right-handed) found it easier to do when pointing to the left, so did most of the shaping that way. I cut some circles of different sizes out of card to get an idea of how far off circular I was - although in the end I didn't really bother getting it very circular: With the circles on you could see it was way off, but without the circles to reference to it looked perfectly fine in my opinion. 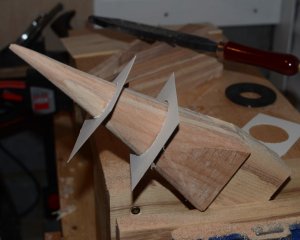 I was pleasantly surprised to find that my flattening and glue-up hadn't left any voids; so far so good!

I marked the spiral on the cone, and used a half-round 150mm No5 48tcm rasp to get the spiral started.

However, I found that rasp slow to remove material, so I went back to the Shinto to do most of the removal However, that didn't leave a crisp edge, so I did the final shaping with the No 5.

Then, declaring the spiral complete, I cut it off of the base. I think that the video shows the final result as hanging ornaments, but I thought I would prefer it to be free-standing, so I cut a circularish shape out of a walnut offcut, and planed it flat. I then attached the spiral to it via a short section of 19mm dowel. Titebond original seems to have worked well enough, despite all the endgrain; if it falls apart I'll epoxy it back together.

That just left finishing. My notes advise against using danish oil for both ash and beech, so I went with some clear matt varnish (as that's the only other thing I have). Unfortunately, this didn't go well. I don't really know why, but here it is after the first coat: A few iterations of "sand then varnish again" later and I declared it good enough: Not perfect, but I think respectable enough. I think I'll give it another go some time when I have some suitable walnut and ash offcuts, but I'll stick to danish oil next time!

M
Going around ever decreasing spirals until disappearing up.........
2