Another day, another joint that is new to me. Wedged double through tenons. Or is it twin tenons? To use shotgun parlance, side by side rather than over and under.

So I start off with my usual fine quality timber 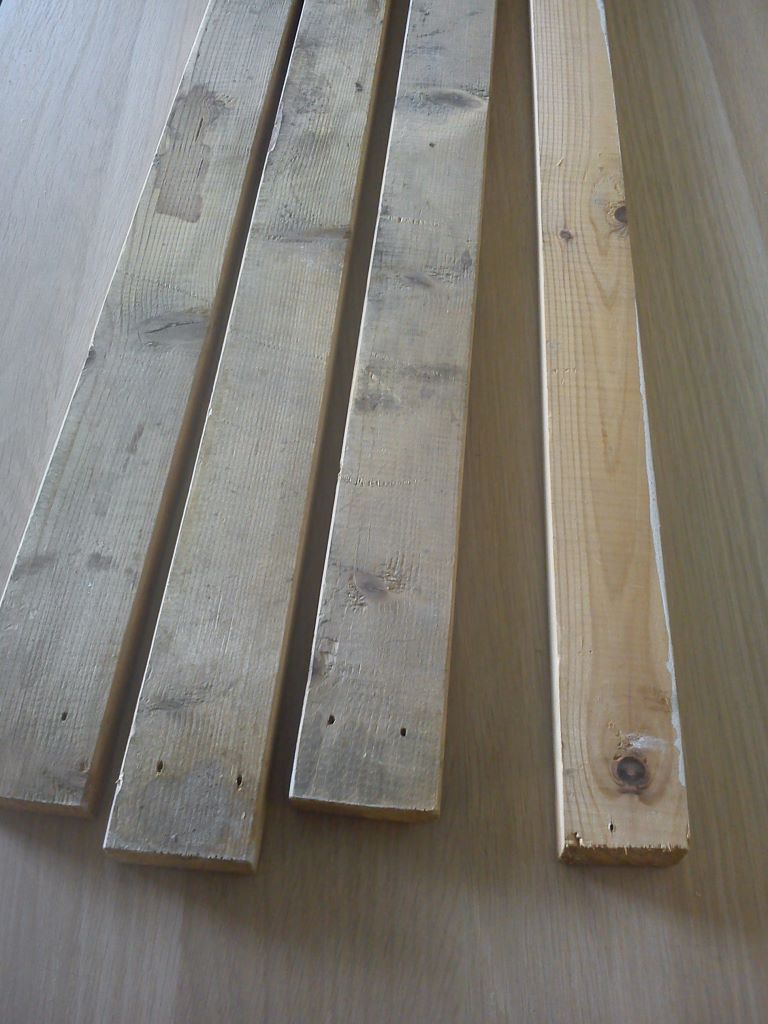 This was out of a linen cupboard that we are turning into a larder. Plus an old floorboard that, for some reason, had some 50mm dia holes drilled in it.

My design (if such it can be called) called for three pairs of double through tenons with a connecting haunch (the pictures later should show what I mean), two pairs of slots for intermediate shelves, and a back to be rebated in. So I needed to make some tools. 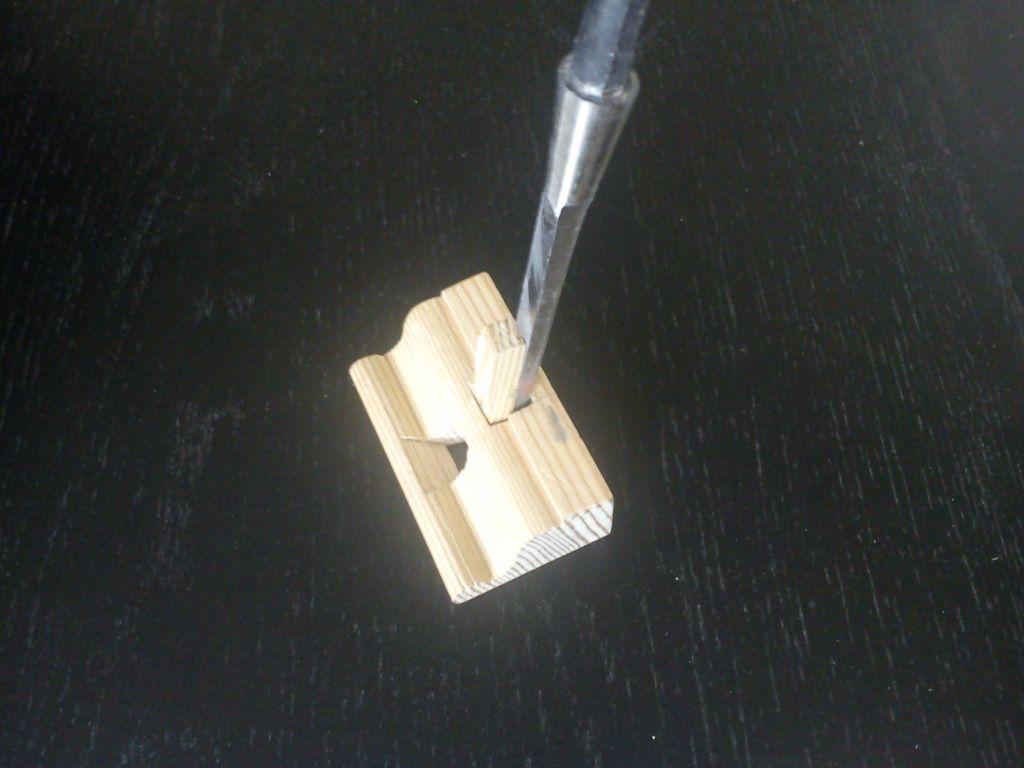 And a rebate plane. 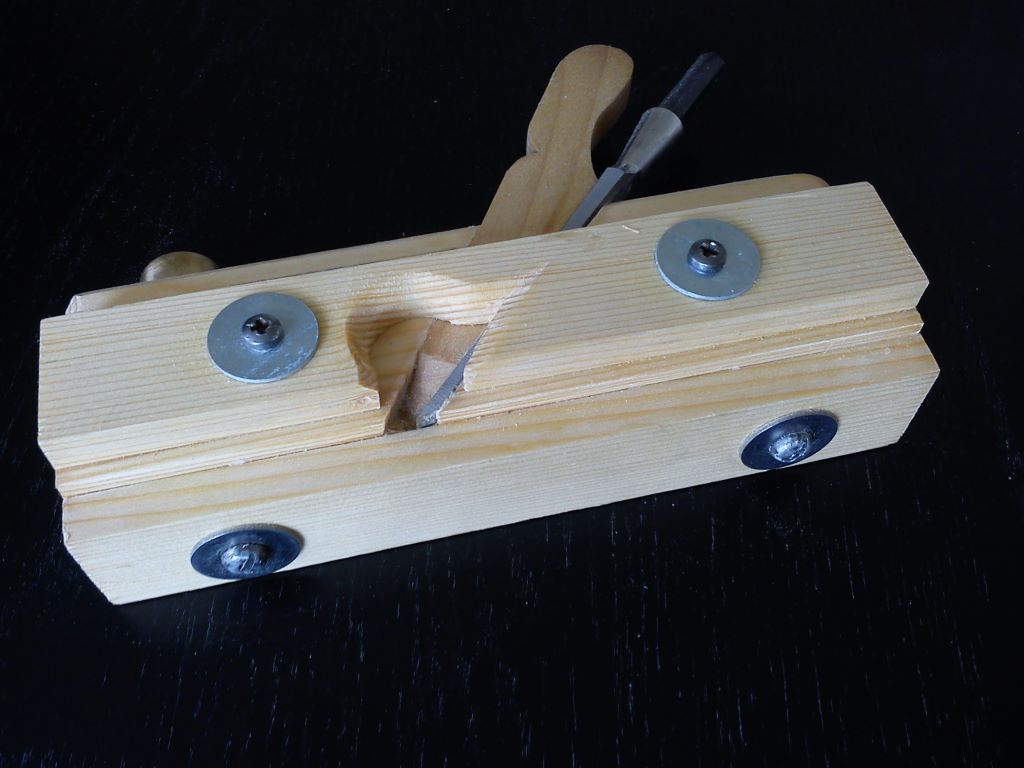 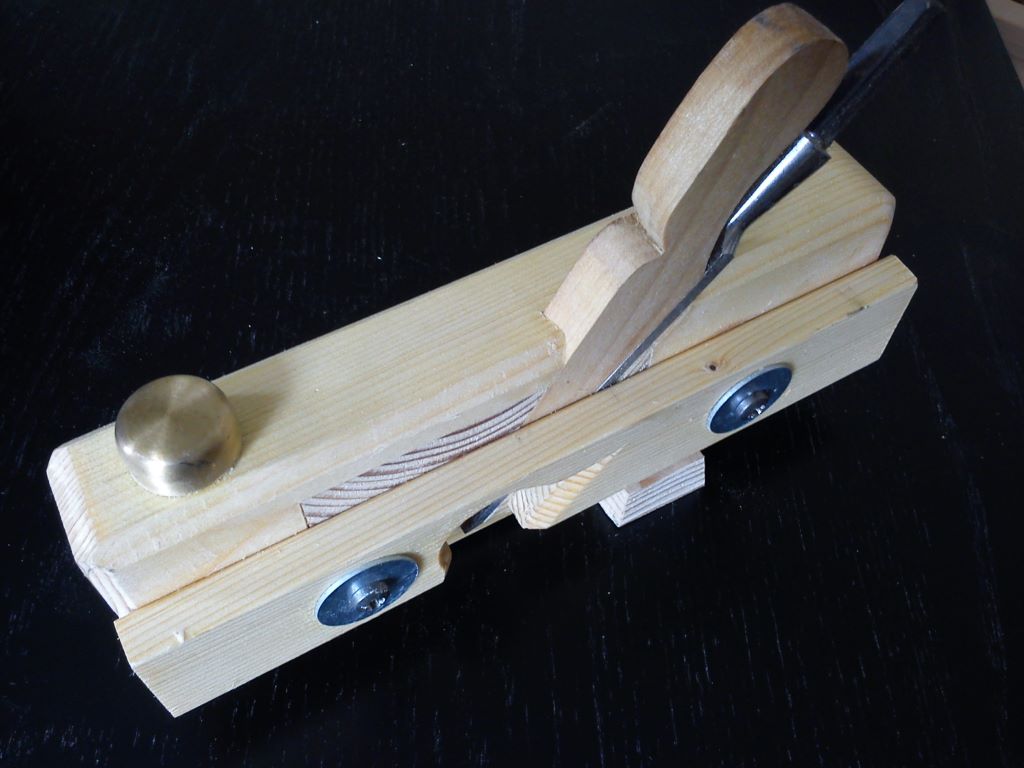 Ignore the bit of cross grain wood showing through the body. It was part of a practice mortice and tenon joint for my work bench, and it was just hanging around doing nothing.

Sooo, much edge jointing, planing, rebating and routing later we have the following set of parts, being pre-finished. 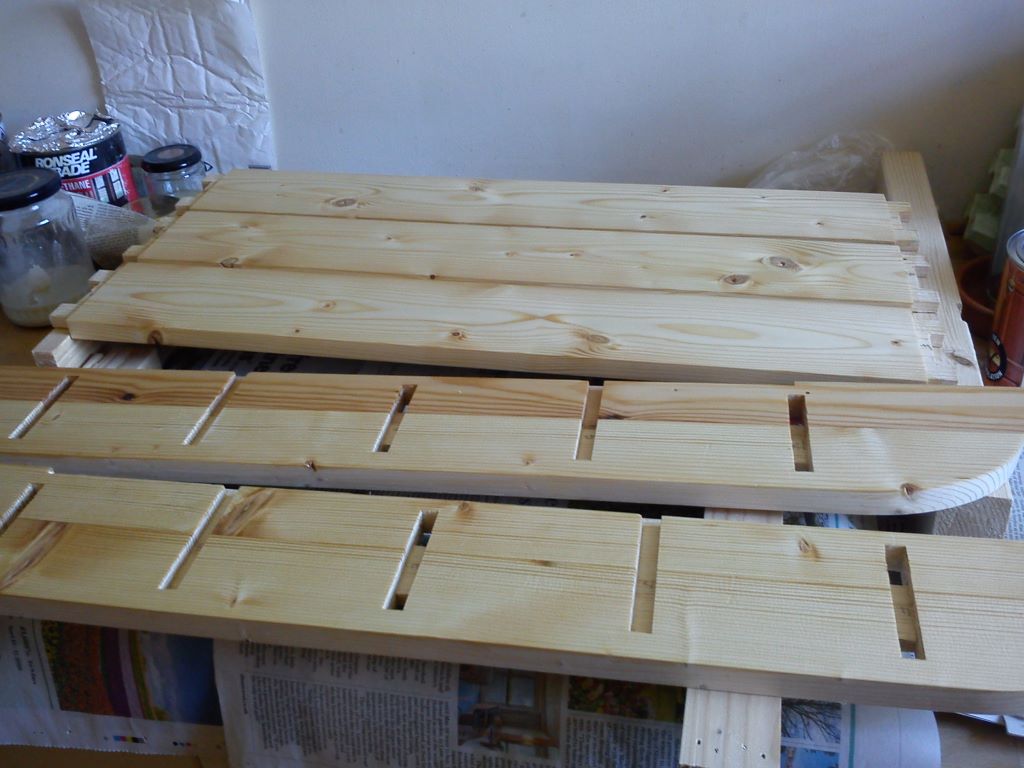 This is a detail of one of the double tenons 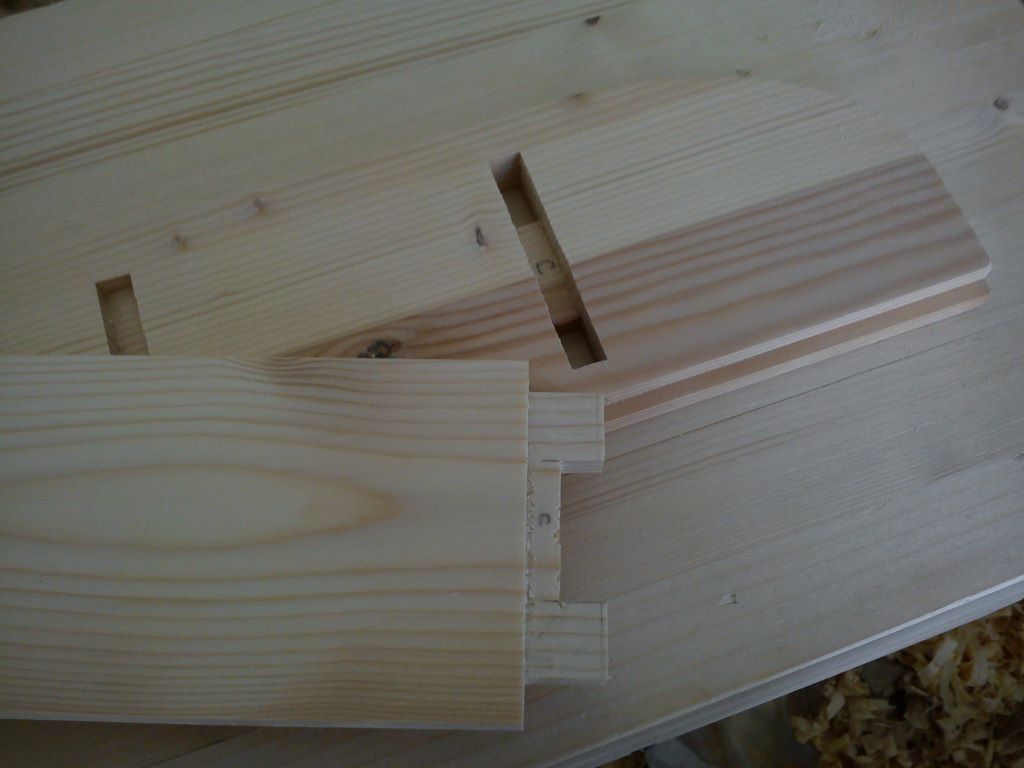 Now I needed to cut the diagonal slot for the wedge. Out of possibly the scrappiest bit of wood off cut I had (which is saying something) I made a jig that slotted over the haunch, to give a guide to cut an accurate (hah) diagonal. 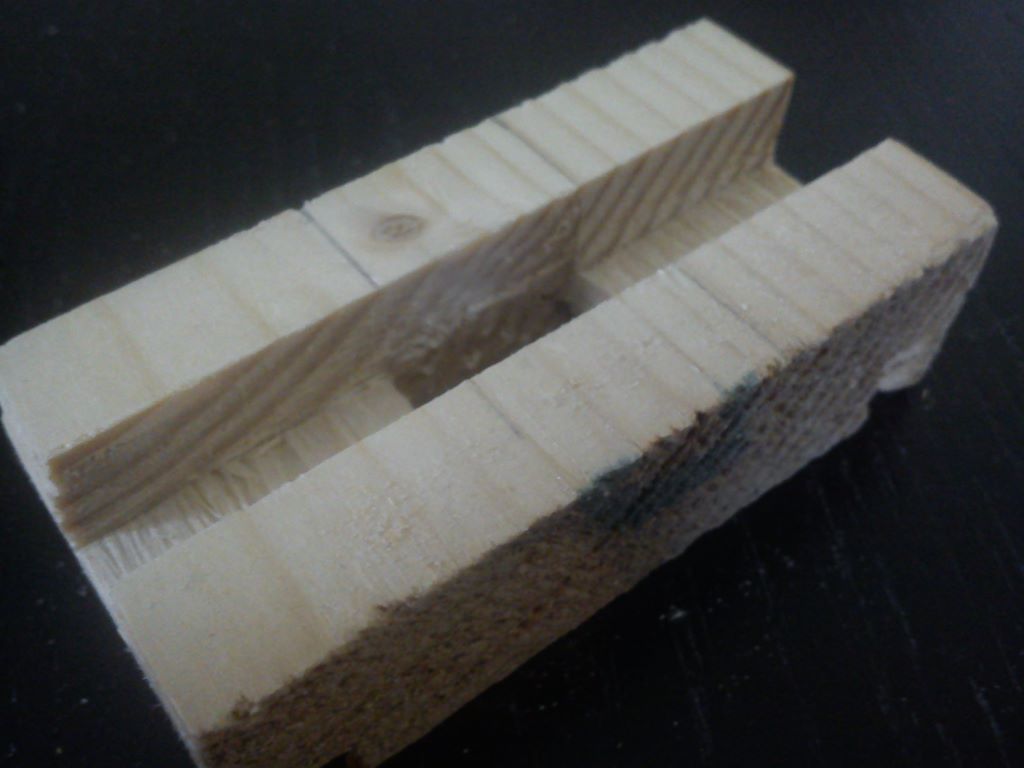 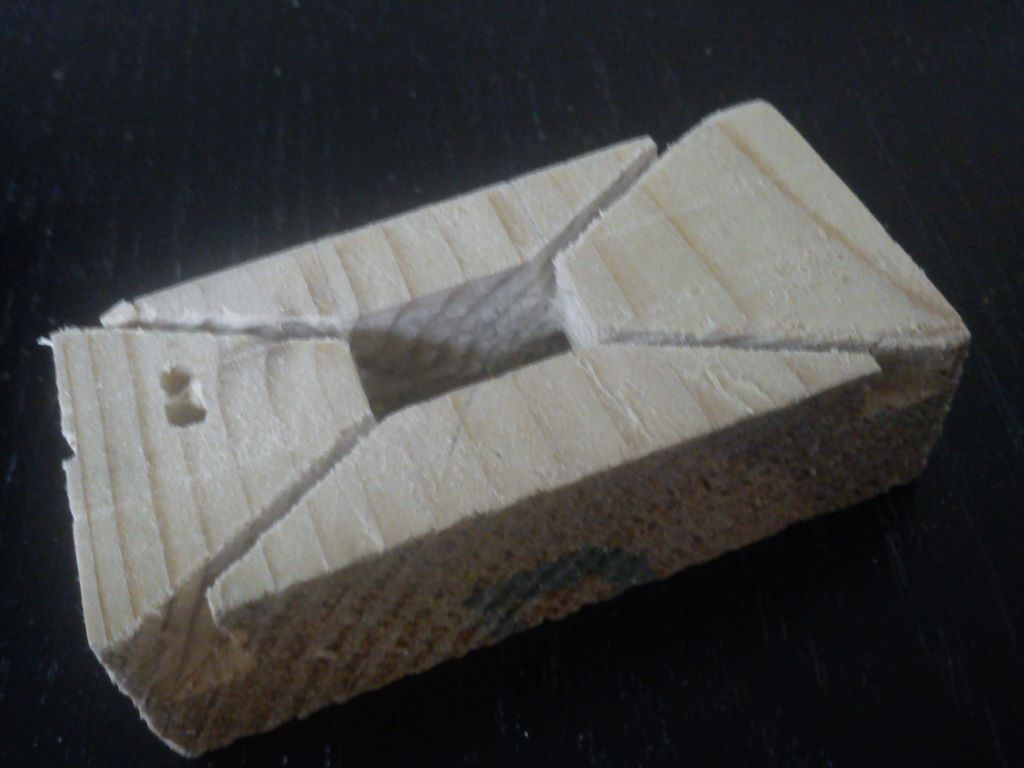 And I needed some wedges. These are from a teeny tiny scrap of plum wood. 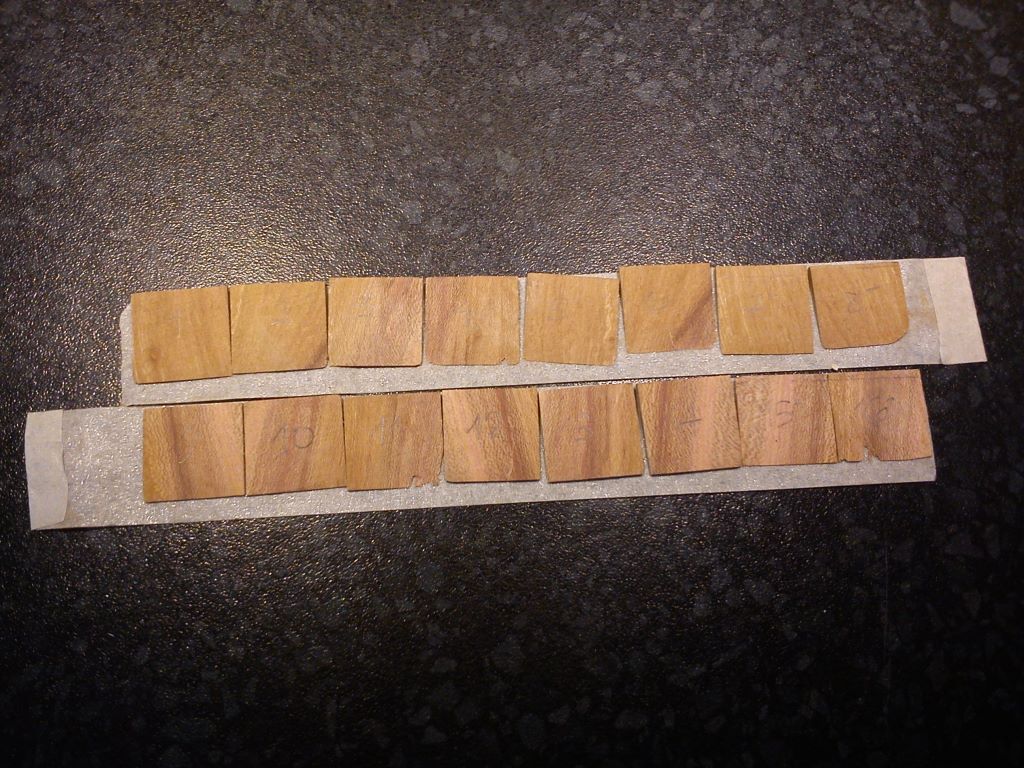 And then there was a glue up. Clamps, glue, knocking in wedges. No photographs. But eventually... 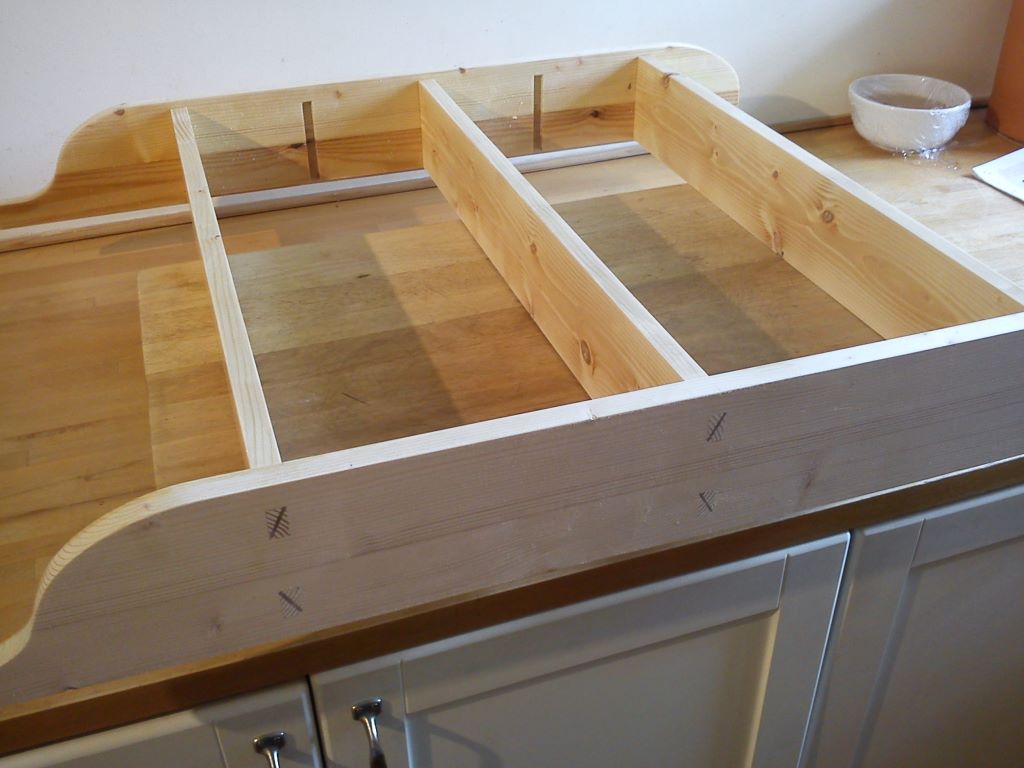 Nicely done. I like the way you make do with what you have rather than splashing out on expensive gear. What woodwork is about really. The wedges on the diagonal are a nice feature.
Regards
John

Superb, Phlebus. That's proper woodworking. I love your homemade tools, which are very similar to mine (I wonder if your chisel should be at a lower angle in your router plane?).

very nice joinery on this, that is superb =D>

Orraloon":p79gt52j said:
Nicely done. I like the way you make do with what you have rather than splashing out on expensive gear. What woodwork is about really. The wedges on the diagonal are a nice feature.
Regards
John
Click to expand...

And you don't want to know how much thought I wasted on whether the wedges should go through the growth rings, or with them...

MikeG.":1m0sktsp said:
Superb, Phlebus. That's proper woodworking. I love your homemade tools, which are very similar to mine (I wonder if your chisel should be at a lower angle in your router plane?).
Click to expand...

That is very kind of you to say so. I think I just got lucky, and my various errors cancelled out.

As far as the tools go, someone on here (it may even have been you) once said 'a plane is just a mechanism for presenting a blade to a surface at a consistent angle'. I possibly paraphrase there. And that is all I have made. I have made prettier tools (I think I put some photos of a block plane I made on here, but I don't know how to link to it), but then I get worried about spoiling them by using them. Which is pointless.

As far as my router plane (if it can be so dignified) goes, I had read somewhere that one variant of an old woman's tooth plane was meant to work with a scraper action. I did actually try three angles (just by drilling appropriately angled holes through a bit of scrap). One (that I ended up with), one as low as possible, and one somewhere in between. The angle I finally used produced the most reliable results in the circumstances (narrow recess, sides already sawn, cross grain, bulk removed with a chisel). Not intermittantly the best, that was the lower angle (particularly if the blade could be skewed or used with a slicing action), but the most reliable. And lest you think that is too much faffing about, it took less time than it has done to type this, which I have done in case it is of use to anyone doing similar.

thetyreman":2ug25ufz said:
very nice joinery on this, that is superb =D>
Click to expand...

Thank you. As I said to MikeG, I think I just was lucky in this case.

But can I add that, as someone with very little experience in wood working, it really is encouraging to get comments like this. What was the quote? 'I love criticism as long as it is unqualified praise'. Noel Coward, I think. who probably didn't do that much joinery.

thetyreman":lx8xck7a said:
very nice joinery on this, that is superb =D>
Click to expand...

Nope. You set out to do proper joints. Just in doing that, never minding the quality of the execution, you elevated yourself above 95% of the stuff that is made by hobbyists these days.

thetyreman":3d1etklk said:
very nice joinery on this, that is superb =D>
Click to expand...

Nope. You set out to do proper joints. Just in doing that, never minding the quality of the execution, you elevated yourself above 95% of the stuff that is made by hobbyists these days.
Click to expand...

+1 I agree with mike, I waited a lot longer before tacking through mortise joints with a dado and diagonal wedges, it's quite a step up from just a regular dado, it takes very high precision and skill to pull it off.
C

Superb job! You're what a hobbyist woodworker should be like!

Well, after a mild hiatus (s'ok, it's better now) I have pressed on and finished this shelf unit.

I think I left it after the main glue up. So the next thing was to insert the intermediate shelves - these are in stopped housings, with a shoulder on the shelf, so they just slottted in from the back. I think you can see the joints from one of the earlier pictures. So here we are: 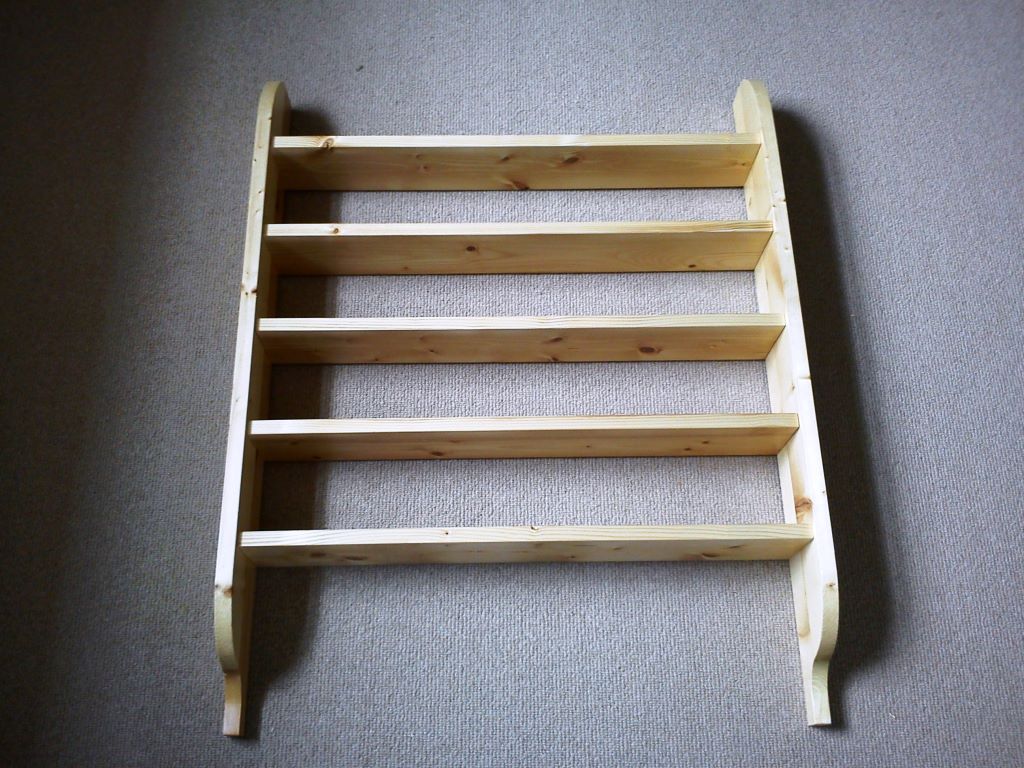 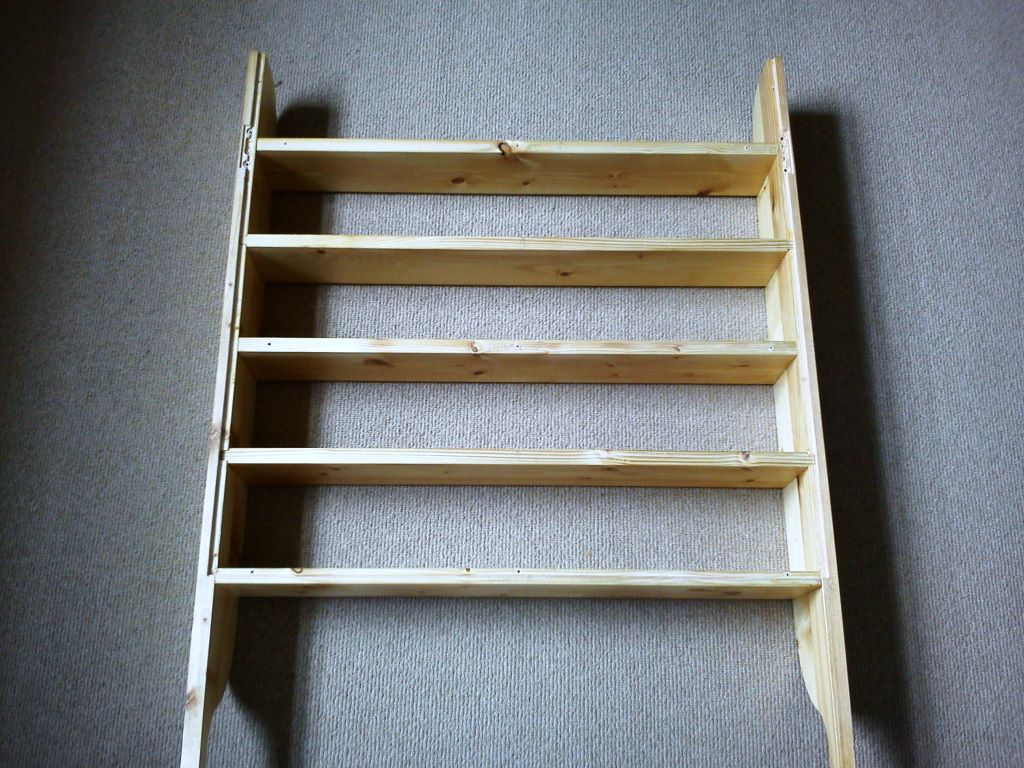 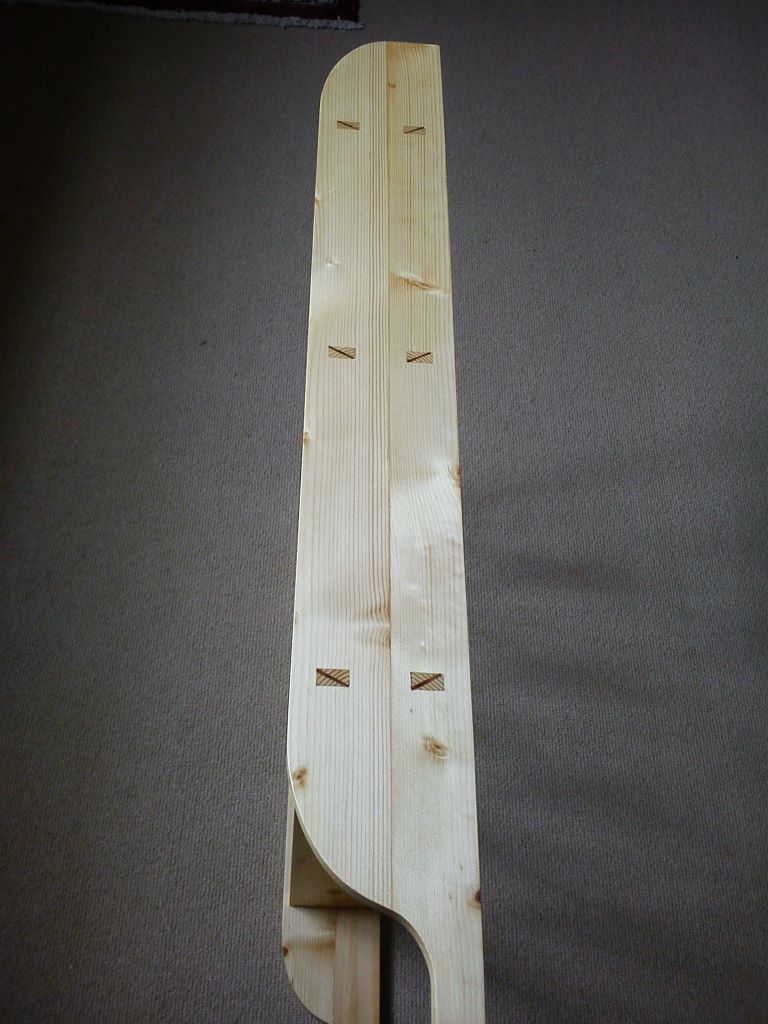 Now it need a back. At last a use for that sheet of plywood that's been hanging about. Simply held on by brass screws. Which I actually had to buy. Most expensive part of this project. 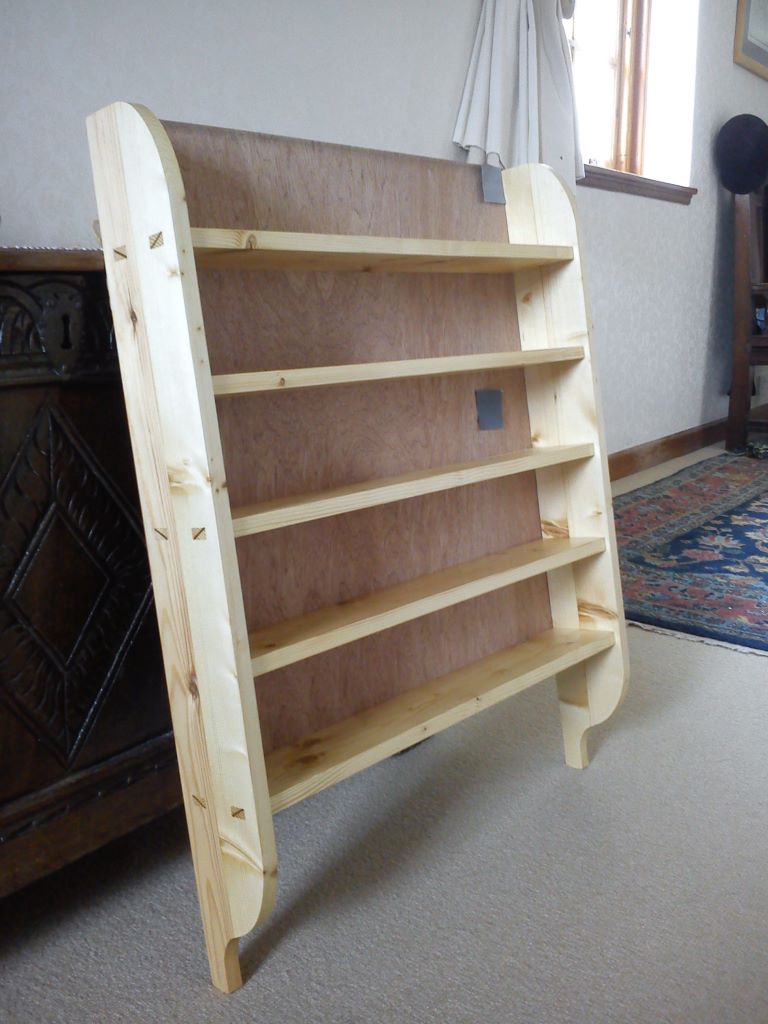 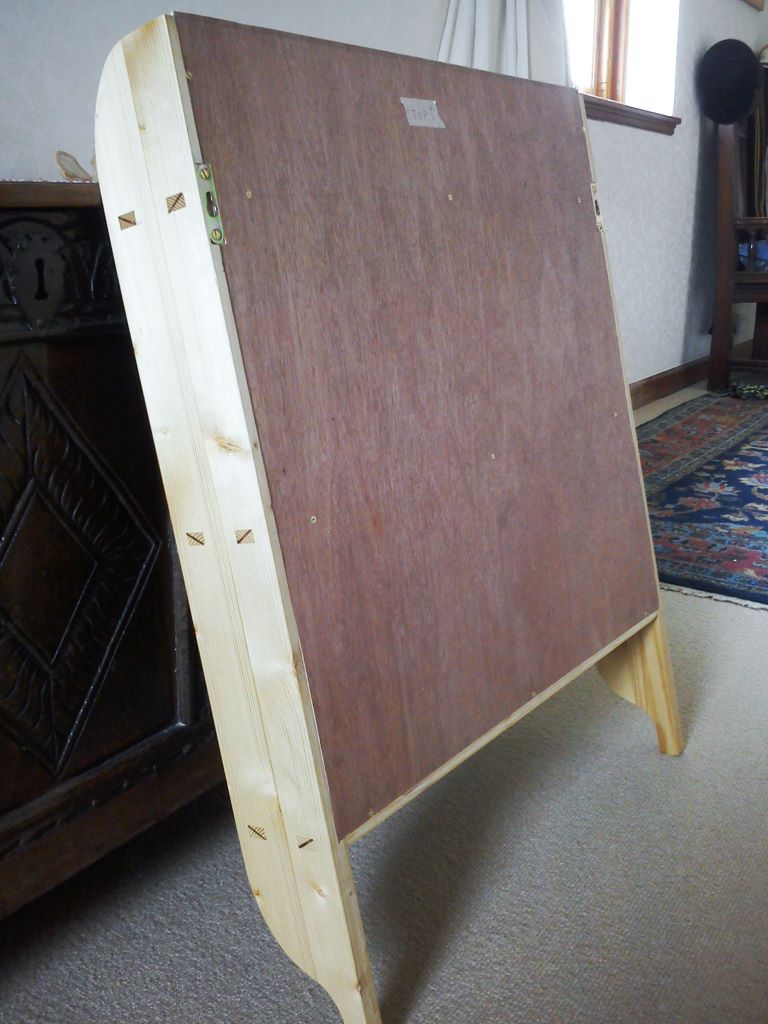 Because this is only ever going to take light loads and I didn't want the fixings to show, I used two small brass keyhole slotted plates, recessed into the back. 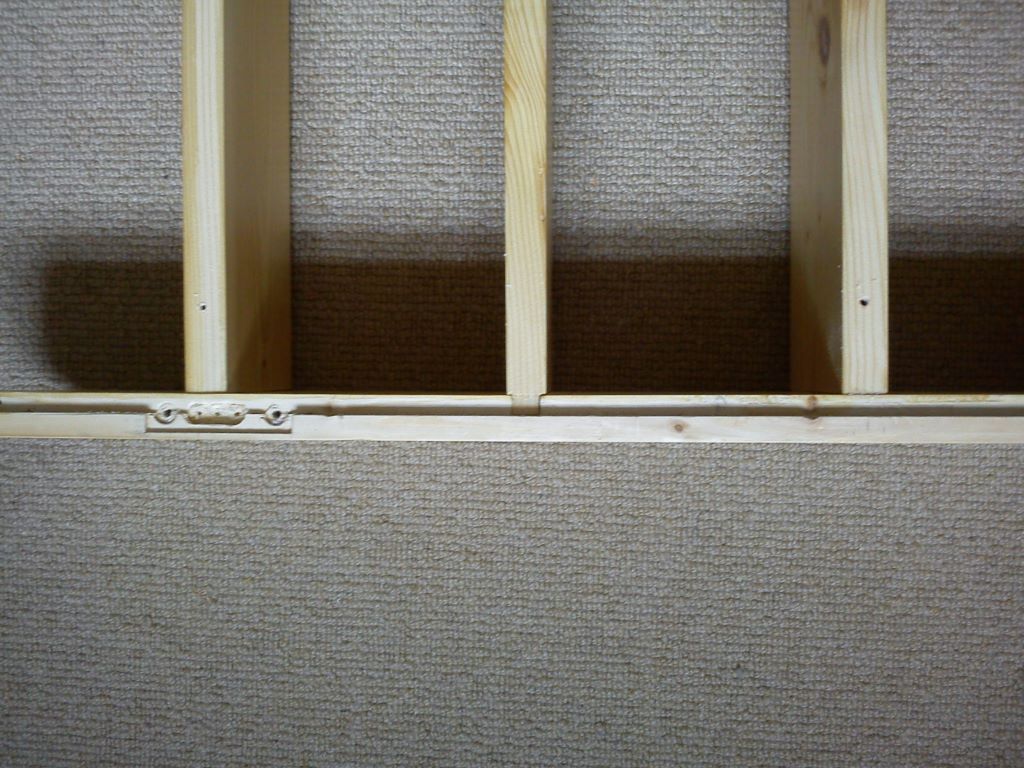 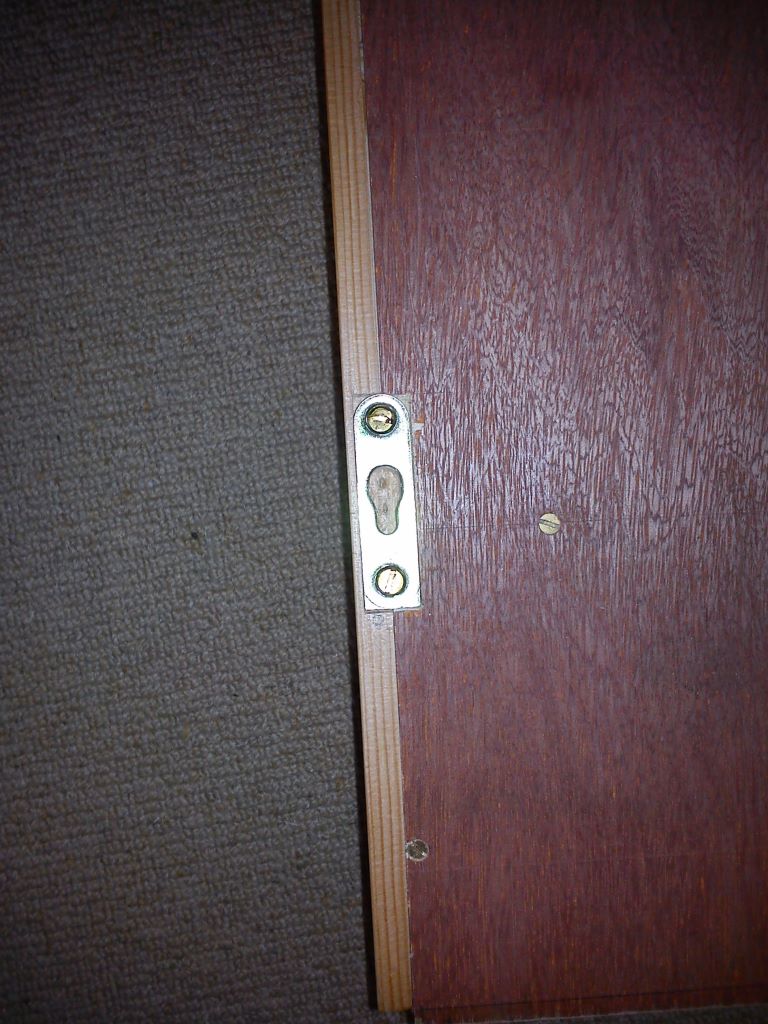 Finally I painted the back (well, obviously, I took it off again to do so), and put a coat of paste wax on the plain wood. Resulting in this: 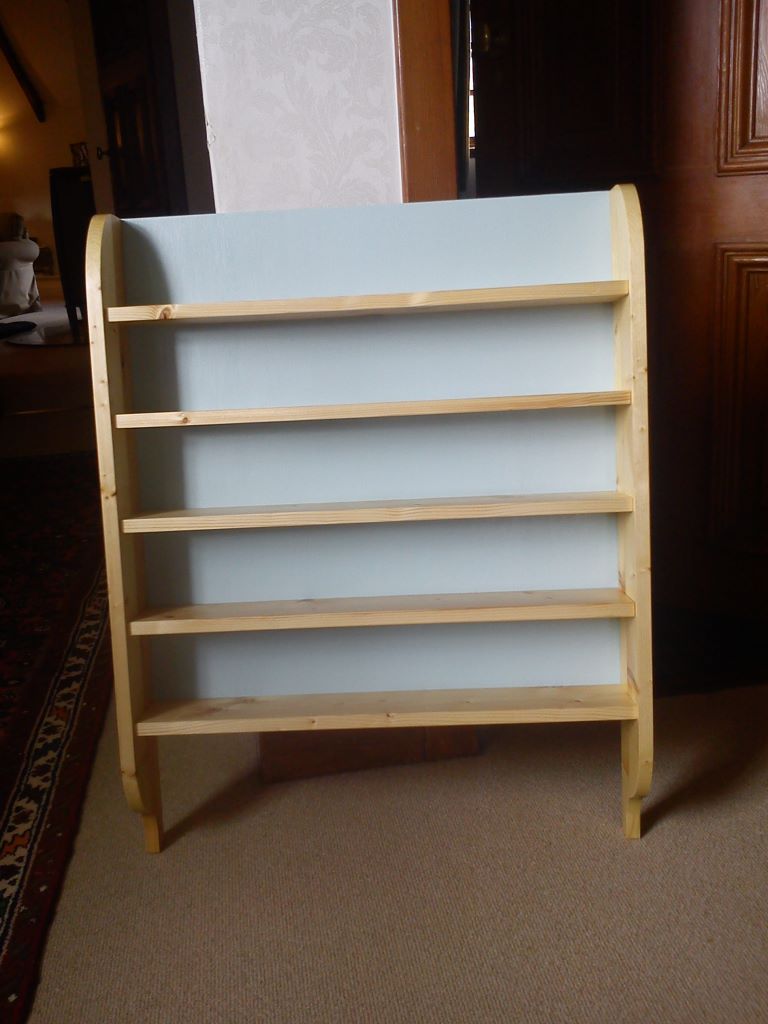 And here is it in situ: 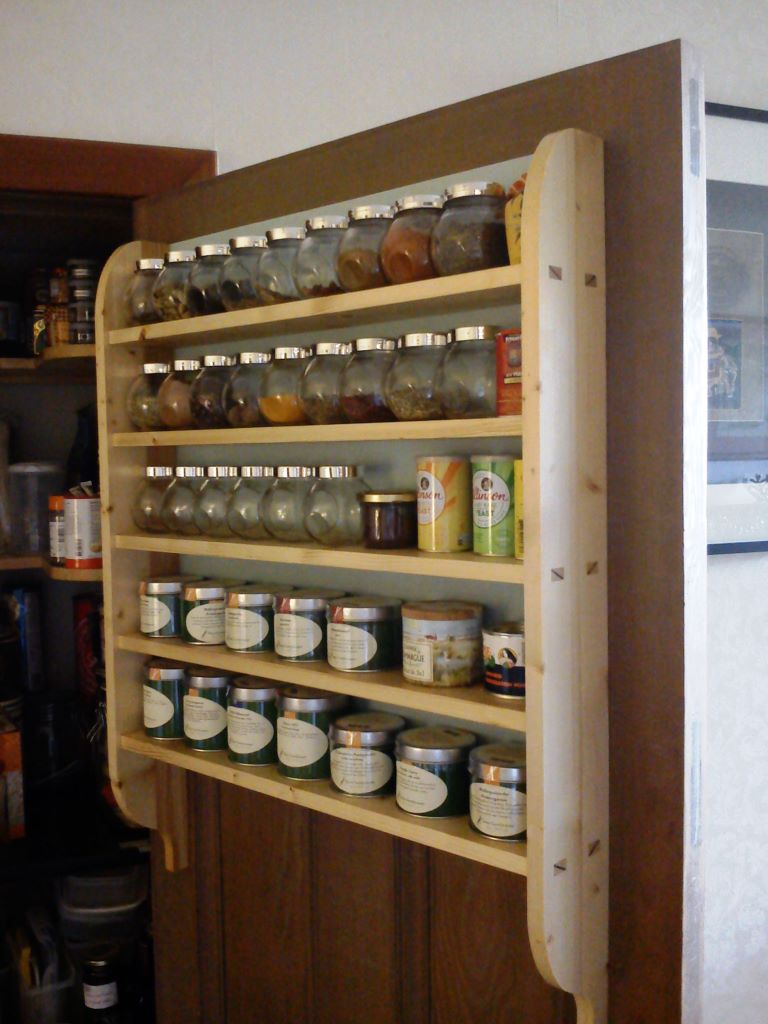 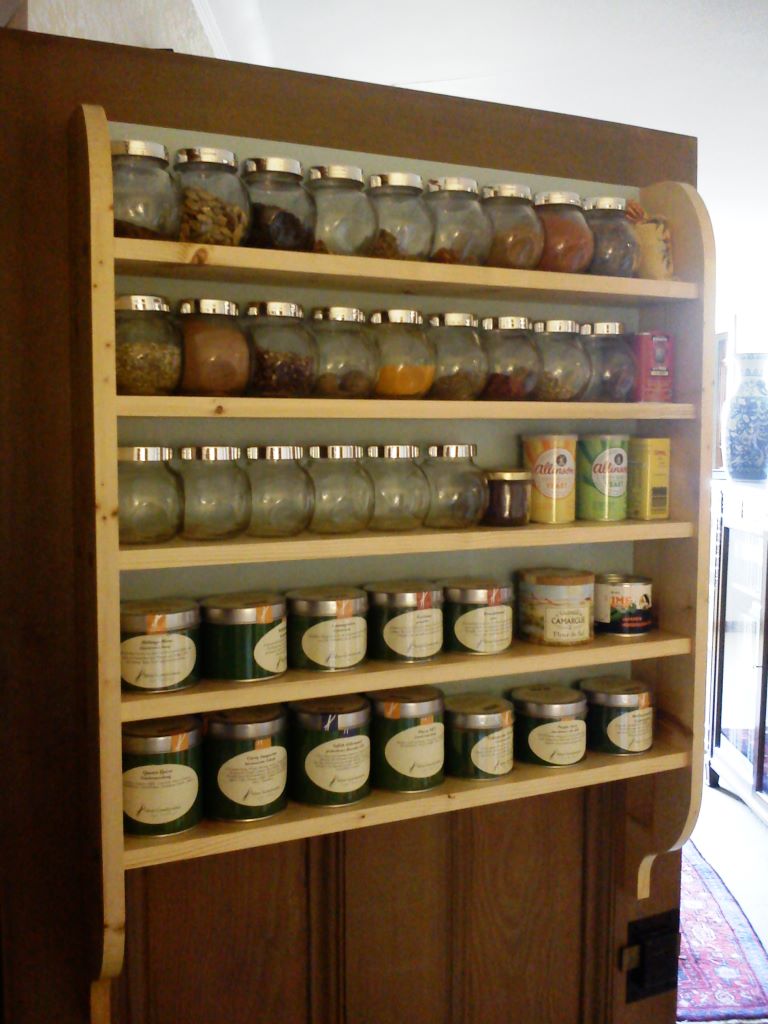 There are two things I think I may add - a narrow wooden rail along the top of the plywood back, to balance it out, and possibly some small rails pinned along the front of the shelves in case anyone slams the door and all the jars come sliding off. The latter I'm pretty sure I will do, just trying to work out a profile that doesn't make it look to chunky.

On the whole I'm fairly pleased with the way it turned out. Now I know I'm not wholly useless I might even buy some wood for my next attempt.

A few lengths of 1/4 round will stop them slipping off.

Looks fantastic, I am envious of the joinery, wedged through tennons are on my list of joints to try, after seeing this project I think they have been bumped to the top!

Consider Phlebas, who was once handsome and tall as you.
Click to expand...

...and rather good at woodwork, and self-deprecating, and a good egg generally. I really enjoy your posts; thank you.

Consider me inspired to work with hand tools (eventually, when I have time).
S

It's a well executed project and the story leading up to it's construction provides "providence" (doubles it's worth no doubt too).

Was it necessary for the shelves to be pinned to the back to support the weight of filled jars?

I saw the plywood back and immediately thought that it was "out of character" with the shelves. However, you painted it and the "problem" is solved. Perhaps it would be easier to get as good a finish as you have - but with less effort, using MDF?

You have put the wall fixings beneath the top. That's good, and for shelves it's a good idea to not put the fixing on the top shelf. By putting it one shelf down (similar to what you have done) the fixing will hold the unit to the wall and the top will pull the bottom in - so no need for extra fixings etc.

The diagonal wedges remind me that a shelf doesn't always need a lip e.g. to hold a jar. Either you can omit the "lip" - does a jar move in the middle of the night so as to fall on the floor (no)? Or you might cut the shelf slots (and the shelf front) to be on a very slight gradient - to naturally hold jars etc. back against the wall, again without needing a lip.

Simon_M":3ioms6mp said:
I saw the plywood back and immediately thought that it was "out of character" with the shelves. However, you painted it and the "problem" is solved. Perhaps it would be easier to get as good a finish as you have - but with less effort, using MDF?
Click to expand...