Just got a small order from Rutlands (3 bottles of Titebond) and it arrived in a re-used Titebond box =D>
I'm used to getting orders in big branded boxes, mainly full of airbags - so this pleased me.

I get concerned about the volume of boxes trucking round the UK, now we all buy so much online - so it's good to see a box getting re-used. A small step but in the right direction.

If anyone else cares, can we all encourage the retailers to pay more attention to the carbon issues:

- re-use packaging
- use boxes as small as possible that fit the goods
- work with their carriers to reduce carbon footprint, encouraging them to use more efficient vehicles etc
- tell their customers what they are doing, to engender goodwill.

There's more to a retailer than price of course... range, service, convenience etc... and now we should add 'social responsibility'.

Good on you for raising the awareness Douglas. I'll bear that in mind when I place my next order. =D>
D

Whenever I send parcels I always re-use boxes. The last postbox I sold I re-used cardboard which I got from a florist, I only hope the recipient could smell rose's and soil or anything worse!

This is a subject that always Zilch-Wedlock me off, packaging!
I noted a few weeks ago that the governmennt has given a dealin to suppliers to reduce the amount of packaging in their products.
Today I purchased a small CD player for the workshop from Tesco, Iwas pleased to see that the protective packaging in the box was Papier Mache, like egg boxes, but why oh why do the 13A plugs have to come with a card backing around the pins, plus a plasric cover over the pins then a plastic bag over that lot?

Digit":17v0nn8l said:
why oh why do the 13A plugs have to come with a card backing around the pins, plus a plasric cover over the pins then a plastic bag over that lot?
Click to expand...

My guess is that the card has the wiring diagram on it in case you want to cut the plug off and use it for something else, and the plastic cover is there to make sure that you have to look at the plug and (hopefully) see the wiring diagram before you can plug it in. The bag is there to make sure that the card and the plastic cover don't come off in transit! Which given that only a tiny fraction of the population will ever rewire a plug, these days - and only a small fraction of that fraction will want to chop off an appliance plug to do so, and even when they do there's generally a wiring diagram or terminal labels moulded onto the inside of the plastic case anyway - is a total waste. ;-)


(I suspect the cover is probably actually there to make sure the plug doesn't scratch up your shiny new appliance in transit, and the card is probably some EU regulation.)

......... but why oh why do the 13A plugs have to come with a card backing around the pins, plus a plasric cover over the pins then a plastic bag over that lot?
Click to expand...

They do that so that eegits don't plug it into the nearest elephant before reading the instructions in Swahili.... :mrgreen:

Seriously though Douglas...if Rutlands were really serious about the planet they wouldn't buy everything they sell from Dakota now would they! :mrgreen: :wink:

The Swahili I can manage, it's Chinglish that confuses me! :lol:

Ah Jim - that is the other 'issue'. And a very good one indeed. I note John Lewis Group have recently re-introduced a Union Jack on every product they sell that was made here. I also understand that sales uplift across the UK-made stock has been about 30% after 4 months (and they expect that to increase).
It may sound a bit old and pony, but 'Buy British'. After all, look at what every other competitive nation aims to do which is to support local production. AND, this country has been, and still is one of the very finest producers of great engineering IN THE WORLD. If in any doubt look at what the UK does in Formula One, and then look at the SS gifts this year. The UK can innovate, and produce with real flair* - in almost all product categories the Far East does not. It is in the commercial DNA there to copy and value-engineer. * Flair to me is a creative thing - it's not copying, it's taking fine technical skill and marrying that with vision, and then with some art. [To counter an obvious question, there's an awl on the SS thread - not new, no great innovation - but it drips excellence. Just like an internal combustion engine, but tuned a bit.]

Yup...there was a fantastic programme on the TV a while back 'How to build a satellite'...all about Astrium. I had no idea just how leading edge and world class our satellite manufacturing industry was.
H

Yes I saw that and was quite surprised they had a branch at Pompey!
It was part of a series about British Engineering they did one on McLaren, Rolls Royce and the Airbus Wing Plant

Another one today, availing myself of the sale, a set of 10" brad drill-bits. Arrived in a small plain white jiffy bag. Well done Rutlands. I shall have to send them a congratulatory email I think =D>
F

I'd prefer There was a site with all brit made tools and hardware. Would make an interesting thread
C

Agree - but would take a bold soul to finance such a venture I suspect. Sadly the drill bits were made in China (30 quid for 7 of 'em). So actually, before Rutlands packed them they had already crossed half the World, and the steel wasn't local to China in the first place.

frosties":3mcsplyq said:
I'd prefer There was a site with all brit made tools and hardware. Would make an interesting thread
Click to expand...

condeesteso":1casz2jo said:
Agree - but would take a bold soul to finance such a venture I suspect. Sadly the drill bits were made in China (30 quid for 7 of 'em). So actually, before Rutlands packed them they had already crossed half the World, and the steel wasn't local to China in the first place.
Click to expand...

Maybe not as much as you think. It would likely be linked to one of the usual deals anyway- you could buy from britishtools.co.uk and it is fulfilled by a dealer offering the full (worldwide) range on their other site.
C

Marcros - getting interesting. pm on the way to you.
H

I wouldn't normally post this stuff and Im quite happy to receive larger boxes as its useful to me as all my packaging received is reused when im sending out stuff. Haven't brought a box or jiffy bag for as many years as I can remember.

Anyhow reason for my post. Axi have now sent me out 3 switches for my wetstone grinder. The first one arrived in a jiffy, it was broken and broken before put in the bag as the missing broken part of the plastic clip wasn't in the bag with it. I taken the clip off my old switch to find the new switch suffered from the same problem. They sent me another, again in a jiffy but was again a used switch which had the same problem as mine. Then today I get this box containing only what you see in the picture... 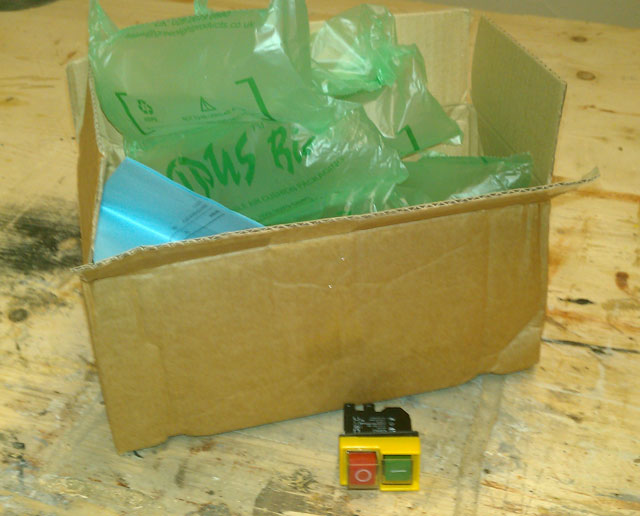 Which although brand new, IS THE WRONG BLOODY SWITCH!!

That is some box for an NVR switch. And 3 attempts to get you what you bought. Personally I'm far too old now to save the world, but I do find this kind of thing depressing.
And a reminder of a tweet from one of the guys at Viz ages ago: " Kids, we're supposed to be saving the planet for you. So do us a favour and meet us half way, by turning some effin' lights off now and then."
You must log in or register to reply here.

Advice on buying an emergency generator
2 3

Screwfix, what an utter pain in the proverbial
3 4 5