A good friend asked if I would add a drawer to an entry hall table of hers. Of course I said yes, but when I saw the table, I decided that it needed more than a drawer.

She did not ask what I had in mind, but just said said okay.

Why more? I just thought the table plain and .. well .. boring. We have been friends for most of our lives, and I could not recall even seeing this table in her entrance hall. That goes to show how forgettable it is! Okay, some of you may disagree. Everyone is entitled to their own taste. So you tell me what you think of this table, and how you would (or not) re-design it. I know what I plan to do at this stage, but there is time to be influenced. Mostly, I am interested in how you think

This is in my entrance hall ... 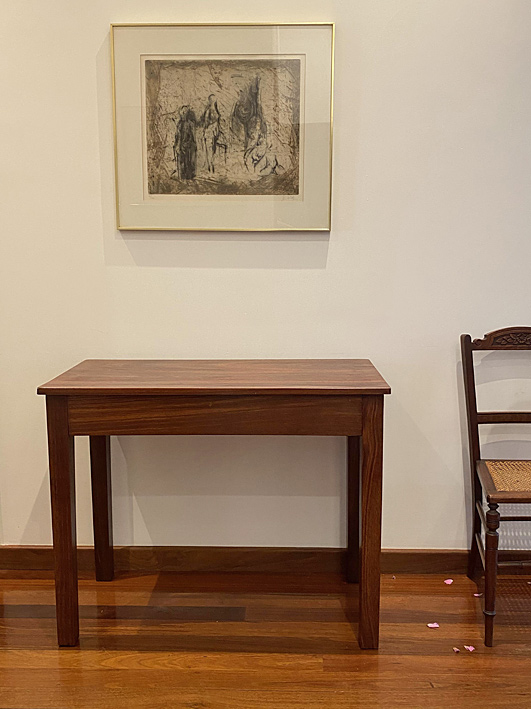 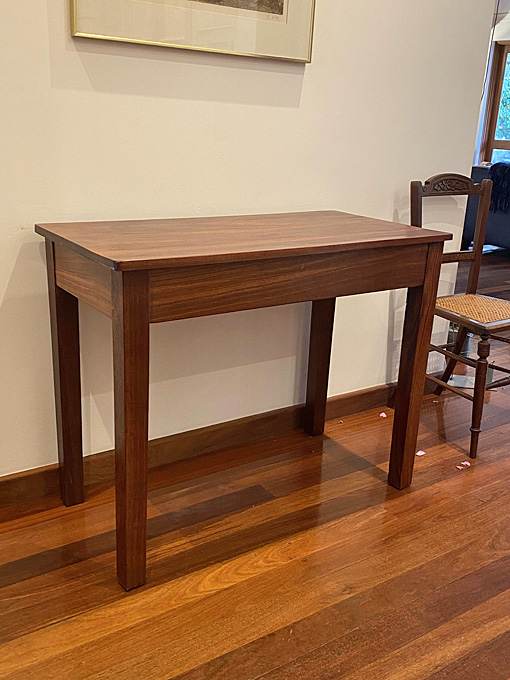 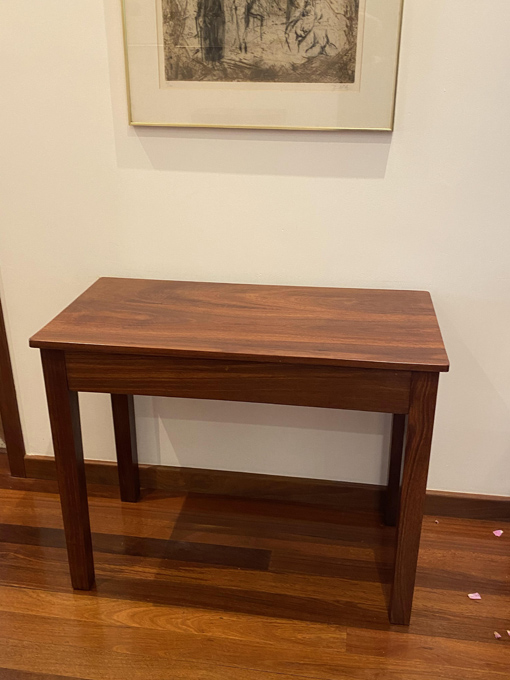 The idea for the drawer is that it will be made from the front apron and be invisible. No handle. To do this, it will be necessary to pull the table apart since the apron will need to be cut up.

This is the underside of the table ... 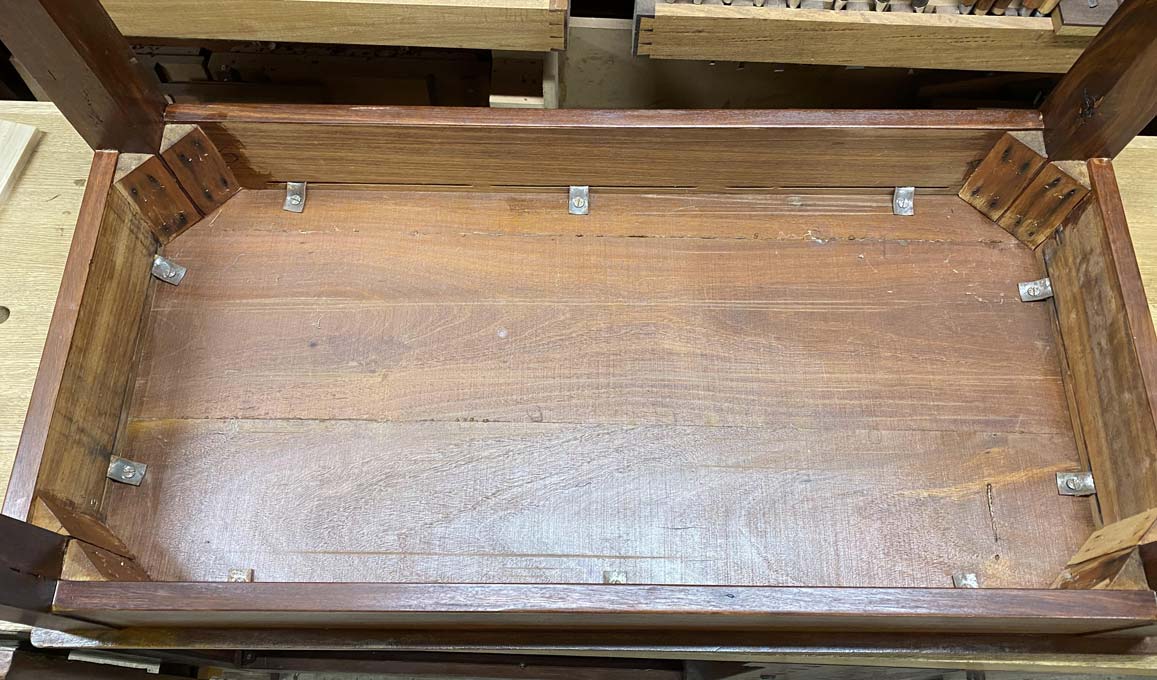 The table is not particularly old, perhaps 40 years? The screws are slotted ... 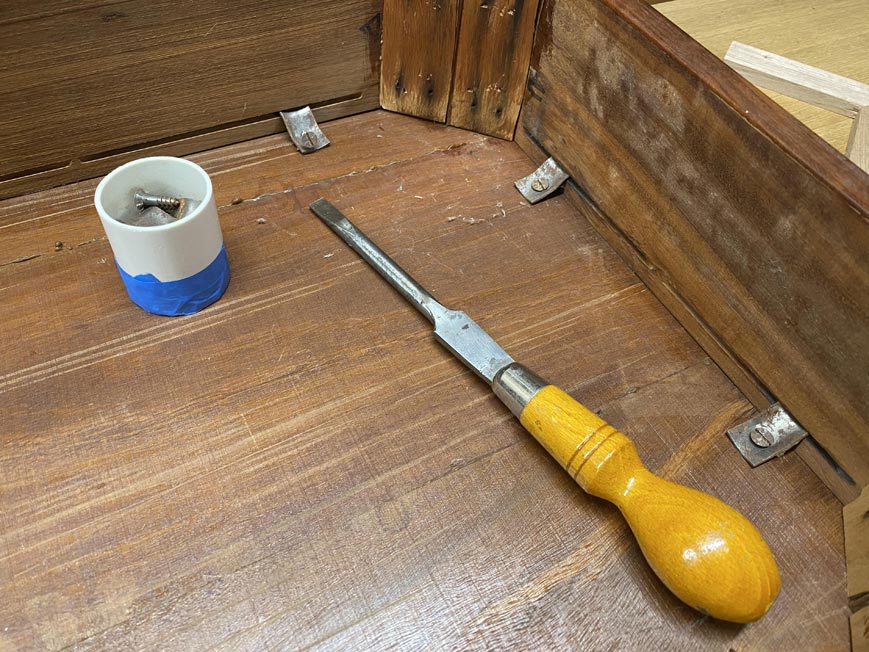 ... but the corner blocks were attached with glue and brads. 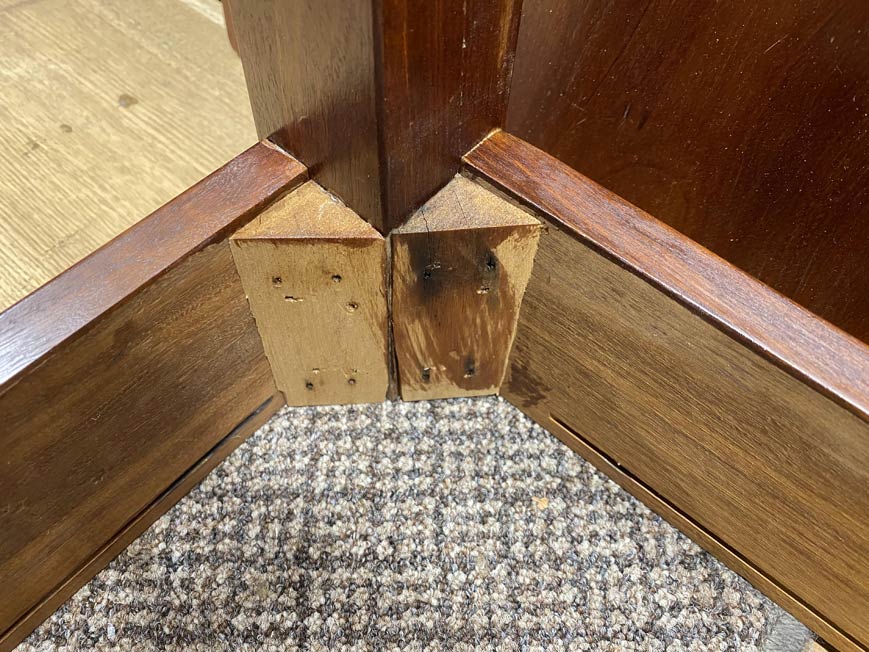 A plague on the house of furniture builders who attached corner blocks with brads! They shoot in and are nearly impossible to remove.

The blocks are tough and it is necessary to split them along the grain ... 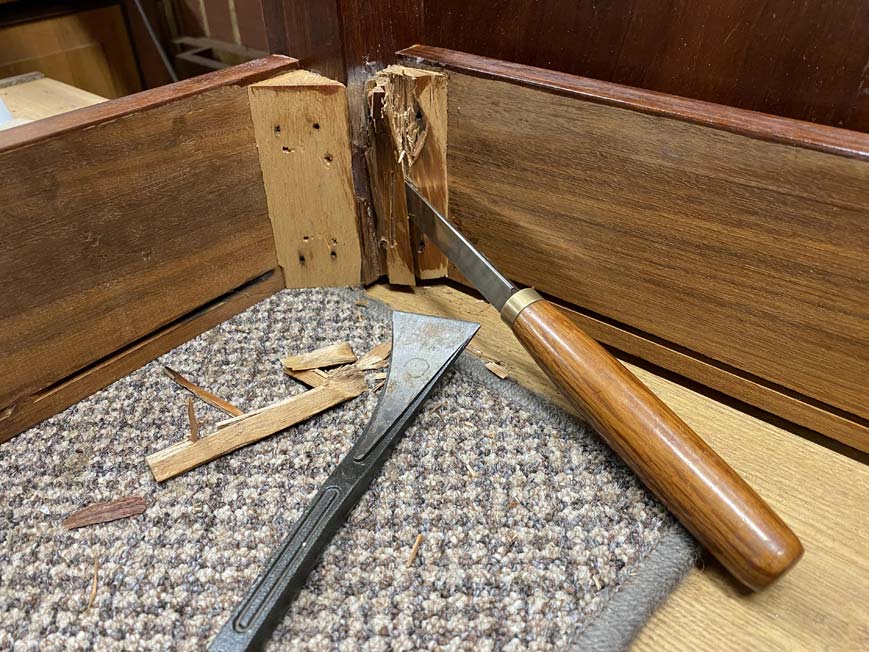 I managed to get out most, but not all the brads. The metal is brittle and a few remain behind ... 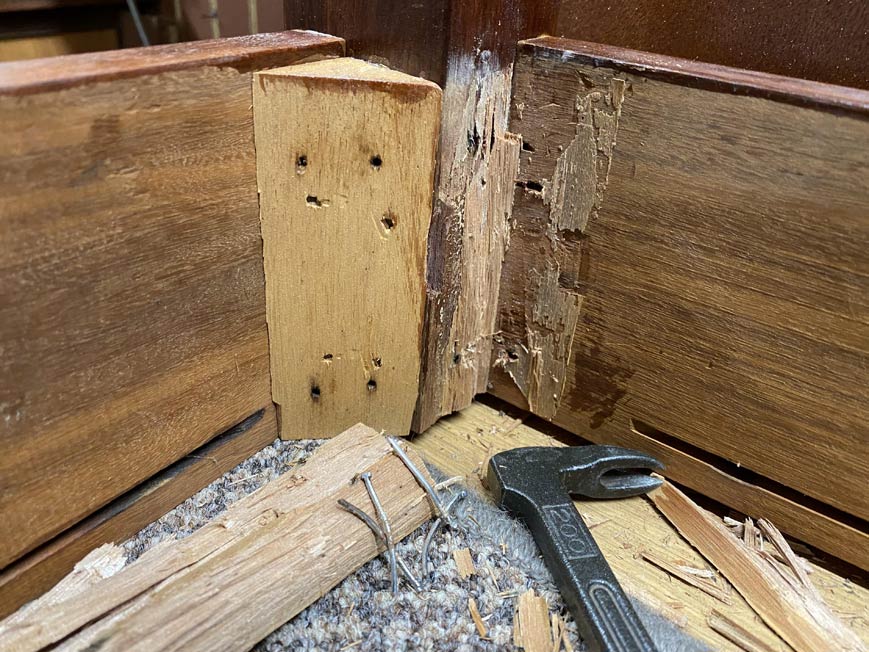 Just as every building can't be "iconic", some furniture has to be dull, utilitarian, anonymous. This poor thing hasn't a lot going for it. Over-weight legs but not chunky enough to be from a whole other aesthetic. Broad, featureless and straight apron, taking away any lightness the top of the table might have had from a thinner or curved one. A rather dull and featureless top with an un-moulded edge and a miserly school-table-like overhang.

Personally I think there is an argument for taking this to bits and using the wood to start from scratch in building a new one. However, given your brief, and dependent on being able to match the finish, I'd start by tapering the legs. I'd then put a curve on the underside of the end aprons, I think, and start again at the front. Unlike you I really dislike flat drawer fronts without surrounds or handles ("invisible" drawers), so my front would have a curved underside surrounding two slim drawers with central divider, and they would be far from the full width of the table. All the aprons would have a bead to their bottom edge. Like Woodbloke, I think that picking (or making) the right drawer pulls/ handles is critical to the overall look.

I would need to do something with the edge of the table. I don't think there is enough overhang to chamfer the underside, so I'd look at shortening the aprons to create the necessary overhang. Putting a thin and elegant edge on the table with it's elegant new legs and shaped aprons would complete the new look. Still not that exciting, but a lot better than the existing.

There is another approach, though, which takes its cues from the chair sitting next to it. Carved and shaped aprons (this isn't mediaeval-type furniture, so not, for instance, thumbnail designs........more like stylised shells, acanthus leaves, maybe the owners initials and the date). But critically, Queen Anne style ball and claw feet on cabriole legs.......so a whole new set of legs.

I don't think it is all that awful but tastes are different for everyone and we don't know what the rest of the ladies furniture is like. Drastic changes might not look appropriate when it is back in her home.

I wouldn't have cut the corner blocks to remove the apron. I would have left it intact and cut with a Japanese saw two vertical cuts a few inches from the legs to a point near the slot for the clips and then across. That would leave a few inches at each end to put rails front to back for the drawer to slide between. Then build the drawer using the existing front. You would still have the option of putting a slight curve in the bottom of the front at a sacrifice to depth but that wouldn't be a problem as it likely only holds keys and maybe some pens and paper. Since grabbing the bottom lets you pull it open there is no need for hardware.

Another option if you have the Jarrah and I know you do, is a shelf could be fit, possibly floating, to place a nice vessel or sculpture on. The shelf acting as a stretcher would restore any lost strength from the reworking of the apron to a drawer.

Use the top as is, new tapered legs, maybe drawers instead of the front apron will make it lighter and less like as Mike says, a school desk

As some recognised, I plan to pull the table apart and rebuild it with the parts.


The table top is the key. It fits the space where the hall table will live. This means that the width of the table cannot be changed. All the other dimensions must work with it.


Clearly the top is too blocky, and the depth needs to be reduced to achieve a more aesthetic proportion. This will allow the top to be re-shaped. Perhaps a gentle curve front and rear (getting rid of the rounded corners at the same time!).


There needs to be overhang to the sides and the front. To enable this, the skirting needs to be shortened front, back and sides. This is the reason I have begun dissembling the base.


The legs will be tapered, naturally.


I have an idea for the drawer. Hopefully interesting enough to add a little playfulness to the design.


Joinery? I need to work out how much the skirting must be reduced. That will decide whether I can do mortice-and-tenon joints for the legs. Otherwise it will need to be dominos.


I suspect that the current joints are M&T as the corner blocks made no difference to the rigidity of the construction. It is Really Strong. No give at all.

Now to draw it up and present the concept.