So, essential workshop item - winding sticks. I figured these can't be *that* hard to makesince they're basically one bit of wood, although since accuracy is required this could be a bit of a saga (spoiler: they're already sitting with their first coat of finish on them) and I'm using yet another quite difficult material. The sticks themselves are bog oak and the accents are in maple. Luckily I've got a 17mm PAR board of bog oak so that reduces a lot of the "can I get this square" issues, shown here with the offcut of maple: - 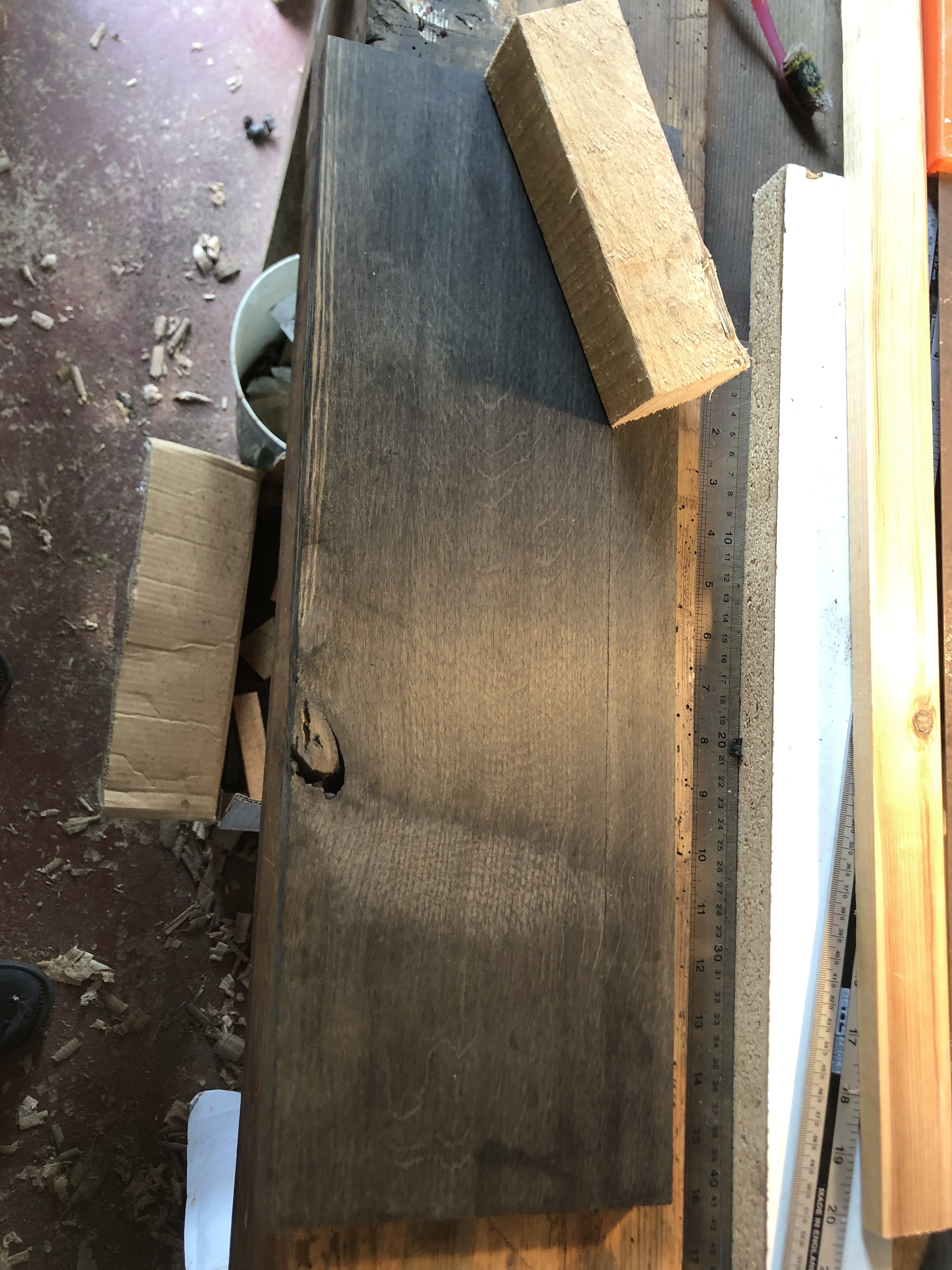 First job was to get the two sticks cut from the board and squared up. Bog oak sawdust is like coal dust. Behold my tragic sawing: - 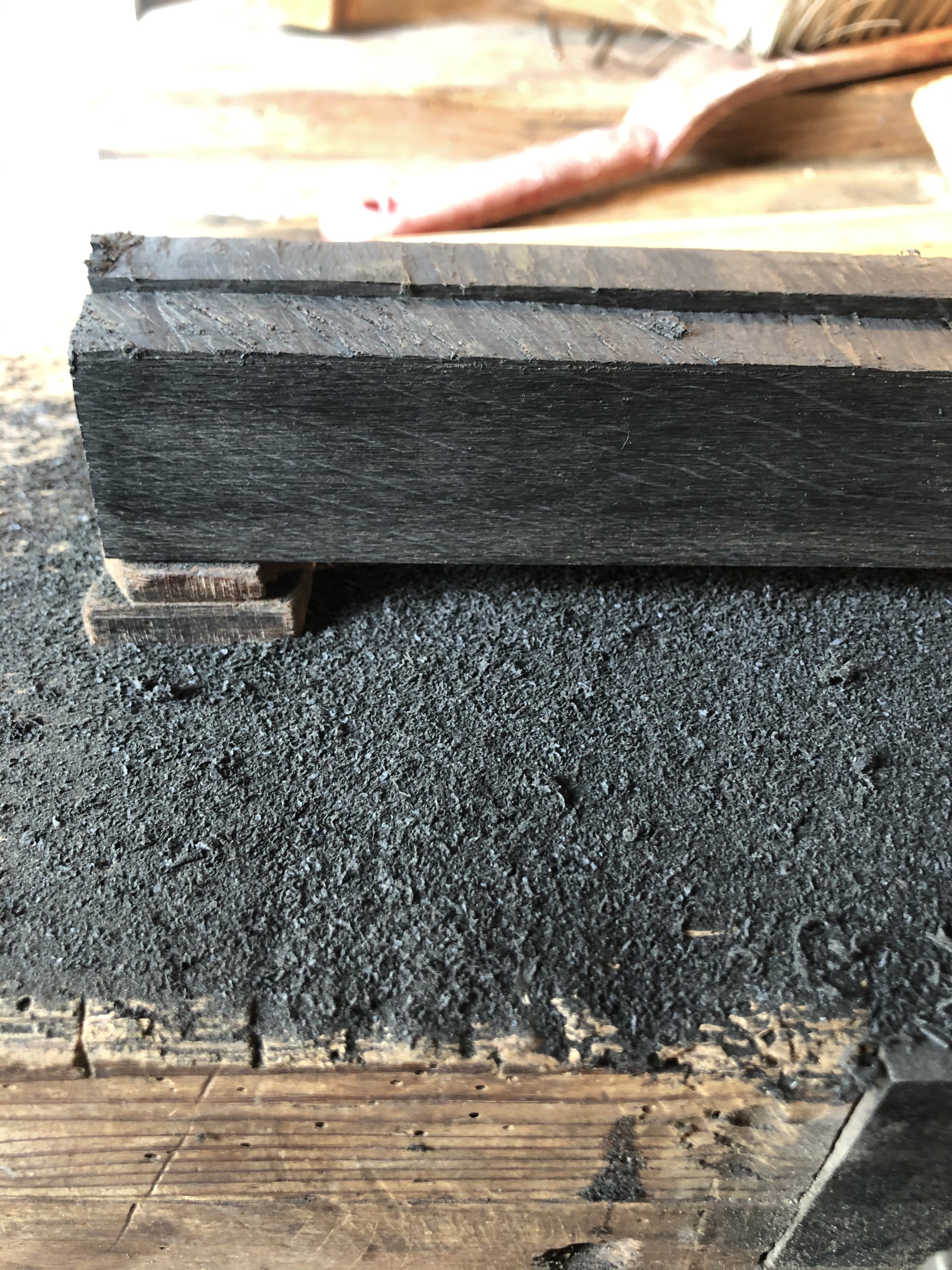 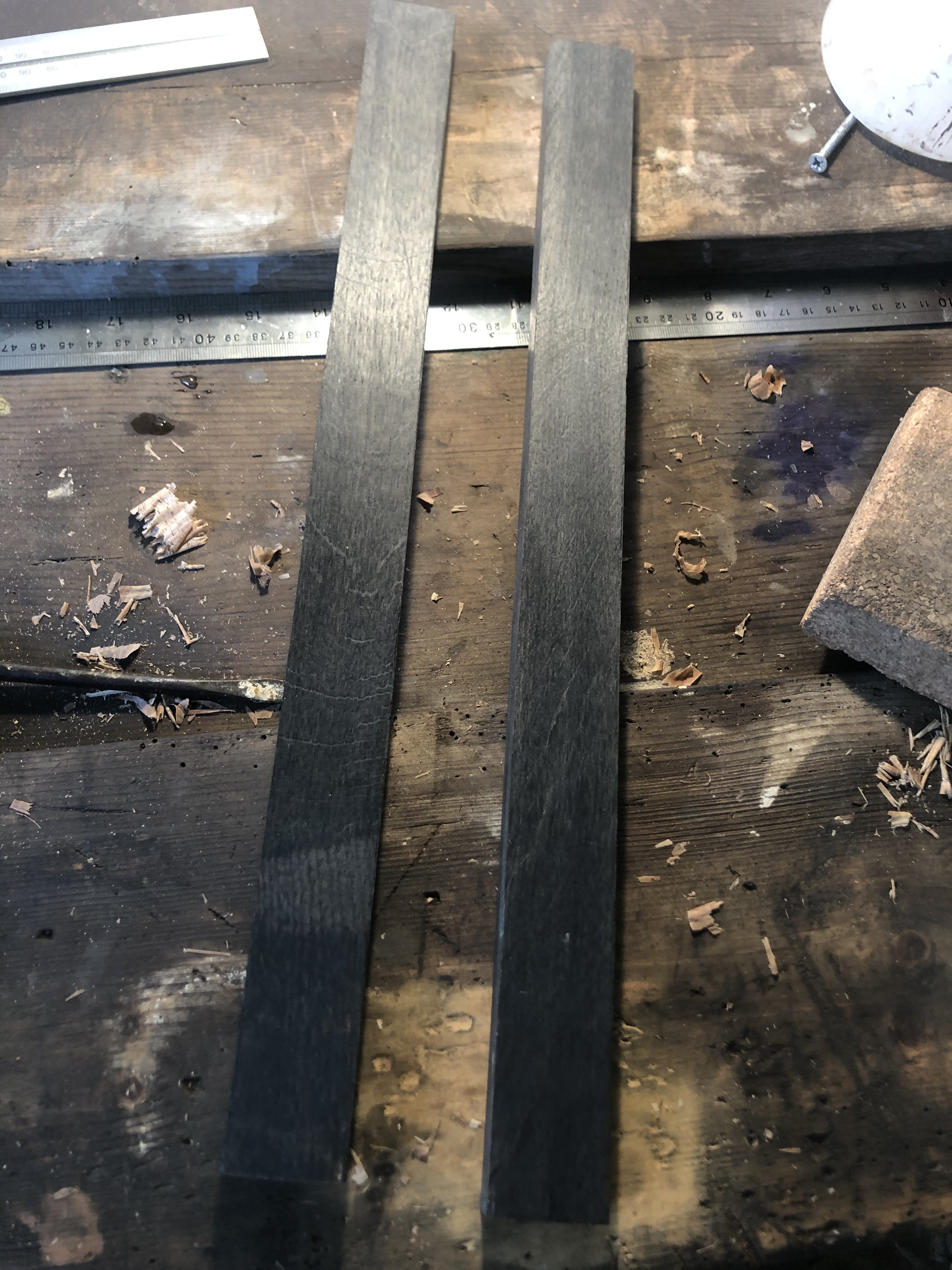 Once the sticks were planed I chamfered them, as this seemed to be the done thing to make them less likely to topple over during use. This was done by propping one edge up on the small piece of moulding you can see to their right, and then planing them. 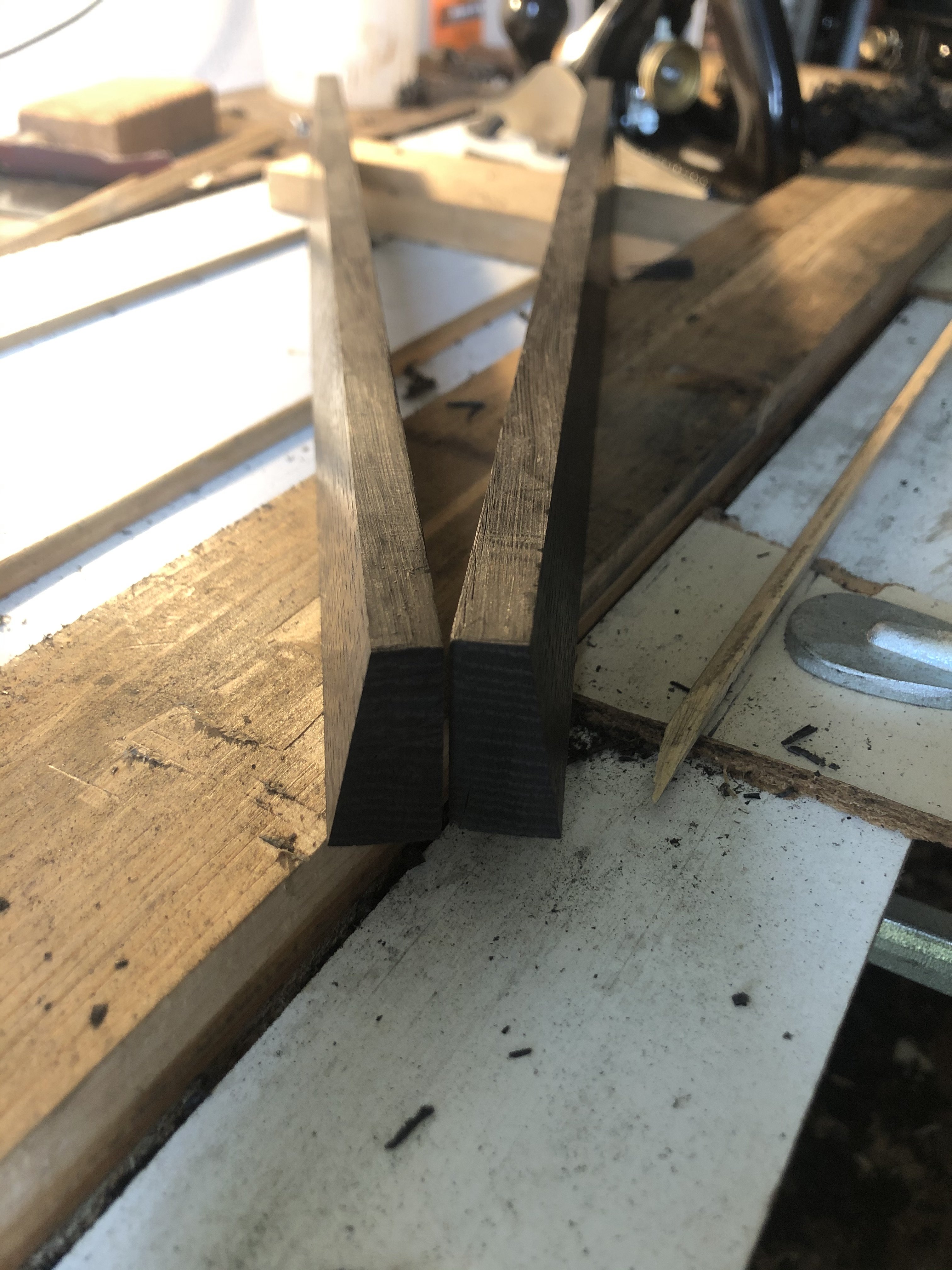 Next up - the two accents on one of the sticks. These were measured using a 1:8 dovetail square and made from an offcut of maple. They were left rough cut so I could plane them down once they were glued in. 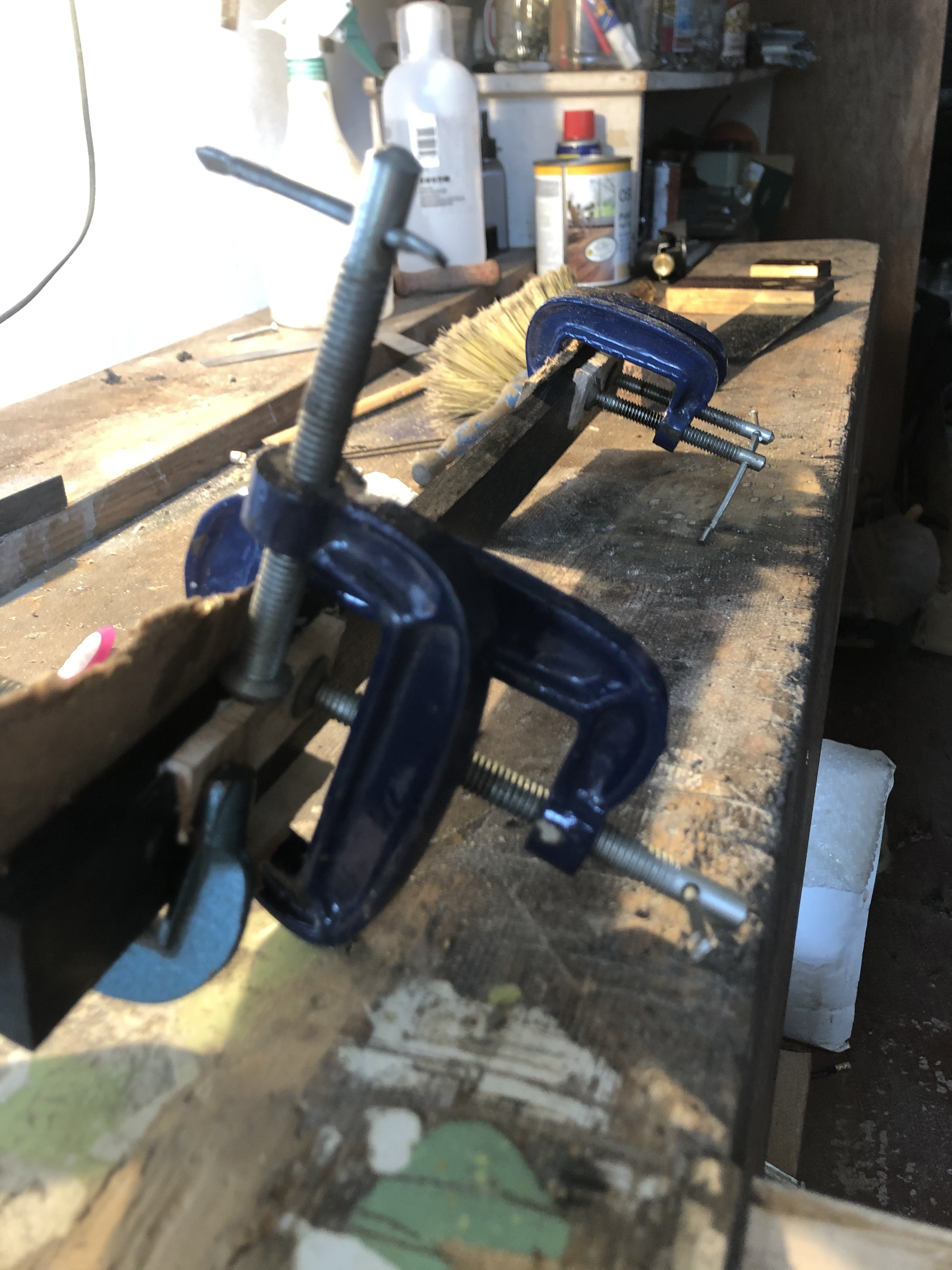 Once the glue was dried, they were finished off. The next step was putting centre point markers onto both sticks. I was going to use dowel, but my attempts to make a dowel using washers failed and so I opted for a couple of simple vertical strips. These would have been the full height of the sticks, but I had a small leftover piece that was ideal for making them despite being shorter.

One was slightly wider than the other thanks to my inability to keep a 3mm chisel between the knife lines. 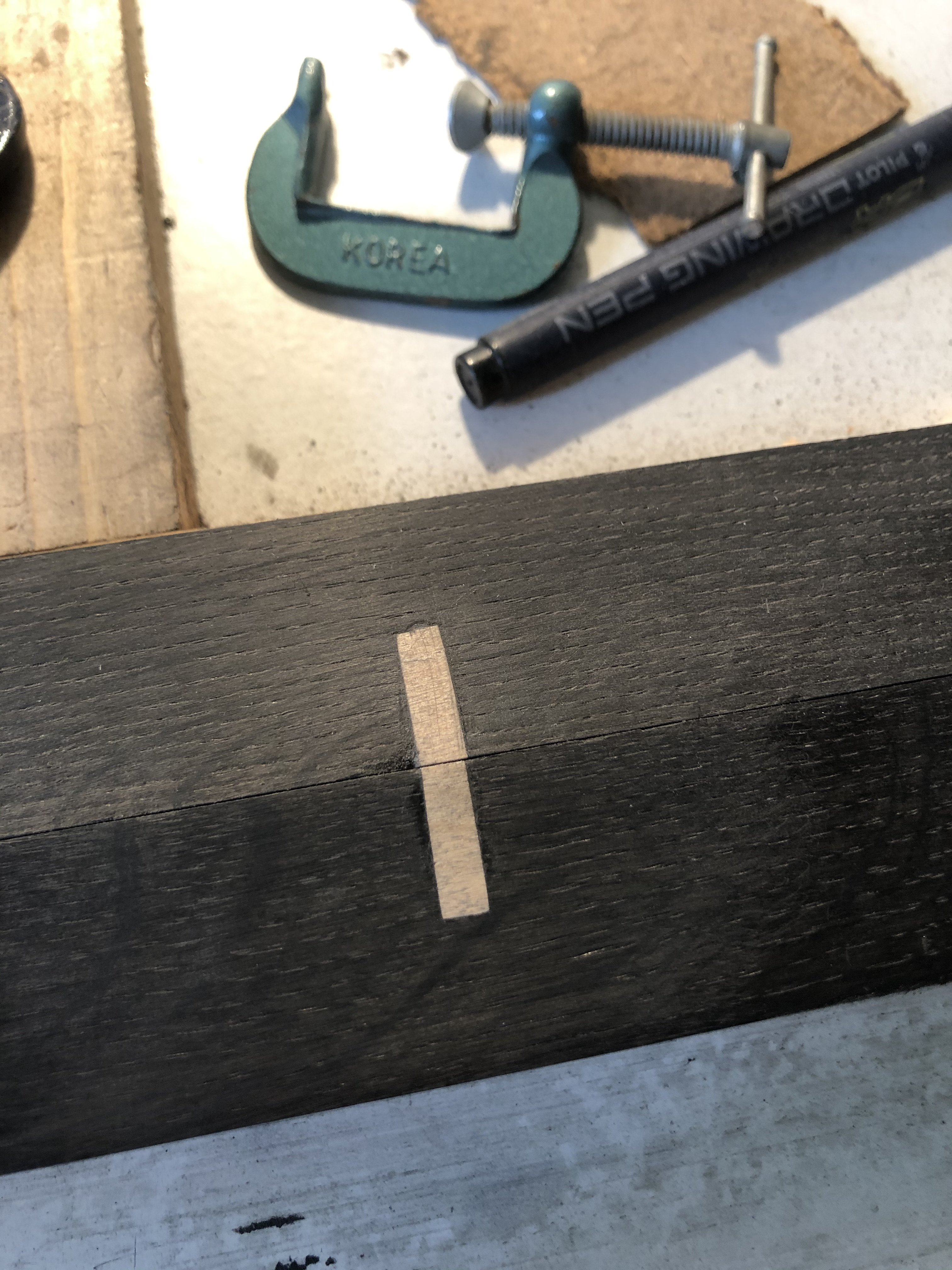 With all that done, it was time to finish them. I used Osmo Polyx Satin. The difference between finished and unfinished was quite staggering. 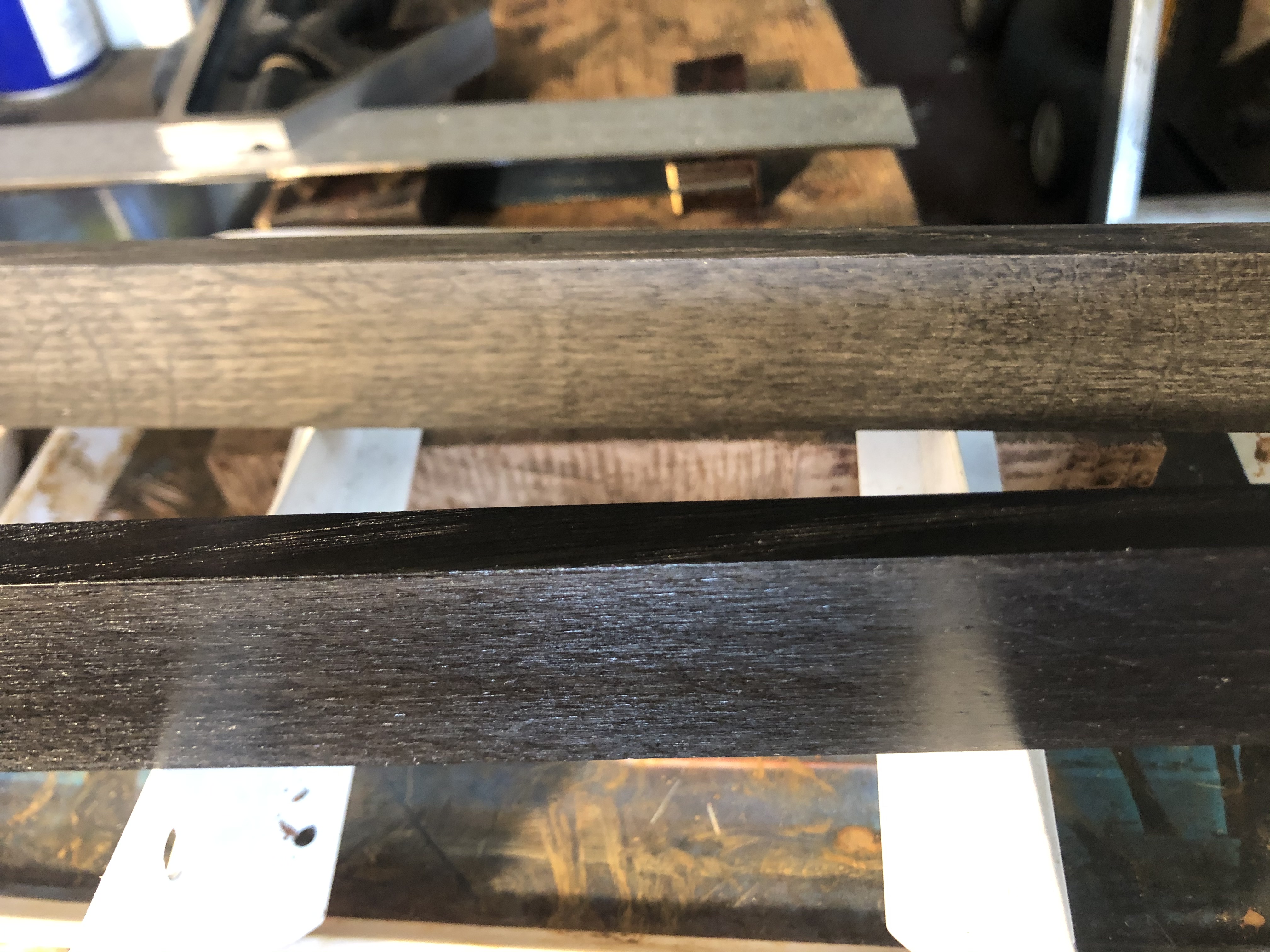 They're currently awaiting the second coat, so.... to be continued...
O

Having a set of winding sticks kind of makes you feel more professional but for most of my time at woodwork I used whatever was at hand. as long as they are strait it works. For smaller work I often used 2 pencils. Only got around to it a couple of years back. Not as fancy as bog oak however.
Regards
John

I love what you are doing: all the sensible woodwork learning tasks I still haven't got around to.

I am also in awe of the wood you just happen to have available. Winding sticks should be handy bits of scrap, shouldn't they?

Trainee neophyte said:
I am also in awe of the wood you just happen to have available. Winding sticks should be handy bits of scrap, shouldn't they?
Click to expand...

The walnut cost me £60 from an auction, the bog oak has been lying about since my Leeds Art days when I was making a copy of Andrew Lawton's janus chest from F&C 141 - it never got finished and now I just don't have access to that sort of industrial level machinery which makes the idea a non-starter so I figured I might as well at least use one or two of the boards I'd prepped.

The rest of the timber is because I bought 6kg of offcuts from Exotic Timber in Staffordshire for about £25, so I could see what different timbers were like in the flesh, and hopefully have some pieces I could use for accents here and there for negligible cost. Hence the purpleheart in the bench hook, the maple in these, and the upcoming use of sycamore in the other thing I'm making.

I love timber winding sticks but I've been very happy with the ones made by vertias made from aluminium, must get around to making some from wood. 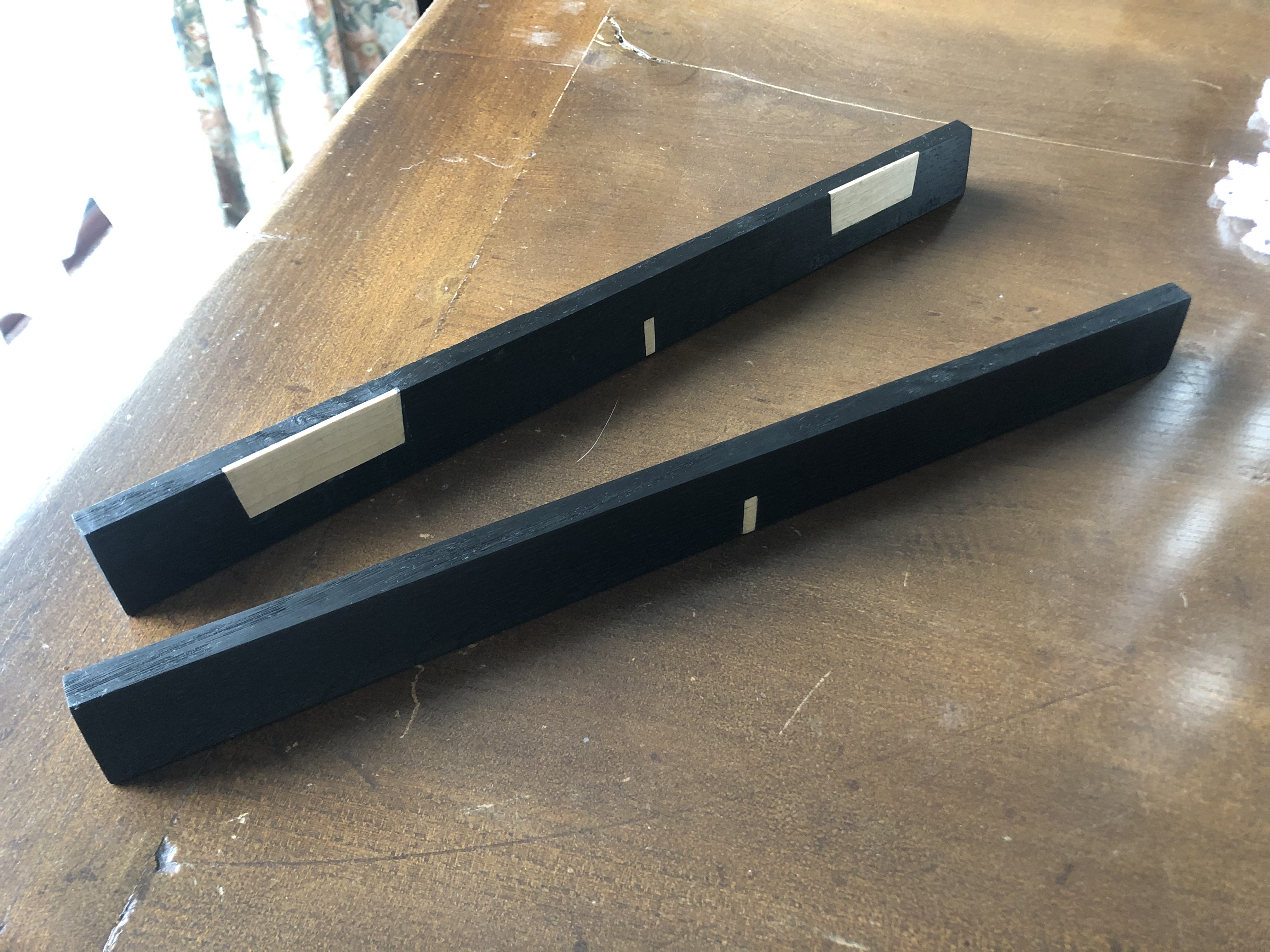 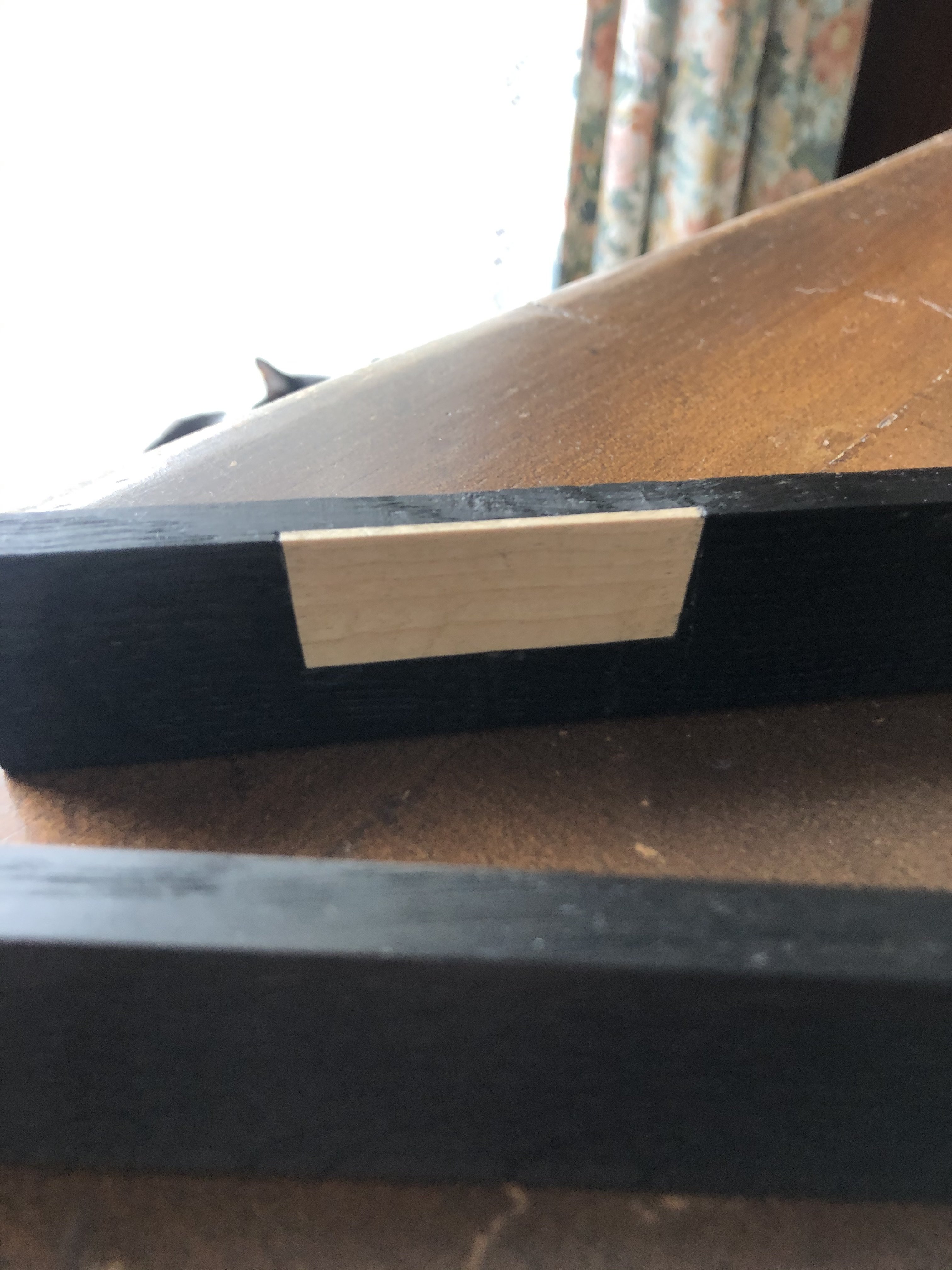 Either your photography or your setting-out looks dodgy, though, as that mark on the lower edge looks off-centre. I'm sure it's you photo.

Just an aside in case you ever work with bog oak on a furniture project. Have a look at those pale inserts (are they maple?), and see the small amount of "bleed" of blackness on the end grain? I'd be pretty sure that's as a result of sanding. Bog oak is weird stuff, and the dust stains almost like coal dust, so if you ever do anything posh with it, this is where a scraper comes into its own.

It’s my photography Mike. And yes, I learned a lesson about bog oak sawdust

1. Again I didn't make life easy for myself by using bog oak but it looks sooooo nice.
2. Probably the easiest bit was the chamfer, because it didn't matter in terms of accuracy so I think I relaxed a bit when doing it, which stopped me making silly errors due to stress!
3. I cut the rebates before cutting the inserts. I'm pretty sure that's very bad practice and I need to get away from my "cut first, think later" habit.
4. This project was made easier by not involving much sawing, but then again must harder by the amount of planing that had to be a lot more accurate than I would usually attempt for an early project.
5. As Mike has pointed out, I ended up with a lot of sanding dust in the maple. Whilst I own 4 cabinet scrapers the idea of using them didn't actually cross my mind so I just sanded the fronts very gently instead. This got rid of a lot of the problem, but certainly not enough if this was meant as a showpiece (which it isn't obviously).

Much like the bench hook I suspect that these will end up getting a lot of use on instagram.