After many years searching I have managed to get hold of a slightly tatty US Automatic Pencil Sharpener.

As these are an essential bit of kit most of you will already own at least US Automatic Pencil Sharpener but, for those of you that don't, here is a demo:

Very little work was needed to get it going, one of the small retaining springs was broken so I made a replacement from a picture hook; I sharpened the blades (freehand, natch!) and did a sympathetic restore on the rustiest parts: Not bad since it is at least 110 years old and clearly very well used.

For those old duffers - I know you are out there! - who are muttering that it would be easier to use a sharp chisel to do the same job, I am afraid I do not have time to explain to you why you are wrong as I am very busy sharpening 100s of pencils.

Very nice machine not jealous at all.

That sent me on a trip to find one here on ebay since I'm making pencils as a little one off fun thing...

I won't gloat about the price of mine in that case! I read they were selling 109,000 a year at one point. I wonder where they have all gone?

nabs":399qusqj said:
I won't gloat about the price of mine in that case! I read they were selling 109,000 a year at one point. I wonder where they have all gone?
Click to expand...

Not sure, but I'll have to haunt the UK ebay and see if I can find any there. There's that one on auction, and then four or six more that are more like $180+ on "buy it now".

There wasn't much desire for sentimentality in the US for quite some time - not at least until the 1970s, and much of what was made here in the early 1900s or before was thrown away if it wasn't in use. WWII practically stripped the country of anything that could be taken to a scrap yard (let alone the scrap drive efforts that were people motivation only - that stuff all went to landfills).

I had two sets of grandparents who went through the depression - they were both tight with money, but loved modern conveniences. The lone objects that I can think of were a man powered cultivator/weeder at one (For the garden), and my grandmother on the other side kept her wringer washer as she preferred the wringer for some of the clothes and didn't think a regular washer and electric dryer was really up to matching results. It was a powered wringer, though.

They had zero interest in things that reminded them of hard work and pain. Huge explosion in antiques here as far as value (among the common man - the mellons and the rockefellers collected true antiques the whole time) didn't occur until the 1990s. The prior wave was related to the western cowboy stuff on TV.
D

An good article on the history of the Automatic Pencil Sharpener Company (APSCO) can be found here.

By the 1920s they had 12 different models and were making half a million a year! 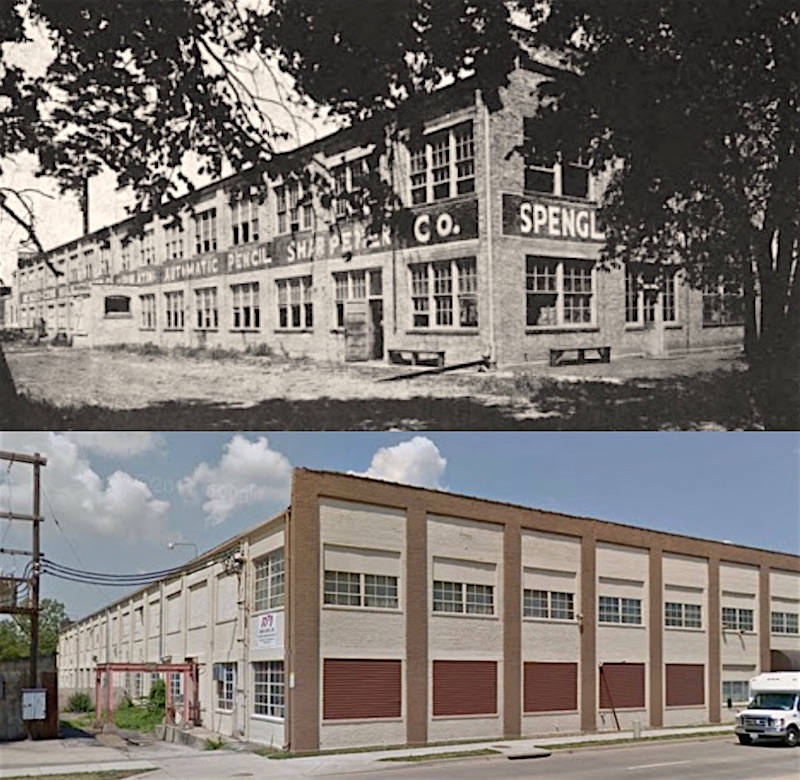 I like the look of the 'Chicago' and it brought back long forgotten memories of emptying a similar model kept on the teachers desk at my junior school. 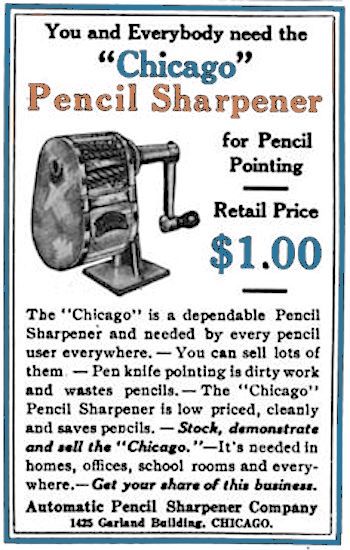 I also learn that my new purchase is the original model and retailed for $3.50 (about £70 in todays money) and saved "$70 per year wherever three pencil-sharpeners work". Pretty good value for something that was clearly designed to last forever.

I had no idea that pencil sharpening had been such big business. Having said that I also did not realise, until today, that the humble biro was not invented until the 1930s, which perhaps explains it. 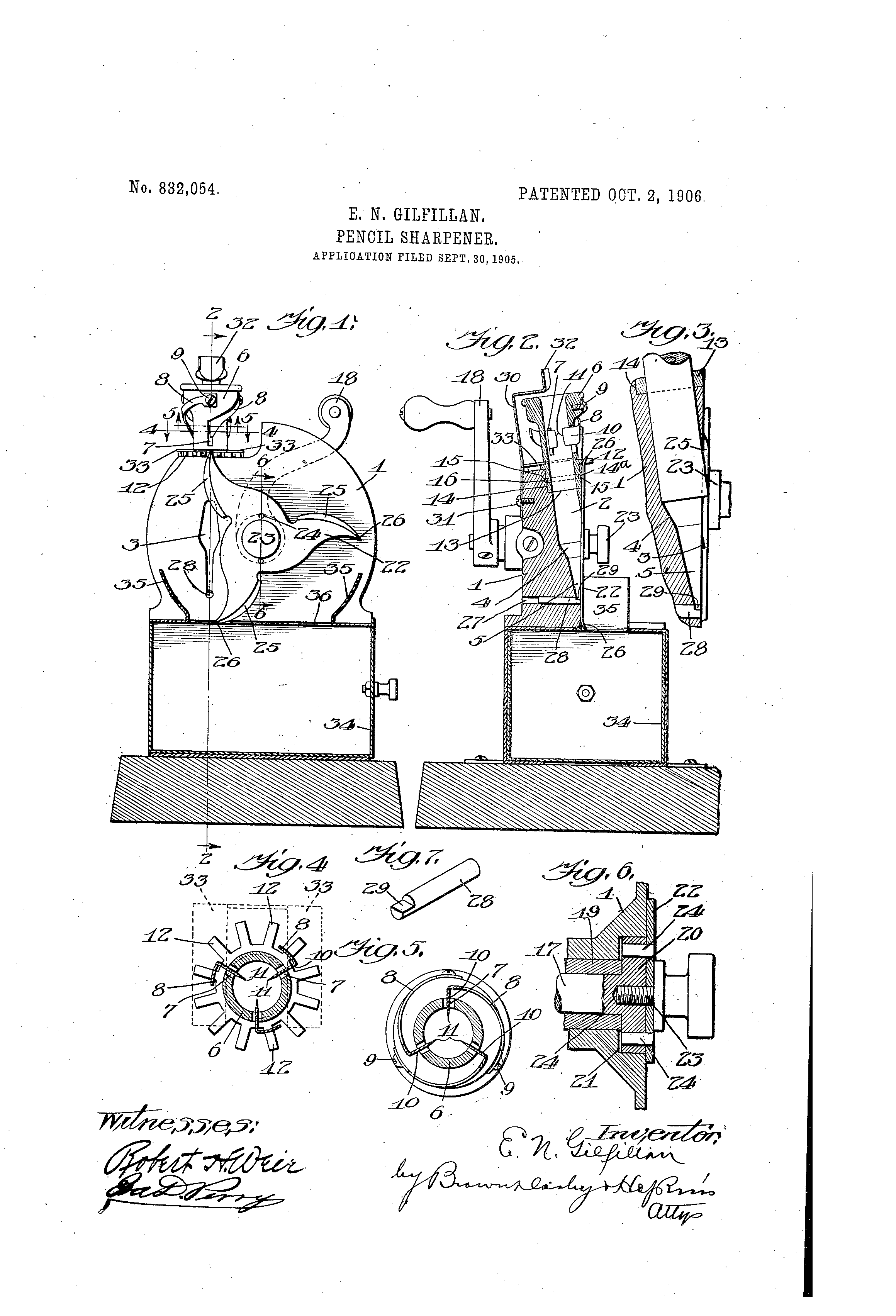 Here is a much earlier attempt at creating a better sharpener by the plucky Brits, the memorably named "Styloxynon". Good effort. 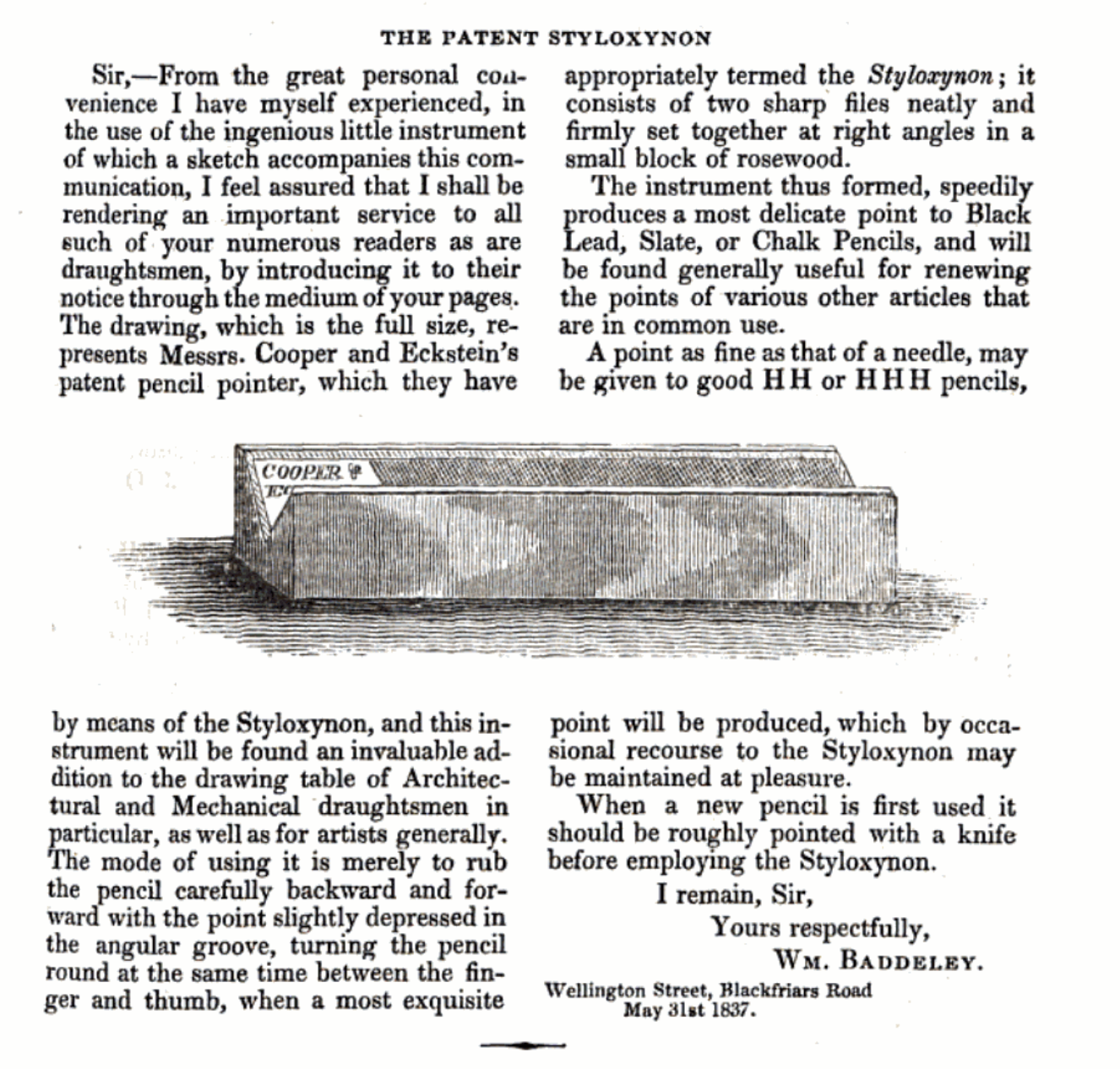 Never seen one like nabs shows, but the "Chicago" shown further on in the thread looks very much like one teacher had on her desk (screwed on I think) back when I was at school - all brass & chrome I seem to remember.

But fairly recently either Lidl or Aldi had a very similar looking item for sale here - about the only difference was the body is black plastic. Cheapo (as usual) but works very well - in "daily use" in my cellar shop.

Haven't seen them again since I bought mine though, I guess a couple or three years back now.

Nabs, I don't understand those diagrams, I wonder if you'd mind building a replica to show the stages, with a complete wip thread on here and some YouTube videos?

Seriously though, I think you've found a new topic worthy of one of your historical studies.

My favourite pencil related anecdote is that code breaking at Bletchley Park almost stopped because of a shortage of pencils.
An appeal to Churchill led to a personal decree by him that they should have all the pencils they needed and the rest is history.

But did they save precious decoding time with automatic sharpeners? If so, which model? Did they come from Chicago on an Atlantic convoy?

Ahh...it looks like they made them for at least four or five years.

I believe they made about half a million fordson tractors here just after those and they're mostly gone. Ww2 sucked up much that was made of iron or steel, too. Wellhead and water pumping engines and old generators that we'd find novel, so much of it was melted into armament. I just wonder how much was melted into ingots for sport and never actually used.
M

One of the great inventions. I had a Costco battery one for around twelve years only replacing it with a new Costco one when I broke it
C

Very nice machine, congratulations. If anybody wants to see much more of this/these, have a look at this page (sorry German only, but with so much pictures):

I have some of these sharpeners and use them all the time.

fascinating machines
but there's something very satisfying about sharpening a pencil with a good sharp penknife, Stanley blade or scalpel, and shaping the lead.

Very interesting that "spitzmachine" web site, which fortunately I can mostly understand - and as Claus Keller says, MANY pix. An "astoundlingly huge" collection BTW, especially as it's apparently aprivate collection.

BTW, I wonder what people (relations, friends) said to the first bloke who said "You know what, I find sharpening pencils boring and time-consuming, so I'm going invent a machine to do it better/quicker". I wonder if the reaction was "nah, such a thing'll never sell".

A bit like the bloke in 3M who "invented" (developed?) glue that doesn't stick very well (sounds pretty useless) but ends up on Post It Notes. ;-)
D

Love this vintage stuff.
A

This is my pencil sharpener:

At that price you can even afford to get a reserve in case it falls into the shavings bin!
D

I like the smaller two hole sharpeners for the shop - they can sometimes be had for a dollar each in groups of 20 (the kids carry some off). Fastest way to sharpen a new pencil is to put it in a cordless drill - a fully sharpened pencil appears in about a second.
N

I use a Kum sharpener that was my sons when he was at school eighteen years ago. It only has a cheap plastic casing but the cutter is brilliant, cuts a good point even on cheap pencils.