Hi all, I got these planes about a year ago from a car boot. For the princely sum of £12 I put them under a bench and forgot about them untill recently. There are loads of differant profiles. Just wandered what people thought of them.

They don't do a lot for me I'm afeard but there are other members who'll be falling out of their seats at the sight of that lot :lol: - Rob

same here I'm afraid - not a real friend of the Woodies - too many memories of using them as an apprentice!

Well, I think you should get them out from under the bench, put them into working order and use them!
They are under-appreciated by many people, so regarded as almost disposable. They won't make you rich, but they can make you happier.

It's hard to be certain from the picture, but it looks like you have the standard trio of bench planes - jack, try and smoother. You also have a plough, and possibly a sash fillister (at the back) - but it might be another plough.

In the box you have at least one rebate plane (at the back with the nice snail shell escapement) and some moulding planes. They are most likely to include hollows and rounds (the commonest and most useful moulding planes) and possibly some sash moulders and some beads.

You will need to get the rust off the irons and sharpen them, and make a new wedge or two, but it's surprising what can be rescued with some turps, linseed oil and tlc.

There are lots of restoration threads on here - for example, this was a basket case I put back into use, probably similar to yours: https://www.ukworkshop.co.uk/forums/rescuing-old-wooden-planes-t51614.html

Edit: that's not a rebate plane, it's a moulding plane where someone has modified the escapement by carving a chunk out of it.

I wasn't sold on them either until this little skew rebate came my way....

...and the plough planes are lovely too...

One clear obsession of these wooden marvels is without doubt mark research. It's really amazing how much history can be gleaned from the Internet...rather like tool genealogy!

Have fun my friend...

Blimey - this forum is nothing short of amazing!

I'm in the process of refitting the tool-chest at the moment (among several other jobs), which has meant temporarily evicting the contents. Among them are several moulding planes, some inherited from a long-passed away grandfather, some 'aquired' over about twenty years. Looking at them, I thought I really ought to have them in working order if they are to earn their place in the chest, and some of them need a really good clean. Hmmm, thinks I, must post a question on the forum asking how best to clean wooden planes.

Blow me down if AndyT doesn't answer the question before I've even asked it! Andy - are you psychic? Anyhow - thanks very much - just what I needed to know!

Happy to help! Do put pictures of them up if you need any extra hints, or identifications. And bear in mind that I use boiled linseed oil on planes which I regard as being for use, and not especially precious, on the grounds that its use was a standard part of maintenance when wooden planes were the norm. In museum circles, its use is frowned on as it does darken over the years. If you have any real museum pieces, I believe that the current consensus is to use microcrystalline wax (eg "Renaissance wax").

Hi I had some fun today cleaning and sharpening a couple of the planes. I quite like them, I think I might be getting drawn to the dark side.

Blimey Jim, I've just shared a bottle of decent red vino with SWIMBO and in my blearly state just before the wooden hill, I read that as 'wipe with blood to restore'
Bed! :lol: - Rob

Location
Up the proverbial creek

Well blood sacrifice is often demanded, in my experience. :lol:

S'what I do to clean them up, for what it's worth. Caution though; it's another one of those Slippery Slopes. (Gratuitous shot to follow, 'cos we all like da pretty pictures, right?) 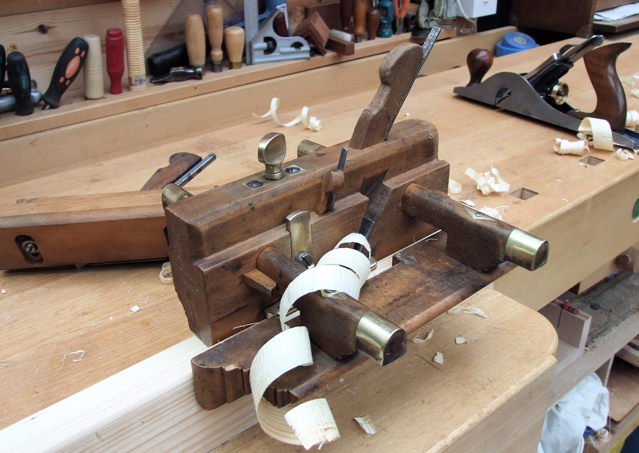 I spent some time cleaning some of the planes today, they seem to be reasonably local. Newcastle, york and Glasgow. Are there any makers of merit that I should look for. I found a couple with worm flight holes so they got a good squirt with killer.

I really don't want to ask this but can you post some pictures of the marks?

I refuse point blank to admit that I am on any form of slope whatever...no...not me...not that slope! Honest guv!

Location
Up the proverbial creek

Just a tip for all really, but with moulding planes etc, it's actually a lot more useful for identification purposes to have a picture of the end, rather than the side. If it's the end with the maker's mark, so much the better - maker and type identification can usually all be achieved in one happy little package.

That was a Public Service Announcement on behalf of the Dammit You're Showing Us Wooden Planes But Without Enough Information For Us To Get Properly Jealous Aaargh Society.

I could really dislike you lot....especially the head instigator of all things woody and whizzy! :mrgreen:

Don't suppose there are any from Bradford..?

Well, I seem to be sitting in the chair next to Goodman's "British Planemakers from 1700" so shall I have a look and see what it says about these? [I only have the 2nd edition; the 3rd is better but unobtainable at present; the 4th is promised but some time away yet.]

As a general rule, a maker's name will be in the 'best' position, on the toe. It will only appear once. Anything repeated will be an owner's name, often obliterating the previous owner's name.

I can't see a maker on the plough.

The little grooving plane is by Mathieson of Glasgow, as is the bigger one and some others.

In their time they were the biggest toolmaker in the world - I guess all those Clyde-built ships had a lot of woodwork in them. They survived until 1966, but only until 1900 in Edinburgh, so yours must be between 1863 and 1900.

The big round that was made in York is hard to read in the picture - could it be "Varvill & Son York"?

If so, it would be somewhere between 1818 and 1840. There were several generations of Varvills making planes in York; the later ones marked Varvill & Sons are quite common, as their output was huge.

The oldest one is the one by Kendall of York - which dates back to 1818-30 ish. The profile looks quite unusual too.

Are you starting to like them a bit more now?
D

Andy, is it the supposed 'difficulty' in setting them that wooden planes are sneered at do you think, or is it that they

Andy thanks alot for that, I tried doing a bit googling but only really found the Mathieson stuff. I've always liked them just never got round to trying them. Ive had the little coffin one since I was 18. I sharpened it properly today. Do the blades have better quality steel at the front and cheaper stuff forged on?
Mark
You must log in or register to reply here.