I have a big Denbigh pillar drill, the K1 Series 2: 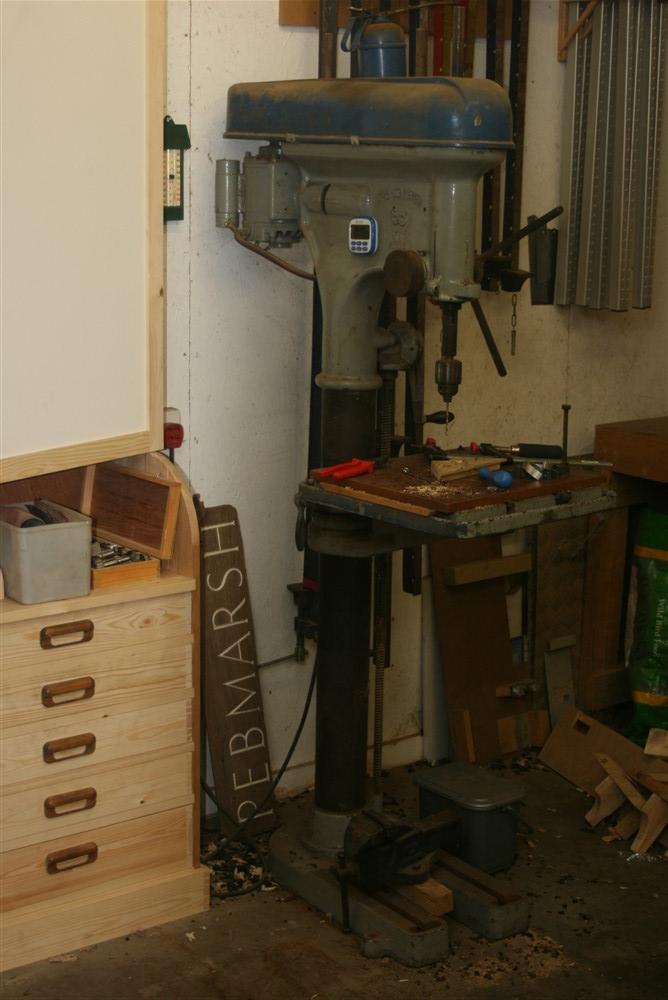 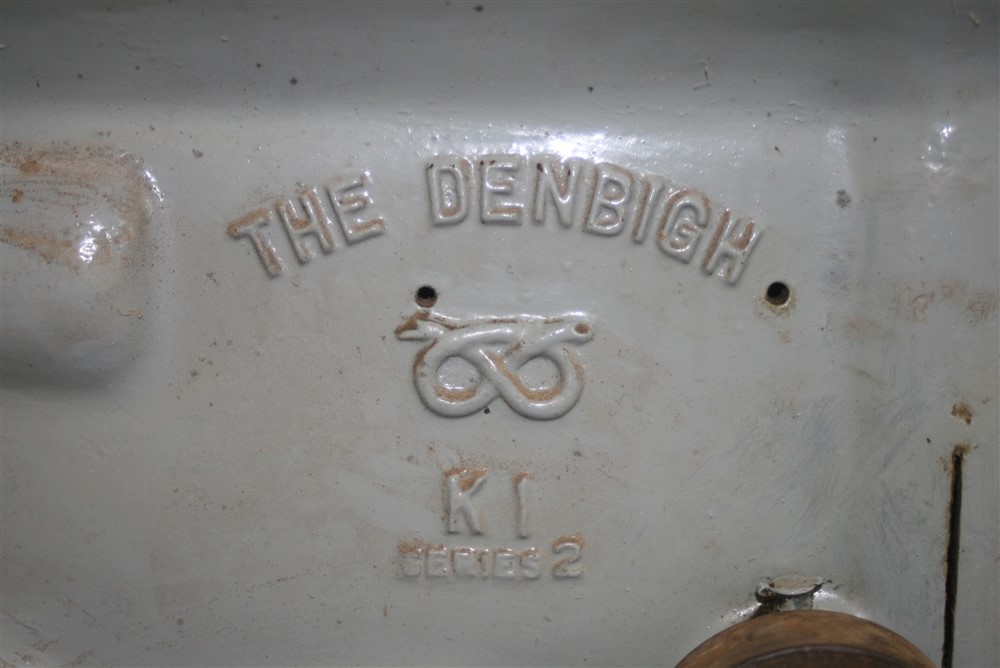 I have just broken the depth stop: 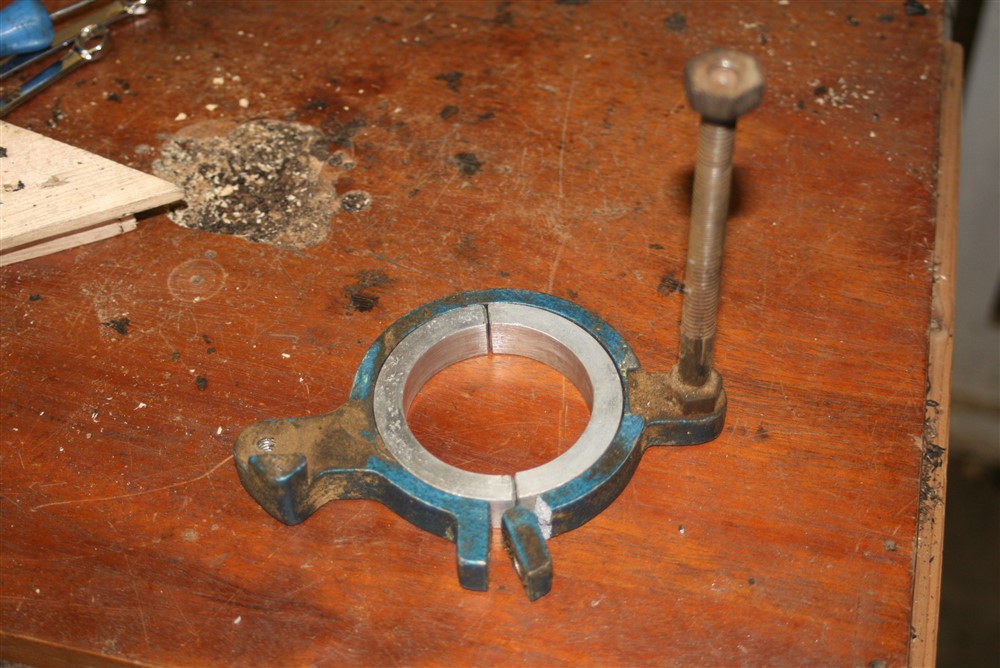 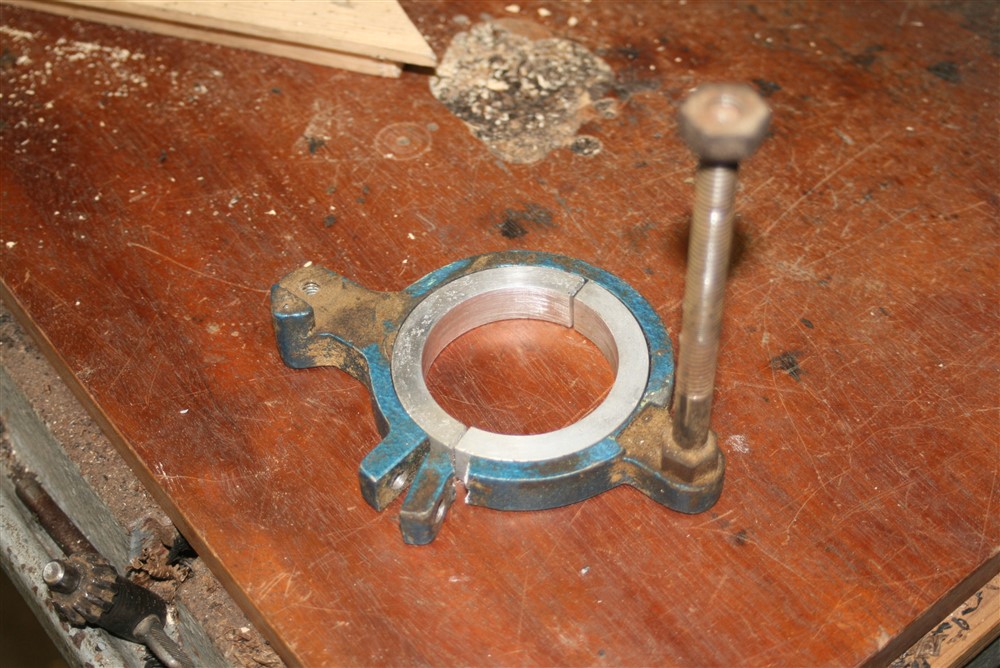 It's obviously not an original part, and it has never worked properly, but nonetheless it is a bit frustrating that I have just over-tightened it and broken the aluminium casting. That casting and the packers fitted around this threaded area: 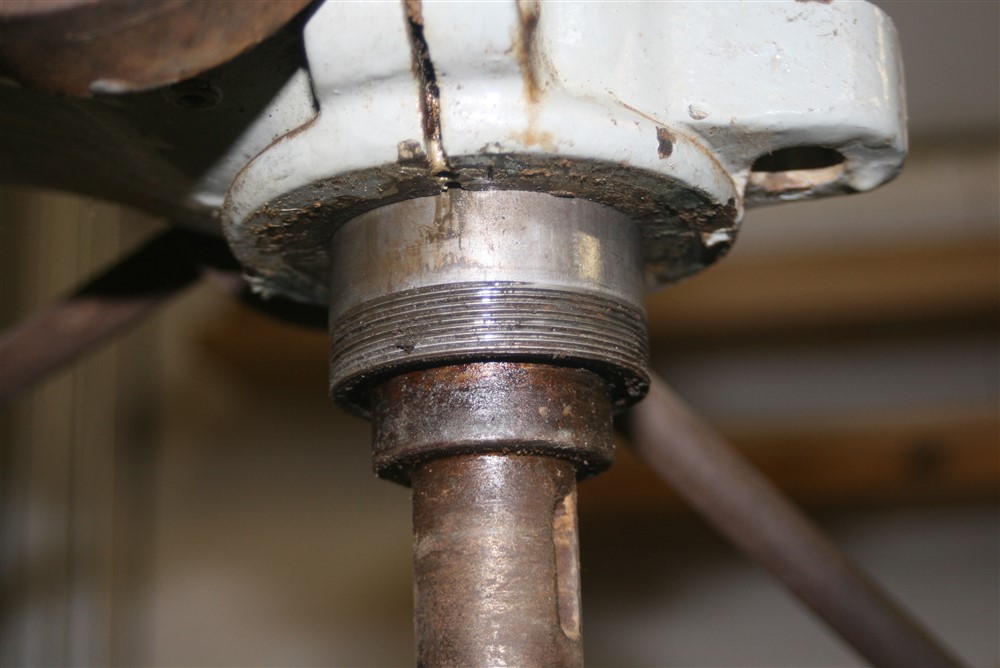 Does anyone have an illustration of what the original looked like? Did it used to screw onto the thread in the last photo?

That's the important stuff. Next, whilst we're talking about this machine, it has a non-original casting on the top which fouls the pulleys, so I have a little spacer or two to hold it out of harms way. Any advice on that would be useful: 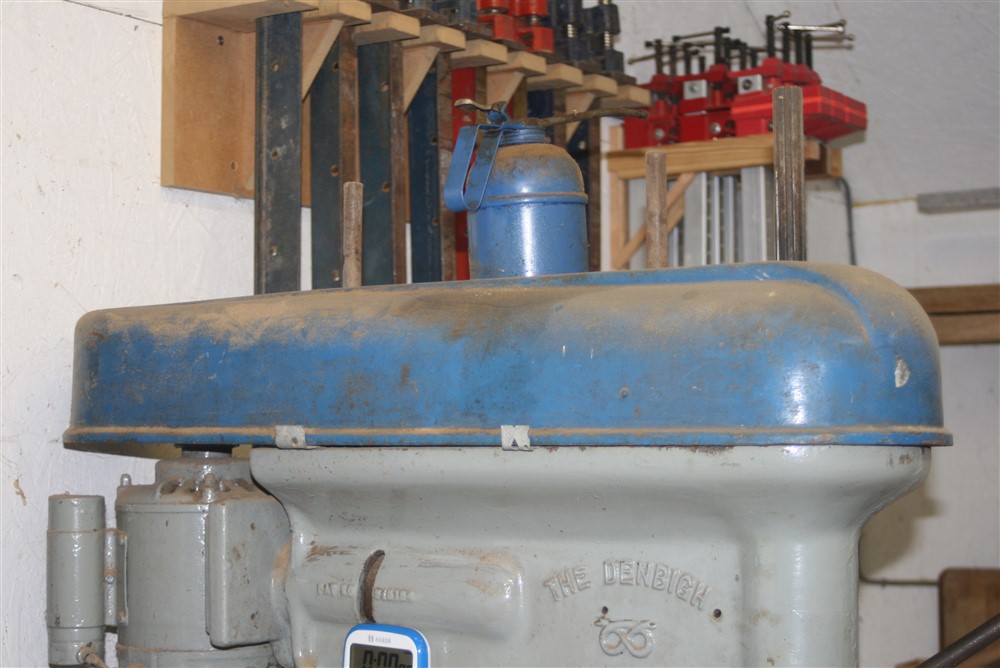 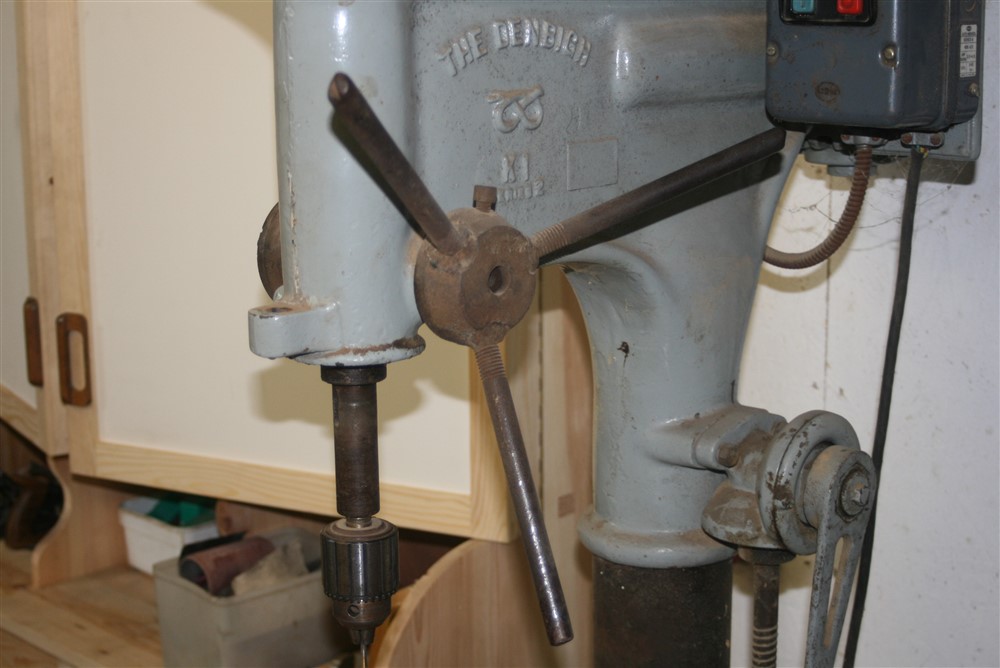 They look like they were made by a farmer, and annoyingly, just slightly foul the handle which raises and lowers the table. Again, suggestions of what to do are most welcome.

I thought that was a lovely looking drill when I saw it in the background of your workshop tidy-up photos, I didn't realise it was a Denbigh though, the only ones of those I've seen were the ones with exposed pulleys that ran on leather flat belts twisted around flat pulleys and didn't look quite so modern.

My first port of call with old metalworking gear is lathes.co.uk as there is usually something on there pertaining to some old machine you find, such as this which you may have seen already: 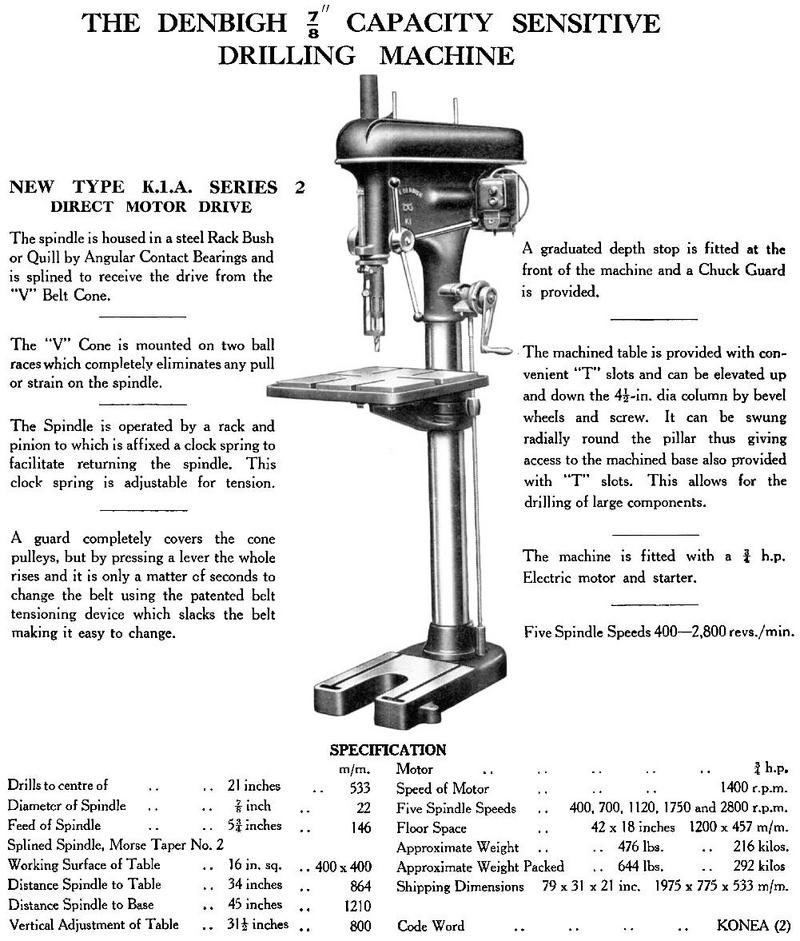 From the image, the top cover looks original/from another Denbigh but these top covers looks pretty much the same on all pillar drill of that vintage.

I can't really suggest anything for the broken part, for something new however possibly you could have someone with a lathe make you a part with a threaded bore to match the threads on the spindle, then put a spigot that's welded onto the side of the part to put the threaded rod up through the hole in the casting to allow you to put a nut on it and use it as a depth stop, if I understand it correctly. From the image above it looks like it was designed to have a flip-down guard on it too.

As for the handles... Bleagh... looks to me someone got sick of the handles unthreading or lost the originals and decided to weld those rods on there, functional but absolutely terrible looking. If you're happy with how the boss and where the rods come into it look you could always cut the rods down in length to suit and then maybe stick some balls on the end to make it more comforable to use. If you want to make the lot look better you're probably going to have to have the boss turned down to get rid of the welds with some new rods and balls on the end.

I wish we were nearer as I could probably help you out with it.

Interesting that the top cover looks original. I'll have to investigate more thoroughly and see why it is fouling. Maybe it is something to do with the absence of the lever to raise the guard, as given in the description.

I was afraid you (or someone) would say "turn it up on a lathe" for the depth stop. I might have to call in a favour from a friend

Have you got no plate you can laminate by welding?

I'm not clear as to what you are suggesting.

I would try a bit if jbweld if it were me- having no friend with a lathe or metalworking skills.

No, I won't be doing that. The thing that broke had been a pain for years. It would drop off every few months, inevitably in the middle of something critical. If I repair it it will be no better than it was before, which wasn't great. I'm going to see if I can fix this properly. Or at least, more properly.

I do have a couple of friends with the relevant engineering skills and kit. I'm at a party tonight with one of them......

Ah ok, I had assumed that it was ok before.

I suppose it is easy for me to say! :lol:

My lathe is one of the best investments I ever made I reckon, it was a hell of an investment for someone on £3.50/ph apprentice wages, lets just say it was near enough 20 weeks wages :lol:. I don't regret it one bit, many a hole has been gotten out of with it, not just my own holes either, it's been a decent little side earner occasionally.

If you have some, say 5mm plate, might need to weld it to make up the size, make a pair of them.
Draw the shape out and cut the outside, clamp plates together to grind a big honkin chamfer between and weld it up.
Drill out the hole in the center with many small holes, weld the same as before, or drill holes before this and fill with weld instead.

Ah, right. I've got plenty of scraps of 10mm plate and bigger, so that won't be an issue.

Here's the solution we came up with. My friend turned up a billet of aluminium about 15mm thick, cleaned up the thread on the spindle, and tapped two holes: 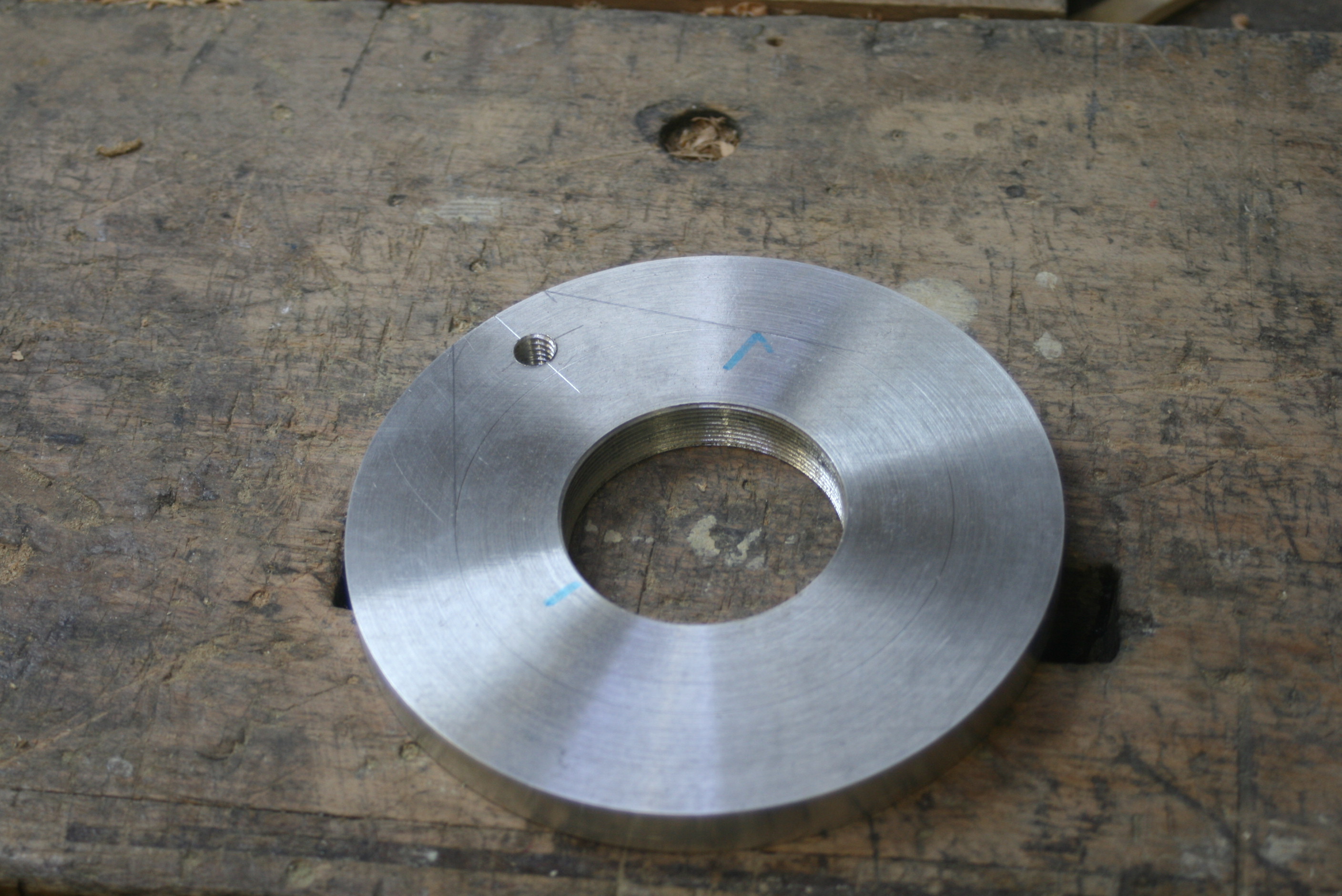 I then shaped it on the bandsaw, with a file, and on the belt sander: 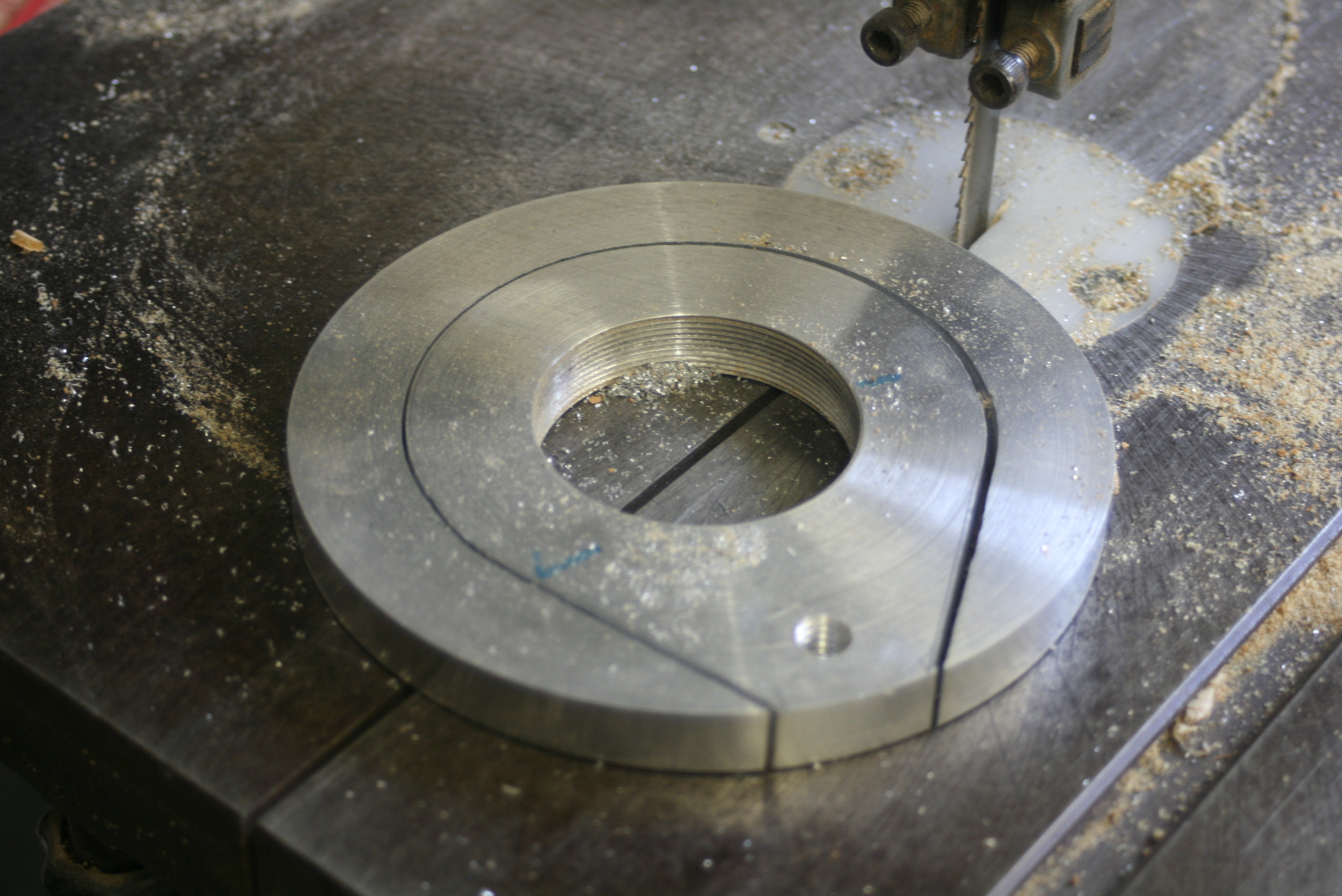 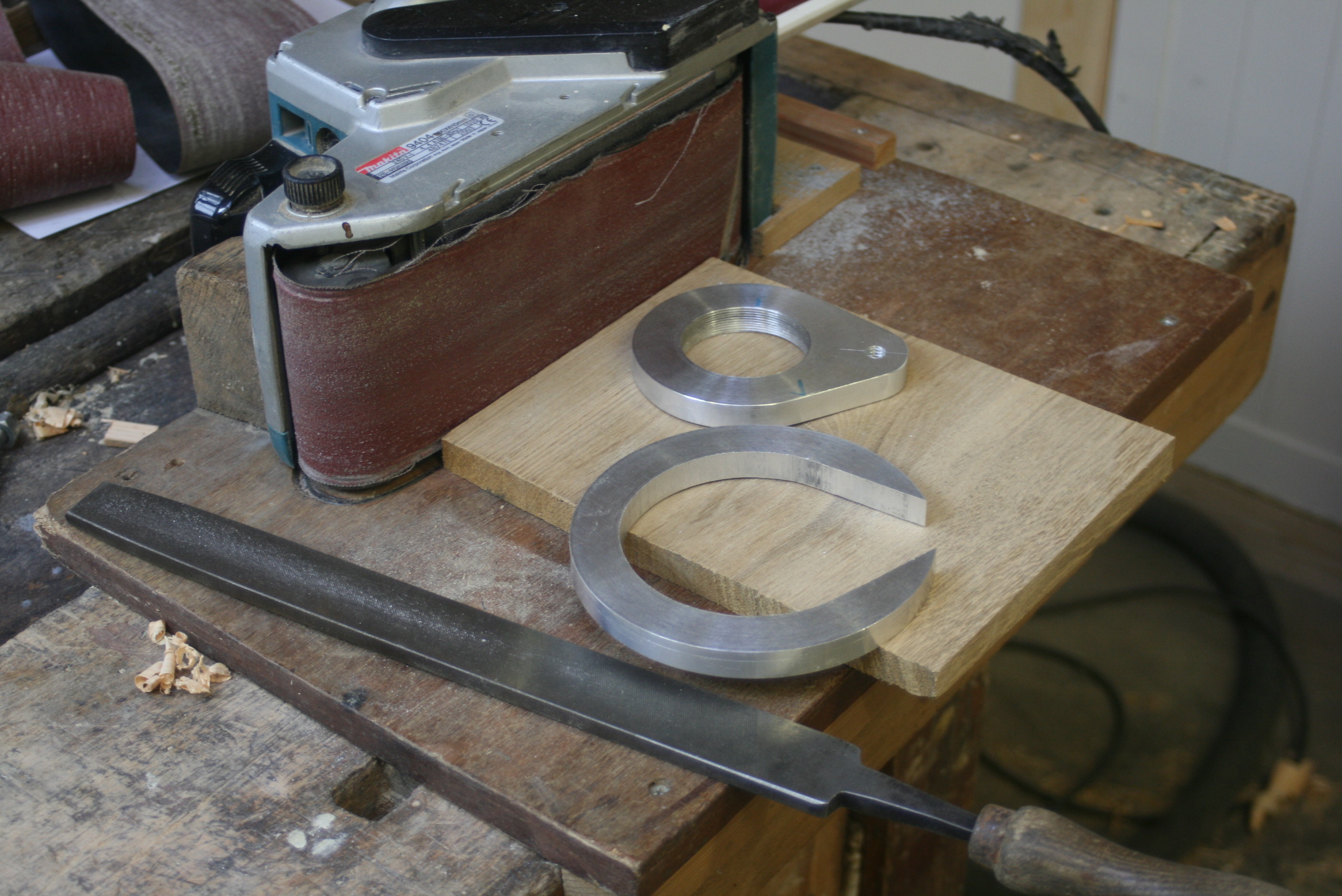 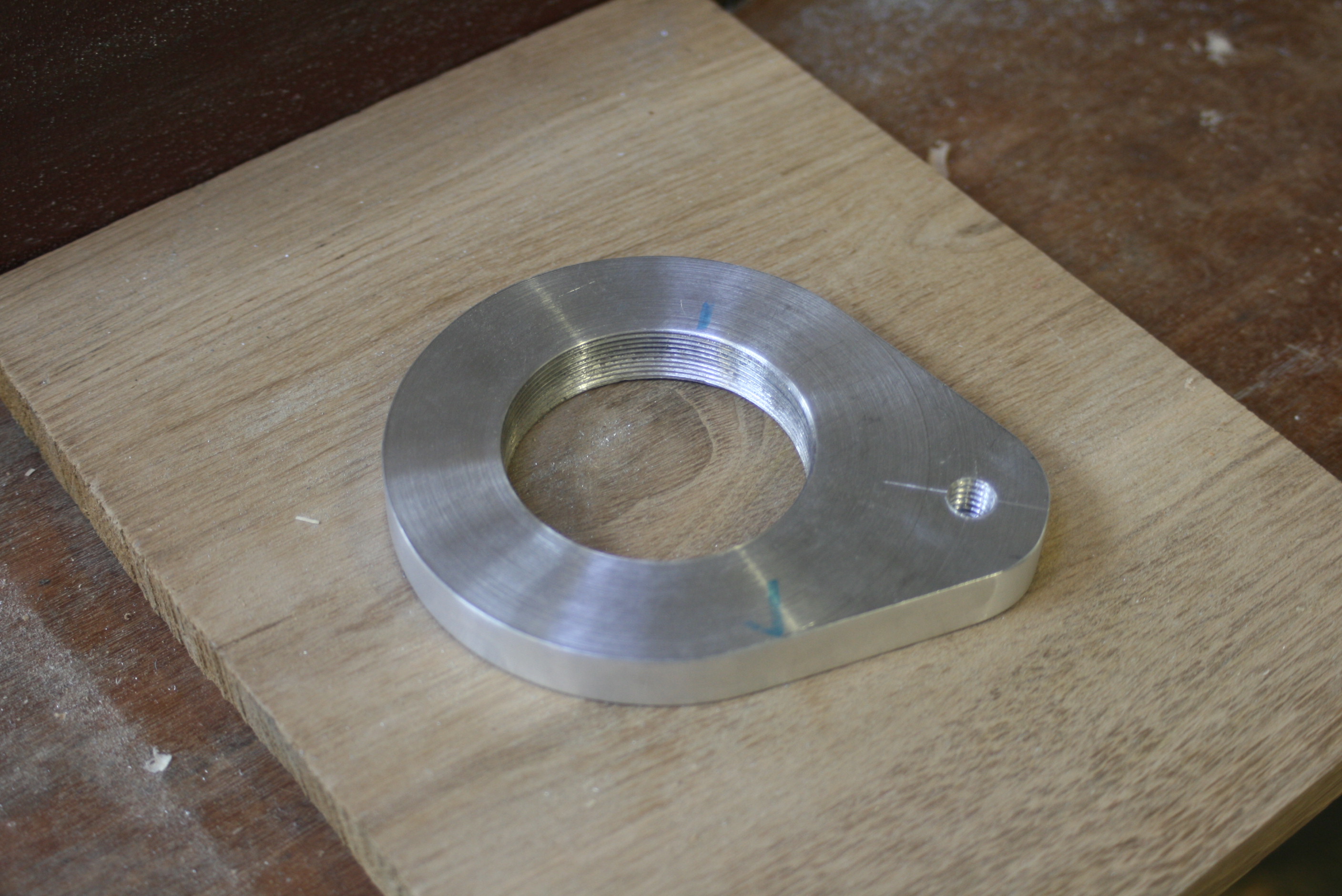 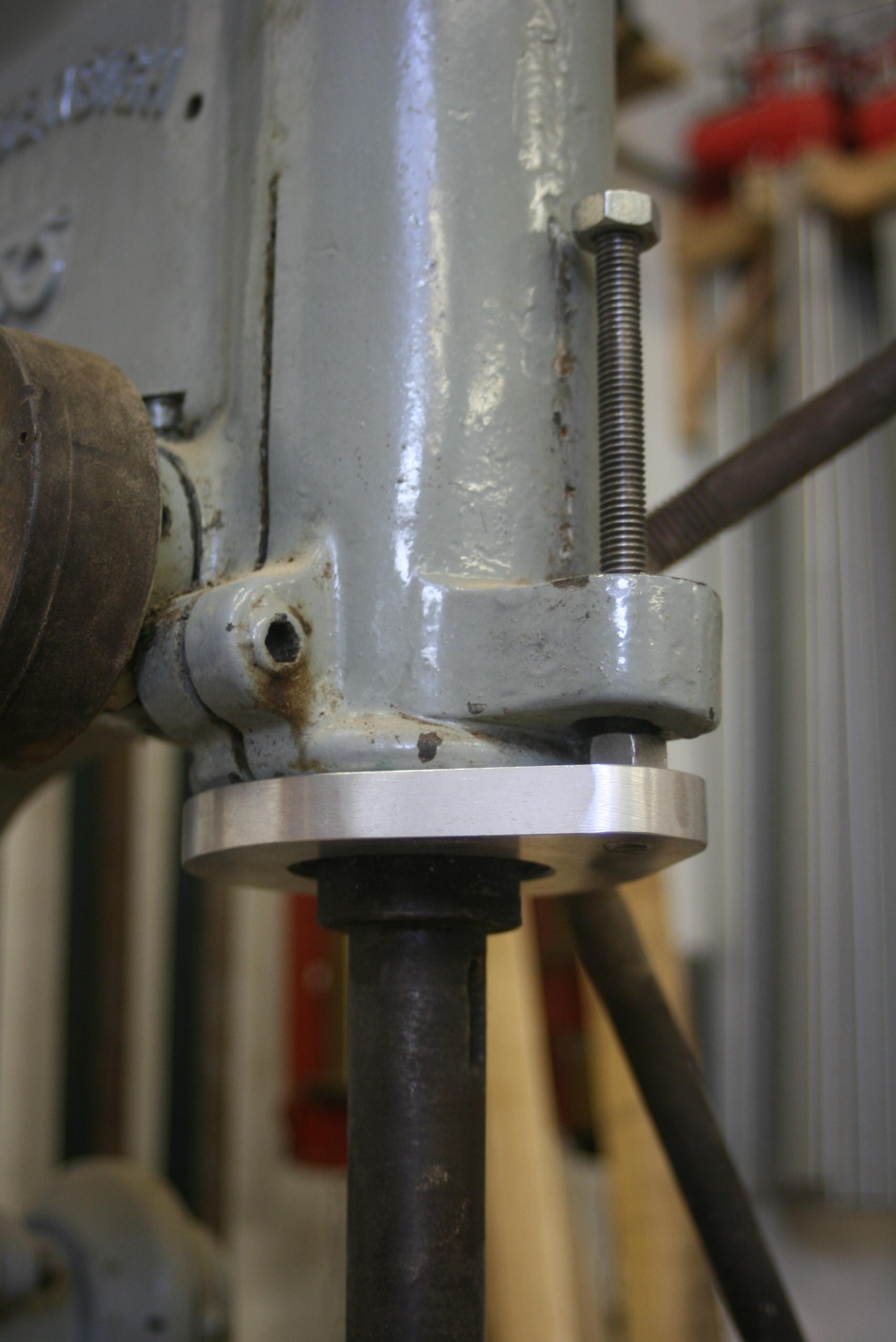 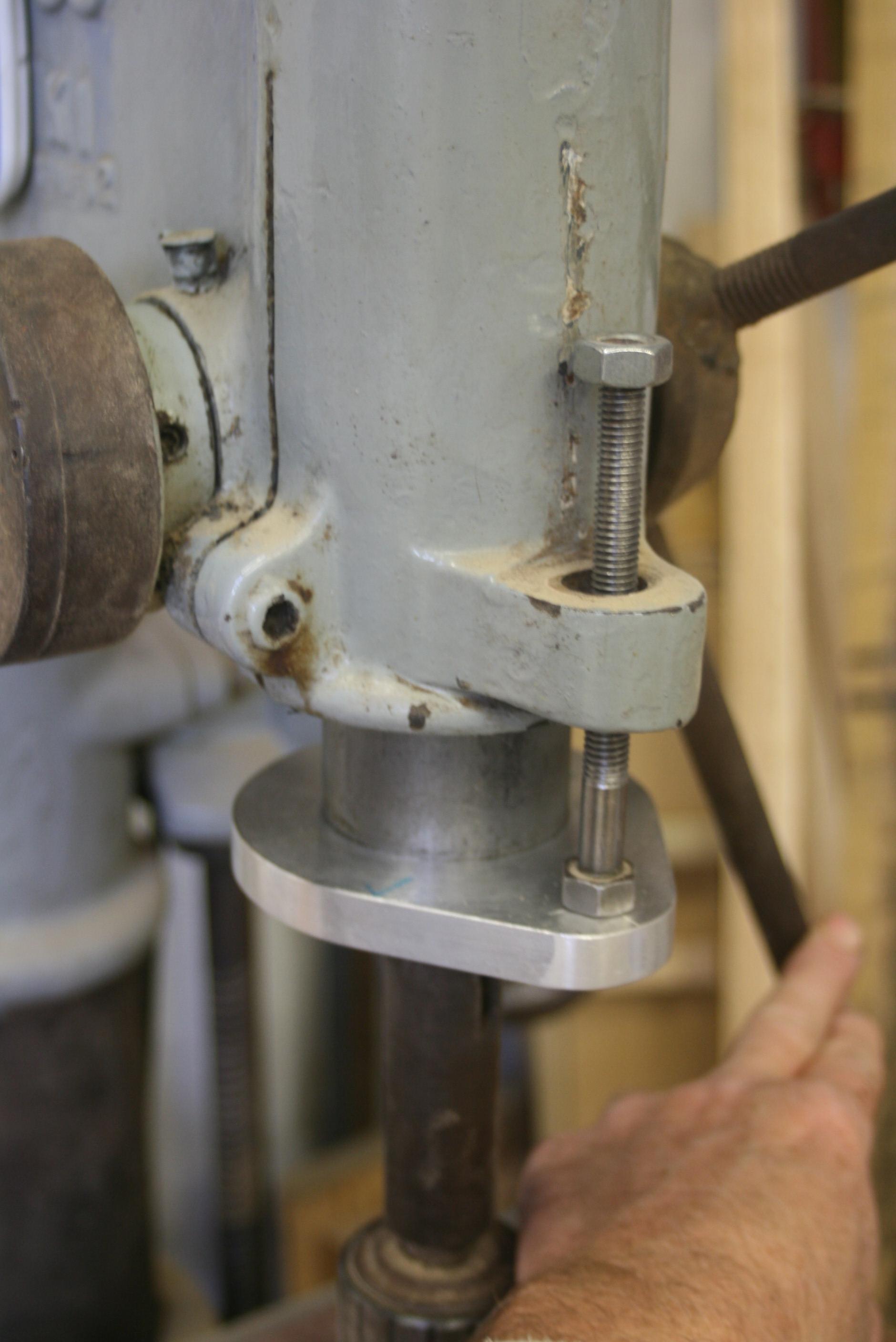 The nut is a bit loose and vibrates out of place quickly, and the threaded rod needs to be longer. Minor stuff which I'll soon sort. This is a neat and effective fix, and much better than what I inherited with the machine. I'm very pleased.

Neat fix Mike
Can you buy some sort of pinching nut like what is on some routers?
Is there a proper name for these?

I'll probably either find a tighter fitting nut (the one I had before was much tighter), or I'll use a second nut with a spring in between.

A nylock nut would probably last quite a while before loosening, then you've the other 99.

The problem with a nylock nut is that it would be such a schlep to wind it up or down to set the depth. It would probably need a spanner, rather than just flicking it around with your fingers.
O

Why not just use two nuts tightened against each other? A lot easier to spin them out of the way than a nylon nut too.

Yep, that's one of many simple answers.

My Startrite pillar drill has 2 knurled threaded "nuts" that lock together to set the depth of plunge. Perhaps your friend that made the alloy plate could turn you up something...? I've got a picture of them somewhere..... 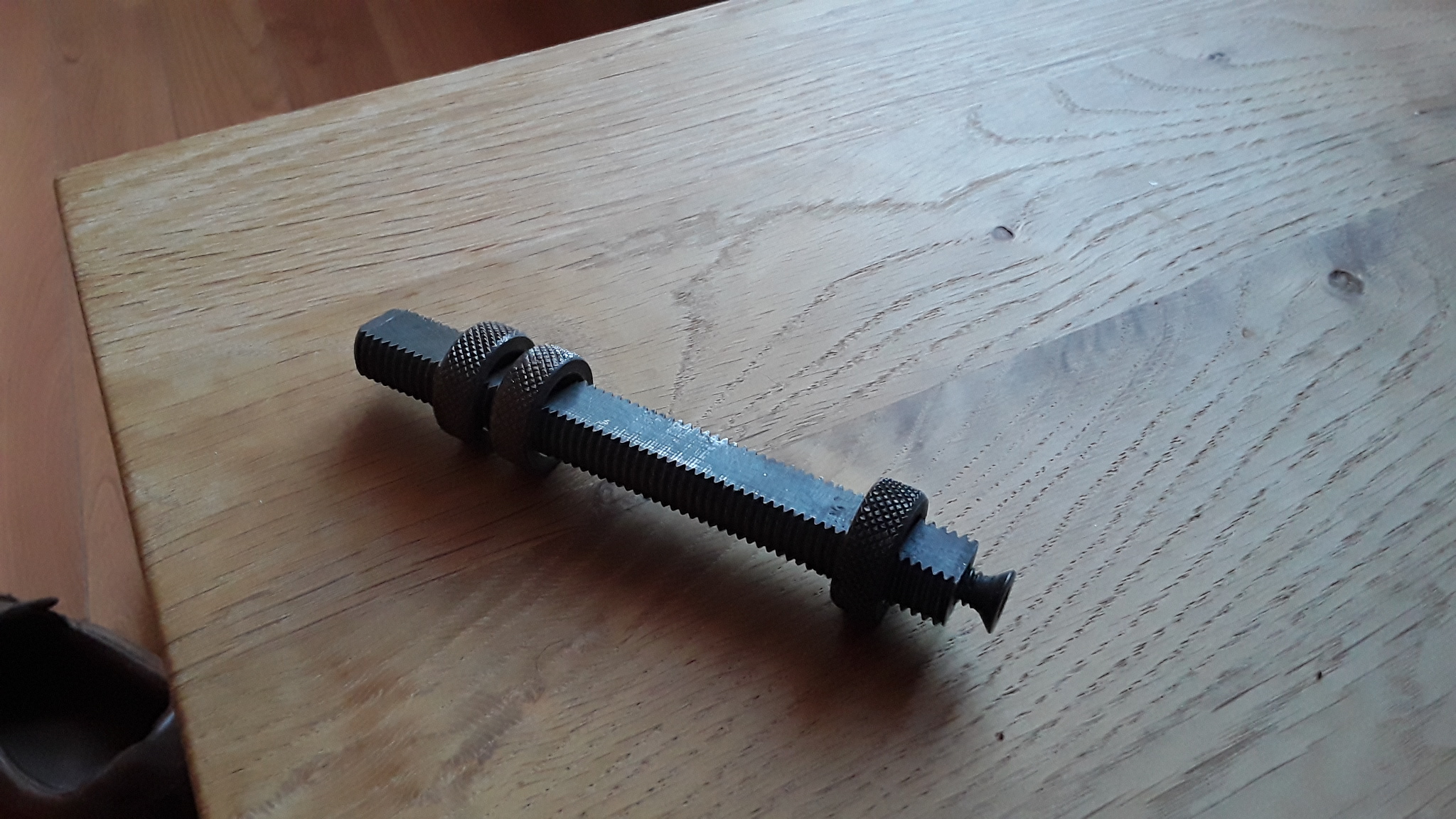 Yes most machines have these two knurled nuts that lock together. They are quite thin, so you don't waste the space of two whole nuts and are neater.

Looks like you are well set up to get bits like this done, but I'd be happy to run them off for you. Us oldies in purdah have plenty of workshop time now!