so, highest excess deaths since WW2 according to the BBC today, horrible, but not unexpected. They showed a chart showing spikes in the first and second world war, understandable, what I can't understand is a slightly smaller, but still significant spike around 1928. Can anyone explain this? My first thought was Spanish flue, but I think that was around 1918 / 1919. included the chart from the bbc site (doesn't show WW1 but did on TV earlier). All history lessons gratefully recieved 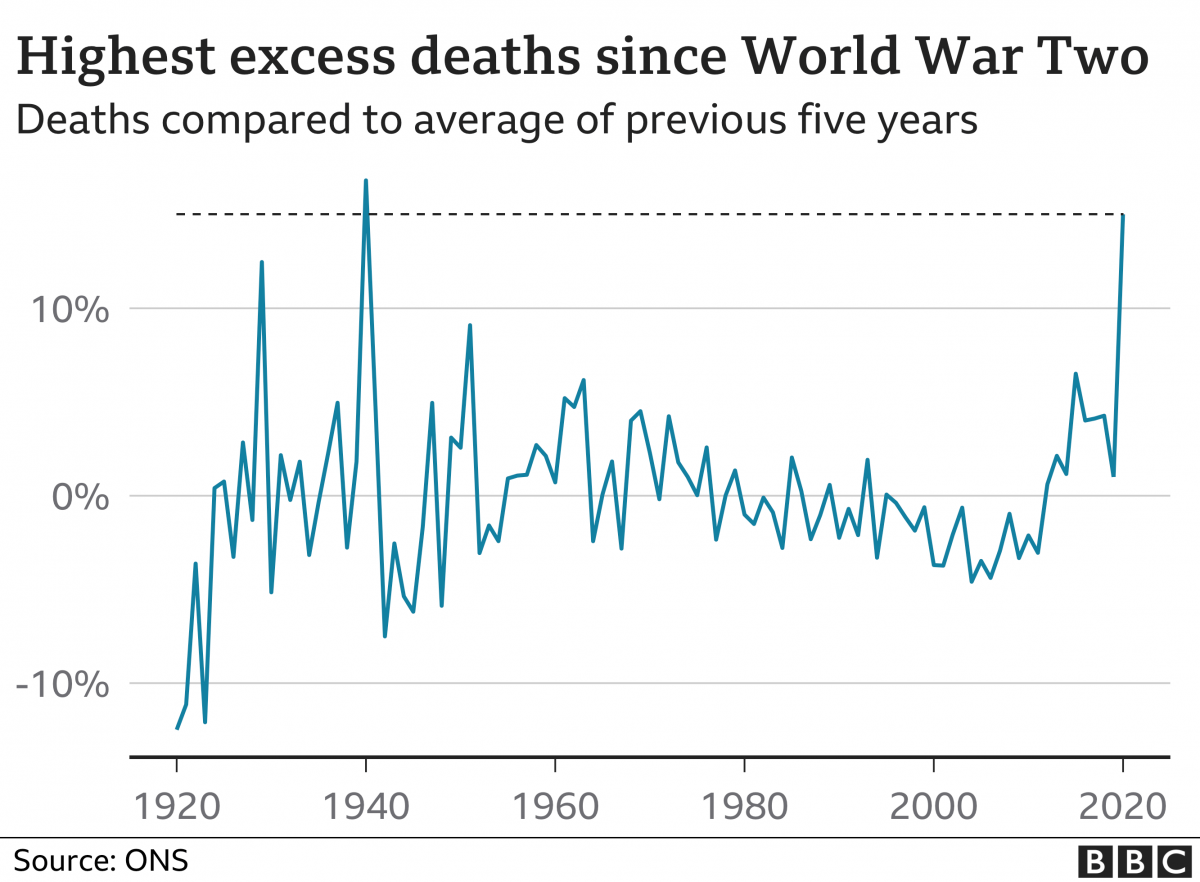 Happened in late 1929, effects wouldn't have fully hit the UK economy until 1930 and even then I'm not sure there's much statistical evidence of suicide, nor did it generate extreme poverty that would have resulted in deaths spiking. I'd be inclined to count that one out.
S

Then drops into a 'better than normal' year almost instantly.
S

Could it be a weather event? Prolonged cold and snow for several months.


Other than that TV was first demonstrated in 1928. Couch potato lifestyle sets in quick!!

There was a huge spike in births following WW1 so the later death spike may have been infant mortality.

There was another influenza epidemic 1928 to 29

Doug B said:
There was another influenza epidemic 1928 to 29
Click to expand...

seems odd that the UK and the US would both suffer from the same flu epidemic, I'm assuming that the majority of travel would be by boat so you wouldn't have thought it would happen in both places at the same time?
R

It seems hard to imagine now, but when he was twelve his mum and dad sat him and his brother down and said "would you like to be evacuated to Wales". His brother said yes, so my Dad did the same.

Not that that has anything to do with this thread

It seems to me that the graph is not really very representatively helpful, it shows the percentage increase, that’s all well and good but it doesn’t say where or how many, is it the UK?is it the world? Or a little village in Hertfordshire?
T

Cabinetman said:
It seems to me that the graph is not really very representatively helpful, it shows the percentage increase, that’s all well and good but it doesn’t say where or how many, is it the UK?is it the world? Or a little village in Hertfordshire?
Click to expand...

bbc so i assumed it was uk, now not so sure

it was certainly due to infant mortality
C

I have just been watching tonight‘s news on the BBC with very similar graphs of deaths and I am extremely sceptical, but are they any worse than any other news organisation? They all love to exaggerate.
They based their graphs on a previous five year average, I can guarantee that showed what they wanted to show.
C

Skingdom said:
it was certainly due to infant mortality
Click to expand...

But wasn’t infant mortality always terrible in those days? Sorry I don’t really know a great deal about Spanish flu and the ages of victims. Ian
U

The graph shows the change in standardised mortality rates (little adjustments for the structure of the population) for England & Wales, which have some of the most closely analysed mortality in the world.

> the later death spike may have been infant mortality.

Infant mortality occurs mostly within the first few years of life, and you reach the point of lowest mortality at about age 10. You then start to accelerate up quickly as testosterone kicks in!

> you wouldn't have thought it would happen in both places at the same time?

Remember the major population centres in both countries were huge maritime cities with a roaring intercontinental passenger traffic that covered the Atlantic in a week, just enough time for the whole boat to become infected.

> They based their graphs on a previous five year average, I can guarantee that showed what they wanted to show.

These graphs are all derived from analyses done by the Continuous Mortality Investigation of the IFOA (Institute & Faculty of Actuaries), and have been released weekly since March. This one is newsworthy as it covers 2020 to year end. I imagine five years is enough to show the natural variation, but not so many that it makes it impossible to read.

Mortality improvements (changes in mortality rates, as opposed to the rates themselves) are slippery things to estimate. They require an order of magnitude more data, and as you can see from the graph even at the best of times are extremely volatile. They are usually the sum of all the different things that are operating on causes of death in the population: on the one hand, better cancer treatments, medicines, and so on; on the other, continually worsening lifestyle factors like obesity and alcohol.
You must log in or register to reply here.
Share:
Facebook Twitter Reddit Pinterest Tumblr WhatsApp Email Link