I have my dust extractor located in an adjacent room. The intention is to automate the powering on and off of the extractor at each machine in the ducted system.

The electrics are going to be hard wired to each blast gate with thin bell wire so the DX powers in when the blast gate is opened and turned off when the gate is closed. The bell wire is taped to the back of the 4” pipes and is not seen anywhere. I have today installed all the wiring to seven blast gates and the system works perfect.

The total cost of the complete kit of components is a tad shy of £30.

The DX is a 1.5hp induction motor and as such solid state relays are unsuitable, so a twin pole contactor relay was used. This relay will switch up to a 3hp motor.

Here are the components, total about £30

the system works by utilising 12v micro switches on each blast gate that trigger the relay when the gate is opened. All the 12v switches I have wired in parallel, but could equally be wired in a radial, or combination if that was more suitable for your space. 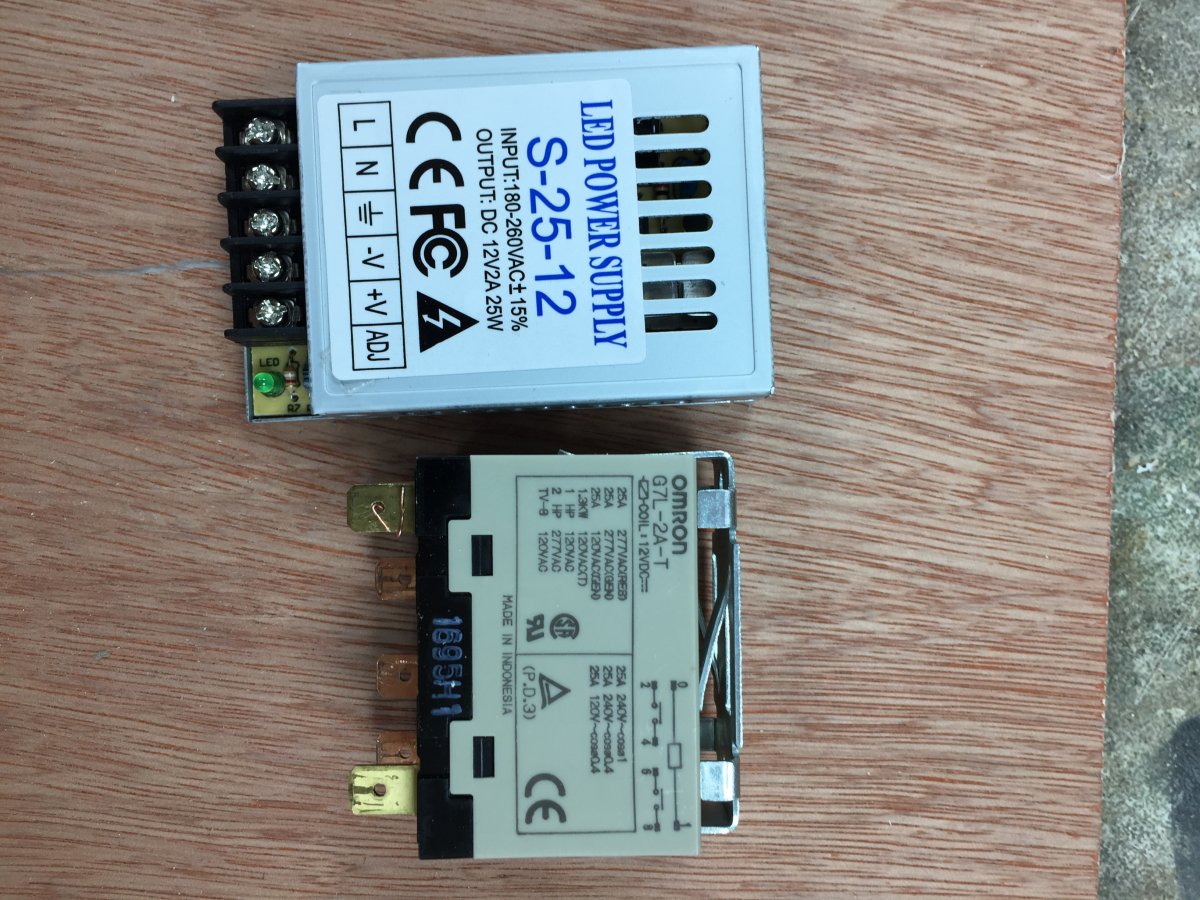 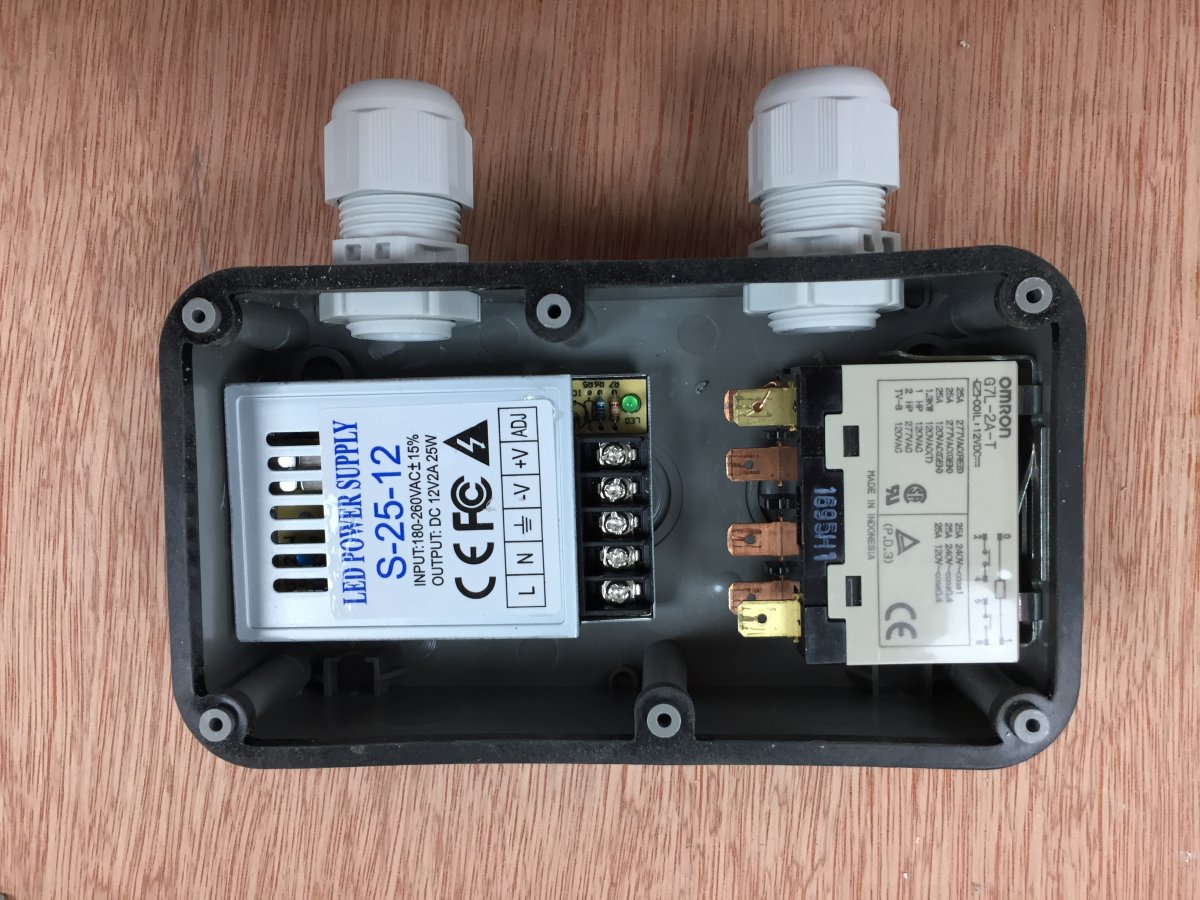 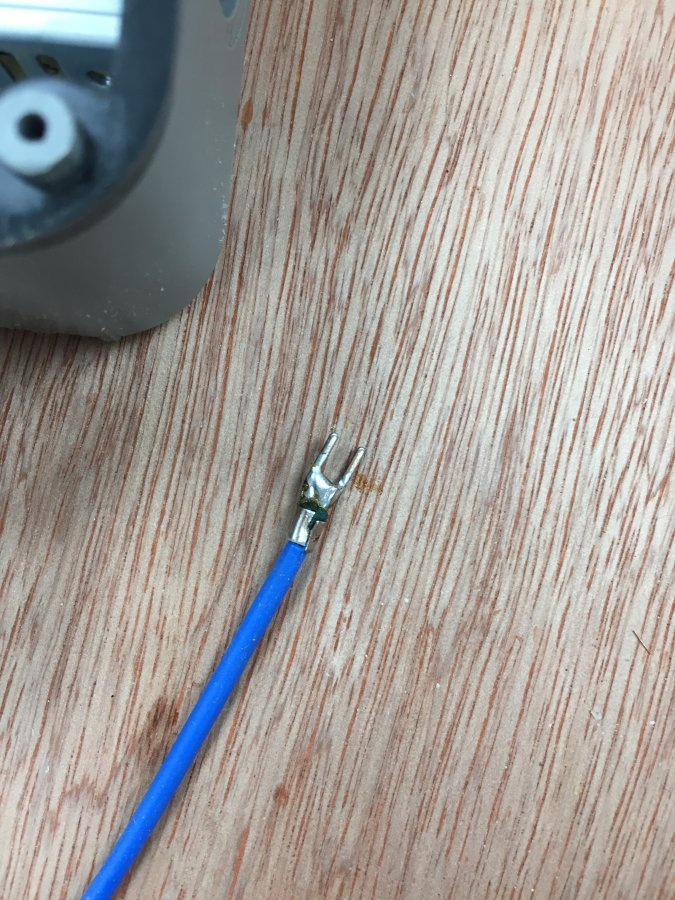 All terminals have been soldered and shielded in mine, but well fitted insulated crimp terminals would work 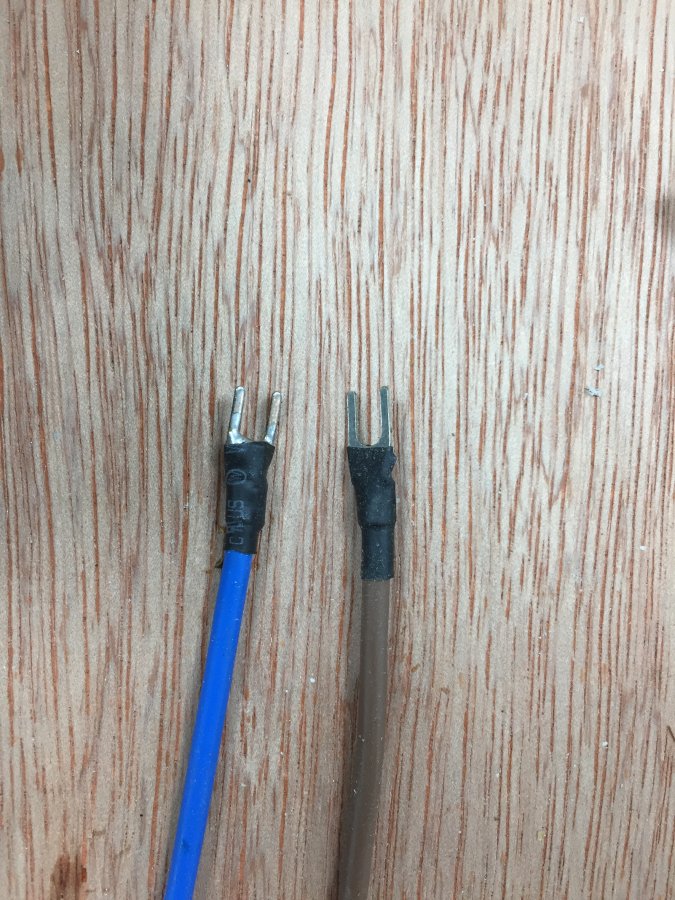 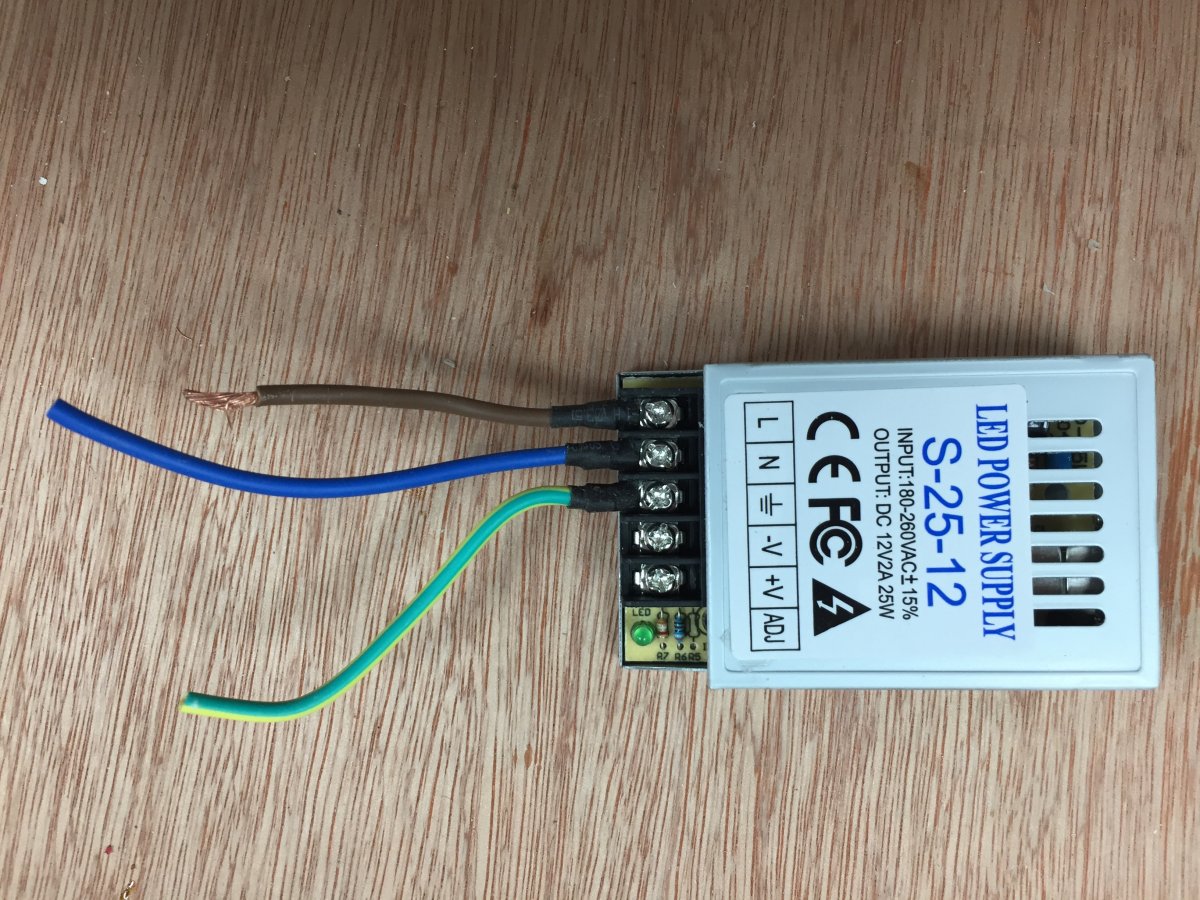 Plenty of room in the enclosure. All terminals soldered and insulated except earth which is wago. 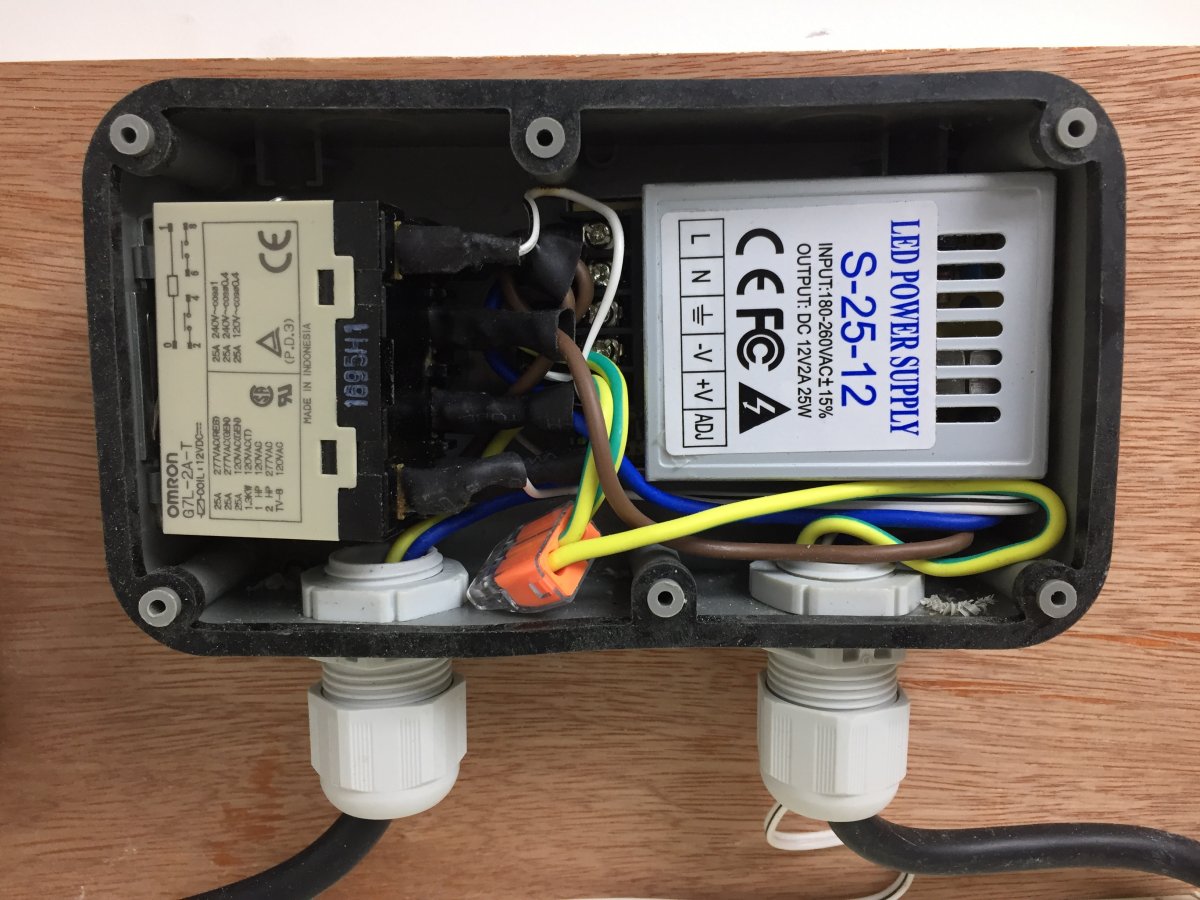 I ran the transformer for four hours, then removed the cover, there no noticeable heat generated. Will check in the morning. 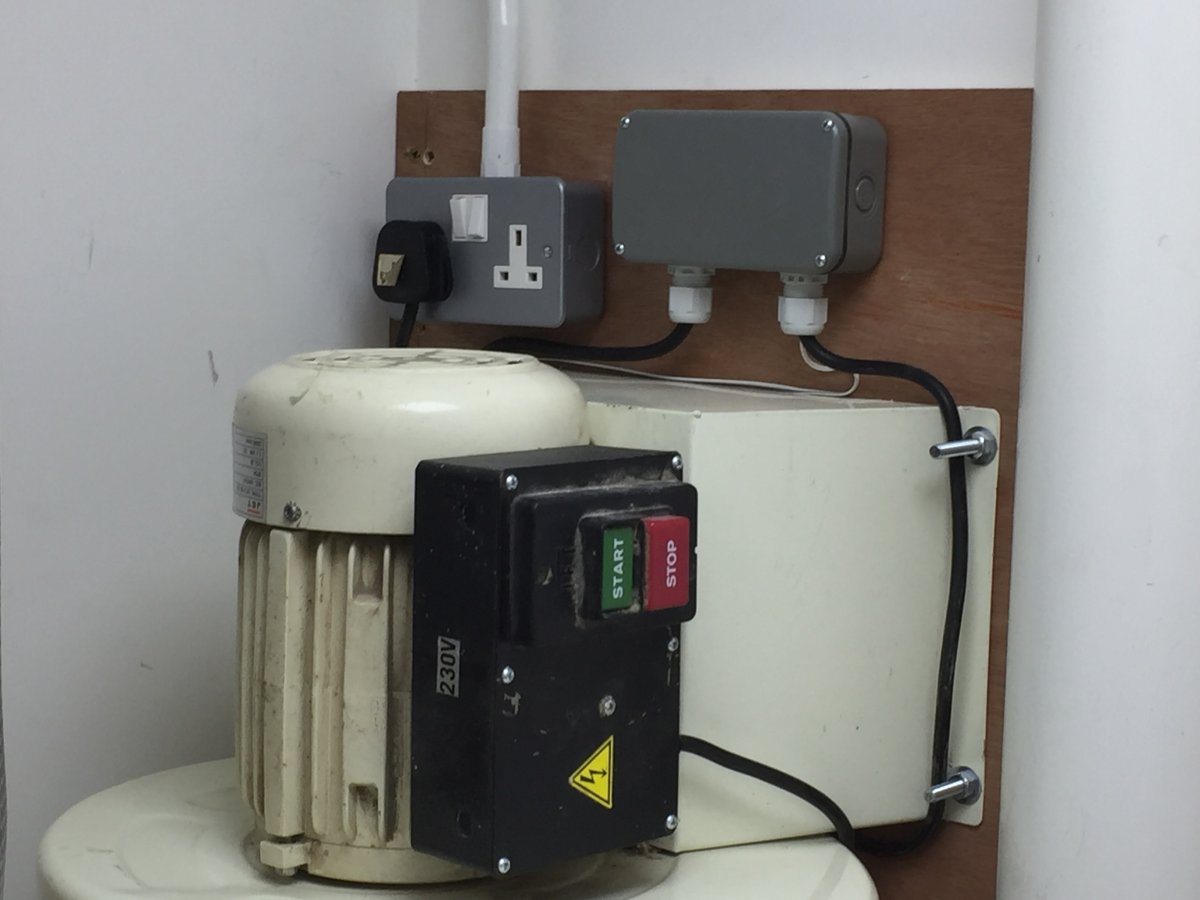 Control box fitted on DX mounting board. I have use a switched removable plug so I can guarantee electrical isolation if I need to put pinkies anywhere near fan unit.

for now I have put a standard light switch at each machine as the micro switches haven’t arrived yet. This proves the working state of the system. You could use missile switches so it doesn’t get turned on accidentally. There is only one pole of the 12v circuit in the workshop so there is no danger of shorting anything.

I have drawn up a wiring diagram, it’s not overly complicated. 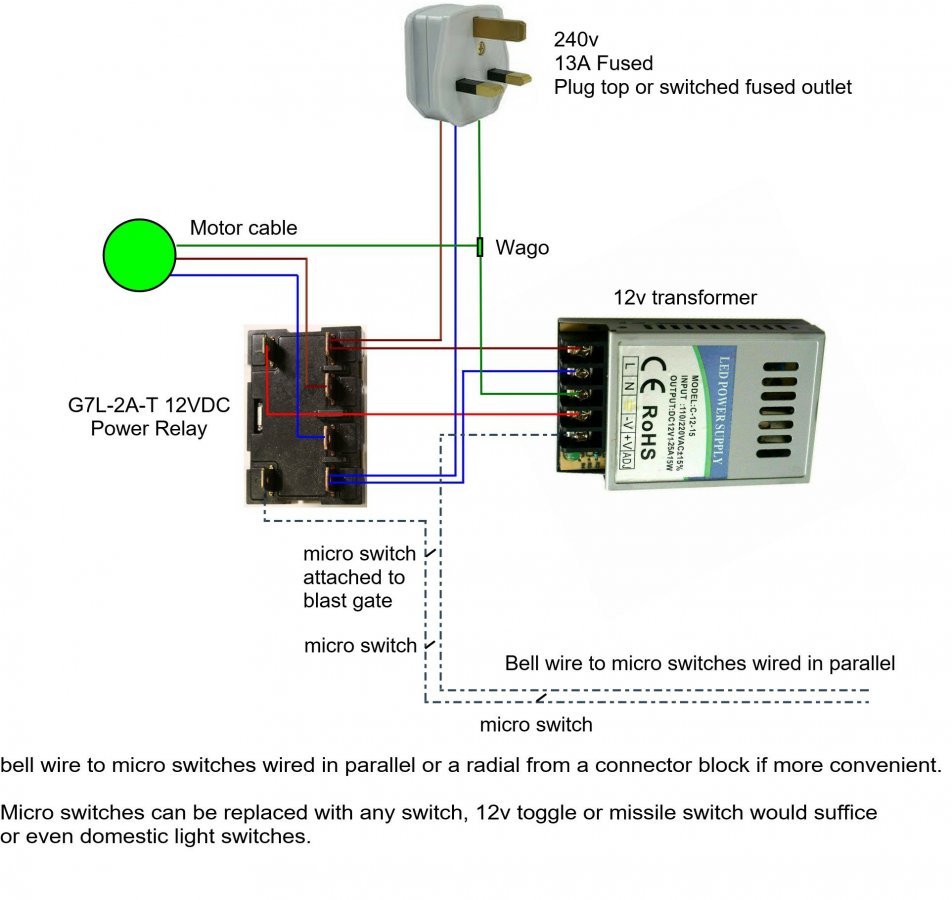 Not a single pic of a blast gate and its switch. Consider me unsubscribed!
C

Brilliant, just what I needed, thanks for your patience with an electrical zombie!

DBT85 said:
Not a single pic of a blast gate and its switch. Consider me unsubscribed!
Click to expand...

Blast gate switches still to arrive. Will fit them and picture how they’re converted to auto.

I thought you already had the microswiches?

Charlie said:
Brilliant, just what I needed, thanks for your patience with an electrical zombie!
Click to expand...

Just take care to follow the principle of the wiring diagram and make sure everything is insulated, You‘ll be fine.

It’s surprising how handy low voltage relays can be in workshop automation. I use them on my CNC setup to control by the computer programme automatic dust extraction or turn on laser power. Understanding the concept of what they do lends them to many tasks.

They can be used safely to control low voltage power switches near water or children. The Fostek solid state relays are cheap and can be hard wire switched remotely using a 3v battery or 5v from USB. Old phone chargers are an excellent power supply, the old Nokia ones are 5v and perfect for the job. Most households have a spider drawer of old chargers and cables ‘just in case we need then again’ long after the devices are dead.

DBT85 said:
I thought you already had the microswiches?
Click to expand...

As a matter of interest would you put two blast gates on a table saw, 1 off the back, the other off the guard. and if so, would opening them both cause a problem assuming that you had switches on both gates?

They would both just be calling for the extractor to turn on so it wouldn't cause a problem. Once it's on you could open every gate if you wanted.

I don't yet know what I'll do for mine as I don't even have the saw yet, but I'll just use one gate. You'd never need no extraction under the table, but you might not need any on top I suppose, so you could just put a gate on the top that doesn't trigger the extractor.

Assuming4tou don't want any on top because you removed the guard maybe for a sled, I'd still be trying to rig something up to offer protection and extraction. Magnetic hose joints might come in handy there.

Axminster do a 100mm flange with a 63mm branch coming off it for the guard (or under and over router table). a gate extractor side would negate having two, but there will be an open outlet if guard is removed, which could have a blanking plug Popped in for those occasions. As DBT85 says, any or all will turn it on without issue, as they are in parallel.

Blast gate switches have arrived, hopefully get them fitted this week, although have to clear the kitchen ready for major house works, load bearing wall removal and full kitchen refit.

I know Mrs’s priorities, and it isn’t switches.

Give her the sledge and tell her to have at it then!

Maybe my wife is the odd one out

DBT85 said:
Give her the sledge and tell her to have at it then!

Maybe my wife is the odd one out
Click to expand...

How about you tell her?

I’d stand well away from the sledge though.
F

Location
Up to my neck in it in Sandy, Beds

Nice job. I was going to do mine with just a master on/off - but I like the auto on/off solution. Where did you get your components - RS?

bowmaster said:
Nice job. I was going to do mine with just a master on/off - but I like the auto on/off solution. Where did you get your components - RS?
Click to expand...

Links to all components in the first post. It may not be obvious, but click on the red writing for each component description and it will take you to source.

you can do a hybrid setup, manually switch on with as many switches as you like positioned where you want without actually linking them to the blast gates.
Last edited: 28 Oct 2020
T

Niffty idea. Simple yet effective. At first I thought microswitches weren't the best switch to use due to dust ingress but then remembered my little Record bandsaw had them. I thought Reed/ Magnet switches would be easier & neater too but the NO or NC (not both) option is awkward when MS's have C/NO/NC. The price difference too makes them a non-starter (no pun intended).

What are you doing for mounting plates, making your own? Look for cheap options on GEV / Commercial Catering Spares or such like. GEV have a better website & even better catalogue. Some come with the tiny threaded rods tacked on. They do a universal MS kit with loads of different size & shaped actuator arms. I had all these bits n bobs on my van back in Brum.. I miss my van.. it was full of handy, clever stuff .

Thanks for the idea.
Togs

I’ll take some pics this week. It’s now fully working, is a superb setup. Micro switches are attached to the rear of the blast gates with super glue, clamped with a spring clamp whilst drying, which are activated by the lifting L part of the gate acting on the roller arm. The switches are daisy chained in parallel. The wiring diagram above shows them making the circuit between low volt supply positive output from transformer and low voltage positive terminal input of relay.

You know if a blast gate is left open as the extractor will be running. If all the gates are closed, it’s off. In the past I have wondered why the tool I was using wasn’t clearing the dust and chips it should have done, only to realise later another gate in the workshop was open.
M

C'mon then where's the pictures???
W

@Sheptonphil Great information, thanks for taking the time. It would have been even better had I found this when I was doing mine. I ended up with pretty much the same setup so it's nice to know someone else has success with the same methods. Cheers!

Walcote said:
@Sheptonphil Great information, thanks for taking the time. It would have been even better had I found this when I was doing mine. I ended up with pretty much the same setup so it's nice to know someone else has success with the same methods. Cheers!
Click to expand...